Chuck Palahniuk (pronounced pal-a-nuck) gave a reading tonight at the Public Library. I had planned on showing up, finding my friends Liz and Steph, and settling in for a good reading by an author I really like.

Well I showed up late. And there were a crapload more people than I had expected. And I wasn’t ever in a position to even attempt to find Liz and Steph.

I should take a few steps back. You may know Chuck Palahniuk best as the author of Fight Club. And while the movie’s great, the book is equally good. If you liked the style, I encourage you to pick up any of his other books (I would recommend Survivor or Choke, and avoid Invisible Monsters). Great voice, great style, and reads like lightning.

Upon arrival, everyone is handed a bookmark. Mine is white, and it indicates that I am part of the “overflow” crowd. There was also a number written on the bookmark, to indicate when you arrived. After the reading, people could line up for autographs based on that number.

Having arrived too late for a seat in the main auditorium, I am directed to a smaller room a bit farther away, complete with a large monitor and two speakers. A big group of us end up watching the reading remotely. 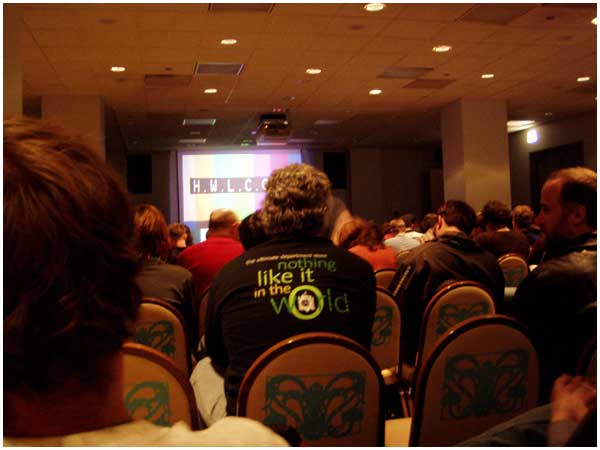 He did not read from Diary, despite the fact that this is the most recent book (and the one he’s technically promoting). Instead, he read exceprts from a short story called Guts.

Let me say this: I’ve been to my fair share of readings. And this was by far one of the most explicit, most uncomfortable, most disturbing readings I’ve been to. I was incredibly affected physically by the sheer act of this man reading words out loud.

The immediate experience I think of was when this girl Jenny read American Psycho to me. But even that easily pales in comparison to hearing Guts read out loud. I crossed my arms several times. I crossed my legs repeatedly. Other guys did the same. During the reading, several people simply got up and walked out. One person (in our overflow room) fainted.

There were some rumors that the fainters were plants. But I must say – I was extremely uncomfortable at several turns. And I really believe people could have (and did) faint.

As disturbing as the story was, it was quite amazing to see one person’s words have such a visible (and visceral) affect on people. If you’re able to catch a reading of his, I highly recommend it. If he’s reading from Guts, it’s probably not something you want to take the kids to.

He had a lot of great things to say, about his own writing and writing in general. He’s a really well-spoken individual, and really just a blast to listen to. He’s someone who remembers all the good stories people tell him, and he’s equally good at retelling them.

He mentioned that, while writing his novels, he listened to the same album over and over again. I found this bit of trivia really encouraging, as I tend to do similar things with songs. For his newest one, he’s been listening to a lot of Pink Floyd. For Fight Club, I believe he listened repeatedly to NIN’s Downward Spiral.

On stage, he had with him a big cardboard box filled with fake, bloody appendages. He said that he had a ton of these things, and they were great fetch toys for his dog. He talked about how he loved to be in the park with his dog, throwing an arm or leg around, only to have a Sunday morning couple walk by and spot this bloody limb in his dog’s mouth. He quickly stated that, soon after, the couple was laughing fit to burst.

During this description, I was reminded of Fight Club, where Tyler Durden holds a gun to a shopclerk’s head, threatening to kill him. Instead of firing the gun, he asks what the clerk wants to do most in life… and vows to return in six months. If the clerk isn’t pursuing his dream fully at that point, Durden assures the man he’ll kill him.

From a rather disturbing/bleak situation, Palahniuk is seemingly able to find some positive. I guess I really like these moments in his writing.

During the Q&A session, for anyone who asked a question… he dug into the box, and gave them a fake, plastic appendage. He kept taking questions until the limbs ran out. 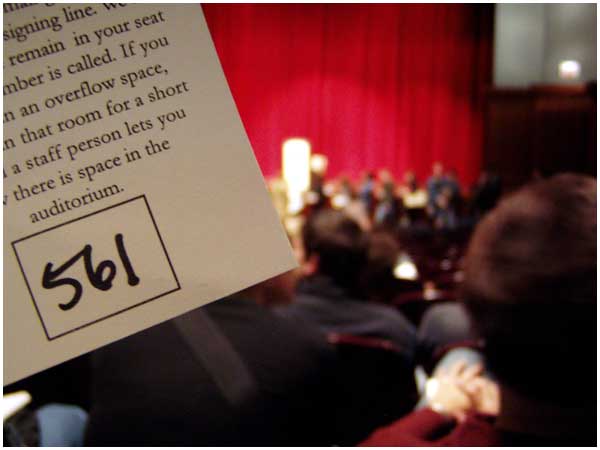 So I mentioned that we all got bookmarks, right? Listing the order in which we arrived?

I hung around after the reading, hoping for an autograph. My bookmark showed me as the 561st person to show up. 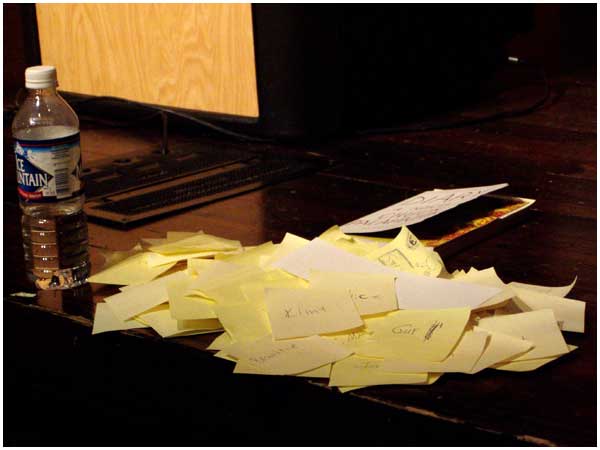 Finally, after an hour and a half, I’m in line. For everyone who wanted something signed, a library worker wrote out your name on a post-it, and put it on the front of your book. This is a picture of all the discarded post-it’s, near the end of the evening. 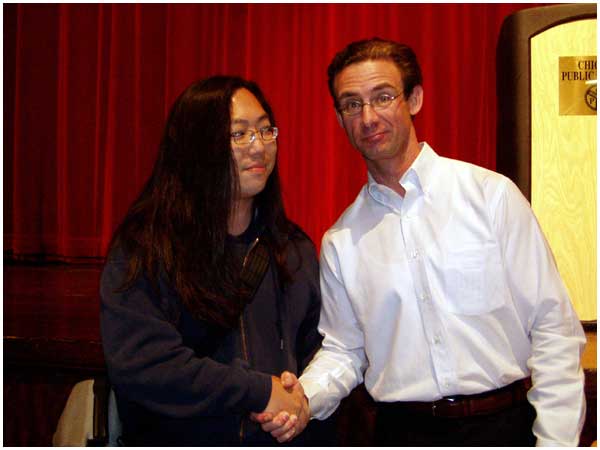 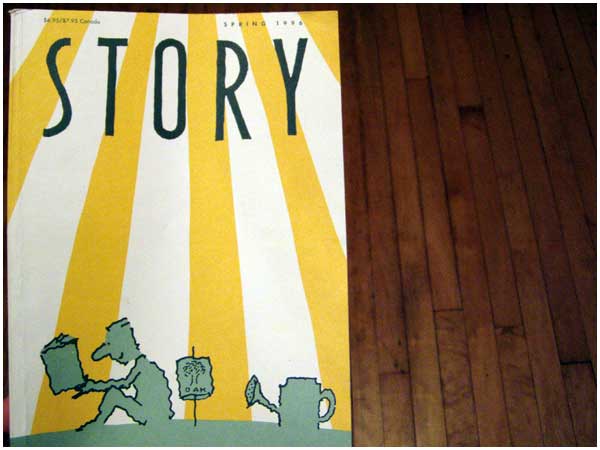 Alright, so I’m a total geek about this. The thing I brought him to sign? It was a copy of Story Magazine (Spring, 1996). This was a small literary mag, specializing in short stories. I subscribed to it for a while, when I was a grad student, and first came across his work here.

In this issue, there was a small excerpt from Fight Club, a chapter entitled Project Mayhem. This chapter was published prior to the novel, and a bit before the movie.

While everyone else had copies of Choke or Diary, I was pretty excited to walk up with this. I figured he wouldn’t have seen too many copies, and I was right. He was pretty taken with the fact that I had this, and said that “Lois Rosenthal would be touched.” 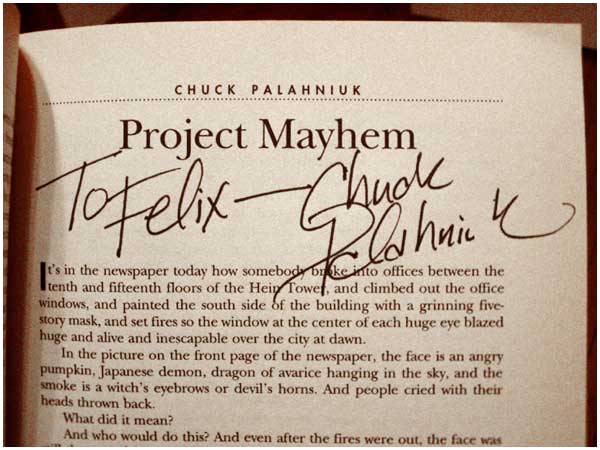 « I’ll Tell You Who
Difficulty At the Beginning »