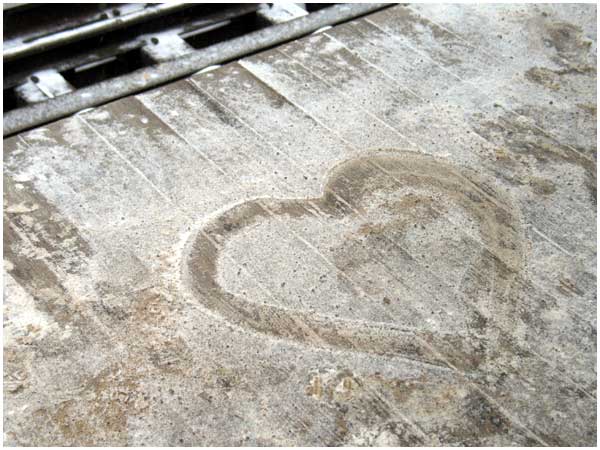 As I was taking a picture of the words, I looked over and saw that this girl had carved out a heart into the snow with her foot. I walked up to her, and asked if she was the one who had written the “Be Kind” message. Her reply was “No, but I wish I had.”

I asked to take a picture of her heart, and found out her name was Brianna. Before I could really ask her anything else, the train roared up and the two of us boarded silently.

During the ride into downtown, I thought about telling her about the blog, and introducing myself some more… but it all felt kind of wrong. I don’t know how to explain it, but it did. As though, if I said anything more I’d taint something.

I liked the notion of just happening across her making a heart in the snow. And secretly, some small part of me wondered how long both messages would last on the platform, before more snow (or more people) would cause them to disappear.

It’s a rare thing when the city reaches out and tries to pass along a message. This morning, I counted myself lucky to have been privy to such counsel.

I was reminded this morning, and I’d like to do the same to you.