The Arby’s “Six Roast Beef Sandwiches in One Hour” Challenge

As legend had it, one of her coworkers took up the challenge… but then called the bet off after sandwich #4 – due to the fact that the sandwiches came with Arby’s Sauce on them. This was back in like 1997 I think.

Well, today… Jane got an email from her coworkers saying that they were reviving the bet, and someone there was going to try to eat 10 in an hour. We started discussing that bet amongst ourselves, and while eating 10 Arby’s Roast Beef Sandwiches in an hour seemed much… we were hovering around the number 6.

And so it began.

Ben claimed that he could do 6. Chris had his doubts, and called foul. Over the course of the next 45 minutes, a variable number of contingencies were proffered and rescinded; slowly, the vague outline of a bet began to take form.

At first, the offer was that Chris would buy the six Arby’s Roast Beef Sandwiches and, should Ben eat them within an hour… Chris would pay Ben $10. If Ben failed to eat all six, he simply had to refund the cost of the sandwiches.

And just as we thought the bet was being solidified… things began to unravel. Chris began to worry about the amount of money he was staking, and it looked like the bet wasn’t going to happen. Justin and I decided to cover the $10 prize money, and the Lord and Master Stein™ made its way onto the playing field.

The rules, as agreed upon by both parties:

Six Arby’s Roast Beef Sandwiches are to be consumed within one hour. No throwing up is permitted during the initial hour, or for the hour immediately following.

If Ben is successful, he receives $10 prize money and gains control of the Lord and Master Stein™.

If Ben is unsuccessful, he refunds the money Chris spent on purchasing the Six Arby’s Roast Beef Sandwiches.

And now, without further adieu… let’s get it on! 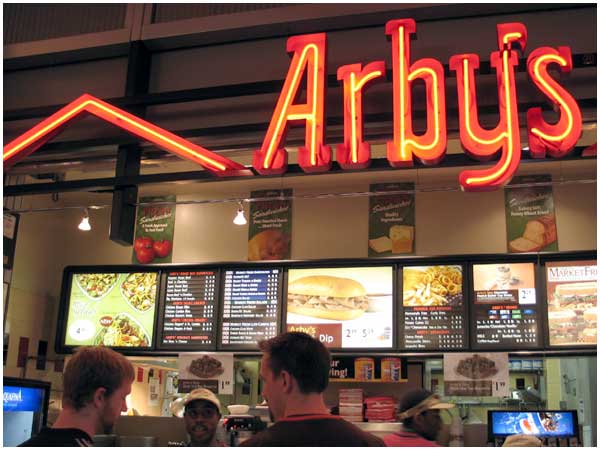 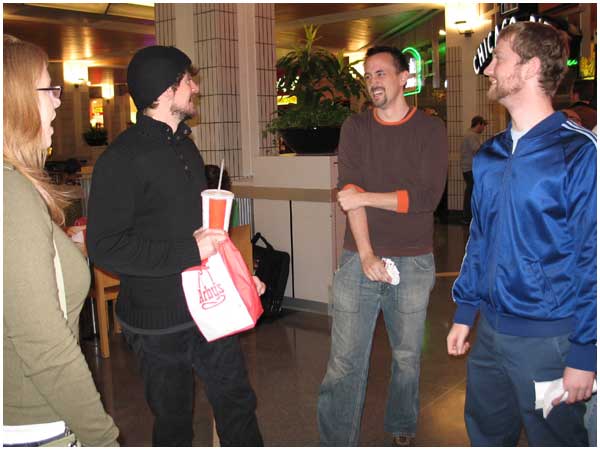 Waiting around for the sandwiches to be made. L to R it’s Jane, Justin, Ben, Chris. 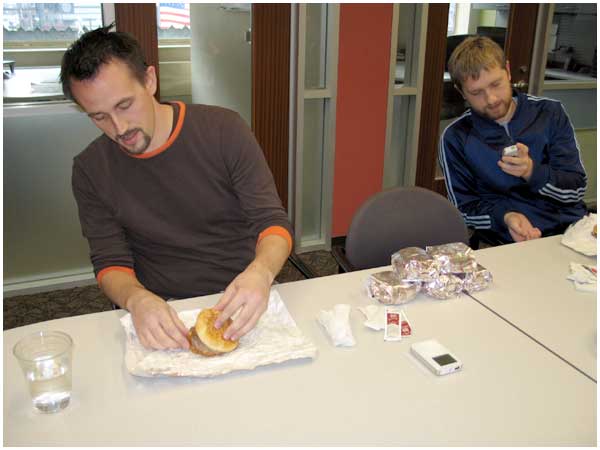 Ben preps his sandwiches while Chris readies the timer. I love how they’re both tilting at exactly the same angle. 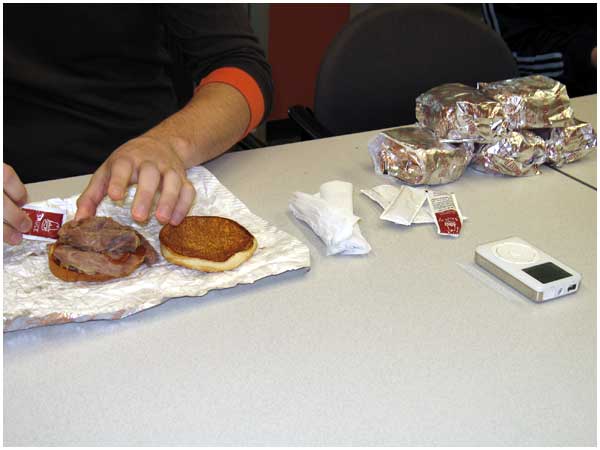 That’s a LOT of roast beef…

Ben, wondering what he’s gotten himself into. 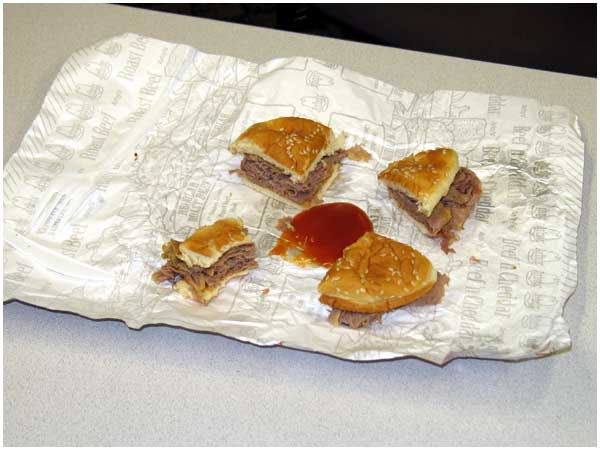 The final sandwich, chopped into fourths for easier consumption.

Does Ben make it? Can he finish off the sixth and last? Will he emerge as victor and champion of lunchtime? Or will he be forever remembered as That Guy Who Couldn’t Eat Six Arby’s Sandwiches In An Hour?

The only way to know for sure is to watch the video, below. For almost the entirety of the hour, I had my camera on my tripod and shot video the whole time.

I’ve taken that hour of video and compressed it down to a lean 5 minutes, start to finish. I realize this is going to be a huge file, but I promise you… I PROMISE you it’s so worth it. There’s an initial 45 seconds of setup in the video, and then it just goes. See for yourself. And don’t forget to turn up those speakers!