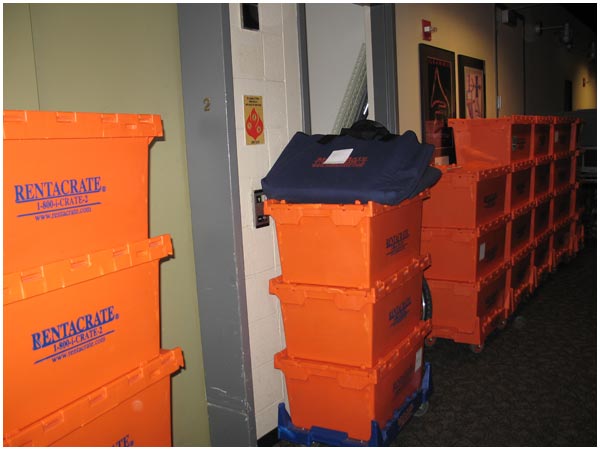 Well, today’s the official moving day. A bunch of us showed up bright and early to help get all our boxes loaded up for transport. Here we are, circa 8:30 AM, with a line of crates near the service elevator. 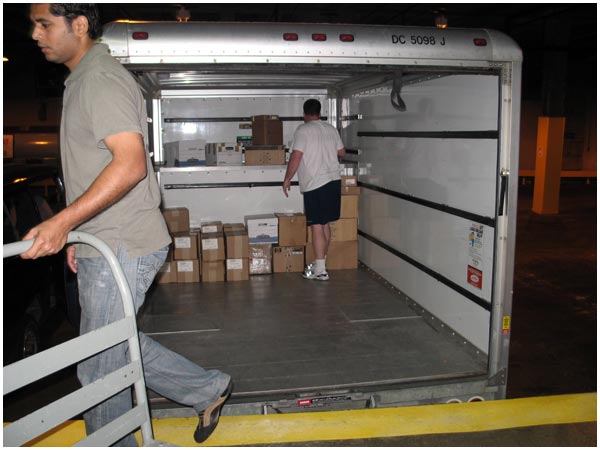 Mike and Kashif, setting the groundwork. 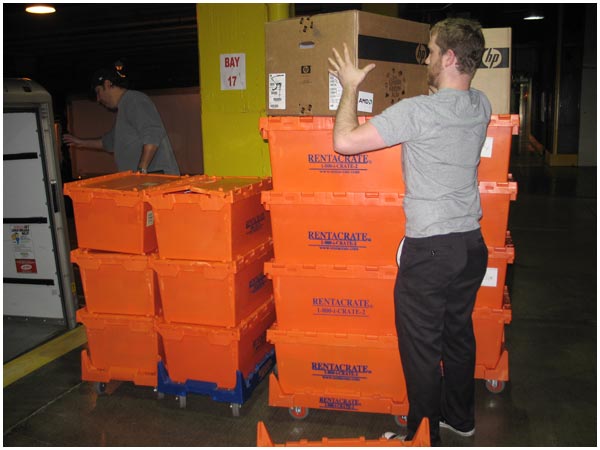 Chris, with the first wave of boxes. 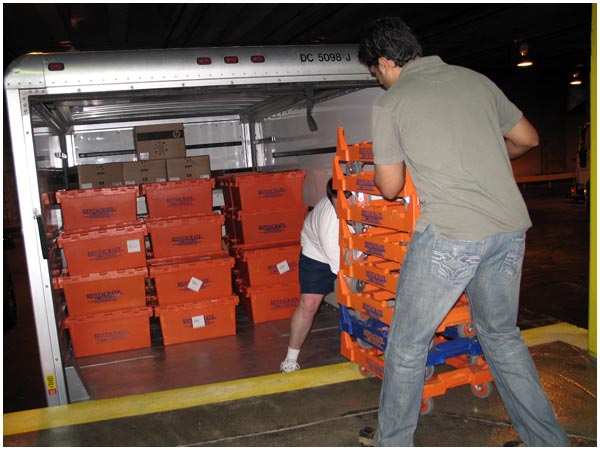 Kashif and Mike, loading more crates. I know what this looks like (me just hanging back and taking pictures, while everyone else works). I swear though, I did help move… a box or two. :P 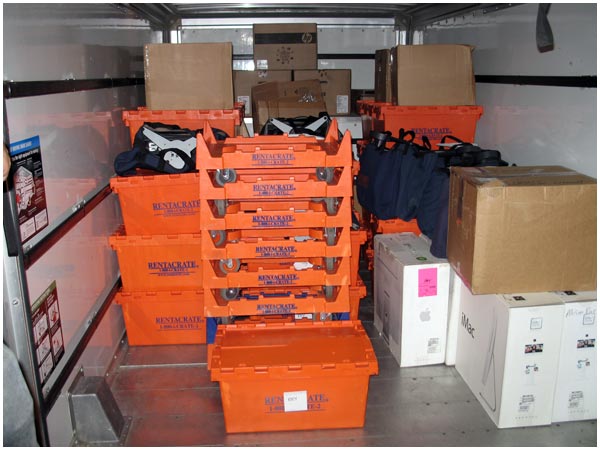 Right about here is when I thought we were done. 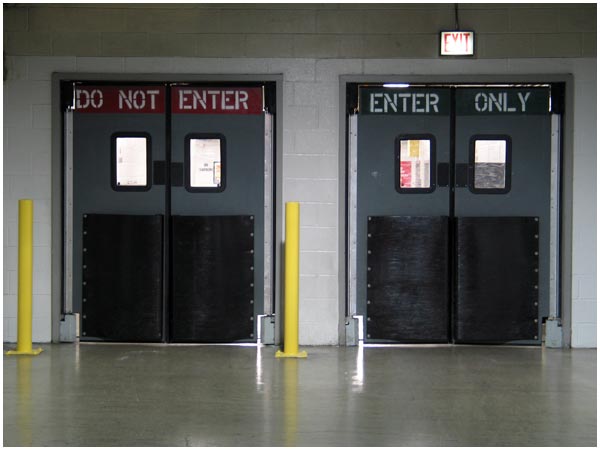 Nearby doors that caught my eye. 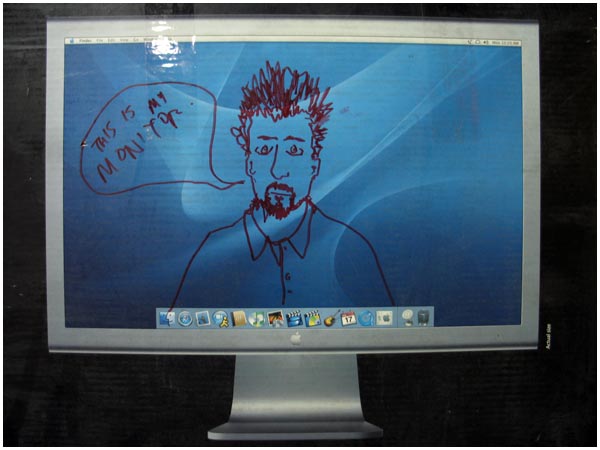 I think… this is Ben’s monitor. 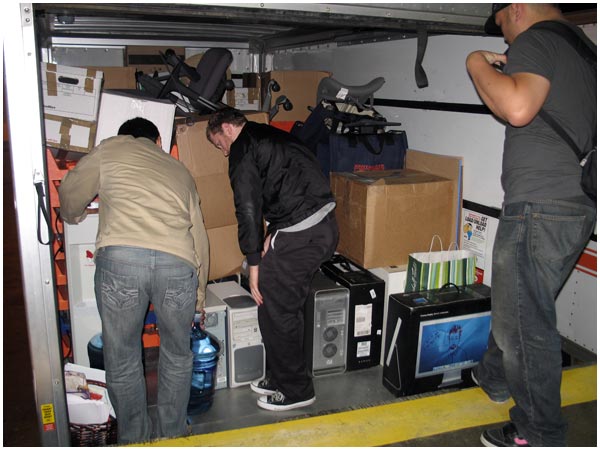 Stuffing more crap into the back of the truck. 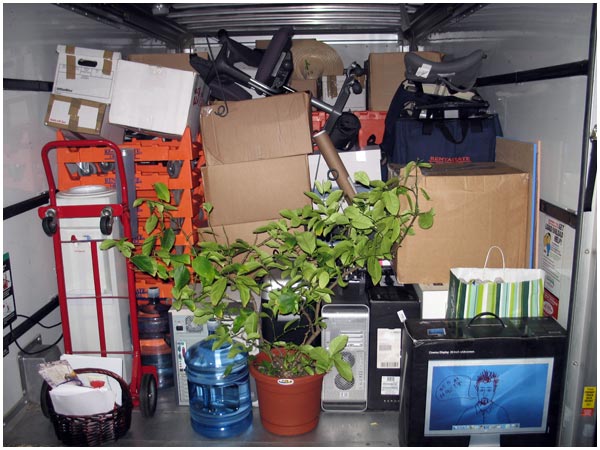 Finally – all packed up, lime tree and all. 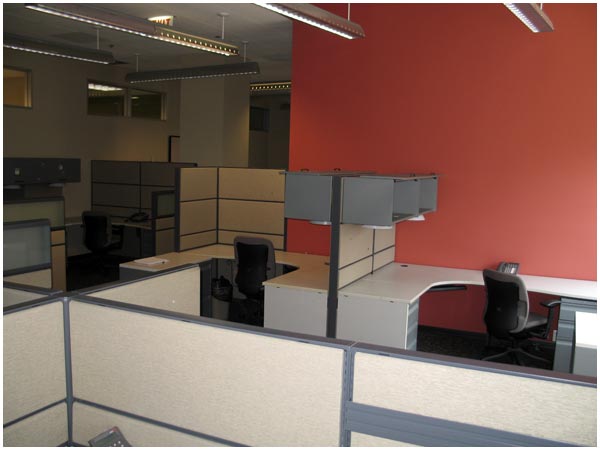 A final look at the old space. 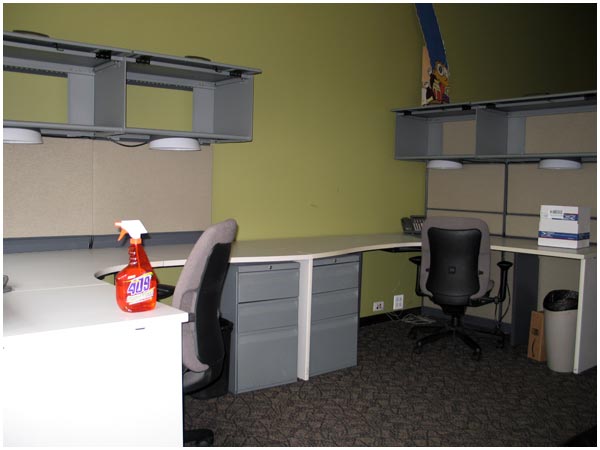 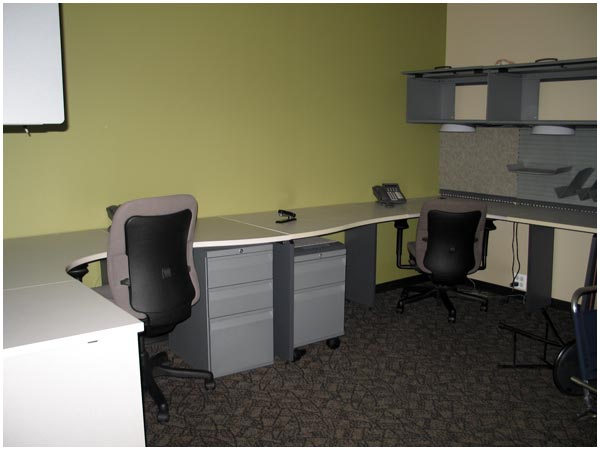 Below, you’ll see a string of videos I shot on first walking in to the new space. I intentionally avoided going to visit during the whole construction process, as I wanted to see it for the first time along with everyone else.

The lighting settings on my camera are off – the background is blown out at some points, and overly dark in others. While my videos don’t do the colors justice (Rey, Ben, Jane and Chris all contributed to the final color scheme), I hope some small part of it comes through.

The place… is massive. It’s beautiful, and it’s still hard to imagine this is our new home. On walking through the floor, I kept saying to myself “What are all these desks for? Why do we need all these desks?”

We’re hiring on folks at a stunning rate, and I definitely feel swept off my feet. Walking around our new office space, it’s staggering to think that at one point we had to relocate our computers to Justin’s house, because his cable connection was faster than the Internet connection we had at work. 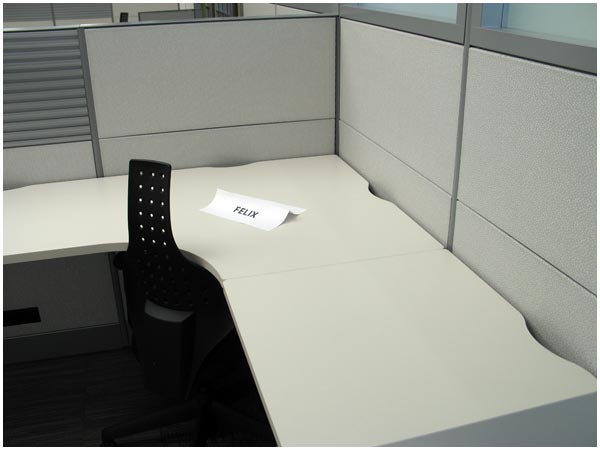 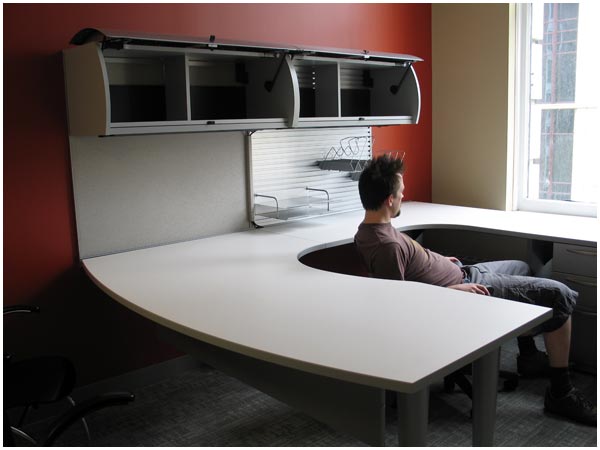 Ben, looking out his window and contemplating life in a new office of his very own. 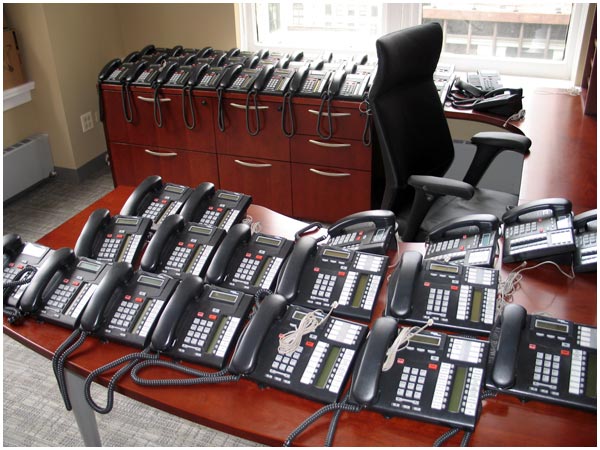 We’ve got a few phones at the new place. 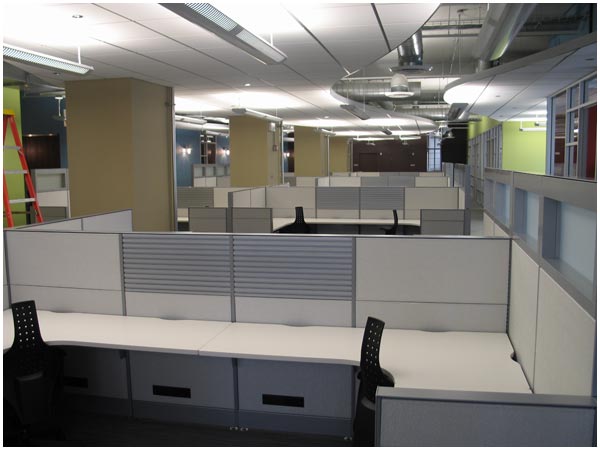 Long view of the office. This place is HUGE! 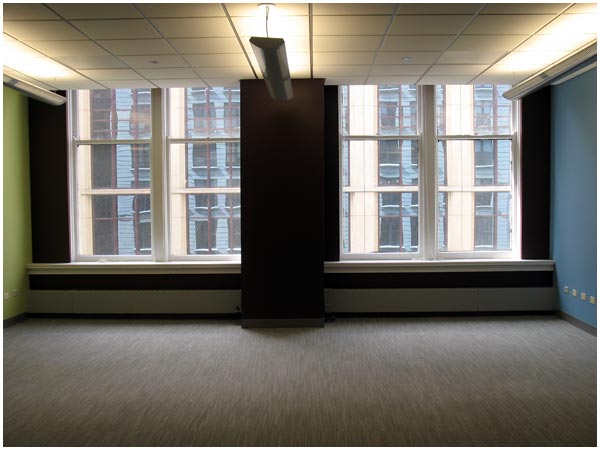 View of the middle area. I think desks may go here eventually, but there’s talk of a ping-pong table going here in the interim. 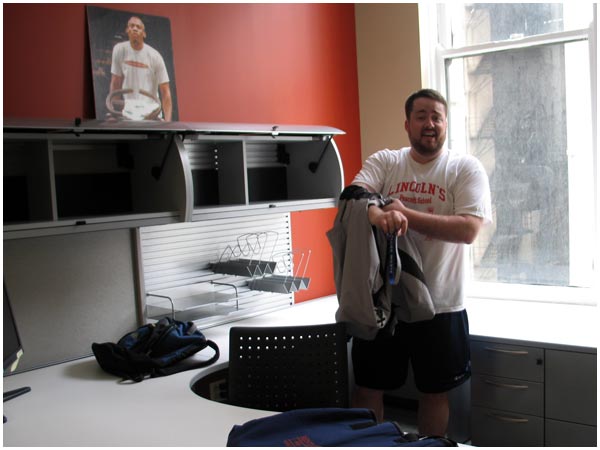 Mike, getting settled in his new office. 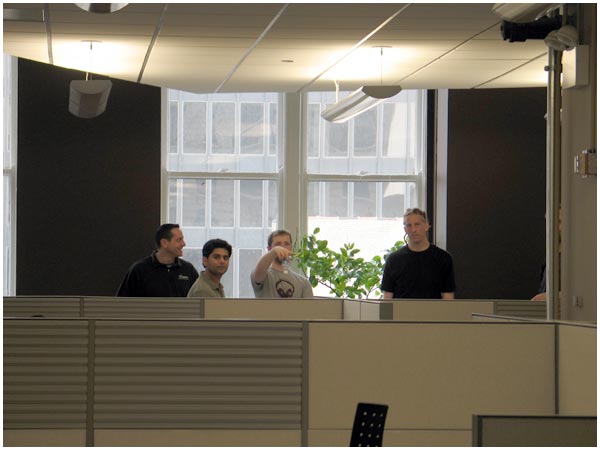 This was taken from my desk. And yes, I had to use a zoom to get this shot of the dev area (all the way across the floor, on the other side). 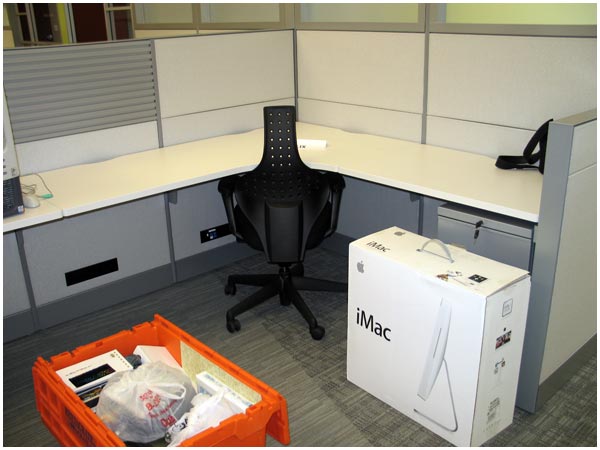 My work area – and me about to settle in. 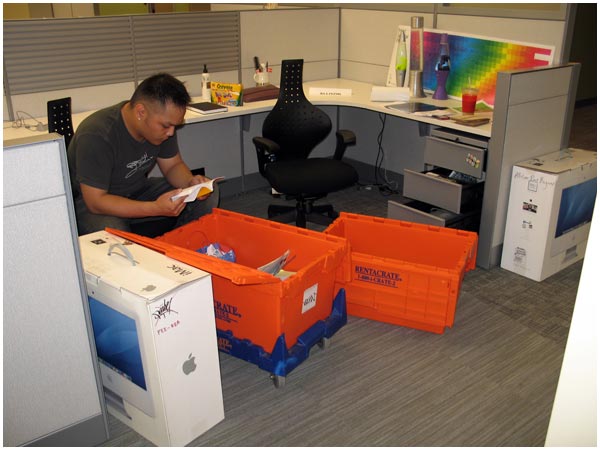 Bryan, looking over some things (Allison’s area is nearby). 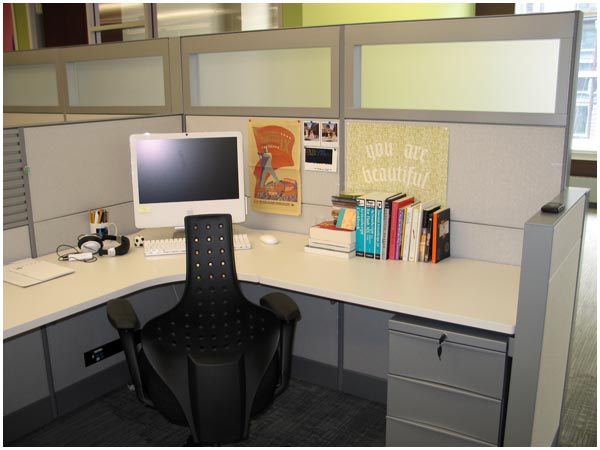 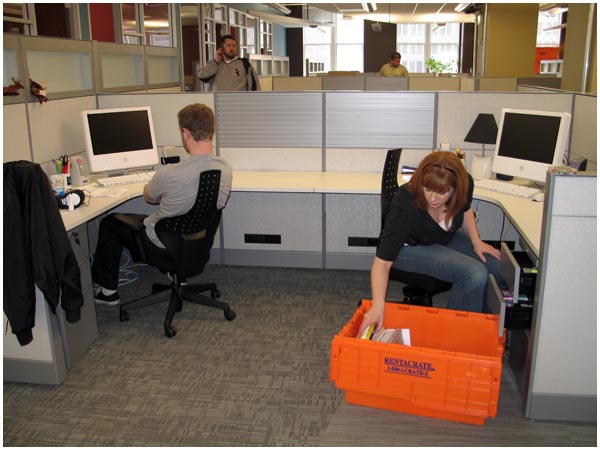 Chris and Jane, across the way.

Looking over the blueprints, I thought the aisle between the cubes were a lot smaller. Turns out, there’s a good gap between me and everyone else. It felt a little isolated at times, but it’s not so far that I can’t have a conversation.

This place is so massive – there’s so much space and so much room, I can’t believe it. 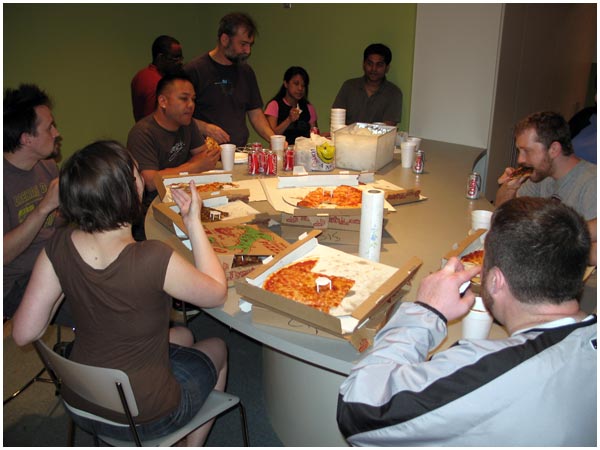 And to celebrate – we got a ton of pizzas for lunch. After a full morning of lifting and moving and setting up, we all pretty much converged on these things and did some serious damage.

And last but not least, Bryan tested out our new carpet by strapping on the Fun Slides.

« Saying Goodbye to the Merchandise Mart
Here There Be Dragons »