This weekend, we woke up early to go hang out in Frankfort. I had planned a day with Bob, looking to learn a bit more about woodoworking and overall home repair. Liz and her mom were off to visit with Tricia and family.

That said, I know squat about working with wood, with tools, and general home maintenance. As Bob has had a lot of experience on tons of work sites, I’m hoping to learn a lot of what he does… if for nothing else than to know it. I can write a decent line of Actionscript, and I can tween an object in Flash until the cows come home… but these skills seem fairly specialized, and a little less practical some days.

Wood. Nails. Saws. These seem like good basics to know. 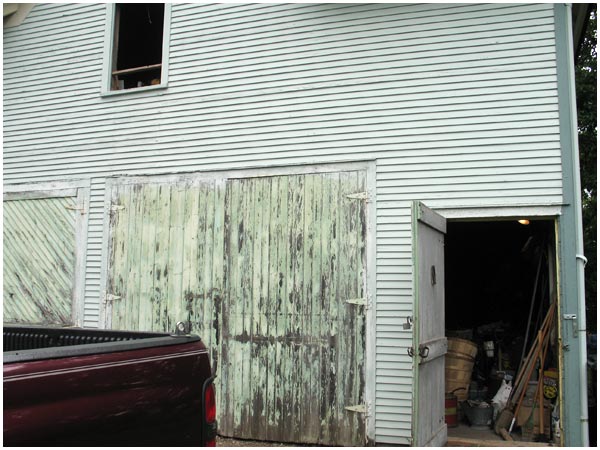 Outside the barn, where Bob’s tools/shop resides. 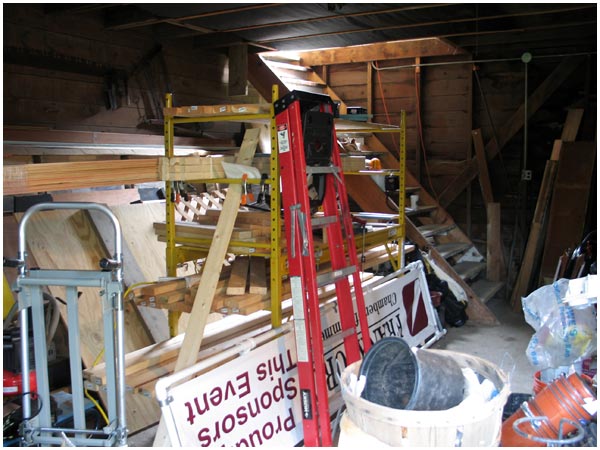 Inside, there’s lots of stuff in storage for the house. Stairs in back lead up to the second floor, which contain all the tools. Sharp eyes might notice the Frankfort Chamber of Commerce sign, which appeared in my last post about the Frankfort Brass Band. 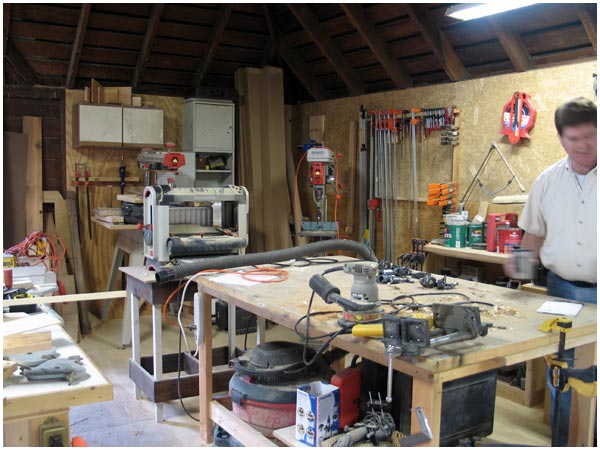 Bob and his work area. 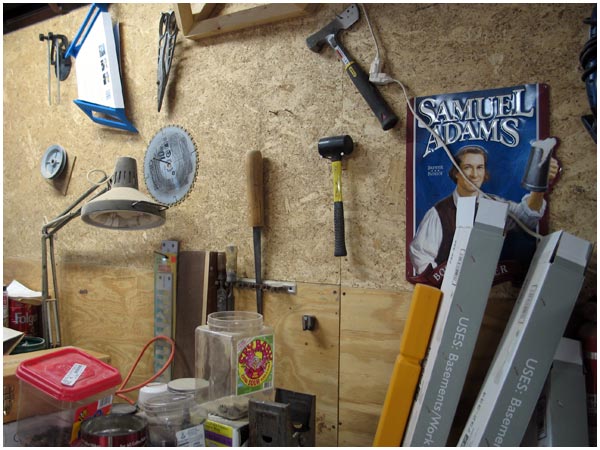 Samuel Adams is a fine tool as well. 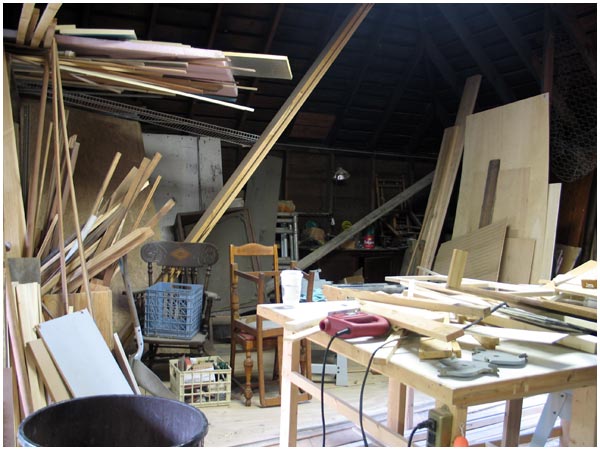 Lots of spare wood for (and from) other projects. 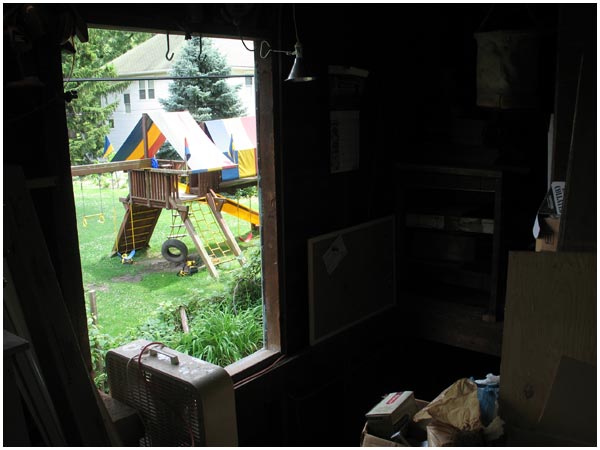 By the stairwell, a large window opens up and looks out to the neighbor’s play area. 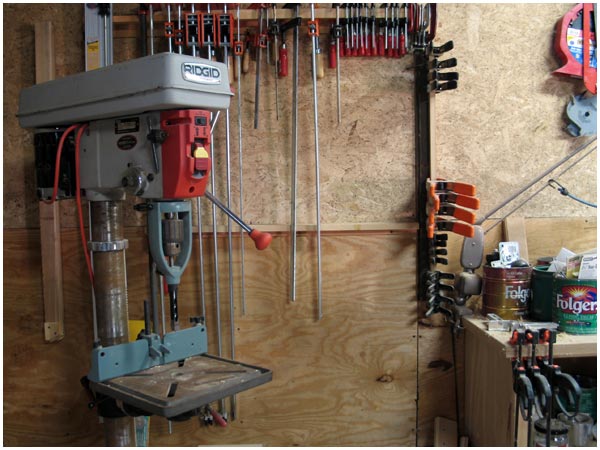 Drill, and a few rows of clamps. According to Bob, “you can never have too many clamps.” 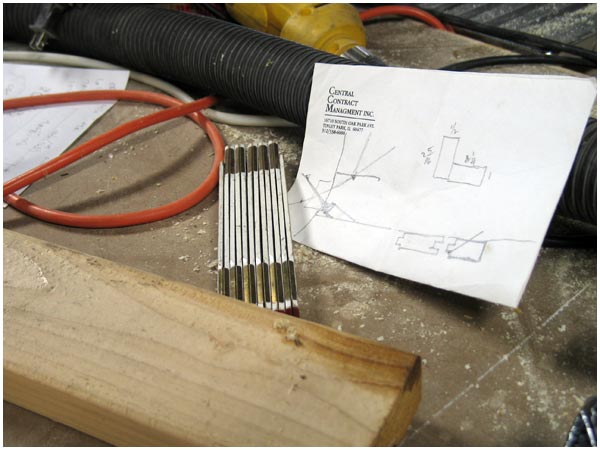 Overall, Bob and I spent a good deal of time hanging out and talking. We ran some errands during the morning, and I asked a lot of questions while we were in the shop. I learned about mortise and tenon joints, tongue and groove, and a whole host of other terms. While we were driving around, I heard a few great stories… the best of which involves a friend of his who took a day off of work, and during that day raised up his house, transported it a half a mile down the road, and set it back up again…. all in one day.

We spent a good portion of the afternoon clearing out a lot of old lumber from the work area, and cutting them up into disposable-sized pieces. In a short amount of time, I was quickly covered with sawdust. Though I didn’t get a chance to really work on anything, cleaning up and sweeping felt like a good start.

I’m pretty green with all this stuff, but I’m eager to learn. And I’m pretty excited at the idea of actually making things (one day) with my own two hands. I do so now, but the things I make are all 1s and 0s, pixels of light on a screen.

There’s a satisfaction with physical objects that seems, at least right now, appealing to me. Not having really done anything like this, it’s tough to say. But I’m curious to see how things progress.

It’s a bit of a trade-off. Sleep in and laze about on a Saturday… or wake up early, drive down to Frankfort, and get dirty with work. Right now though, that work sounds appealing to me. There’s a lot I can learn, and it seems too good an opportunity to pass up. Looking forward to seeing what the coming weeks bring. 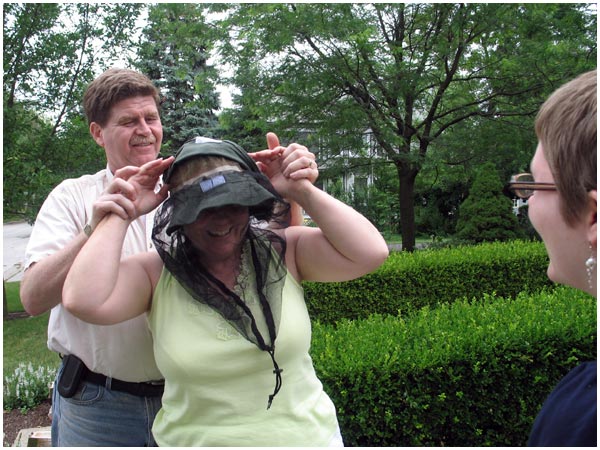 Prior to us leaving, Julie discovered that her “mosquito hat” had arrived in the mail. There’s a lot of mosquitos out back, and this hat will help her garden without being pestered (pardon the pun). This was a pretty silly moment, and seems to capture the mood pretty well.