Went out exploring Lincoln Park some more today with Liz, looking to see if we can find a spot for the wedding ceremony/reception. We’ve looked at the Lincoln Park Zoo before, but today we focused on the public/park areas, just outside the zoo. 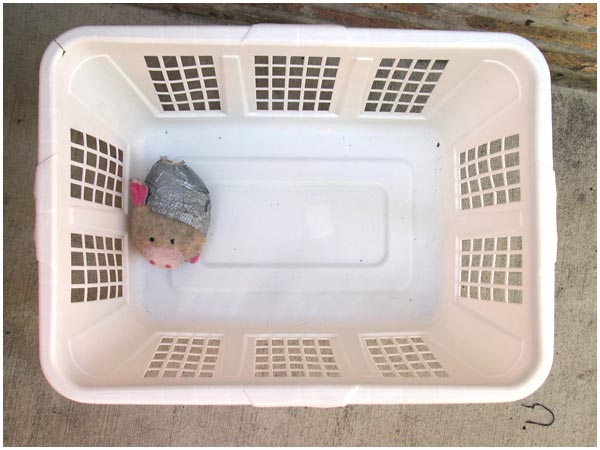 On heading out, I spotted this out back by the dumpster. 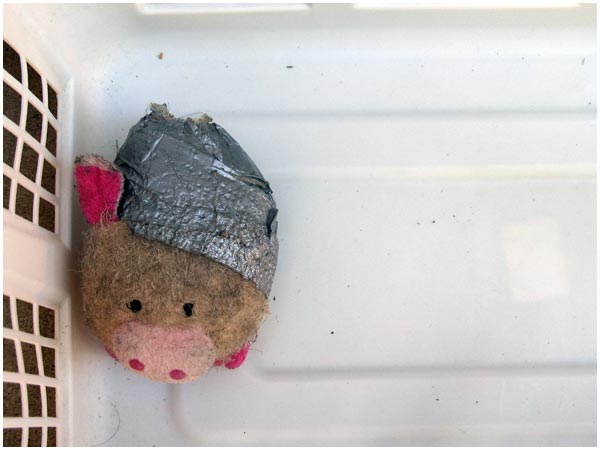 I love the fact that he has duct tape on him, as it suggests the owner tried to keep him around as long as possible. Poor little guy. 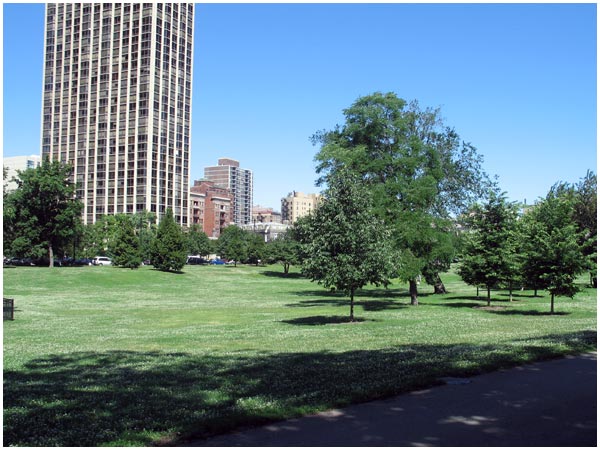 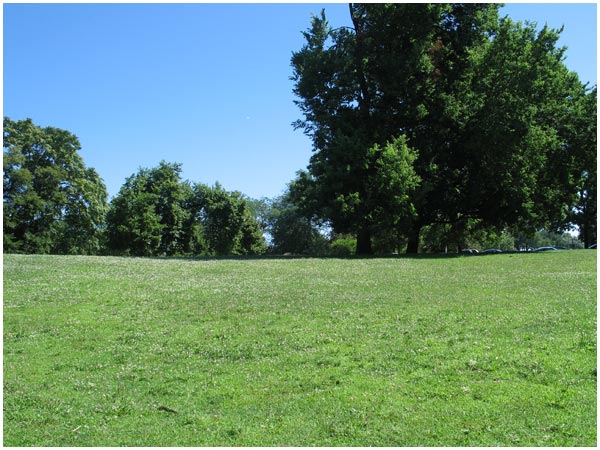 More open areas. I took a lot of photos like this, just looking for open spaces where we can gather a big group. 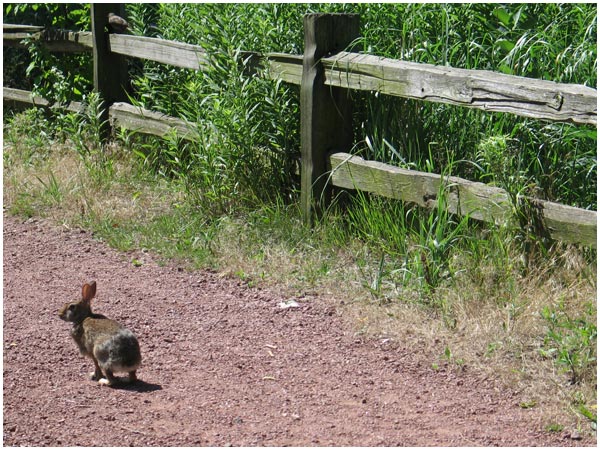 Wandering around, we spied a bunny that let us get surprisingly close, before hopping away. 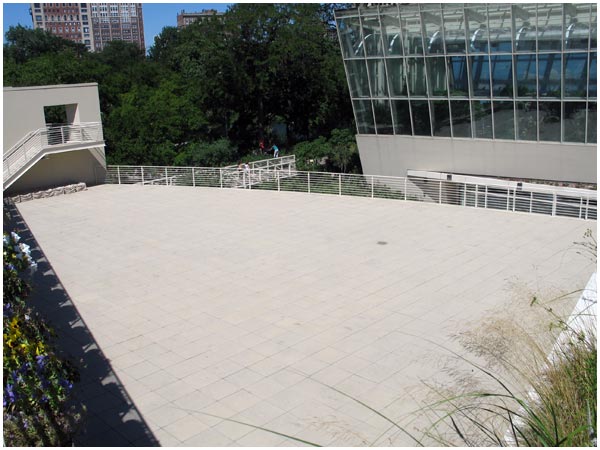 We got to take a look around the the Peggy Notebaert Nature Museum, as there were several spots that seemed promising. This is outside the third floor, looking down to th 2nd floor balcony area. 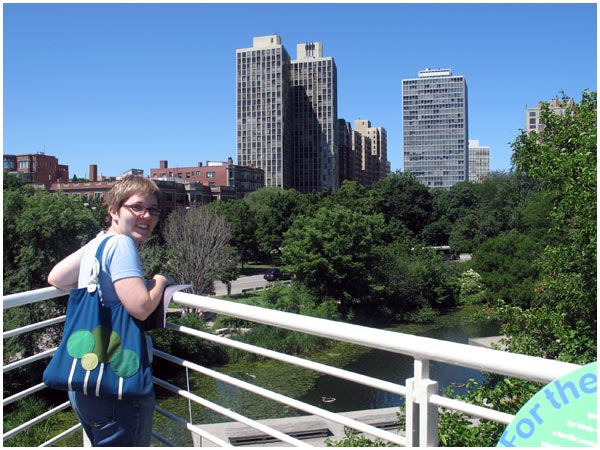 Liz, perched out on the 3rd floor walkway. 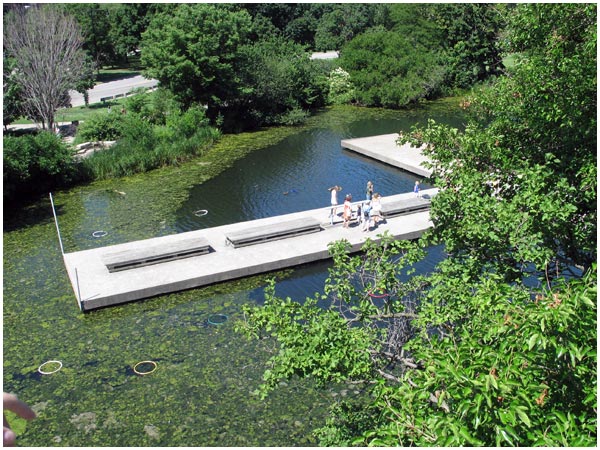 Looking down onto the nearby pier/dock. 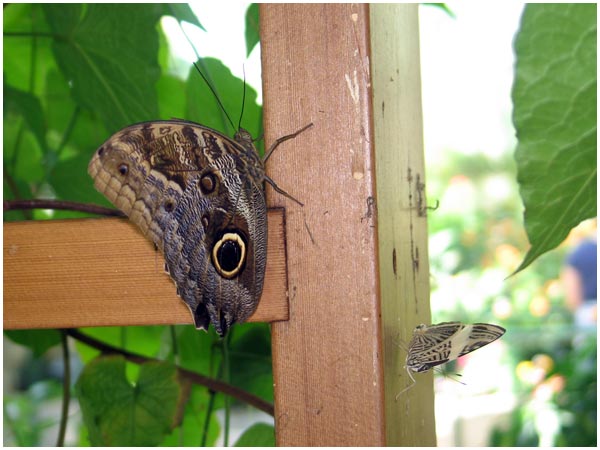 Inside on the main floor, we got totally distracted. As we were looking at the spaces, we saw that there was a butterfly room exhibit. I felt a little weird about going in, as we didn’t officially pay for admission and were just “touring” the facilities. But man, am I glad we did. 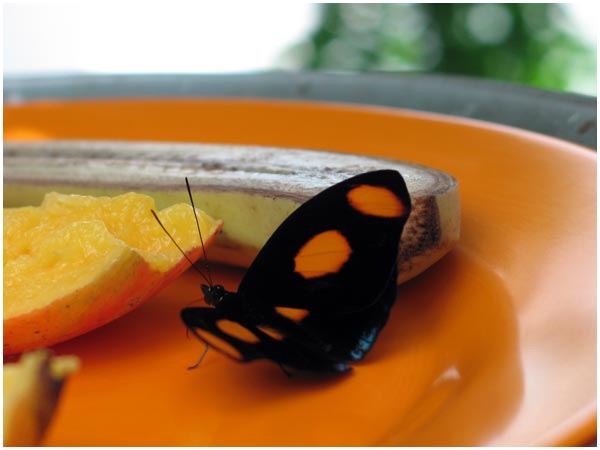 Butterfly, feeding on some fruit. 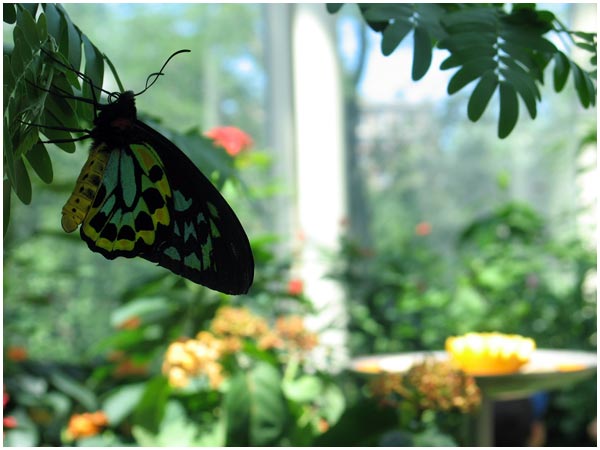 They were literally everywhere. The video I took of the room didn’t do this place justice, as it didn’t pick up all the wings and fluttering about. 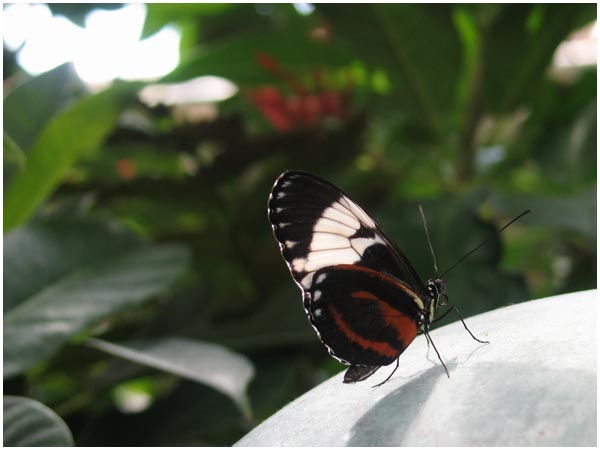 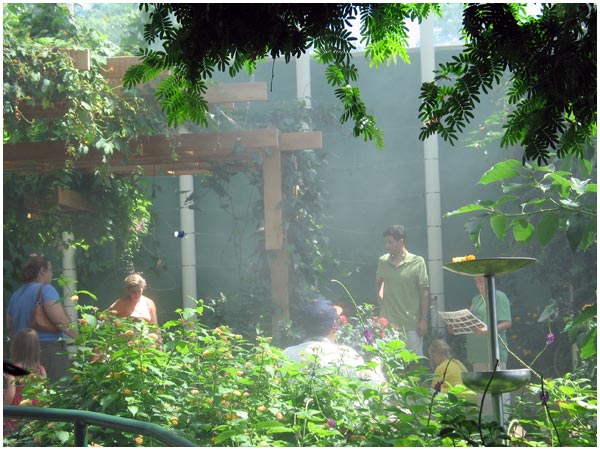 At random points, a light mist kicked in covering the room with water. The room itself was incredibly humid/warm, and I guess this is partly how they kept it that way. 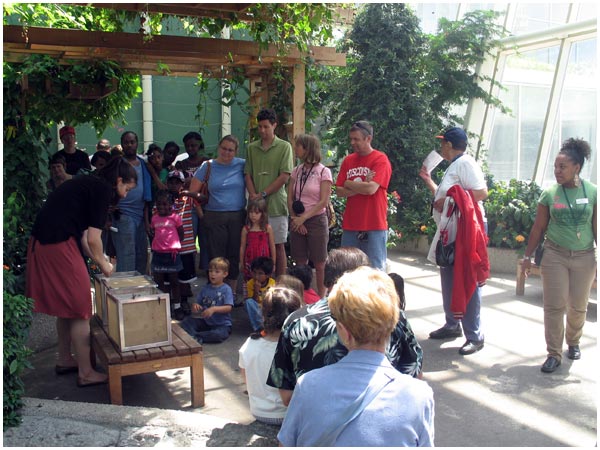 As luck would have it, a woman walked in with two boxes of butterflies. She was going to release them, and a small crowd of children gathered around to watch. 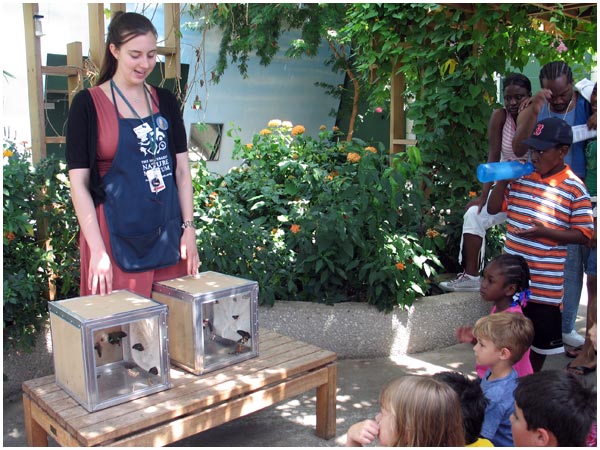 Prior to the release, she did an overview of butterflies, answered some questions and got the kids talking/excited. One interesting fact I learned: the protective casing for butterflies is called a chrysalis, and not a cocoon.

Outside the butterfly room, there were a ton of other butterflies waiting to emerge. 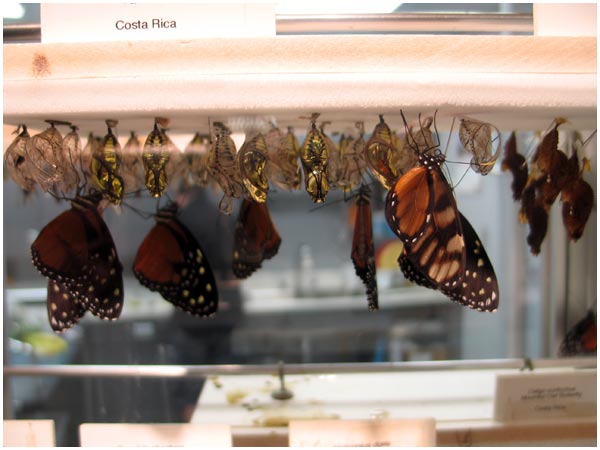 Accorrding to the woman who brought in the butterflies, there were a ton of butterflies in here. Something around a thousand butterflies a week arrive here.

Shortly afterwards, I get friendly with a boa constrictor at a nearby booth staffed by volunteers from the Chicago Herpetological Society. 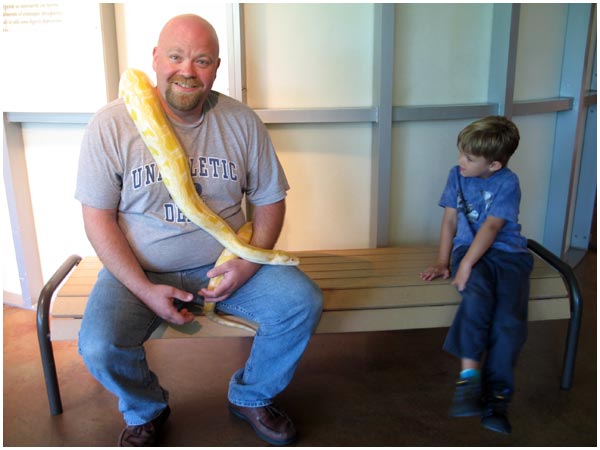 And then… I meet a much larger boa. 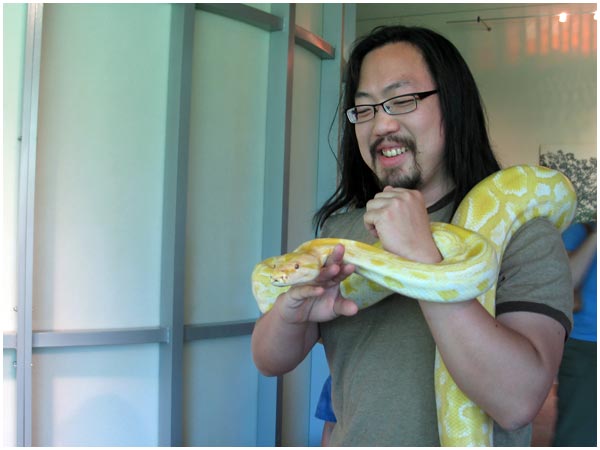 Her name… is “Fluffy.” She’s also a boa, but I found out all snakes are technically constrictors. She’s about eight feet now, and will get to something like 18 feet when she’s fully grown. As her handler described her to me, he said “she’s just a baby.”

Fluffy was incredibly gentle. And though I was nervous at first, it was pretty clear she was just laid back and doing her thing. It was a little nerve-wracking, but cool.

Particularly funny was watching kids come by the area, and then see them suddenly spot Fluffy. A few yelled out things like “Wow!” and “Coool!” but a few also just screamed, and turned around and left. 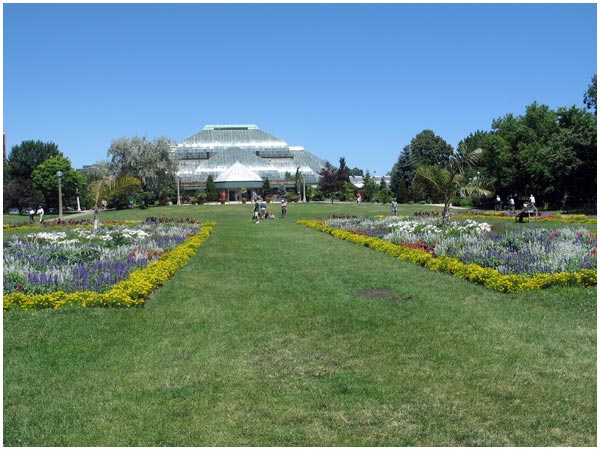 Ok – back on track again with the wedding stuff. This time, we walked around the zoo itself a bit more. This is from the main area near the Lincoln Park Conservatory. 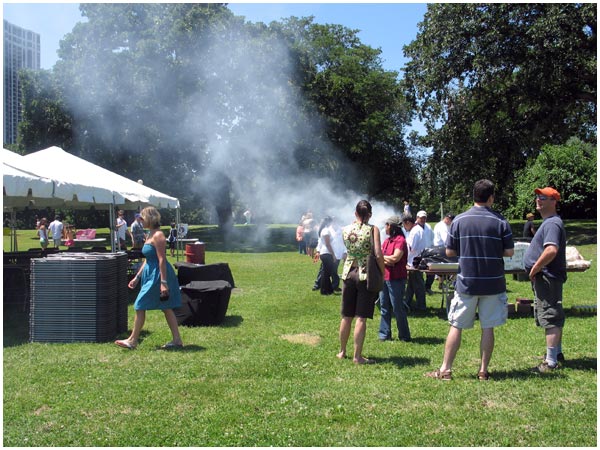 Walking around some more, we stumbled across a private event complete with tents and food. Prior to this, we had heard that you couldn’t set up tents and whatnot on park grounds, so we tracked down the organizer of the event and got some details.

It was great to see an actual event in action, as we had previously thought some of the things we wanted (tents in particular) weren’t allowed. A lot of options we had dismissed were now back on the table, in terms of having maybe an afternoon wedding/reception. 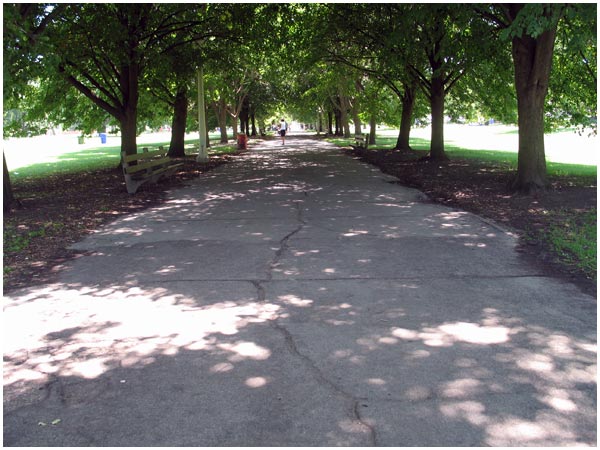 A cozy, shaded walkway where we stopped and sat on a bench for a while.