Chris Returns from a Week’s Vacation: “The Tent” Prank

So Chris has this sweater.

A long while back, when we had our office next to Q101 in the Merchandise Mart. One day, Chris was pretty cold in the office… and at the time, Andy was working over in Marketing/Promotions.

Andy used to give us lots of neat things, and helped find something from the prize closet for Chris to wear. Unfortunately, the only thing he had was this XXXL sweatshirt that was branded with “I’m a Celebrity, Get Me Out of Here.”

Chris, not wanting to look a gift sweater in the mouth, took the article and adopted it as his own. He wore it in a halfway-on sort of way, with both arms in the sleeves, but with the rest of the sweater resting against his chest.

This sweater became known as “The Tent,” and would get taken out whenever it got too cold in the office. A few other folks besides Chris have also used it from time to time, should the chill in the AC prove too much.

Last week, Chris was away for a little over a week, getting married and on his honeymoon. You can sort of see where this is going.

Allison, with her affection (and skill) at pulling pranks, had a little idea. And soon enlisted the help of others at the office.

Today was Chris’ first day back, and Ben took him out to get a cup of coffee. While away, Allison was setting up his machine with the video clip…

The clip set, the note placed, and all that’s left is the waiting…

For those interested, here’s a larger, 20MB QuickTime version of the video. 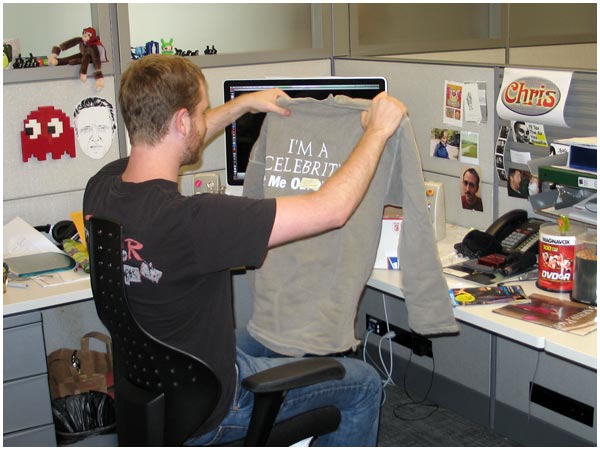 At the end of it all, it was a decoy sweater that Allison had purchased, and that had taken all the abuse throughout. The sweater itself was packed into an impossibly small box, which was then given as a gift to Chris. On opening it, he found “The Tent,” freshly laundered and smelling like it had never been worn before.

On seeing the final version (that’s Liz and I near the end there, with the scooters), I’m awed at how much work Allison put in to make this video. Lots of planning, lots of coordination, lots of inside jokes…

Lots of love in this office. :)

« Lazy Sunday with Fables: The Good Prince
Um… Wait… What? »