Thick Fog, and the Long Drive to Indianapolis

En route to visiting my family in Indianapolis, Liz and I had to make a brief stop over at Midway. My sister had recently taken a trip, and left her wallet on the plane. By the time an incredibly kind person noticed and reported the wallet, the plane was already in Chicago.

The airline (Northwest) wouldn’t mail the wallet, due to liability issues… so the next best thing was for me go pick it up.

While I was inside the terminal, I saw an incredibly long line at the Northwest counter – about 30-40 people, and only one guy at the counter. After waiting for about 5 minutes and realizing I’d be standing in line for an hour minimum… I walked right up to the front of the line.

I apologized to the first few folks, and basically told them I was there to pick up a wallet, and would be out of their way in 2 minutes. A guy looked at me, pointed to the counter with his palm and said “We’ll be here all night.”

Originally, I took his comment as some kind of snark about how slow things were (with there only being one attendant). I waited another (uncomfortable) 5 minutes near the front of the line, waiting while the person at the counter finished up. When I asked about the wallet, he told me that I needed to go downstairs to talk to someone in Baggage Claims, that he couldn’t leave the desk to go look for the wallet since he was the only one there.

Downstairs, there was a throng of people – bodies and luggage everywhere. Miracle of miracles, a woman caught my eye and yelled across several people “Are you here to pick up something?” The guy at the counter had radioed down, and told the woman to be on the lookout for me, apparently.

Upstairs, after a quick ID check (they photocopied my Drivers License), I got my sister’s wallet, complete with all the money that was in there. As I was waiting for the woman to get my wallet, I saw a few folks camped out in the hallway nearby, and overheard one woman on the phone say “I’m stuck here, and I can’t get a flight out until the 30th.”

On my way out to the car, I had to push through a sea of people who had come up the escalator – easily 50-100 folks shuffling along in a huge line.

Apparently, due to the extreme fog, many flights had been out and out cancelled. Liz told me that while she was in the car, she heard over the intercom that all of Southwest’s flights had been cancelled. Suddenly, the one guy at the counter made sense – people all over Midway were scrambling to find alternate flights, and inside was pretty much mass chaos.

Looking back, the folks at Northwest were incredibly nice to me. The guy behind the counter was cool and calm, despite the fact that he was faced with a ton of upset/frustrated/stranded passengers. The woman who got my sister’s wallet for me was incredibly cheerful, and said Merry Christmas and winked at me, as she walked away.

On seeing Midway for that brief period of time, I was incredibly happy I wasn’t flying tonight. I was really tempted to yell out “I’M DRIVING TO INDIANAPOLIS, DOES ANYONE NEED A RIDE?” Seriously, I felt awful for everyone there as no one was going anywhere for a good, long while. 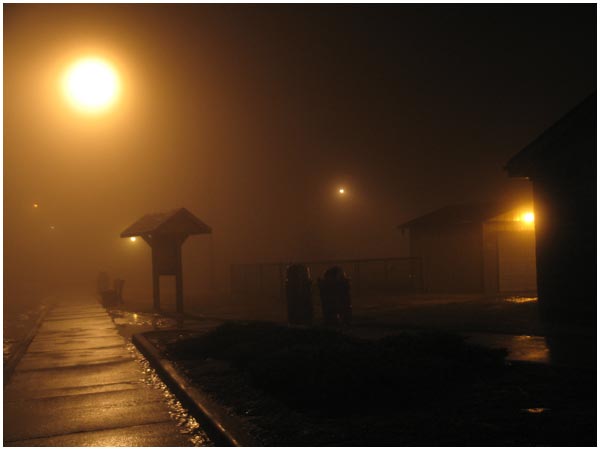 I have to say though, the drive to Indianapolis was no picnic. I took a few photos at a rest stop along I-65, somewhere in Northern Indiana. The fog for most of the drive was absolutely ridiculous. I cannot emphasize or exaggerate how bad the visibility was. 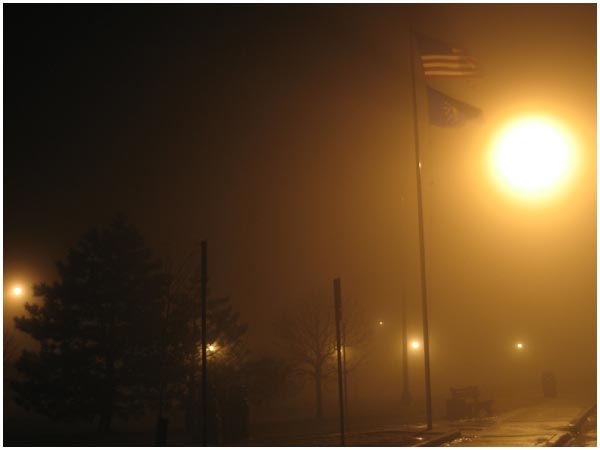 For good stretches, I couldn’t see more than 15 or 20 feet in front of my car. One of the more unnerving moments was when I saw the tail-lights of the cars in front of me slowly disappear into the distance. Driving in that kind of deep fog made me super conscious and hyper-attentive. I was constantly watching the road, trying to stay on the road, waiting for something to suddenly appear in front or behind me.

An hour plus of this kind of driving, and I was totally exhausted. 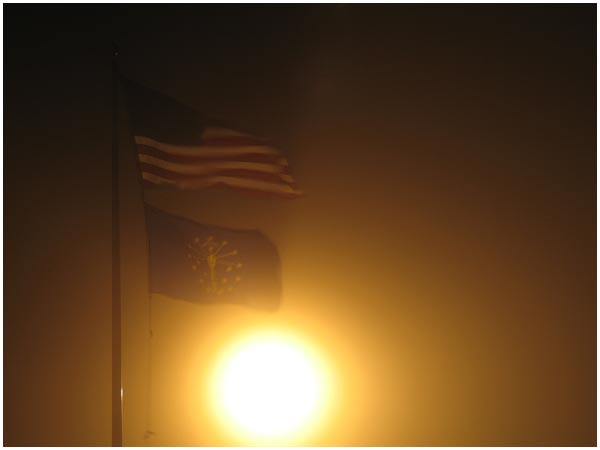 Closeup of the US and Indiana flags. 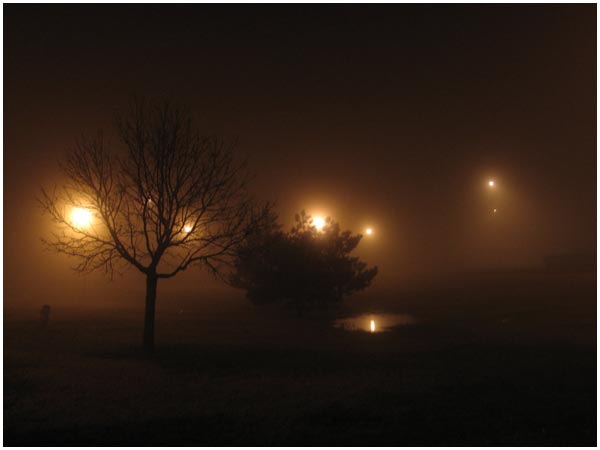 One of my favorite shots of the rest stop.

The fog finally lifted about 50 miles outside of Indianapolis. The whole ride, I kept thinking that things would clear up the moment we got away from Chicago… but in reality, things got worse. By the time we arrived at my sister’s house, I was very happy to be home, and to be motionless.