For most of the day, I was a nervous wreck. I woke up early to do a few practice runs of my Pecha Kucha talk, and then promptly spent the next 8 hours trying not to think about it.

I tried to concentrate on work as best I could, but around 2 or 3PM, I definitely was nervous and the feeling didn’t subside until after I got done with my talk.

I’ve done public speaking before, and actually really like getting up in front of a crowd (particularly for readings). But compared with my prior experiences at poetry readings, this event was quite different.

With my poems, the work is all done. I’m just on stage with some paper, and reading aloud. Maybe a little light banter here and there, some background on this particular poem or image. That kind of thing.

But for Pecha Kucha, it felt to me more like a performance. Given the format of the talk (20 slides, 20 seconds each), timing and delivery was a pretty big factor. I’d been on stage a fair amount before, but not performed on stage in a while. 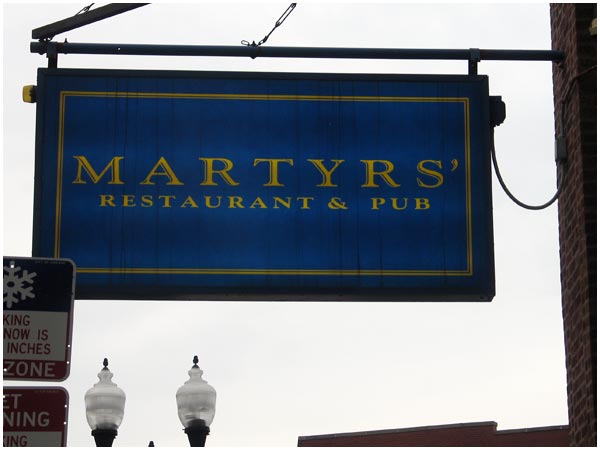 Outside Martyrs’. We got there early (or so I thought), around 7PM. The show was slated to begin at 8PM. 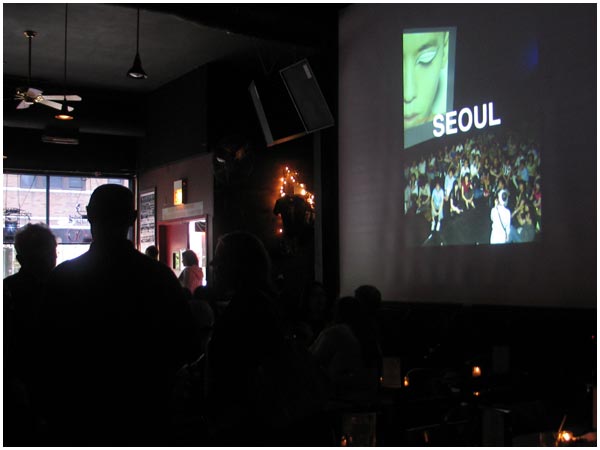 Inside, the place was already pretty packed. I expected the place to be empty except for the other presenters, but all the main table seats near the stage had already been spoken for. 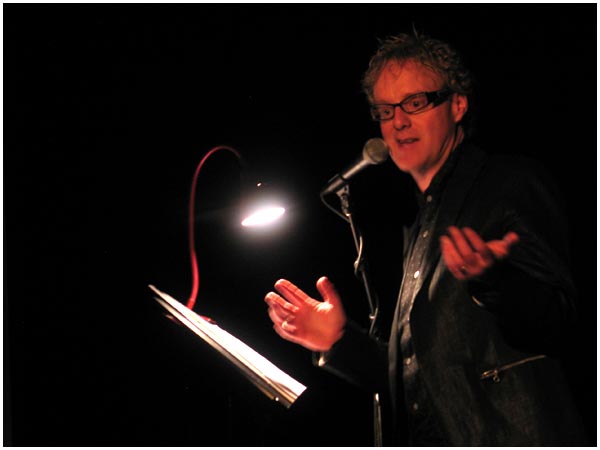 One of the event’s organizers, Peter Exley, warming up the crowd before the start. 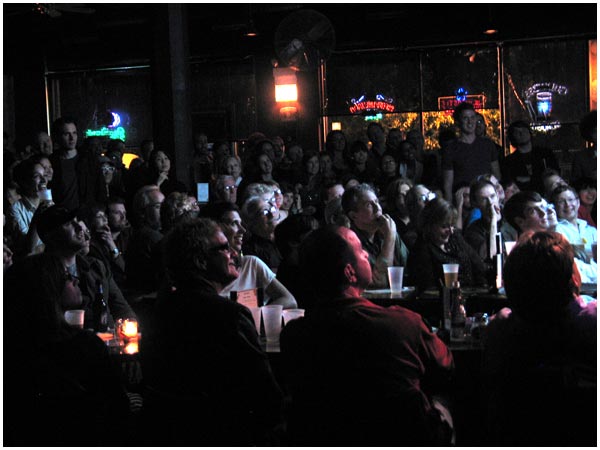 Here’s a view of the crowd, looking up at some slides. This is taken near the stage, somewhat by where the speaker stands. Technically, I took this after my talk (I was too nervous to do much, beforehand). 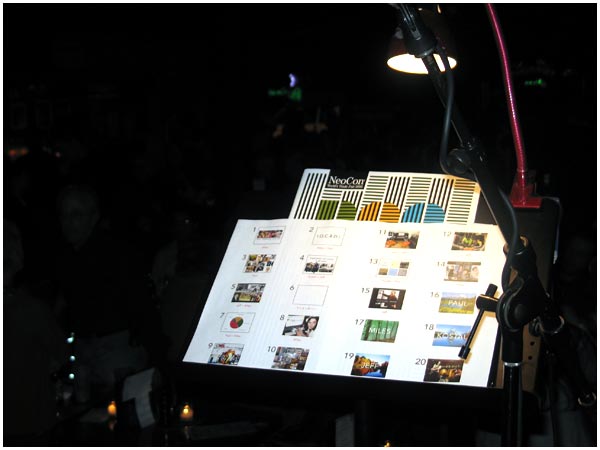 Here’s a shot of the stand, along with some notes. These look like the slides for the group presentation, done by All Things Lucid. 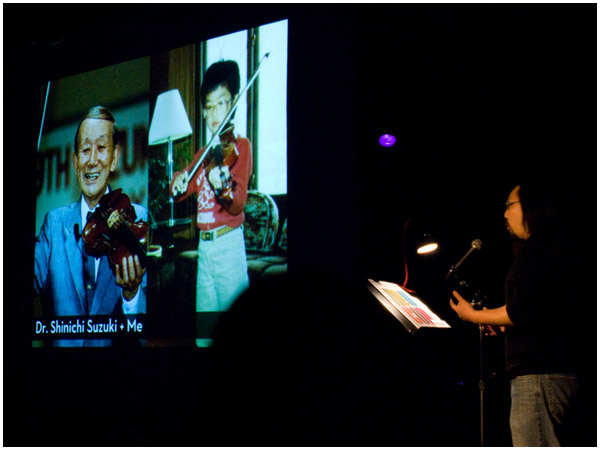 Here’s a nice shot of me, just getting started and at slide #2. Photo courtesy of Nick. 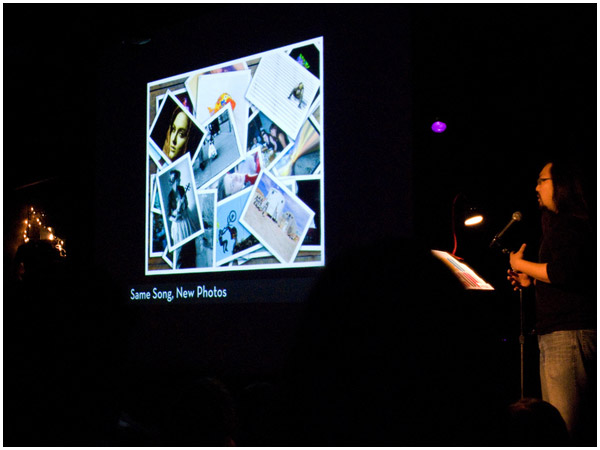 A later shot, about midway through my presentation. Photo courtesy of Nick. 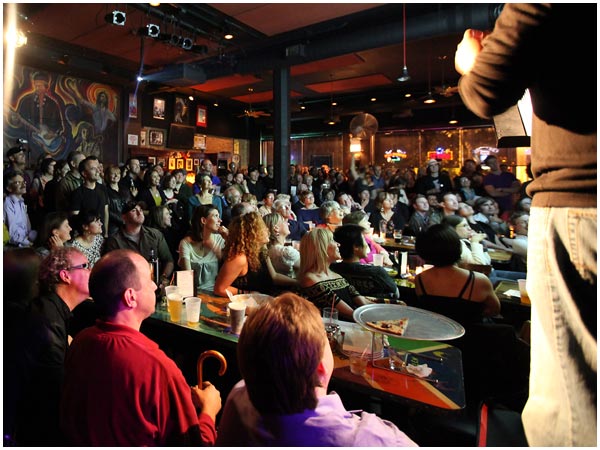 This was taken by the event’s other organizer, Thorsten Bösch, right near where I am, looking out at the crowd.

One of the great things I loved (in hindsight) was the looks on people’s faces. During my talk, I was too nervous and too focused on my delivery to really examine the crowd. But every so often, I’d see someone break out into a huge smile, and that felt incredibly good.

Interesting tidbit: because I was trying to keep at a certain pace, there were certain spots I knew I had to push through the crowd’s laughter. Possibly a slide or a silly remark. And the natural thing to do would be to pause, let the laughter subside, and then move on. But because of how I had my talk structured, I had to force myself to push through the laughter and immediately continue on to the next topic or slide.

Below is (mostly) my talk. Liz was using my camera to record, but it’s got a 3 minute limit on the video. So there’s maybe a minute or so of it missing. But for the most part, this is the talk.

To see some of the projects I’ve mentioned in this talk, feel free to swing by the Experiments page. In particular, I mentioned these Flash projects: Astronaut, Round and You Are I Am. 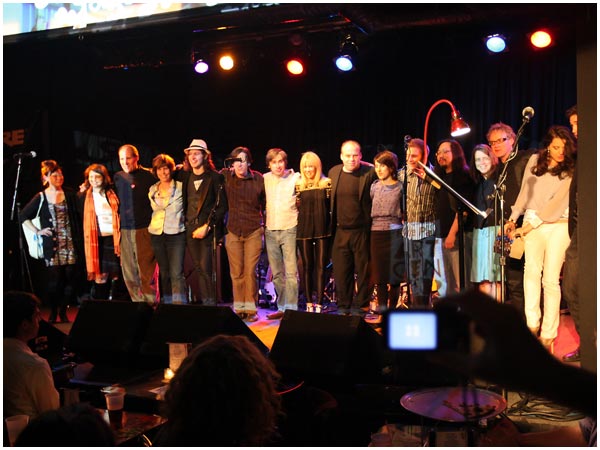 Final shot of all the presenters, gathered on stage for a final bow. Photo: Thorsten Bösch.

For the first half of the evening, my brain was shot. I was either too nervous before my talk to concentrate, or just a flurry of adrenaline afterwards. But after I got a drink during the beer break, I was able to relax a bit and take in the rest of the presenters. My favorites included the playful group presentation done by the band All Things Lucid, and another playful presentation by Ben Hollis (of Wild Chicago fame).

For a full list of the presenters, as well as links to their sites/works, check out the official Pecha Kucha Chicago, Volume 9 page.

Much thanks to all the folks who showed up and took a little time out of their evenings to attend. It definitely felt good to have friends in the audience, and to know you guys were there encouraging me on. Particular thanks to Allison, who attended though she wasn’t feeling so well. And also to Liz’s folks, Bob and Julie, who made the trek out from Frankfort just to see me on stage.

Finally, big, big thanks to both Peter and Thorsten, who took a chance on me. I had not been to a prior Pecha Kucha event, and they were still ok with me having a go at the format. It was a great experience, and I liked it so much… I’m planning on writing up a whole guide to how I prepared for the talk.

In the coming days, it’s possible I’ll get an audio recording of the event. I have plans to make a separate PK section on the blog, post up my slides, and to make a video that features the slides with the audio added in.

What a fun night.