I’m used to having my mail ripped open at the edges. It’s Chicago, and in some ways… it’s the price you pay for living here.

Over the holiday season (or with birthday cards), oftentimes you’ll see a little rip in the corner. It’s typically something small where someone could stick a finger in and open up the card within the envelope… and to see if there’s any money inside.

Usually when I see something done to my envelopes I shrug, I think “What can you do?” and move on. I get a little angry, but that’s about it. On average, I’d say I see a ripped envelope maybe once every three or four weeks. 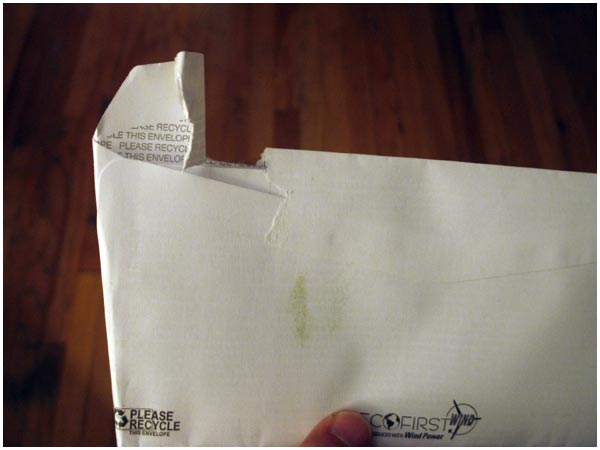 This was in my mailbox yesterday.

It’s not a huge deal, as the letter was a bill from Blue Cross, Blue Shield. Thankfully it wasn’t a bank or credit card statement. But still – regardless of the contents, I think I have a right to expect my mail will arrive clean and untampered with. Seeing this blatant rip (more blatant than usual, I guess) got me pretty upset.

What makes it worse is that, most times, my visits to the post office have been highly unpleasant. They typically involve encounters with rude or bored employees, who have little to no patience/empathy for the folks on the other side of the counter.

Don’t get me wrong – I’ve had a few great experiences. But on the whole, I’d say those good moments were rarities. Most folks I know HATE going to the post office.

My guess is companies like UPS and FedEx started because they staffed folks who weren’t gigantic jerks. Or maybe those companies took off because they didn’t root through everyone’s mail.

Wow, I’m finding myself getting more worked up writing this, than I was last night seeing that letter. I ended up calling the USPS and lodging a formal complaint. They took my info down, and at best… I’ll just keep calling everytime I see a letter that’s ripped.

Due to how many stops a letter makes, and all the waystations and different people in between… I’m sure it’s pretty difficult to pin the blame on, or catch, an individual. Still though – I’d love to hear how they go about dealing with this sort of thing, or if there’s just some large list somewhere that just keeps getting added to.

My grandma, whenever she sends a birthday or Christmas card, literally covers the back flap with stickers to prevent folks from peeking inside. At first I used to laugh when I received her letters, but now… it’s not so crazy a notion.

And sometimes, even those extra stickers don’t prevent someone from just ripping them off.