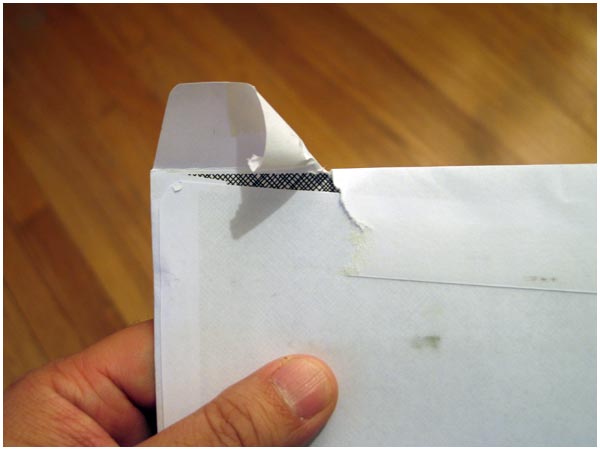 Believe it or not, I received this ripped envelope the day after I called to complain about ripped mail.

To the credit of the USPS though, their customer service folks were good – they took down my info, and I even got callbacks from the Post Office wanting to follow up with me about my complaint.

The callbacks happened the day after, and were persistent. The same woman called me back four times (I was in a lot of meetings during the day), and we finally talked about my ripped mail.

The explanation I received was that the automated mail sorter is old, and oftentimes rips envelopes. Technically, the local post office branch should be marking envelopes with some kind of stamp that indicates that they received the letter in this manner.

Plausible, I guess. And the tear indicated in this letter (above) looks like it could be machine made. I don’t know that I can tell, exactly, whether it’s man made or machine made. The woman who called me back said it was “probably” the machine, which feels like both an explanation and a blow-off at the same time.

Now that I’m comparing the two letters side by side (Rip 1 | Rip 2), I guess they do look a little similar.

Still though, it’s hard for me to know whether it’s man or machine made. I told the woman on the phone this, and said I’d still call in every ripped envelope, because to me… it looks like someone’s messing with my mail.

The woman promised to get the local branch to start stamping my envlopes if they received them ripped, and that my continued reporting would help trace the issue back to whatever problematic mail sorter was downtown.

I guess the one thing that’s odd to me (and I noted this) was that it’s not my junk mail getting ripped. The last one I reported was from my health insurance provider, and this one was from my bank.

Man or machine? Hard to say. Given the poor level of customer service I’ve seen/received at local branches, and how frustrating that experience typically is… it’s hard for me to give the USPS the benefit of the doubt.