In calling around to various animal hospitals yesteday, we found out that the original ballpark of $1,500 was on the low end for the surgery required. We got some estimates, and the new numbers put it somewhere between $2,500 and $4,000.

While Liz and I were prepared for something like $1,500… the newer numbers made us realize that, in all likelihood, we couldn’t afford the procedure (and all the related medical costs) that the dog needed.

Luckily, we were in contact with Mary from Northcentral Maltese Rescue. We found out that her organization takes care of found Maltese dogs, and that they would ensure that he got medical attention. In talking with Mary, she ended up showing her vet the x-rays that I posted, which was pretty neat.

The one catch was that Mary’s organization wouldn’t simply pay for the procedure. We would have to turn the dog over to them, so that they could then help treat it, and find it a permanent home.

While Liz and I have been caring for this dog, we hadn’t discussed fully whether we wanted to keep him or not. We were focused primarily on making sure he got medical attention, and in the whirlwind of the past few days… didn’t really discuss how we felt about taking on a new pet. Ultimately, we decided that we simply weren’t ready. Particularly with how things are right now, before the wedding and before heading out of the country… it’s just not the right time.

In arranging the hand off, I learned that Mary was actually located in Wisconsin. She mentioned a parking lot at the Gurnee Mills Mall, about 20 or so minutes NW of the city in Gurnee. I was a little uncertain about turning over this dog to a complete stranger, despite the fact that care was promised. It was all for the best, I knew, but I wasn’t 100% on who I was turning the dog over to.

Two specific things made me trust Mary, and feel confident that the dog was in good hands.

First, I asked Mary whether Liz and I might be potential candidates for adoption, possibly at some future point. I asked if that might be weird, since we were effectively turning over the dog, having them do and pay for the surgery, and then asking to adopt the dog again. Would we be good candidates, I asked her, even though we were the ones who turned the dog over to you to begin with?

Her answer was the absolute right answer, and the only answer: she said “We’d have to review your application, just like anyone else.” On hearing that, I felt confident that Mary would find the dog an excellent home.

Additionally, when we were swapping cell phones and the make/model of our cars… Mary mentioned that she drove an SUV, and that her license place was “Maltese 1.” This little fact pretty much sealed the deal. 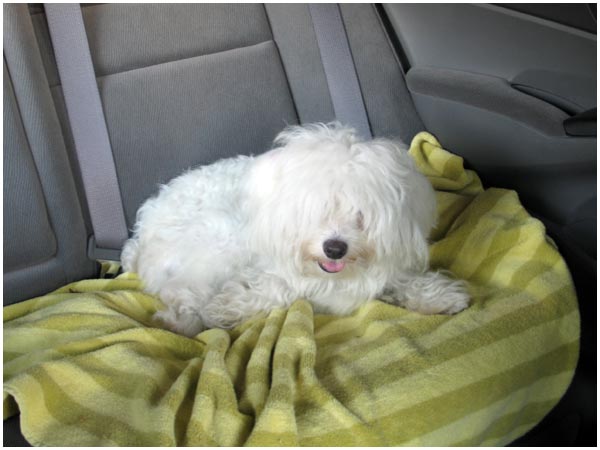 On the ride up. He continues to be incredibly laid back, and just hung out in the back seat the whole time, calm as could be. 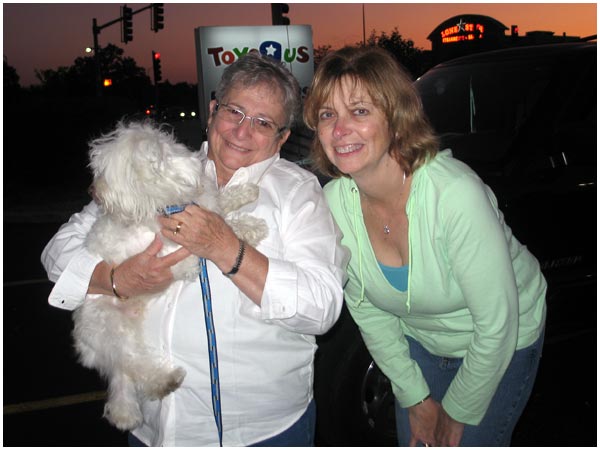 Mary (on the left) with her friend Mary. The dog warmed up to the two of them very quickly, and was excited as ever to get attention.

In turning over the dog, I had to fill out a document with some basic info – my name, the dog’s age, and the dog’s name. Up until now, we hadn’t given the dog an actual name. I’ve toyed around with some, but nothing fully stuck.

Because he looks so much like a muppet, with the overgrown hair in his eyes, on the official document I gave his name as “Henson,” after Jim Henson, the creator of The Muppets.

This was an extra tinge of sadness, having to give the dog a name before giving him away. 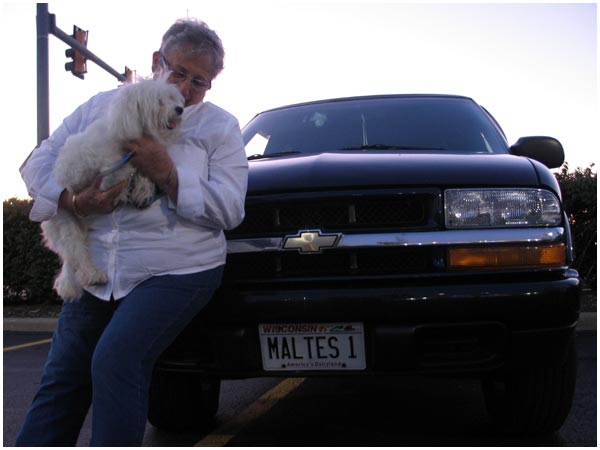 Mary, posing with Henson and the Maltes1.

It was a happy and sad moment, turning Henson over to someone else. While Liz and I felt responsible for his well being, we knew that Mary and her organization would be able to take care of him better than we could. Financially, the needed surgery was just too much for us to be able to take on. And in terms of the timing, I simply don’t feel we were ready for a dog.

I know that Henson is in good hands with Mary. I’ll post any updates I get, as to how he’s doing, post surgery. And when things are at a point where he’s able to be adopted, I’ll post that information too as several people I know (and several people who left messages on the blog) expressed interest.

Goodbye, Henson. Good luck with the surgery, and I hope you’re up and running soon.