For a really long time now, Liz and I have talked about getting another rabbit. Baxter has been on her own for quite a long time, and we felt that getting her a companion would be a good thing.

I’m sure this thought was spurred on by us meeting Liz Rench (aka the Rabbit Sitter), and seeing some of her rabbits who have “bonded” with one another.

So you know – not all rabbits get along with one another. But when two come together and do like one another, they end up pair bonding and (my understanding is) they’re together for the long haul.

With the wedding being such a big focus for so long, we finally felt like we had some time to call around to a few places, and to see where we might find a companion for Baxter. We got a good response from Red Door Animal Shelter (where Liz Rench works) and set up an appointment.

Essentially, this was a “bunny speed date” night for Baxter. We would be taking her in, and she would be meeting a few of the other rabbits there to see how things go. While “love at first sight” happens, it’s a rare thing we were told. So tonight may be the first in a series of trips, to get Baxter comfortable with the new environment, and to see whether there’s another rabbit that she (ultimately) gets along with. 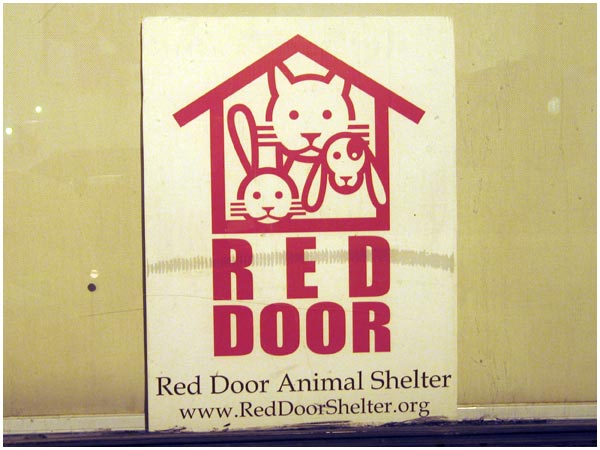 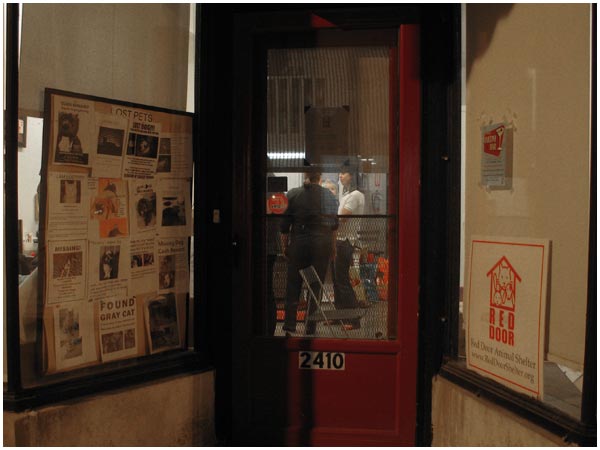 On walking in, we let Baxter out of the carrier and set her up in an area in the front entryway. We then were taken in back to see some of the other rabbits. There was, in fact, an entire ROOM dedicated to rabbits. Though there were plenty at the shelter, there were only a handful of boys (two girls bonding is common, but it’s more typical of them to bond if they’ve grown up together).

Walking in to this room was something else – fluffy cuteness, as far as the eye could see. The few photos I have here won’t do it justice, but the video (below) gives a good sense. 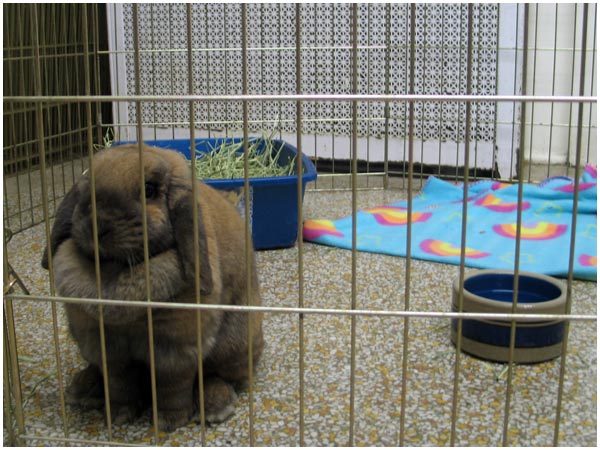 I’m not sure, but I think this is Latte. And he’s only slightly disapproving. 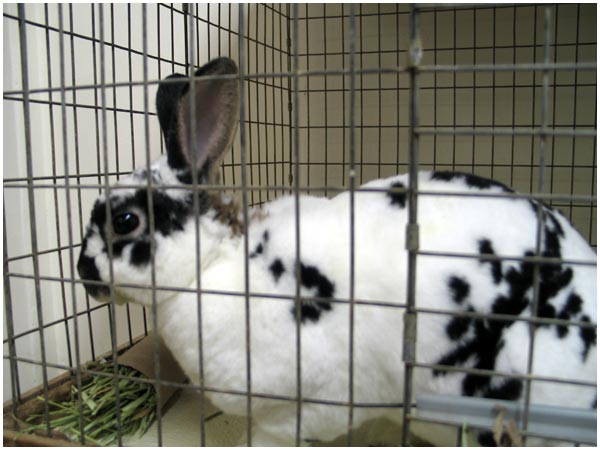 And I think this might be Beer Nut. Or, quite possibly, Dennis Hopper (I’m serious). If you want to check out some of the other rabbits (and their names), you can find them on Red Door’s adoption page. 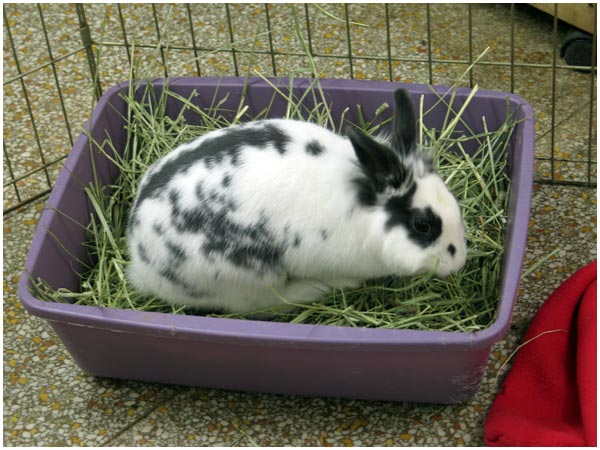 Can’t remember who this guy is. 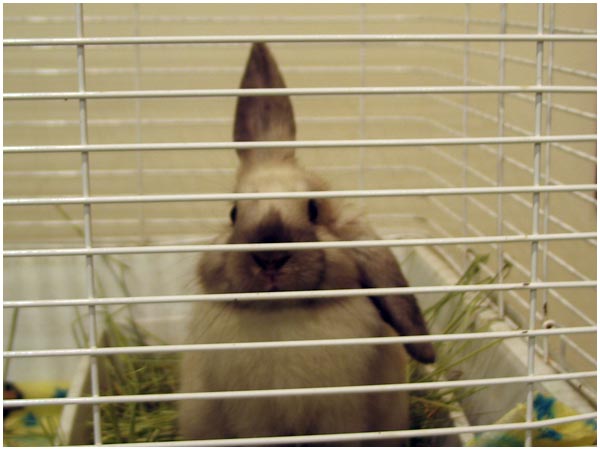 This guy was in the front room, and kept cracking me up. The one ear would occassionally stick straight up in the air, and I couldn’t help but imagine a tiny voice saying “What was that?” over and over again. 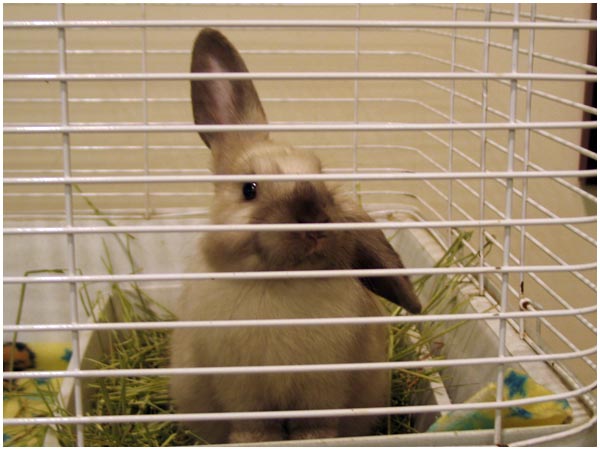 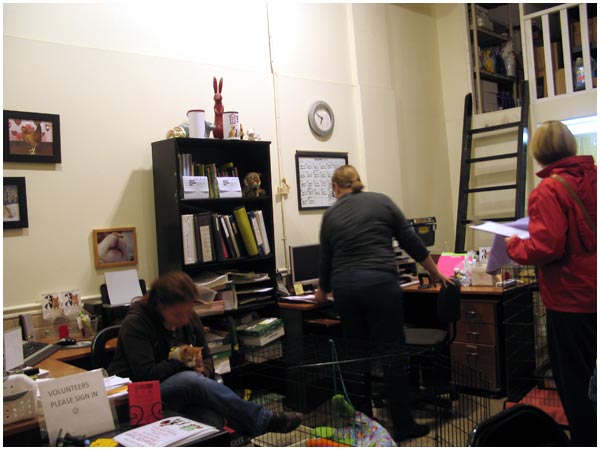 A quick peek inside the front office area at Red Door. 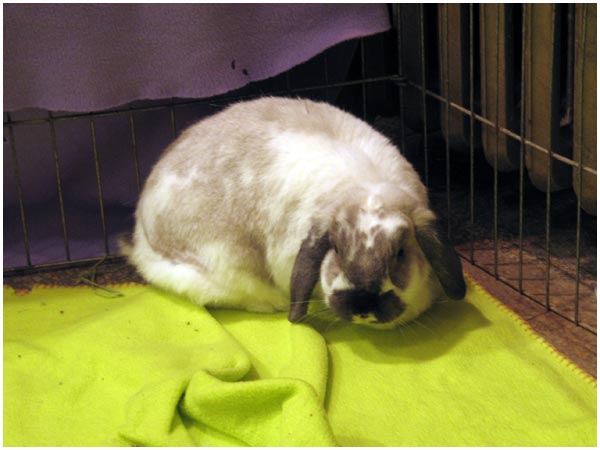 Poor Baxter, a bit nervous about being in a new place full of new people and new smells.

She was actually doing way better than we expected. After maybe 10 minutes, she seemed a bit more relaxed and was actually moving around and exploring a bit.

I was joking with Liz that taking Baxter to meet other rabbits was equivalent to taking your kid to school for the first time. You sort of secretly hope and pray your kid is’t some kind of psychotic, anti-social child… and really hope they get along with others.

We had some concerns that Baxter, being so used to living on her own, might end up being a more dominant/bossy bunny. So we had no idea what to expect when she got introduced to another rabbit.

Here are some videos of the various rabbit she met:

I felt like an idiot asking this, but after seeing some of the vigorous humping… I asked: “Did they… did they just have sex?” Turns out, the mounting is more of a dominance thing. All of the rabbits had been fixed, so there was no danger of baby bunnies. But the mounting I guess was more of a control/dominance thing (and females can just as easily mount males, as I understand it).

There wasn’t a lot of fighting or running away, which we were told was a good sign. At first, Baxter got pretty puffed up around the other rabbits… something she usually does when she’s not happy or stressed out. And to be quite honest, when I saw other rabbits sidle over and start humping away… I got a little concerned. I couldn’t tell if Baxter was happy or ok with things, or just sort of, uh… sitting there.

Again, we were told that her not running away or fighting was a good sign. And over the course of the evening, we started to see Baxter become more and more comfortable (which is why we brought out Beer Nut for a second visit). She slowly began to interact with the other rabbits, and started to move around a lot more.

So all in all, the first speed date night went over pretty well. We’re scheduled to go back over the weekend, and we’ll likely make a few more trips before we can find a good match. Keep your paws crossed.

baxterbunny rabbitsdatingfrisky animalsred door
« Cassette From My Ex (and Me, Briefly): Review and Interview on Amoeba Musc
The “Goodbye Internet Explorer 6” Cake Party »