I’m not exactly sure what happened, but sometime yesterday afternoon a lot of sirens and firetrucks pulled up on our street at State/Jackson. We usually get a fair amount of sirens downtown, so I initially shrugged things off.

But then, a few moments later, I was walking past the windows and noticed a bunch of folks gathered around. When I got closer, I saw that there were a ton of people exiting down the fire escape of a nearby DePaul building.

It’s not in the video, but folks noticed a small flashing light a few stories up (possibly a triggered fire alarm). There was no visible smoke anywhere, and it seemed like the people exiting were only coming from one floor.

It was still a bit spooky. We’re up on the 7th floor, and I think the people exiting were from an even higher floor than us. I can’t imagine going down those stairs from that high. 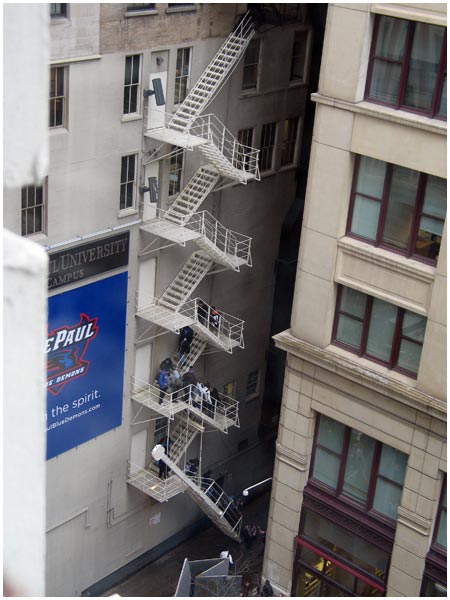 Folks exiting to the street.

I did a quick search, but didn’t find any news of this anywhere. Still wondering what the deal was.