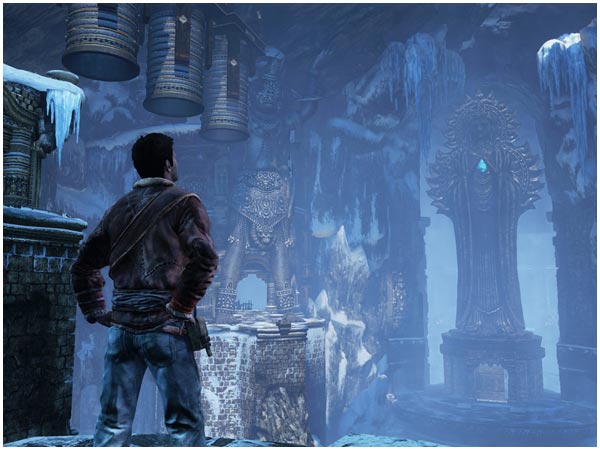 I purchased Uncharted 2: Among Thieves for the PS3 over the weekend, and holy crap – this game is pretty jaw-droppingly awesome. I’ve only played for a few hours, but I’m excited enough by it to post a quick review. This game makes me happy I got a PS3.

I was a little hesitant before picking up the game. I had heard of the original (Uncharted: Drake’s Fortune), but never knew too much about it. I thought it was mostly a Prince of Persia climbing type of game, and largely ignored it. In looking back, I think I was way off base.

Overall, the story is more akin to something like Indiana Jones. There’s a bit of a treasure quest, and the search for a lost city, rare artifacts, and an ever-changing backdrop in terms of locations. This game, in my opinion, is as much about story and cinematics as it is about buttons and trophies.

The game opens with the main character, waking up on board a train. From there, the first 5 minutes of game play are pretty spectacular and action-packed.

For a lot of games, there is a distinct difference between the game play and the fancy shmancy game trailer that gets released at E3. This game though? I think the shift between cinematic trailer and game play is very subtle, and actually makes the whole game feel like an actual movie.

Adding to the great visuals, the camera angles that accompany the game do a good job of blurring the boundaries between game and movie. Something as basic as the main character walking down a corridor ends up actually looking pretty slick, with the proper angles.

Similar to a game like Assassin’s Creed, the character movement (all the jumping and ledge dangling) seems fluid and natural. There’s no button mashing, as the travel from point A to point B just feels really smooth. 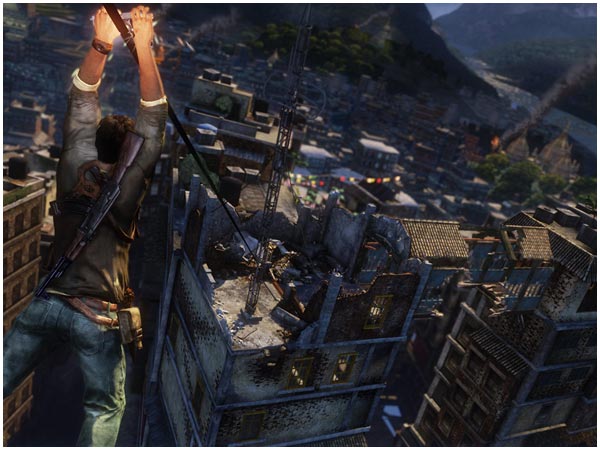 The whole game itself comes off as Hollywood slick. I haven’t gotten a chance to really get to know the characters, but so far there have been some pretty interesting and funny dialogue (better than your average game).

A great test for me, in terms of a video game’s draw, is my wife, Liz. If the game’s storyline and game play is interesting, she’ll end up on the couch next to me, watching the whole time. She’ll never want to play the game, but if it’s captivating enough… she’ll sit and watch, just like a movie.

She did this for Brütal Legend. And she got hooked right from the start of Uncharted 2. As someone who’s not all that in to video games, her sticking around is a pretty strong endorsement.

Out of all the games I’ve played and all the trailers I’ve seen, I’d have to say that Uncharted 2: Among Thieves is probably the one game where the trailer and the game play come pretty close to matching.

I’m used to there being short video interstitials between levels, but this game really overdelivers on this front. There were several points in the game where I (happily) set down the controller and got lost in the characters and the unfolding of the plot. And there were a few times where I suddenly realized that the video portion had ended, and now it was time for me to pick the controller back up.

I have to say it again: this game so far has been pretty amazing. It really feels like a movie.