Bunny Bonding in the Sun Room

Ever since Quincy joined us, Liz and I have been trying to get him and Baxter to bond. We’ve been off and on with this bonding process, and as of today the two of them are still in separate pens.

Overall, the bonding sessions have been pretty good. There was one really bad fight between them, but that was maybe 4 or 5 months ago. The worry in simply putting them in the same pen and letting them “work it out” is that if things go bad, it could get really bad. If we’re not around and the two of them get into a serious fight, it’s bad. Like, take someone to the vet bad.

So far, things go reasonably well when they’re together. At most, the aggression has been on Baxter’s part: she’ll nip and bite at Quincy sometimes, when she’s annoyed or if Quincy is being particularly pushy. He’ll often tuck in close to her, and push his head under hers (a dominant move, trying to get Baxter to “groom” him).

At the old apartment, we tried a variety of different techniques and locations. We originally introduced them on top of the bed, and also set up different areas around the apartment (in “neutral” areas that both hadn’t been to before). We also tried taking them on car rides, prior to the bonding sessions.

At the new place, we’ve tried two different hallways. Again, they get along pretty well… but nothing suggests to us that they’re “bonded” yet. It’s kind of tough, as it’s not entirely clear to me what signal or sign we should be waiting for.

Right now, they seem to get along ok in the same space. But a week or two back, Liz and I returned from the kitchen to find a small bit of Quincy’s fur on the ground. Obviously something had happened, but neither one of us heard anything. Beyond that incident, things have been pretty tame.

The one thing that is a definite sign of bonding is if one of them begins grooming the other. Liz has asked around a bit online, and some folks seem to feel that if the two rabbits can spend so much time in each other’s company… they pretty much are already bonded. We’ve had long sessions with the two rabbits in the same space, and they’ve been good sometimes for up to 6+ hours. While they’re mostly ok, there’s still some hesitation our end to combining them… given some of the small biting that Baxter still does.

This weekend, we tried another location. In the sun room, we put two of our chairs together and made a little enclosure. This was a much smaller space, but things seem to go pretty ok. 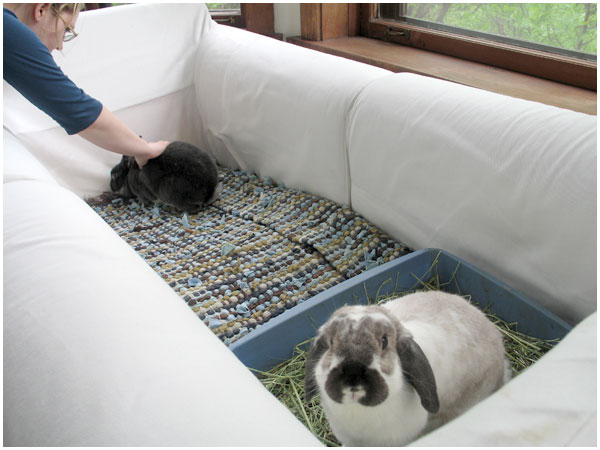 We were a bit worried about them jumping out, but beyond a few exploratory stretches… the bunnies were content enough, and just milled about the space. 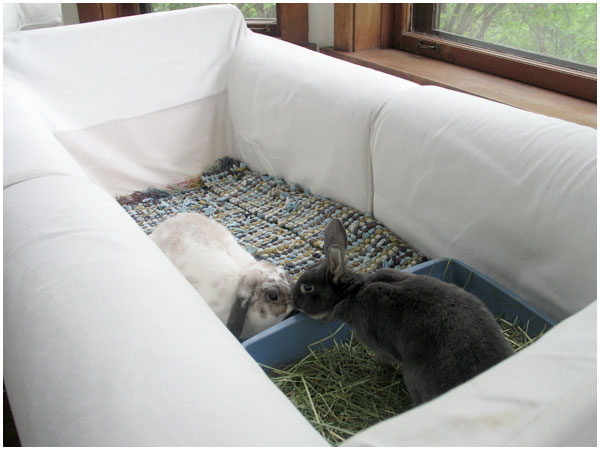 A rather cute moment.

This particular session went on for a good while, and was generally positive. Liz and I got to talking, and it seems that we need to be more consistent about setting up these sessions. We only tend to do it sporadically, a few times per week (as each session requires someone to sit and watch them, to make sure they don’t get into a serious fight).

The eventual goal is to relocate both to the sun room. But until we see some grooming, my sense is we’ll be trying to bond them on a more regular basis.