Month at the Museum Contest: Filming My 60 Second Video

So I’ve officially decided to apply for the Museum of Science and Industry’s Month at the Museum contest. Of the many things required of each applicant, one thing is a 60 second video – telling the museum a bit about yourself, and why you’d be a good candidate.

After work yesterday, Chris and I headed over to his place to do the video shoot. 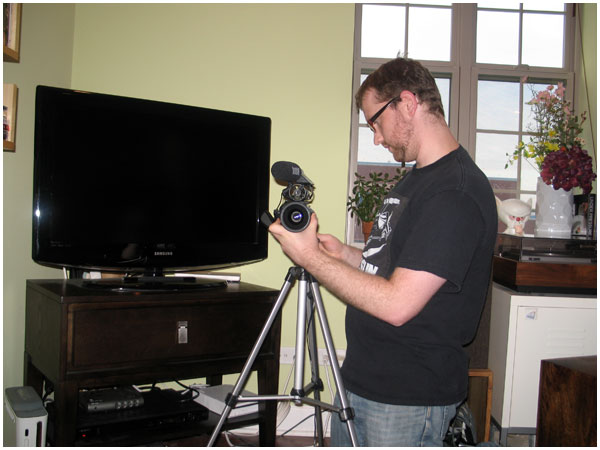 Here’s the view from where I was sitting. We did the shoot in the living room, with a “Chicago” poster in the background (which I thought was a nice touch).

It was a little odd, “performing” to a camera (my first take was really quite stiff). But as I relaxed, I began to get into the process more. My mistake at first was trying to remember the litany of things I had written down for my script. I was so focused on reciting through everything, I forgot to express just how excited I was.

The subsequent takes were a lot better, and we ended up stitching pieces from various takes to build the final video. 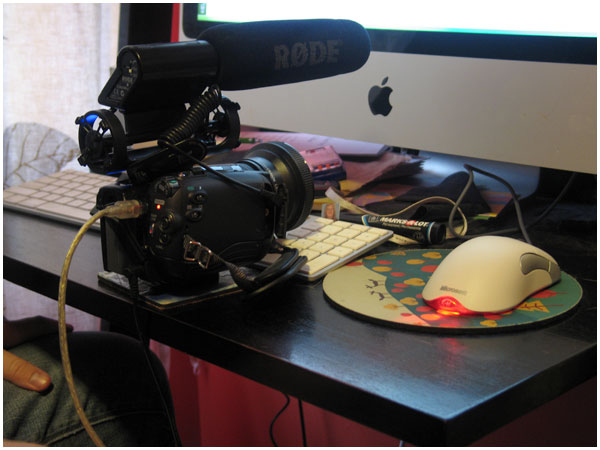 This is the fancy camera and mic Chris used for the recording. After we did a few takes, we switched over to the office to pull the video over to his mac. 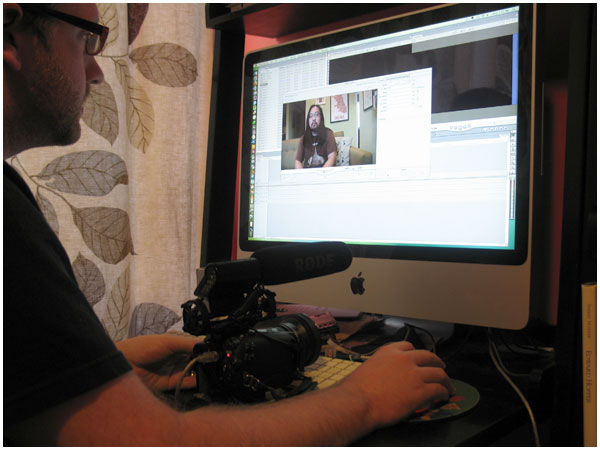 The editing phase. It was really neat to watch Chris work, moving around audio and video and images on the main timeline. Though I’m familiar with Flash (and the concepts are pretty much the same), video editing is very much a different skill.

We chatted throughout the process, and it felt good to me that the suggestions I was making always tended to align with what Chris was thinking as well. We both share a similar sense of humor, and I think that will come through in the final video.

An encouraging sign for me is that, even when we were reviewing the video all the way through for the umpteenth time, there were still segments of it that made us laugh.

I’m excited to have arguably the toughest portion of the application close to finished. I still need to provide some larger images for Chris to weave in, and maybe some fine tuning… but it’s very close.

It’s difficult to contain my excitement, and I’m trying hard not to get too excited by things. This is a national contest, with people from all over applying. While I think the requirements (60 second video, 500 word essay) will likely deter many and weed out the less than serious applicants… you’re still looking at a pretty large playing field.

I honestly feel like few others can compare with me on the writing and blog front. And my hope is that my experience running a blog for eight years, coupled with the fact that I like (and am good at) writing will count in my favor. Hopefully it’s enough for me to get a foot in the door, and make it to the semi-finalist round.

I’m excited to share the video with everyone, but the final version won’t be done for a little while yet. I’ll post it up on Vimeo right after I send it off in the mail – Monday or Tuesday next week.

Related:
(Thirty) Nights at the Museum: New Contest From the Museum of Science and Industry