We had a pretty big day at work today, with not one but four people getting awarded a watch from our company’s CEO, Jeff Smulyan. Watches are awarded after an employee achieves 10 years of service, and we had four people in attendance who got to receive those honors.

Mike and Phil hit their 10-year mark a year ago, but at the time… our company had put a hold on watches. I’m happy and very proud to see them included in today’s ceremony, and to finally, officially receive their recognition as well. 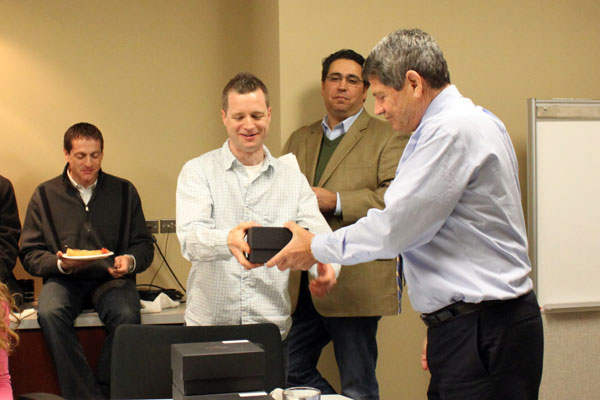 Jeff, presenting a watch to Phil. Starting as an intern, Phil worked his way up and eventually became an online/on air personality known as Twitch for Q101. He, along with Anthony, were the original Q101 webmasters as well. 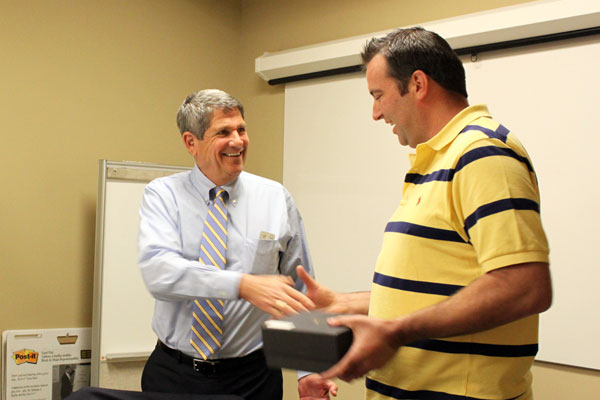 Brian, receiving a handshake from Jeff. Brian started his career out west, and worked a lot from LA and for Power 106. Like Phil, he’s definitely one of the old school folks who now with Emmis Interactive. 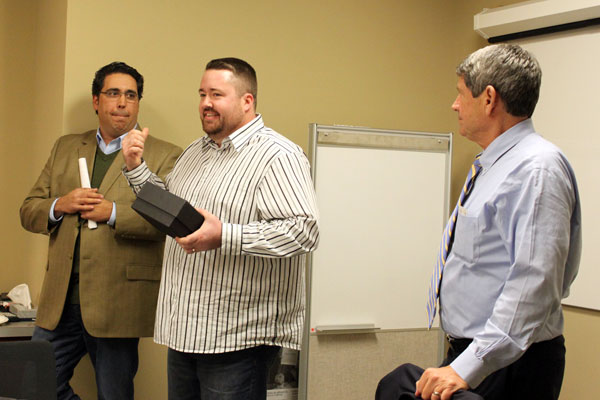 Mike with his watch, and talking about his team. Prior to coming over to the Interactive side, Mike worked alongside Cathie and helped run the Q101 Marketing team, when Rey was there. 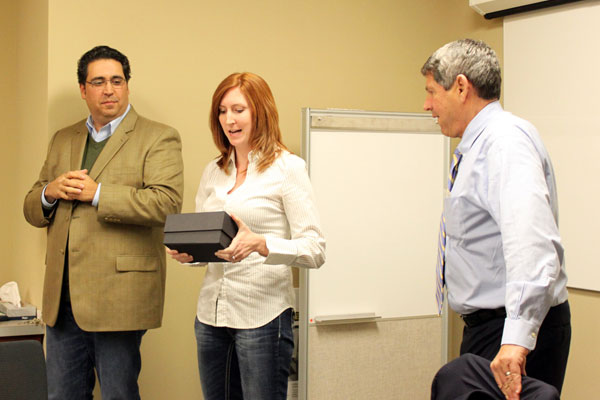 Katie, receiving her watch and reflecting a bit on how she came to be in radio. Like many others, she worked at Q101 before making the shift over to Interactive.

I should mention too that, after each employee was given their watch – both Rey and Deb got a chance to speak a bit about how they met, how they grew within the company. It was nice to hear a recap, and to learn a few things about the early days. 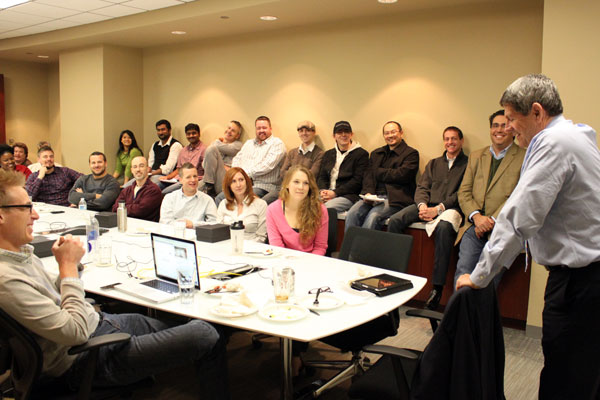 After the watches were given out, Jeff took a lot of questions from the rest of us during a Q&A session. He spoke about his thoughts on the radio industry, where he sees it going, and some of the possibilities that are in store for both Emmis and Emmis Interactive. 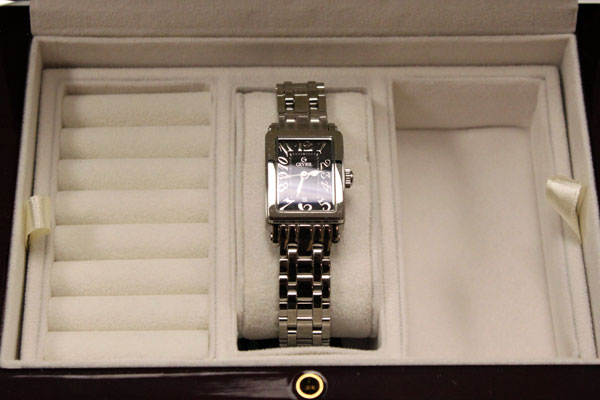 Here’s a closeup of Katie’s watch.

Phil, Katie and Mike trying on their new timepieces… 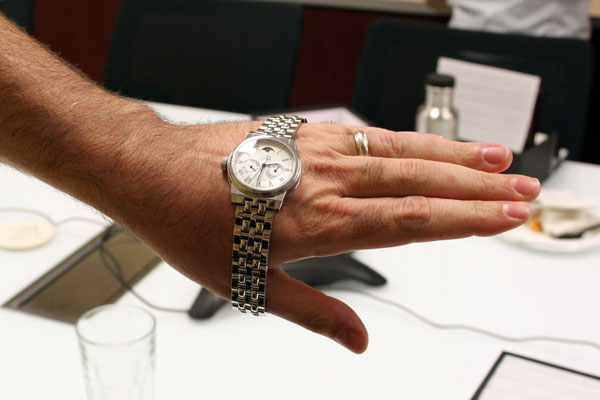 A closeup of Brian’s watch. 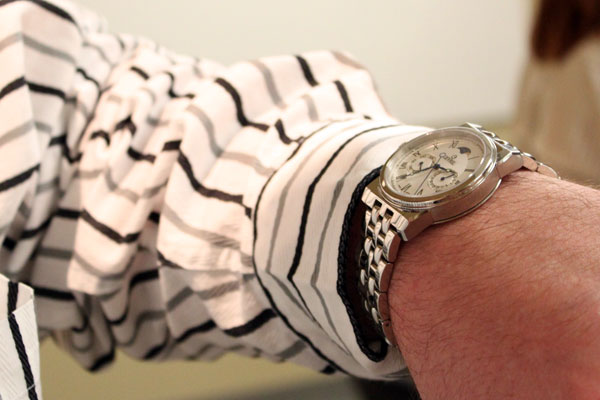 Mike’s watch. It’s hard to see, but there are engravings along the side of the watch – each one includes the recipient’s name, along with their start date. 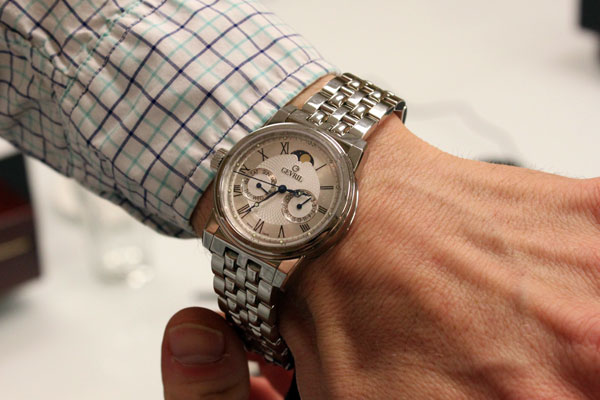 Phil’s watch. He, like everyone else, was surprised at the overall weight of these guys. 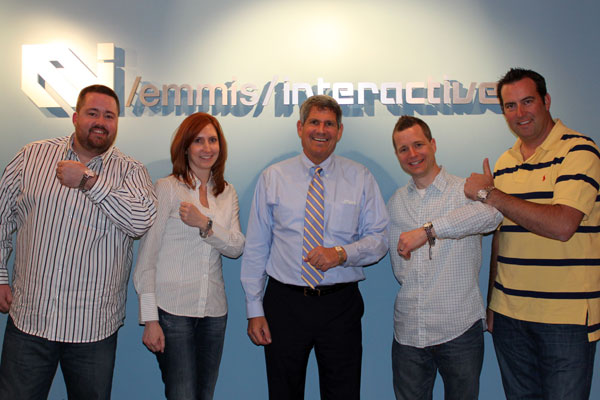 I tried looking through a lot of my old photos, to see if I could track down the first appearance of each person who got a watch today. I’m sure I have some earlier photos, but the ones I came up with were:

10 years is a long time. It becomes even longer when you refer to it as a decade. But looking back on where I was ten years ago, it seems like the blink of an eye. It seems, paradoxically, both things – a very long period of time that, when remembered, seemed to go by faster than expected.

I like that our company takes the time to recognize this sort of achievement, and that spotlight falls on the individuals who hit this mark. I also like that our CEO took the time to come to Chicago, and present the watches himself. Emmis prides itself a lot on the people who make up the company, and no truer words could be said.

Congratulations, all of you! Well earned and well deserved!