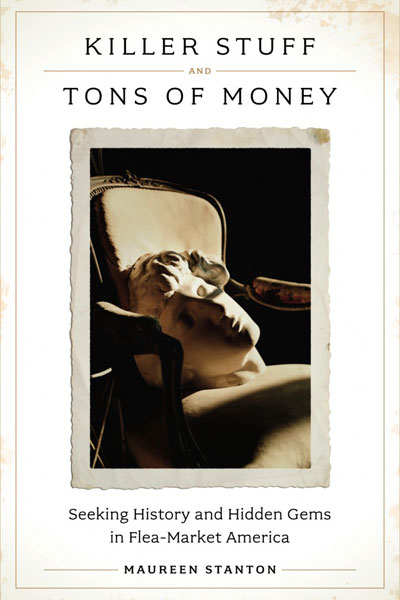 Killer Stuff and Tons of Money: Seeking History and Hidden Gems in Flea-Market America (Penguin Press) provides an intimate glimpse to the world of antiques, and the people who buy and trade in these little artifacts of history. Written by Maureen Stanton, the author follows antiques dealer Curt Avery from location to location, in search of old and valuable objects.

Friends from college, the two of them met again in 2000 when Stanton agreed to fly across the country to attend an auction with Avery. There, she served as his proxy bidder (there were some antique bottles he was after). Not wanting to be recognized in the crowd, Avery had Stanton place his bids while he hid in the back and signaled his instructions to her. This introduction to the world of antiques fascinated Stanton, and she began delving more into what she describes as “the ‘flea realm.'”

She (very) recently got a nice mention via ABC/AP. Here’s a bit from the review:

Curt Avery buys and sells antiques at flea markets and shows. He knows his stuff. He can date a watercolor to the 1890s by the style of the fishing pole it shows, or a stitched sampler to the late 18th century by a quirk in the lettering.

His knowledge gives him an edge, letting him buy, say, a piece of stonewear from a shop and selling it later for $1,000 profit.

I should mention at this point that I know Maureen. She and I were students together, both of us attending the Creative Writing program at Ohio State University. Where I was studying poetry, she was studying Creative Nonfiction.

Over the course of our time together at OSU, I got to read a lot of Maureen’s writing. I can say without hesitation that she’s got a great voice, and is an excellent writer. Though I haven’t read the book yet myself (just ordered it yesterday), I wholeheartedly recommend you pick up a copy. Consider this blog post as me, officially vouching for her.

That said, don’t just take my word for it. How about some credentials? She’s been published in Creative Nonfiction, Fourth Genre and Iowa Review, among other places. Three of her essays have been listed as “notable” in Best American Essays (1998, 2004, 2005). And she’s currently part of the faculty at the University of Missouri’s CW program, as an Assistant Professor of Creative Nonfiction.

I told you she was good.

I invite you to check out the book’s official website. You can read a few reviews, and also get a sense of Maureen’s writing style through her Bonus Material section.

You can also find out more about Maureen on her site. She’s got a nice summary of her work, along with links to several other essays that are available online.

I’ll leave you with a small video Maureen took, while at the Brimfield Flea Market. This is an old fashioned phonograph dancer, and it’s all kinds of awesome: