Glitch: Waiting for the World to End 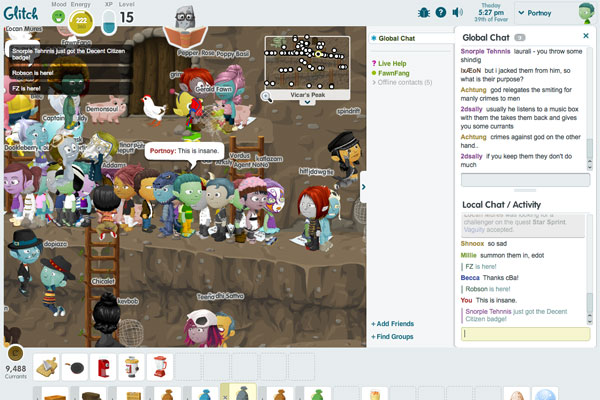 So I totally binged out on Glitch over the weekend. I’m not sure why, but I spent a lot (and I mean A LOT) of time going about completing small quests and slowly leveling up.

The game is very much a grind-y one, but for whatever reason… it was incredibly satisfying. I hooked up a few folks I know with invites, and even chatted with Chris in-game, briefly on Saturday.

The game window was set to close today, around 6PM CST. I was online when the big shutdown was taking place, and found a large group of people gathered at a location called Vicar’s Peak. Hanging out there, tons of folks were running around, chatting, and generally doing the kinds of things you do while waiting for the world to end.

I’m starting to wonder if I’ve gotten addicted to this game. There’s something super appealing about this sprawling world, full of small and interconnected tasks. I’m looking forward to going back.

Related:
Glitch: Browser-Based Game Of Exploration And… Pig Petting
Ark: Dark Animation About The End Of The World
The Rapture, Mary Poppins, And My Fear Of Strong Winds