Things Do Not Go As Planned: Interview

Had an interview today, with my friends Justin and Ben. Their company has been looking to hire on some more people, and Justin’s been excited (as have I) of the prospect of us working together. The three of us met, talked a bit about the specifics, and got a bit geeky. 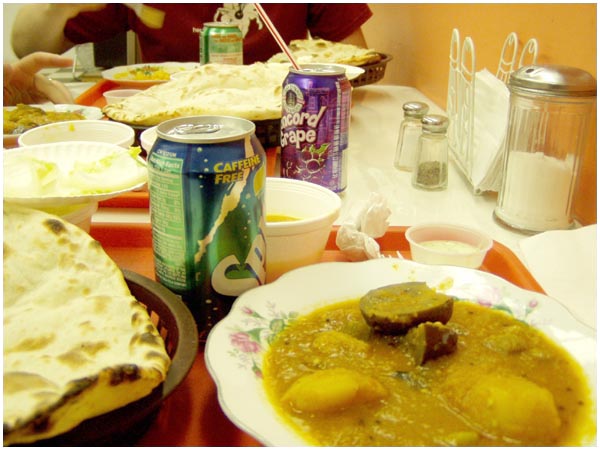 I forgot the name of the restaurant. I got what Ben got: an eggplant and potatoes dish. Not too spicy, but since I’m a big fat wuss (according to Justin), I did get the nose sweats a little bit. My sister, she can drink tabasco and not even blink; somehow the spicy gene decided to skip me.

When we get back to their office, I meet very very briefly with Rey, their superior. At this point, Justin and Rey get into a very long, heated discussion about how they’re going to handle the next few weeks. I stood stood there unsure whether I should be listening, or pretending to not listen.

It was a bit awkward for a good long while – as both Rey and Justin were very committed to their ideas, and neither one wanted to budge. The short of it is that it was a tense, tense conversation they had – and not the kind of "interview" that I expected I would have with Rey.

The position I’m shooting for is, initially, a reduced version of what Justin is doing: site maintenance, site migration, basic programming. A bit outside my ken, but both Justin and Ben assured me that I’d be able to handle what they needed. A lot of the early phases of the proposed position would be pattern recognition and basic coding. With Justin’s programming background and Ben’s design background, working with them would be an utter dream job. I’d be able to learn an enormous amount, just hanging around them.

The trick then, it seems, is where my "fit" and "value" are, if Flash is my primary area of expertise. This, I’m sure, caused some hesitation on Rey’s part. I guess we’ll see how things turn out. Right now, everything seems out of my hands; despite my hopes and interest and how cool it would be to work with Justin and Ben… there are other powers at work. Justin is one of them; Rey is another. They’re both working hard to determine the best interests of the department/company… whether I’m a part of that best interest, I guess we’ll see.

« Strange Realization While Riding the Blue Line
Note to Self: When Girls Talk to You, Even Jokingly… Talk Back You Idiot »