As I’m waiting for the train, a woman steps next to me and we start talking a bit. She tells me she’s from San Diego, and has just moved to Chicago recently. Today, it turns out, is her first foray using public transit. We compare maps, and determine that she’s to get off at the Monroe stop. We chat a bit, discussing our respective backgrounds, work, education, the usual. As I’m heading downtown to finalize a few weeks of contract work, she’s headed to an interview for a teaching position (high school). I tell her she’s a masochist, and she laughs. When I talk about what used to be my commute to the suburbs, she calls me the same. :)

The train is taking its sweet time, and more people show up on the platform. Figuring it may be my only chance to ask, before we get onto a shaky, moving train… I ask her if it’s ok for me to take a picture of her tattoos (which are amazing). 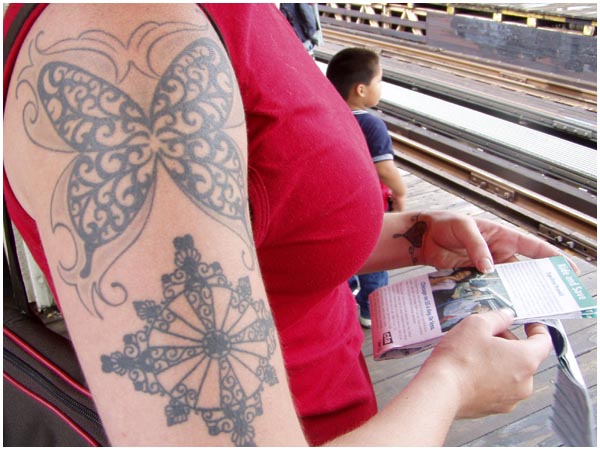 Like I said before, I’m a sucker for symmetry.

So… once we get on the train, we realize it’s packed. I mean, standing room only, and I’m almost being pushed into the doors. Sometime along the way, I decide that I’m going to pass along this blog address to her. I figure, it’s slightly less creepy than some stranger asking for her phone number. So I write it down, and pass it to Heather. We get to talking a bit more, and we realize we live fairly close to one another. A few blocks away, actually.

Here’s another interesting twist: near the Grand stop, the train comes to a halt and the conductor announces that everyone needs to get off the train. The Blue Line, heading into the city, is shut down. Later, I find out that it was due to some flooding. But at the time, we’re all told to exit and head up to the surface. Everyone is supposed to take a shuttle bus, apparently. If you can imagine a ton of people slowly moving up an escalator and a few flights of stairs, this is it: 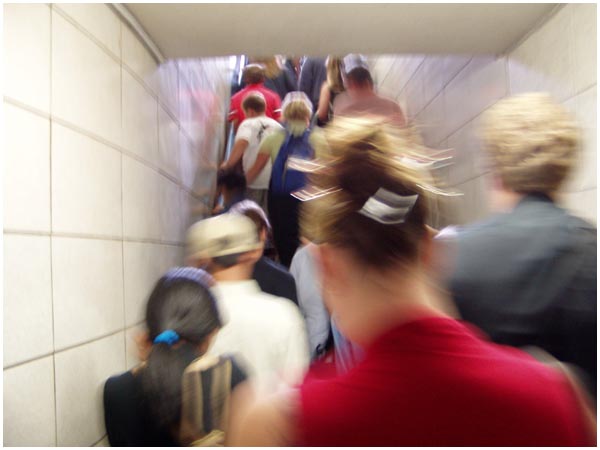 Once up top, Heather jokes about her bad luck and offers me a cigarette! Doh! Wished I still smoked. When I tell her that I quit, she asks if I drink at all. Hah! Funny! She then says that, since we live so close, we should go out for drinks sometime. I figure – cool! A bit later, I ask if she’s still serious about the drinks offer, and give her my number. She gives me hers.

Here’s what the surface looked like, once everyone got up top: 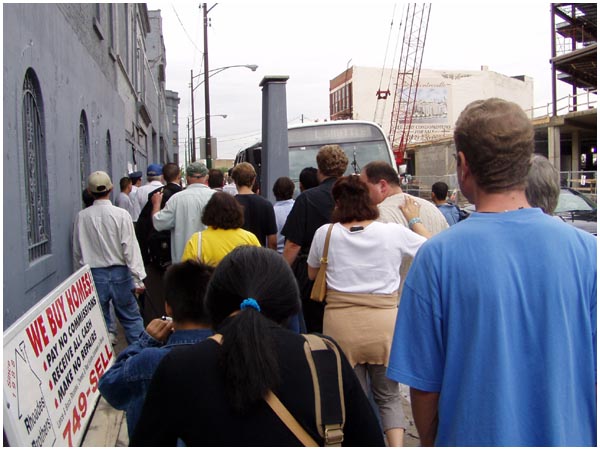 It takes a while, but we finally board a bus. It, like the train, gets packed and we leave the intersection of Grand and Milwaukee. I was lucky enough to sit in back, against a big window: here’s a video clip I took of the bus leaving (warning: 1.5 MB).

As the bus moves along towards downtown, I keep trying to catch streetnames as we drive by. I’m still not that well acquainted with downtown (though I tried to pretend like I was to Heather). I ask another passenger to assess where we are, and he helps me pinpoint our location. You’d think the driver would announce stops, but the bus just moves along, of its own volition, and stops sporadically at streetcorners. Near Monroe and LaSalle, the helpful gentleman suggests that Heather exit the bus. In hindsight, I feel I should have exited too, and helped her find her way. But the guy who helped us out promised to point her in the right direction, and I stayed on the bus… late for my meeting.