Today, Justin and Ben split off; Justin worked with Matt and Ben took me under his wing. We had an early staff meeting with Rey to discuss department goals and timeline stuff. Standard business fare. Since the computers were still delayed, Ben decided that I should get moving on a Mac. I’m getting a PC – but the bulk of what I’ll be doing will be on a Macintosh. Anyhow – we find an old machine and fire the thing up. So begins the slow installation of programs (Dreamweaver MX, Flash MX, BBEdit, Photoshop… the usual suspects).

Ben shows me around one of the sites, and gives me a brief overview of things. Come tomorrow, he says, I’ll be driving and he’ll coach me over my shoulder. As he sifts through folders and explains the hierarchy, I take notes and scribble down names and descriptions. The entire process is slower than molasses – and Ben talks Rey into letting us use a spare iMac that’s lying around.

Apparently, the iMac has been sitting in a "prize closet" for a while. It’s outdated, and the chances of it being given away in a big promo are slim. So… we "liberated" the iMac.

Back, we load up the iMac with all the apps… pretty much repeating the installs that we did earlier in the day. But check this shit out. This… this monstrosity, is the computer I’ll be working on: 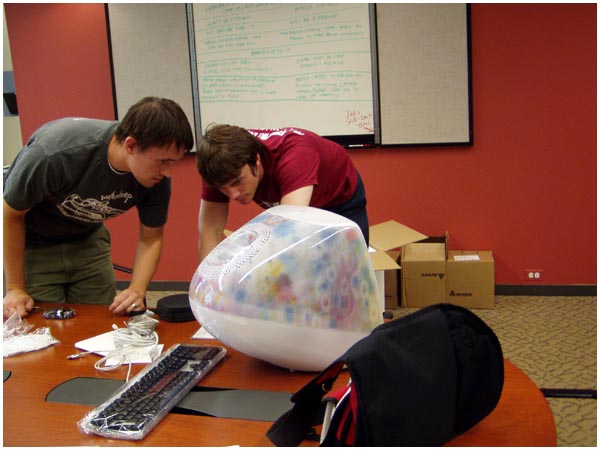 That would be Ben on the left, talking with Justin… the two of them examining the FLORAL PATTERNS ON MY COMPUTER. Imagine then having a debate on how much of a sissy I’m gonna be… trying to rank my sissiness on a scale of one to ten.

And get this – after we install everything, I notice a few errors due to "insufficient memory." Turns out… the iMac has only 64 MB of memory! Eep!

So – Ben is bright enough to suggest we raid the older Mac, and we load up the 384 MB onto the iMac. All is well with the world, once more.