I showed up in time to meet Alex, Dave, and a small group that I didn’t know at all (Travis, Woody, Mariano and Carolina [pronounced Carol-eena]). I didn’t really talk all that much with them. We stood a while outside of Lula’s, and everyone decided they wanted to grab a drink. I walked along for a while, and after we got about a block… realized that I wanted to stay and try to take pictures. Since this is a big event, we never saw each other again. Ah well – below, a few snippets of what happened at the event. Lots of fun, I froze my fingers off (it got cold!), and towards the end couldnt’ take a photo to save my life.

For those who aren’t familiar with Redmoon, it’s an outdoor event that celebrates/remembers the dead. The traditional stages of death are represented in various ways, mainly through outdoor exhibits/installations. There is a big show that happens near the end of the event – which I’ve got some video of.

This year, I didn’t pick up the brochure and read up on what each station was. Instead, I decided I just wanted to wander around and take snapshots of everything. The entire event has more structure than I’m letting on, and there’s much more meaning behind each exhibit/station. But for my money, I just liked watching everyone else… and that’s exactly what I did. If you’d like to know exactly what the whole event is about, swing by Chicago next Halloween… and we’ll go. 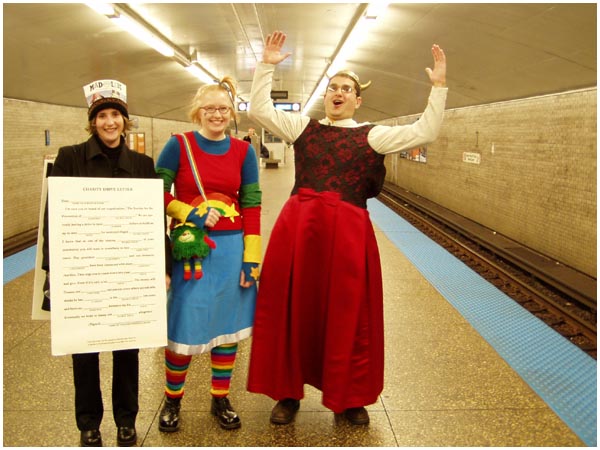 Saw these folks on the Blue Line travelling to Logan’s Square. It was the Rainbow Brite costume that caught my eye. They were nice enough to pose for a blog pic. Left to right, it’s a Mad-Libs Sheet, Rainbow Brite and… uh… a Viking? Awesome shit. After a whole day of downtown businesspeople giving me dirty looks… it’s nice to be around freaks again. 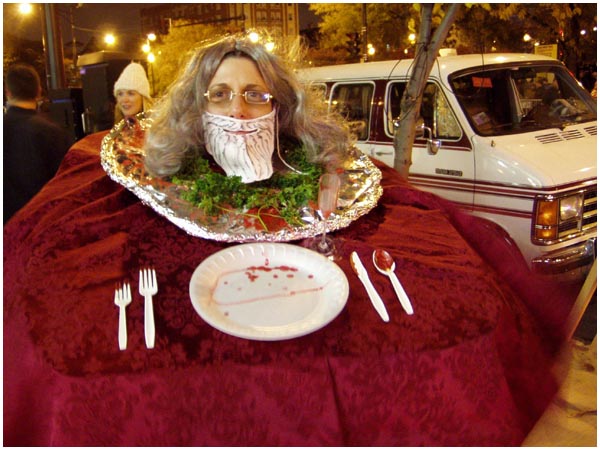 Not sure what she’s supposed to be, and I frankly don’t care. Fantastic! (maybe John the Baptist?) 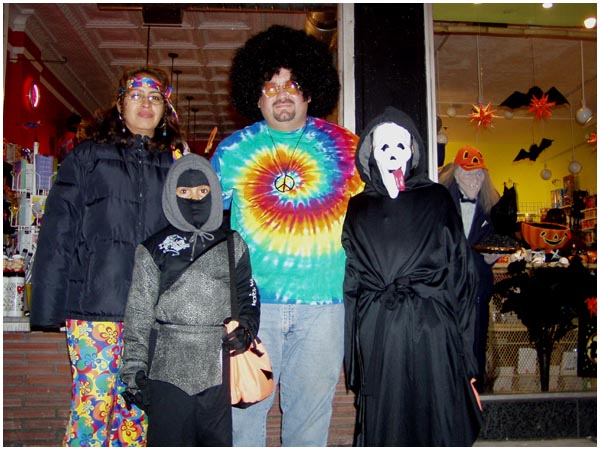 Every five year old, at the core if his/her being, knows that ninjas rule. It’s an immutable, universal law. 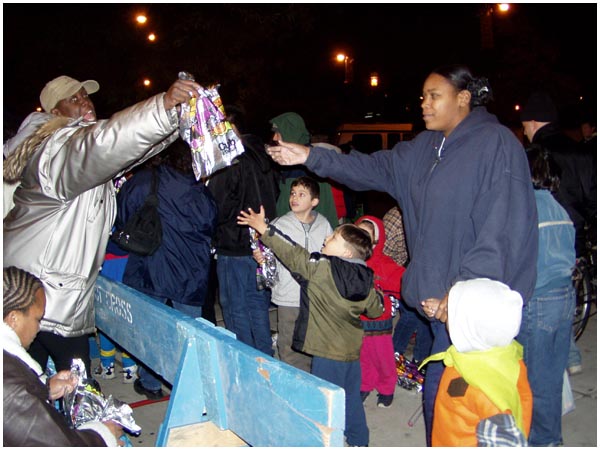 This lady’s job was to hand out bags of candy to everyone, adults and kids. And she was handing them out… like… it was her job. Actually, someone mentioned it may have been a man with a rather high voice. At any rate, it was interesting to see how difficult, at times, it was to give away free candy. A lot of people were wary. 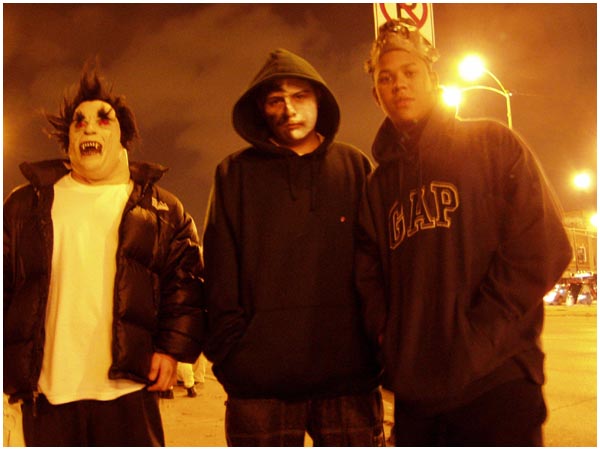 These kids were fascinated with my makeup. I like this shot. 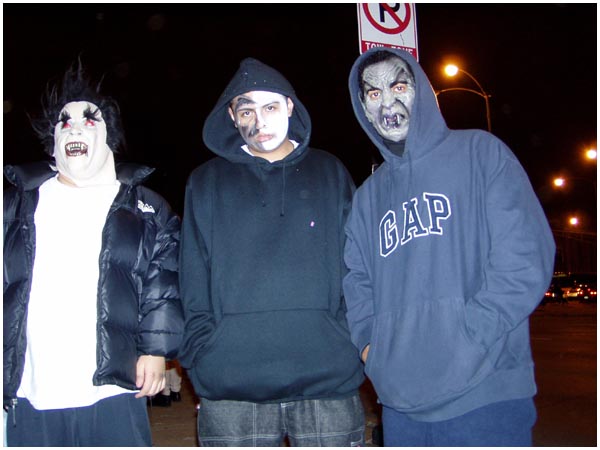 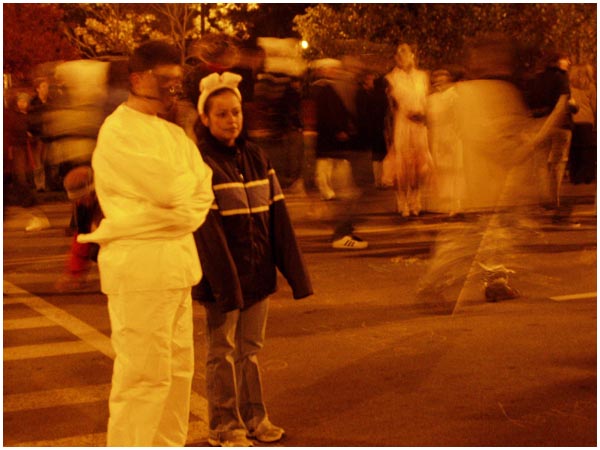 One of two Hannibal Lector’s I saw tonight. 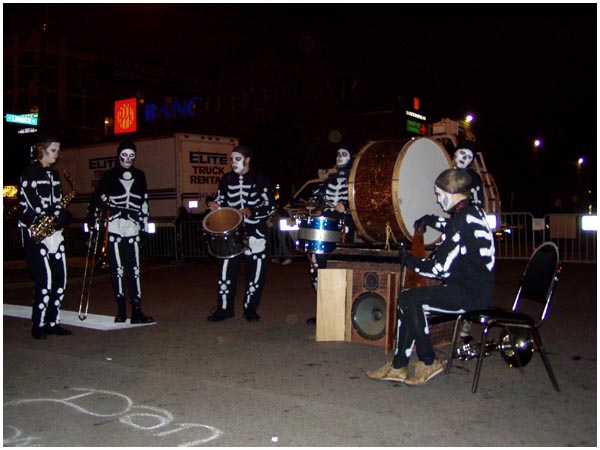 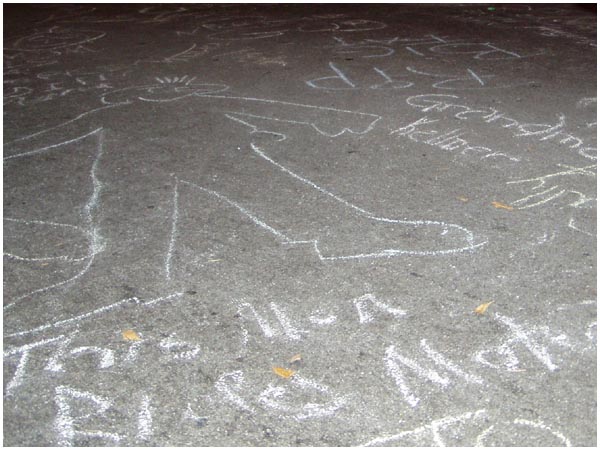 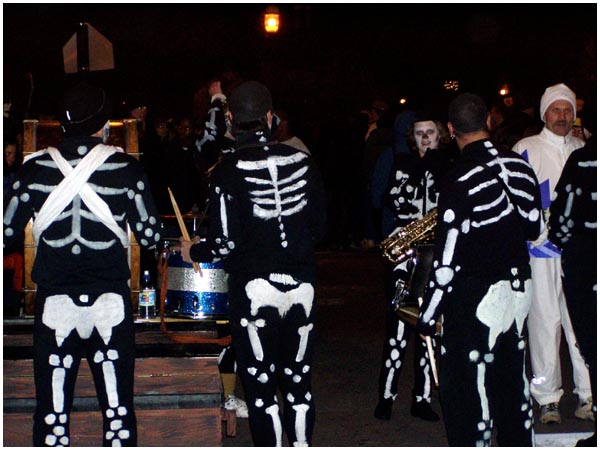 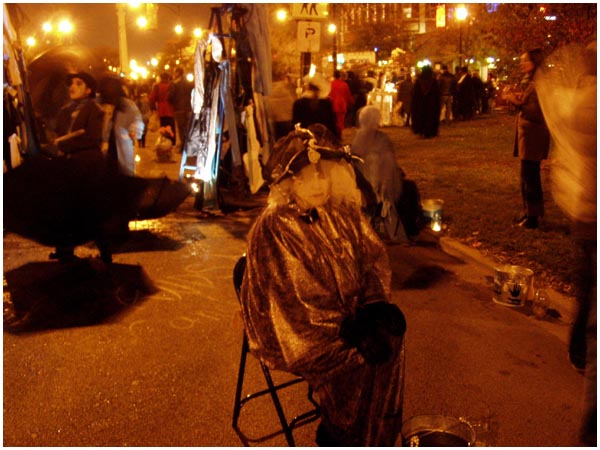 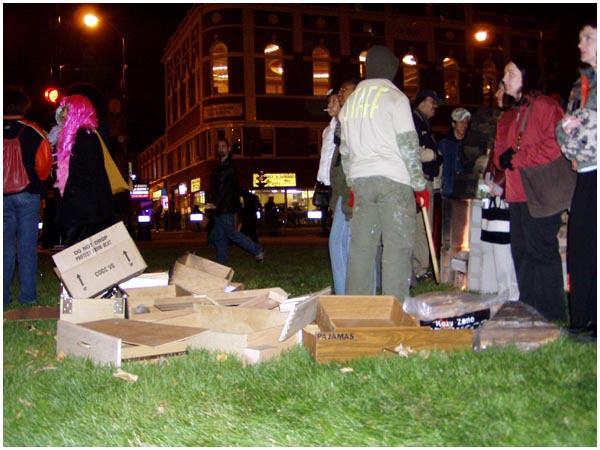 A few fires were started in barrels, to keep the crowd warm. Handy firewood around, too.