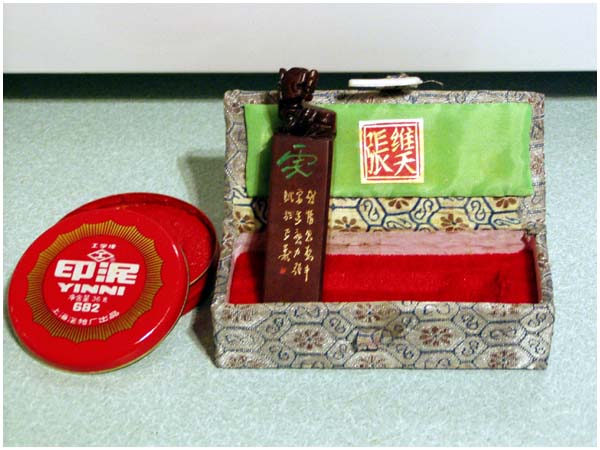 My dad showed me (and gave me) this the night I got home. While he and my mother were in San Fransisco, they got me a "chop." Technically, it’s a signature piece. In olden times, a "chop" was used to sign a document – sort of like a stamp, a way to show that a particular person had read a letter, etc. The tin on the left is a bit of red ink. The wooden chop itself has, at its top, a tiny Tiger.

The Chinese word (painted in green) is "Tiger." This is particularly lucky for me, since I was born in 1974, the year of the Tiger.

My name, in Chinese, is what appears in red ink on the inside cover. 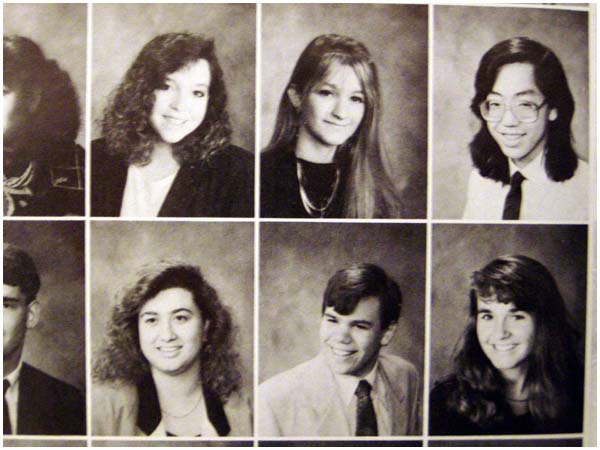 Here’s me in high school. Yeah. Those were my real glasses. 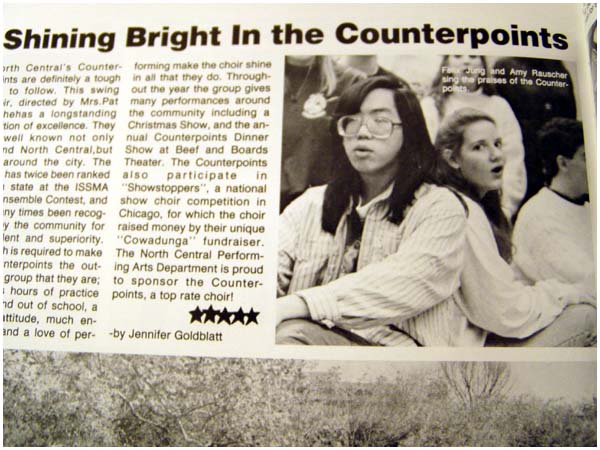 Here’s one of me, during choir practice. That’s right… not only was I in choir. I was in show choir. 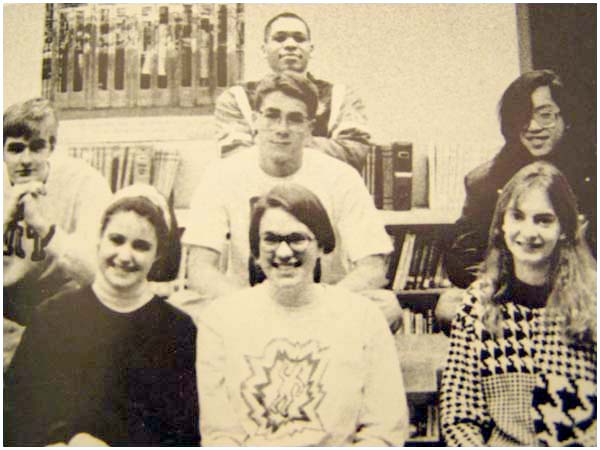 I was on the Academic Decathlon team too, but I had no business there. I swear to Christ, I was the weakest link… I did no studying, no work. It was terrible. I wanted to hang with the nerds (and how nerdy is that), but outside of speech… I was useless in competitions.

I had a big crush on Audra (front row, center), but I was too young and too stupid to recognize it at the time. 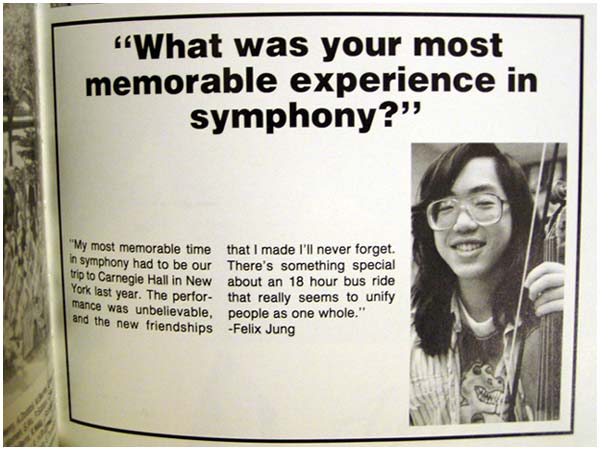 I was also in Orchestra. To be fair, I was involved in Orchestras since I was in middle school. I first started violin lessons in third grade, and was pretty good compared to most. Mainly though, it was due to the fact that I started fairly young.

Compared to some of the strong musicians I encountered, I never really had a love, a genuine passion for the violin. Some guys I knew would practice six, seven hours a day. Me? I played enough to get by. I was good because I trained early, but I didn’t really, truly love playing the violin.

When I was a Sophomore in High School, our orchestra went on tour with two other private schools. It was a big deal, since we were the only "public" school. All three of our orchestras performed in Carnegia Hall… so I’ve tecnnically played on stage there. That was my first exposure to New York, and I held hands for the first time with a girl while riding the Staten Island Ferry.

Two years later, as a Senior, I was the concert master for our orchestra.

Sad to say, I break out the violin on rare occasions. Typically, it’s on a warm Saturday when I feel like playing a bit. Most times, I’m either jittery with caffeine or full with booze. I learned on the Suzuki method, so almost all the songs I know… are memorized. 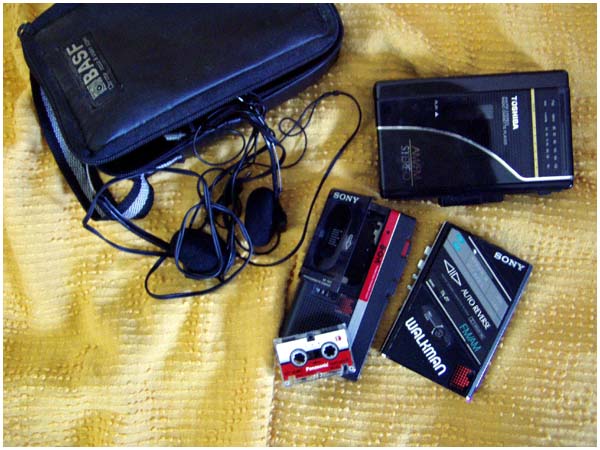 At home, I found a small bag with all my old Walkmans. I even found an old mini-casette recorder. I brought the tapes back with me and, unfortunately, there was nothing worthwhile on them at all. 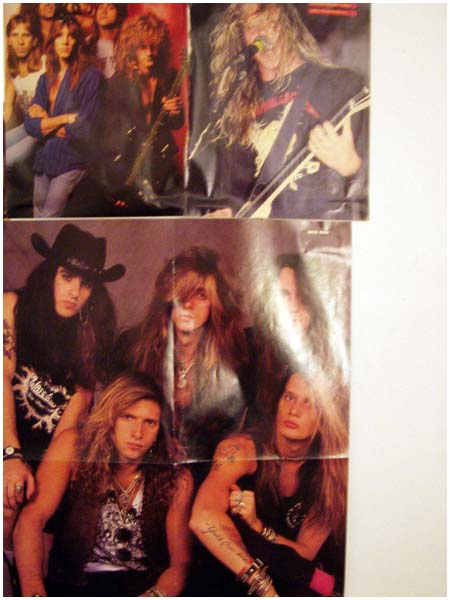 Aaaand… we move into the heavy metal. My parents have converted my old bedroom into their office space. But they’ve elected to leave a few posters and pictures taped onto the walls.

Back when I was in high school, I was into heavy metal. Behold my old posters! 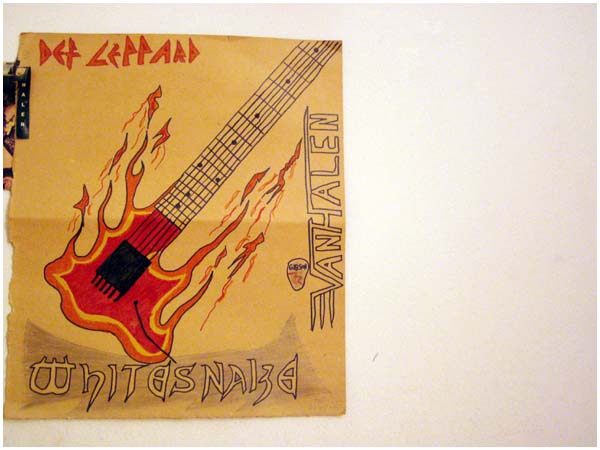 Here would be the folder I drew in Art Class, seventh grade. That’s right. Bow before my skillz! 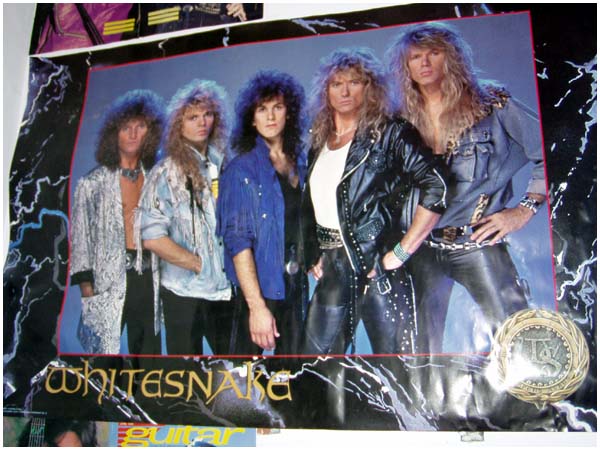 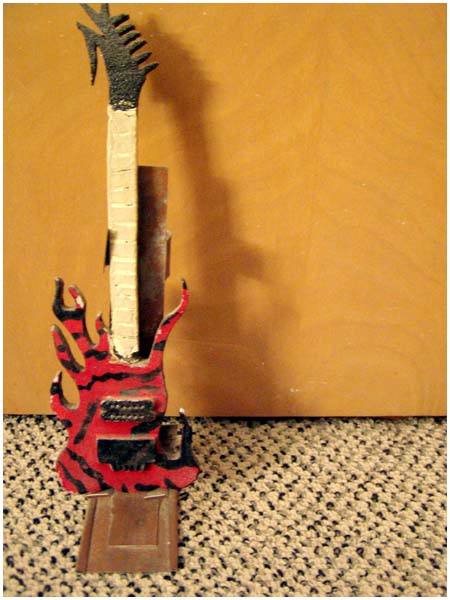 Alright. Tease me about the heavy metal, about the big hair, about the wussy fucking music.

But I DEMAND RESPECT for the Steve Vai Flame Guitar model that I made in seventh grade shop class.

I carved this fucker out of styrofoam, delicately, with a bandsaw. Then, I packed the mold into dirt, poured liquid metal into the space and cut off all the extra rods. The whole thing is made from one carefully crafted piece of solid metal.