Driving out to New Concord, OH. Heading to Jim and Meghan’s for a party, where a lot of old MFA folks are going to be drinking and hanging out. Technically, this shot was taken on my way back home to Chicago… but it gives you a good sense of the openness and green. I’ve been in the city too long; I keep forgetting about trees, and how wonderful they are.

On the way there… I missed their street. I turned around in the nearby cemetary. Eep.

I’m in love with their house. Spacious and welcoming and right near the college where they work. You could literally get on a skateboard and (without even pushing off) glide down the hill to the college. I could huck a rock from their porch and get fairly close to the campus buildings.

THIS made me fall in love with the place. :)

It’s one of the scariest, coolest bottle openers I’ve ever come across. 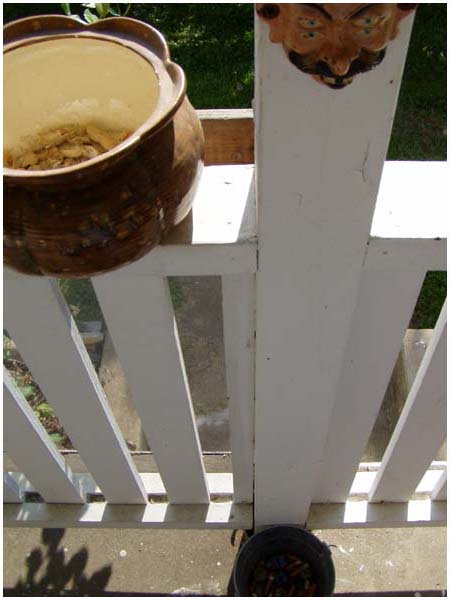 Complete with its own catch-bucket!
For most of the early part of the party, I didn’t take many pictures. I tried not to bring the camera out too much (at least at first). There were a bunch of folks, from OSU as well as some faculty at Muskingum. I met several professors in various disciplines, and the cool thing about a small college like Muskingum is that folks talk cross-discipline more. I really dug the folks I met, and everyone was really, super nice.

What can I say? We’re a bunch of writers. We do this shit right.

Matt wound up setting the tone for the evening. He suggested Boilermakers, and so that’s what he and I ended up drinking for most of the night. A Boilermaker is just a shot, dumped into a glass of beer (shot glass and all).

Even their doors are cool.

Matt with Wesley, Jacki’s dog. If I recall correctly, Matt’s exact words were "like a little pony."

When Matt gets the camera, he tends to shoot only one kind of picture.

Akhim and Jesseca. Akhim went out in a blaze of glory, and was done for by, like 10:30 PM. He flamed out early and hard, like the pros do.

Jim getting into the rhubarb. A bunch of us all had a nibble.

Bottle of Beam with a Felix on the end of it.

This was a neighborhood dog. It had been hanging around the party (outside) for several hours. For the longest time, I thought it belonged to one of the other visitors… but discovered no one knew where the dog came from.

We ended up calling him "Harvey," since that was easier to remember than "That damn dog." Definitely a determined dog, who kept finding his own way into the house. :)

I should probably add that, while in Columbus, Jim and Meghan held a party where we all participated in realizing a wistful fancy of Jim’s. We ordered a large pizza from Papa John’s, dipped each piece in some batter, and deep fried it.

And you know what? It was really, really good.

Oh come on! That was a good one!

We all called up Wade, who’s in law school in Georgia. Passed the phone around and said our hellos. Nothing says love like a bunch of drunken friends slurring "heyhowzitgoin?"

This photo was in Jim’s office. Taken on the night when they called me, drunk.

Meghan, throwing down the Smirnoff Ice.

My crotch. Thanks Matt.

In the garage. Not sure where the hats came from. Here’s one of Jim, trying to look uber serious.

Dan, examining a quick painting Jim made with a butane torch.

The garage is incredibly huge, and I’d wager to say it’s close to the size of my apartment. Great space, with an additional back room that overlooks the campus. There was a basement, but I never saw it.

Oh yeah, the neighbors loved us.

At Jesseca’s request, I had an Oreo bathed in Onion dip. I was drunk, but not drunk enough to where this tasted as good as she claimed.

Nothing is better than burgers when you’re drunk. Except maybe hamburgers made after midnight!

See? Everyone’s happy. Even the burger.

I noticed this rather cool looking key near the kitchen.

And an even cooler inscription.

Meghan, near the start of our half-hearted attempt at Quarters. A few of us tried to play, but it fell apart pretty quickly.

A picture of Akhim, from the Columbus Dispatch.

Now let me think… is this Cowboy? Or is it Chet? I think this is Chet.

Edit: Oops. This is cowboy. Thanks Juliet. :)

I slept in Meghan’s office, and stumbled across this line written on an open notebook. I’m hoping she doesn’t mind me posting this image. I dug the line a lot, as I’m sure she did since… well, she wrote it down.

Have I mentioned that both Meghan and Jim are awesome writers? Expect to hear about their books in the future.

A shot of the porch, in daylight. That’s the college, over the trees there.

Jim made some Cinnamon buns for all of us hung-over folks hanging out in his living room.