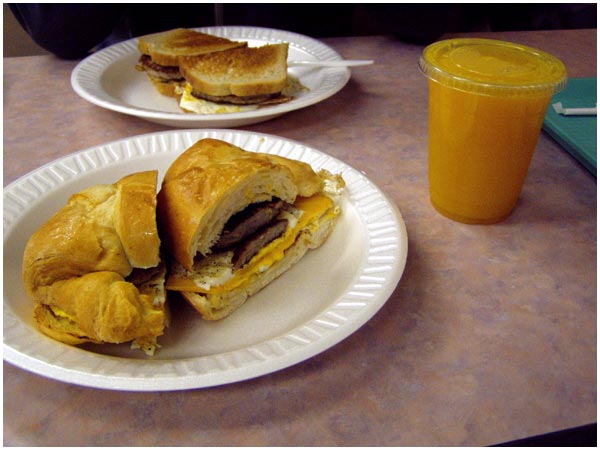 Near the Blue Line stop, there’s this Chinese restaurant called "Silk Road." I’ve eaten there maybe once for lunch, with Justin. But it seems like they started serving breakfast stuff within the past few years – mainly to folks on their way to work and nearby construction workers.

I had an egg and sausage and cheese sandwich, on a croissant. And a glass of fresh-squeezed orange juice. It’s sort of weird to ordert this inside a Chinese restaurant (the interior looks like a cafeteria anyway), but one bit and the whole discrepancy thing ceases to matter. I’ve had their sandwiches here before and, if I could, I’d eat there every morning. 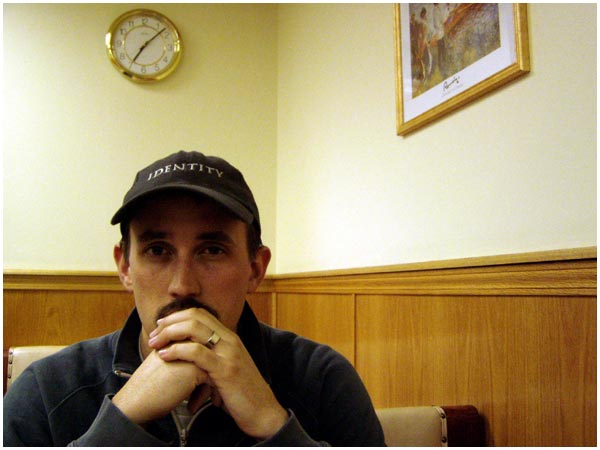 Ben, contemplating the morning. I grabbed this shot because I noticed the clock on the wall behind him.

Ben was on his way home, but he was going to shower, change clothes, and head back to work for the rest of today. Me, I was off home to sleep and to take a rest after the past few days. Unfortunately, Ben had more work to get done and was going to continue on without sleep.

What is it about us, that we do these things? Some days I don’t know if we secretly procrastinate, if it’s the insensitive schedules, or if it’s just part and parcel of the industry. I’d like to think of us as professional, in our own messy hair, blue jeans sort of way. Somewhere in our pasts, someone instilled in us a serious respect for the deadline. Maybe that’s what it is.