Pics From The Evening 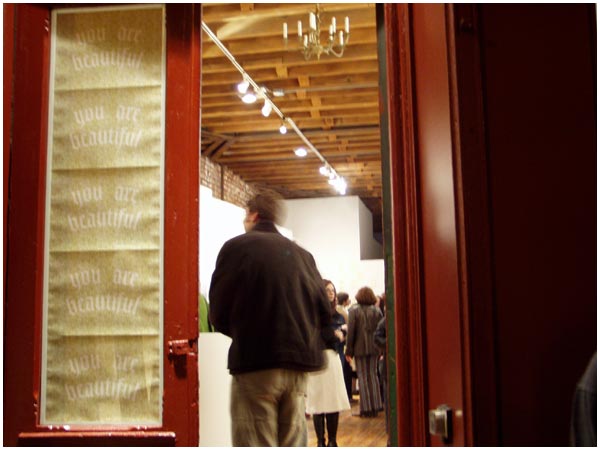 Fuzzy shot of the front door. Ten bucks at the door (donation), and in return I got myself some stickers and a few posters. Well worth it, in my book. I was excited to see what was going on, but the moment I walked inside and looked around… I had this sort of deer-in-the-headlights moment. "Oh crap," I thought. "I don’t know anyone here."

I proceeded to just stumble around, and stared at things for a bit. It was a small space, but a good number of folks talking in clusters. Everyone was lost in their own conversations, and surprisingly… I felt remarkably fine. I wasn’t self-aware or insecure or socially awkward or any of those number of things that I tend to get when in groups (or in public).

I wandered a bit, and after I got comfortable… I broke out the camera. 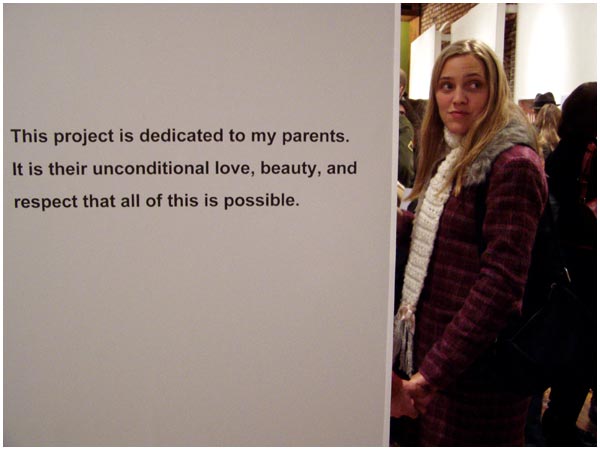 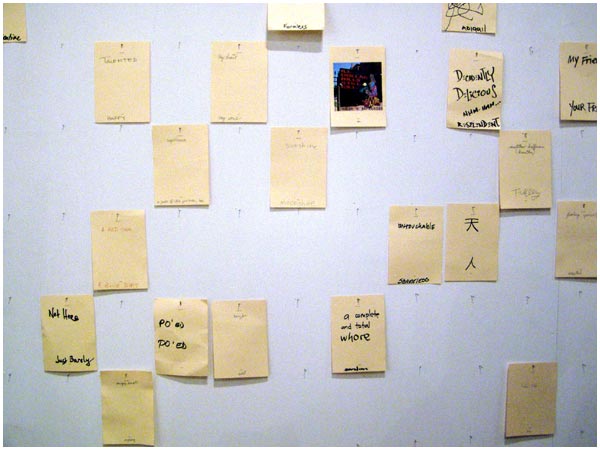 At the door, I was handed a card. I was given the option to participate, if I was so inclined. On the card, there was some text at the top that read "you are" and text at the bottom that read "i am".

Everyone that filled out the card placed it on the wall in back, where there were a series of nails set up. The goal here is to gather all the cards, and eventually make a book.

I totally dig this idea, and can’t wait to see a gathered form. User-generated content. I’ve gone on and on with friends about how I adore the e-bay model, where your audience is primarily responsible for creating content for you… and this experiment follows a similar vein. I love seeing this kind of diversity, and to see how each person has decided to express their own thoughts.

Fuck – this is the reason I love formal poems. Sonnets, for fuck’s sake. You’re given parameters, boundaries, and you work within them. The fascinating thing then becomes how each person then works within those rules (or tries to subvert them). 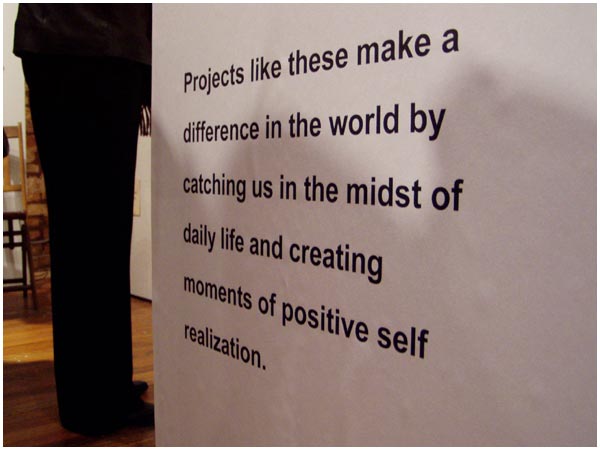 This pretty much encapsulates how I felt, when I came across the first sticker I ever saw.

God damn. I just realized… it’s been over a year. 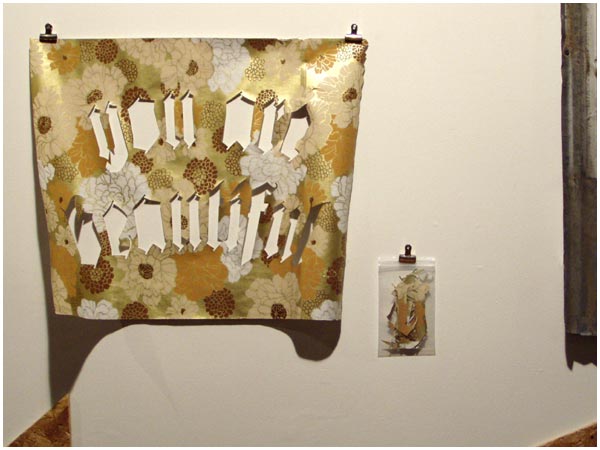 This is from a series of pieces that are going to be released to the public soon. I wasn’t too clear on this, and pieced things together a bit when I talked to other folks later on in the evening.

Turns out, one of the major projects is to get "You Are Beautiful" signs on the CTA, and to have them on display inside the subway cars. 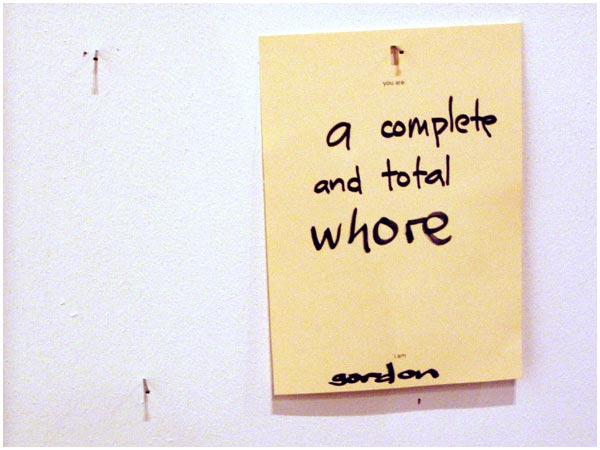 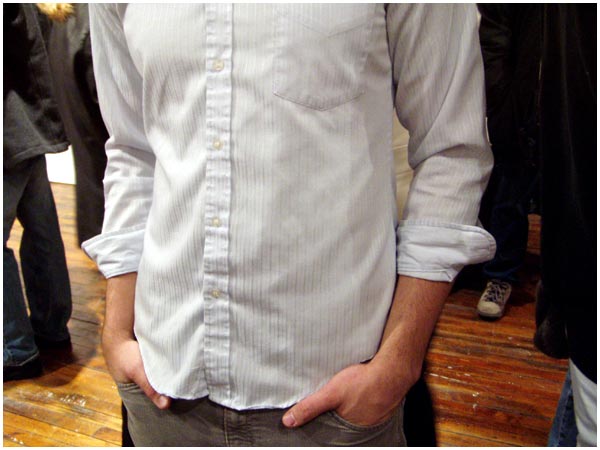 One of the many folks involved in the project. 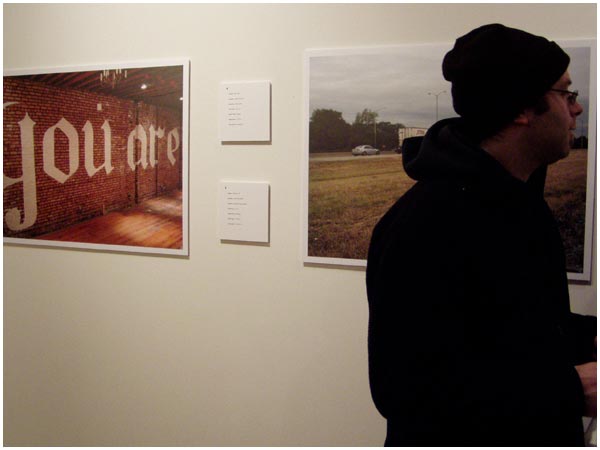 Snapshots of other works. 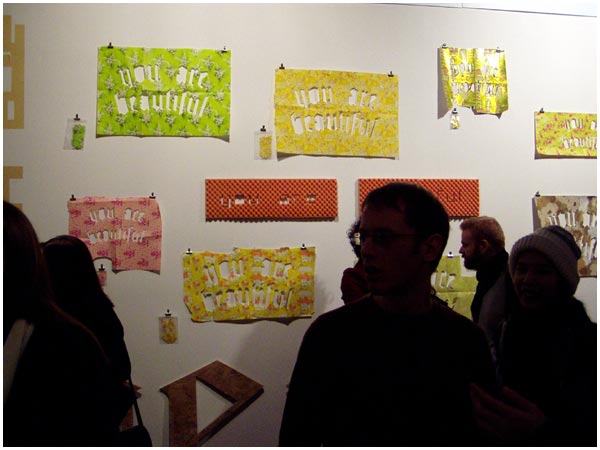 A wider view of the papers. 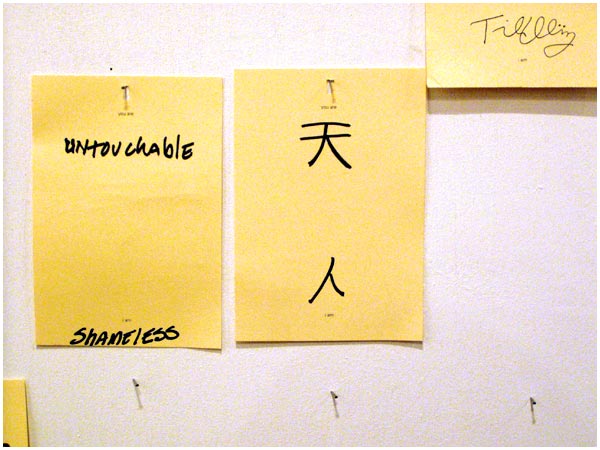 You are | I am. The squiggles are mine. My Chinese is pretty damn limited, but I thought it would be playful to respond in another language. The top word is Tien, which means sky/heaven; the bottom word is run, which means person/human.

Cool tidbit: later on in the evening, I saw a couple pick up my card and examine it. The girl (Asian) seemed to be explaining to her boyfriend what the characters were. That felt really cool to watch, from a distance. 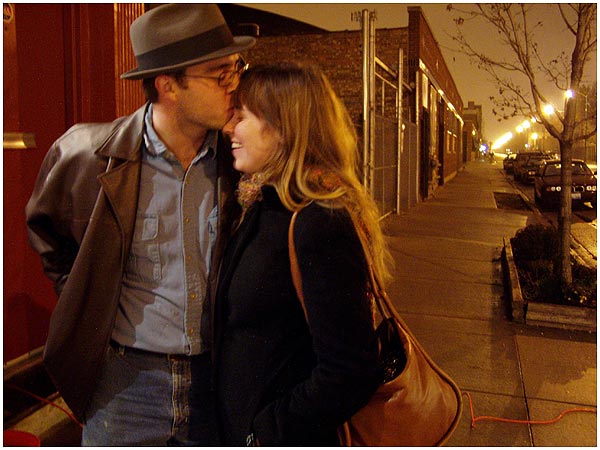 Who would have thought? Luck of luck, I look over and see Rob and Gretchen.

Turns out, Rob works with some of the event organizes, and has helped out before on this project. I had no fucking idea! Gretchen was helping out yesterday as well, and the two of them were assisted in putting up a few walls inside (possibly the one where all the cards were hanging).

This was such a wonderful, random encounter. And Gretchen was quick to point out how I entered this world as an ideal candidate… someone who found the stickers, and slowly uncovered things bit by bit.

I had a nice talk with Gretchen about work, about computers, and about what constitutes "pure" art.

Ahhh damn. What a lucky encounter. I’m still getting over the fact that we all met up here! 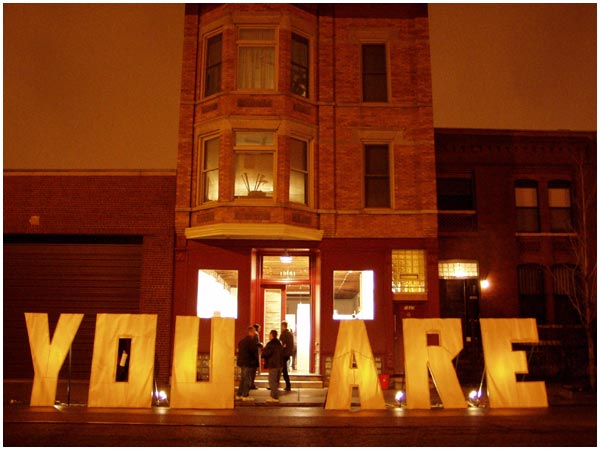 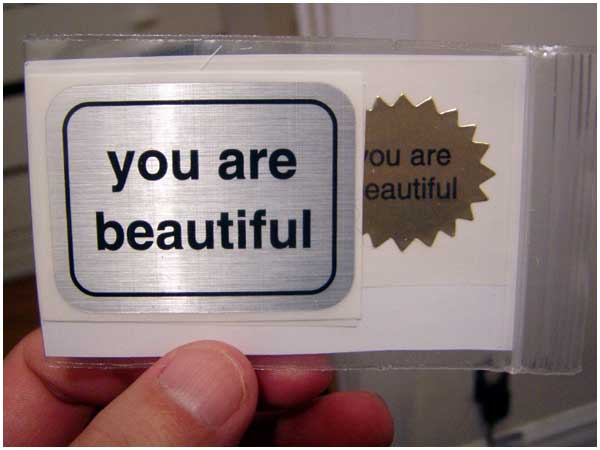 I took a cab over, originally. And so when I left, I hoofed my way over to Ashland. I was a bit spooked, since it was a fairly industrial sort of area we were in, and I had a vague sense of where I was.

I hung out on the corner of Ashland and Fulton for about 20 minutes, looking for cabs. I saw a few as I approached the intersection, but once I got there… nothing.

After a while, I decided to just walk North and made my way up to Kinzie. A busier intersection, I found a cab within minutes and was speeding along homeward.

Here are the stickers I got with my donation. I can’t wait to start spreading them around.

« You Are Beautiful: Current Works and Proposed Projects
God Damn »