Dustin and Sherie: Wedding in Belgium 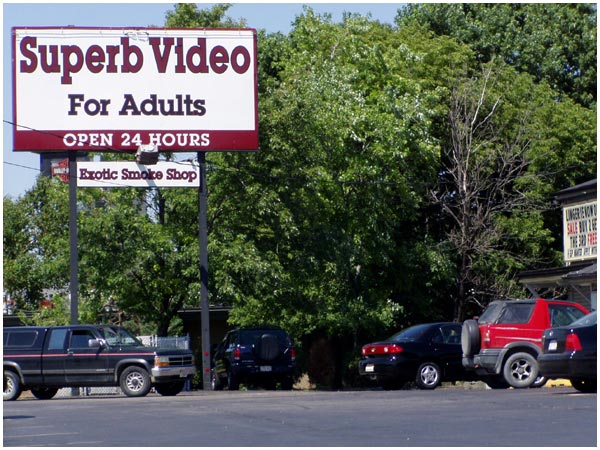 In our talking, I found out that if Melissa allows anyone under 18 to enter the premises… she, personally, could face up to ten years in jail and a $10,000 fine. Apparently, all the staff have these Pavlovian ears (as she termed it) and listen for the door chime each time it goes off. Every time the door opened, everyone’s head snapped.

Before I could ask her, really, how often did underage kids try to sneak in… a woman walks in with (I swear to Christ) her fucking baby. Melissa immediately tells this woman she can’t come in with the kid, and the woman walks a few more steps before stopping, seemingly in disbelief. “What’s he going to see?” the lady asks, but Melissa is already pointing and telling her she has to leave. Now.

For those who may be interested to see what Melissa’s up to, she’s got a blog going, complete with lots of pics. Check it out. 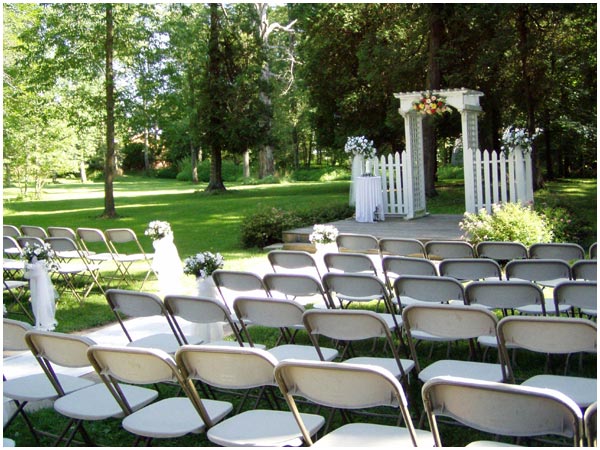 I guess there’s no real easy way to say this: I missed the wedding ceremony.

Yeah, I’m a big jerko. I thought I had left with plenty of time to spare, but no such luck.

I arrived about a half mile from the site (at the Lake Church Inn), and ran inside to get my room. What I didn’t know was that Mitch (who I was splitting the room with) had already shown up and gotten the key. I stood waiting for what was forever, as the staff went back and forth, trying to figure out why they couldn’t find me a key (or a vacant room).

Eventually, I told them I’d meet up with my friends and work it out, and could I please use their bathroom? I ran to my car, grabbed my clothes and did the quick Superman routine in their Men’s room. Jotted out to the site, parked, walked into the building only to run into the groosmen, who told me I should go around the side. After doing so, I found the above pic, and realized I had missed the ceremony.

I did, however, manage to blend into the crowd and went down the receiving line, shaking everyone’s hands. Dustin and Sherie were happy to see me, despite my having missed the big show.

I tried asking them for a “re-do,” but they both sort of looked at me funny. 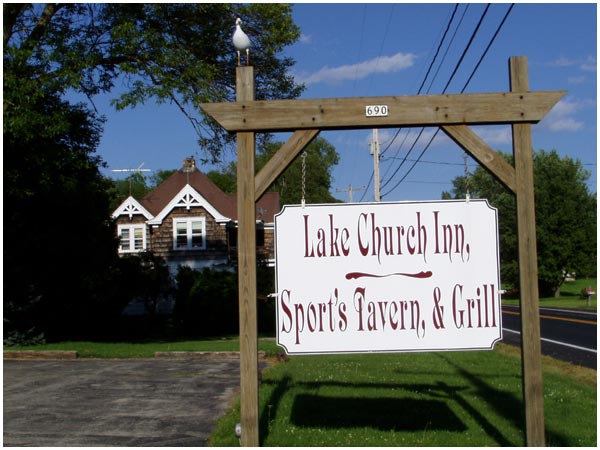 Mitch (shuteye) and I swung back to the motel, so we could pick up his card. I also had a few last-minute adjustments to make for my gift.

What was interesting about our motel is that it was a bit like a Swiss Army Knife: Motel. Bar. Restaurant. Arcade. And how thankful we were, as we would later find out. 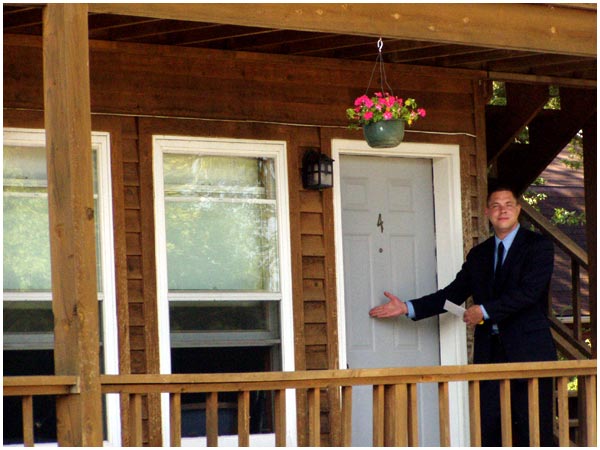 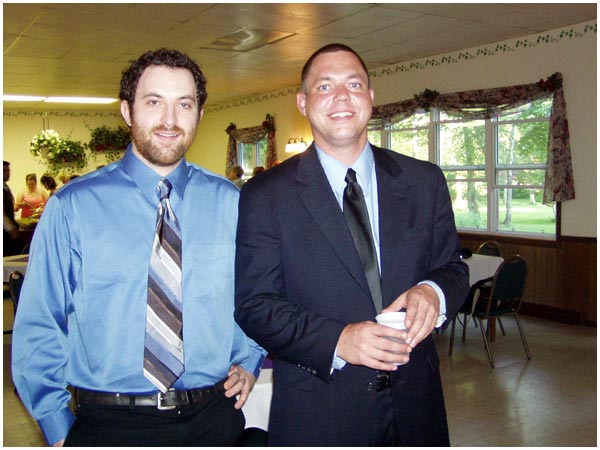 Back at the reception. Left to right, it’s Jeremy (wyndom/jeremy) and Mitch (shuteye). We’re about to step up to the bar and grab a few beers. 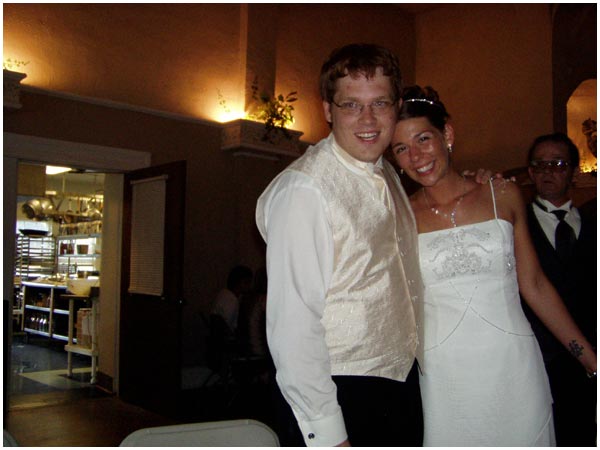 After dinner, chatting at our table. Dustin and Sherie stop by to say hello and pose for a quick pic. 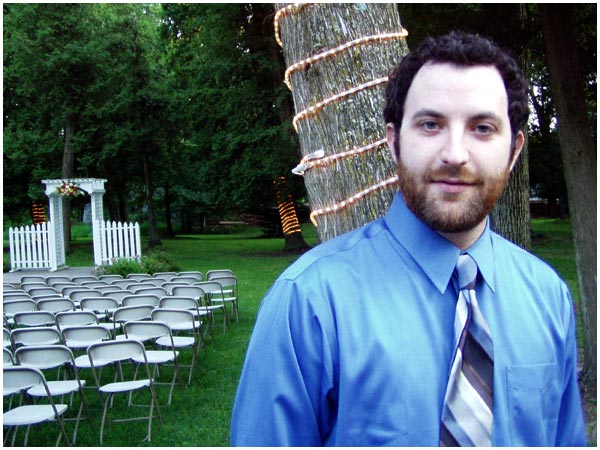 Jeremy (wyndom/jeremy) (his fiance Kimberly was camera shy, and didn’t want to be photographed). 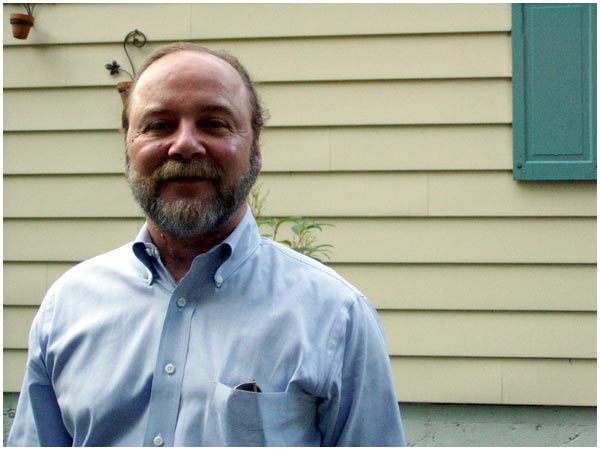 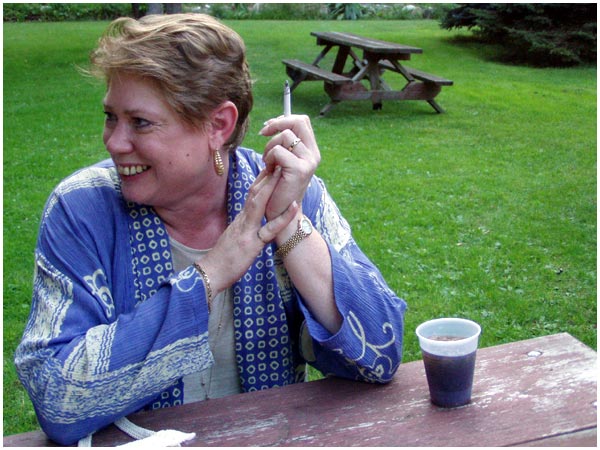 The above pics were taken outside, by where the ceremony took place. We hung out for a good while at a picnic table, sipping beers and just chatting. A few times, we got super nerdy (of course) and talked shop.

A funny joke we kept throwing out was that we kept referring to ourselves as Dustin’s “imaginary friends.” Because really, we all know how via the Internet. And that’s the way all of us know one another. A little odd, and a little cool, all at the same time.

Although we’ve only met on a few occasions, we all have this tremendous amount of shared history that we can relate to.

For me, I’ve talked with Dustin for almost three, four years now? And we’ve only ever met a handful of times. It’s kind of funny that I’m at his wedding when, in all reality, I’ve only met him about five times prior.

Let’s take a look, shall we?

Ah, good times. And this reminds me. I have some incriminating photos of Dustin humping various things (and people) from that housewarming party. More on that later.

All in all, I had a ton of fun just talking and catching up with everyone. After cake, we went inside to watch a few dances and excused ourselves soonafter. 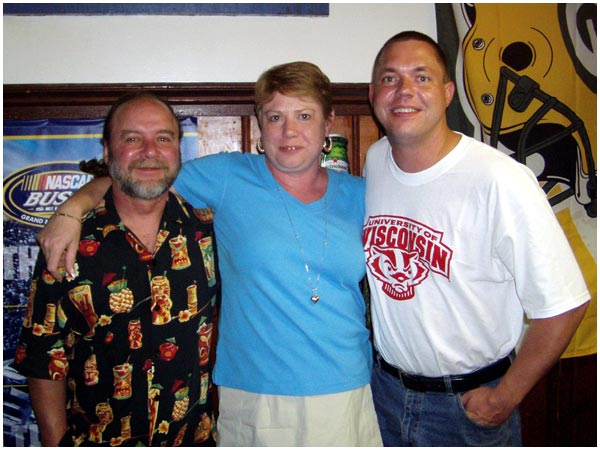 Here we are at Lake Church Inn. Er… the bar part of the Inn, anyways. We’re all changed into more comfortable garb, and split a few pitchers of MGD. Some great conversations with the Flamingos and Mitch… I found out a lot of stuff about everyone. High school was a big topic, and we swapped stories for a good part of the night.

If memory serves, Mitch (shuteye) used to have this routine with his buddies where they’d all meet up outside of school, walk in an ordered line into the school, go into the bathroom and chant/sing in unison. Apparently, they did this to freak the teachers out something fierce, and it worked like gangbusters.

Michele (Ms. F) plotted with a friend of hers in High School and, between the two of them, they were either the President (or Vice President) of every single extra-curricular activity
in the entire school. The two of them also stuffed ballot boxes, and helped successfully crown the first black Prom Queen in the school’s history.

Jeff (Flamingo Jeff) fought a lot as a kid, and ended up getting cornered by a bunch of guys in a locker room one day. He reached into a locker and grabbed something (a boot maybe?) and hucked it at one of the kids (causing the kid to lose sight in that eye for a few months).

I had a blast talking with everyone. From an outsider’s view, I can’t help but think how strange we must look. What an odd group of individuals to gather together, sharing drinks and conversation.

I really dig it. 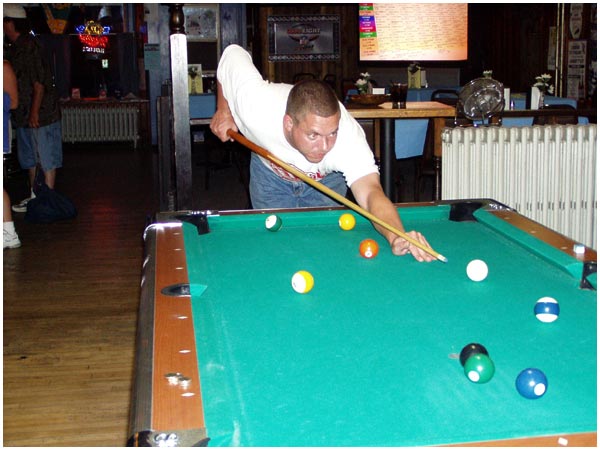 A bit later on, Michele (Ms. F) bid is a good night, and excused herself. We boys ended up migrating over to the pool table. Mitch (shuteye) and I grabbed a few games with two local guys, and held our own pretty well.

All in all, they were pretty in the bag, so it wasn’t a straight-up game. I got cocky though, at one point, and after a strong run with only two balls left on the table… I sank both and lined up to sink the 8-ball. I did a behind-the-back move (which I had talked about earlier in the night, about how my grandfather taught me this move) but ended up totally whiffing and fucking it up. 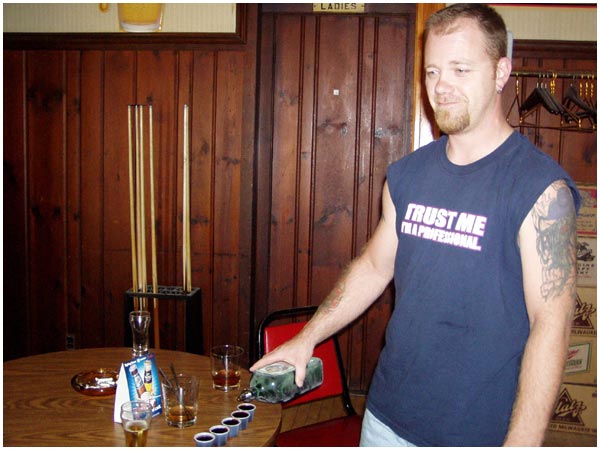 Here’s a shot of the bartender, pouring us some Jaeger shots. 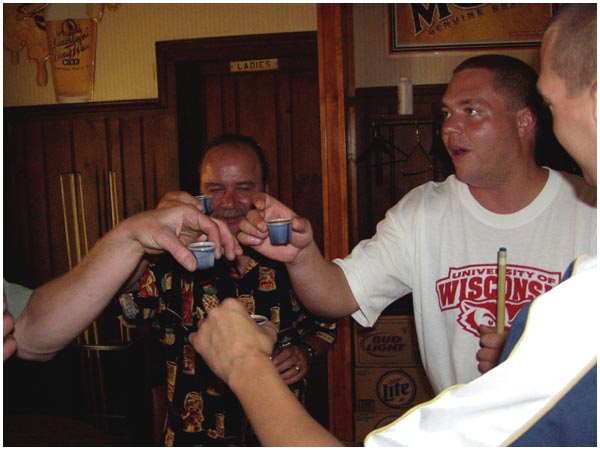 The shots were courtesy of our opponents (John and Mike, I think?). They were good sports, and overall really nice. However, at some later point, one of them got pretty pissed and snapped his pool cue in half after missing a shot. I don’t think it was direct animosity towards us (althought it might have been).

He ended up having the bartender come out and take his credit card, charging him for the cost of the cue. We played a bit more but, again… after missing another shot, he slapped his cue against the table pretty hard. The bartender yelled out “That’s it!” and kicked him out. 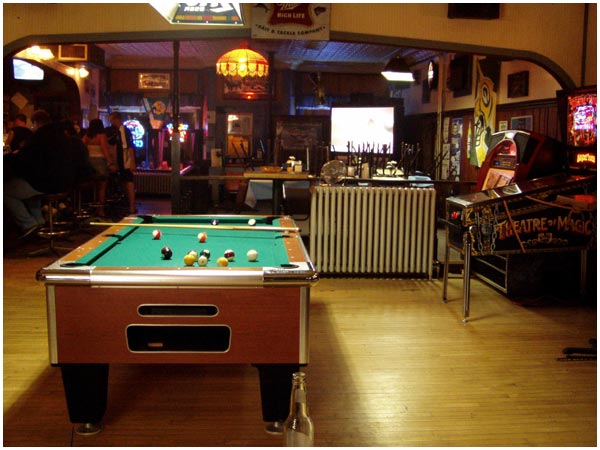 Here’s where we left the game. No one else really shot pool the rest of the night.

For the record, Mitch (shuteye) and I kick ass. 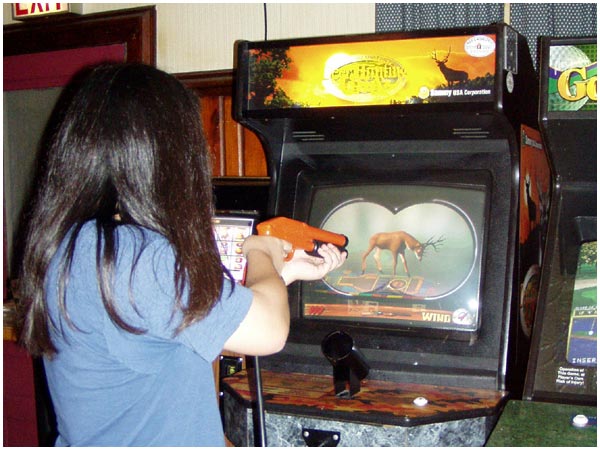 And here’s me, experiencing the full arcade joy that is Deer Hunter, U.S.A.. 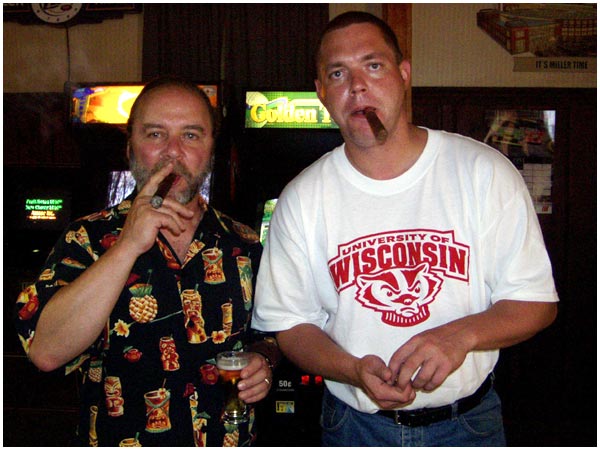 Jeff (Flamingo Jeff) breaks out the cigars and poses with Mitch (shuteye). 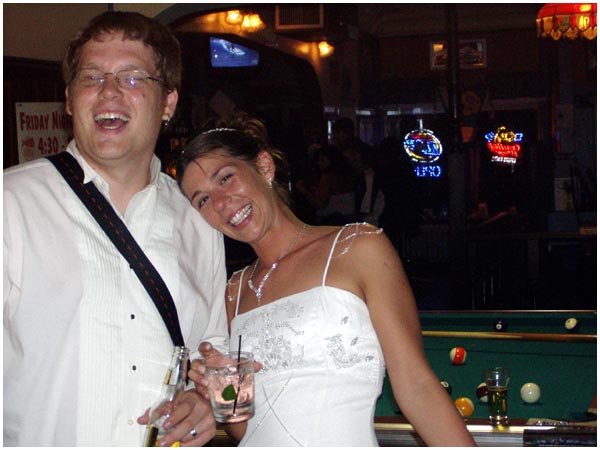 SURPRISE! Dustin and Sherie waltz into the bar and hang out with us a while. After the reception ended, they went from place to place, saying hi to everyone. How awesome is that? 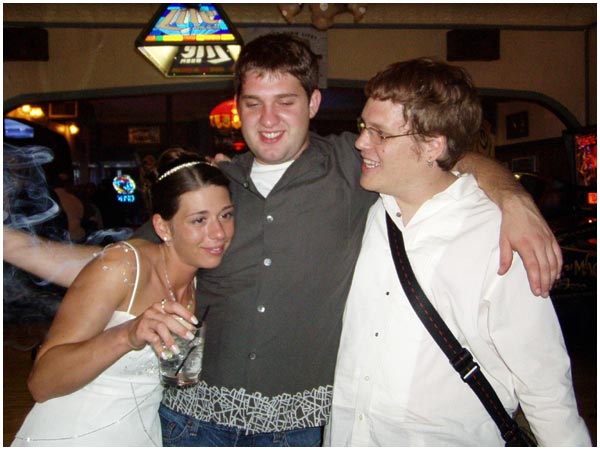 Sherie, Rick (who I met at that housewarming party), and Dustin. 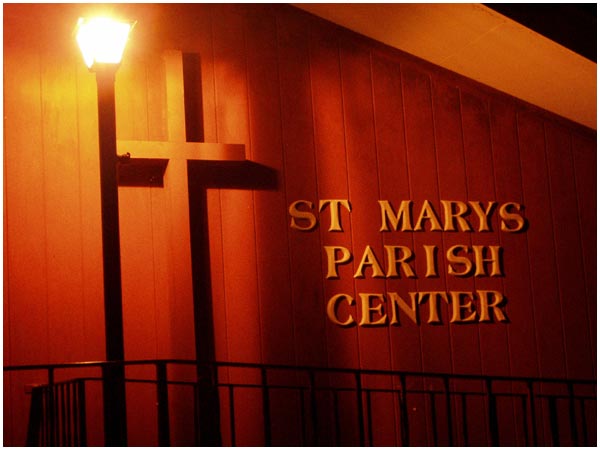 After the bride and groom left, our party ended up dispersing as well. Mitch and I said goodnight to Jeff, and we headed towards our room.

However… drunk boys that we were, we got distracted. Hanging outside our room, we were working on our cigars and talked a bit about the church that was nearby. Our discussions drifted to the places we had broken into before, and next thing you know… we’re walking across the street. 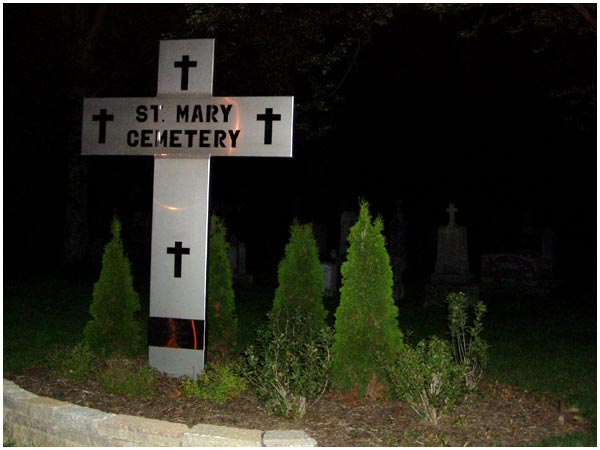 Did I mention there was a graveyard nearby? Walking through here was a bit spooky. 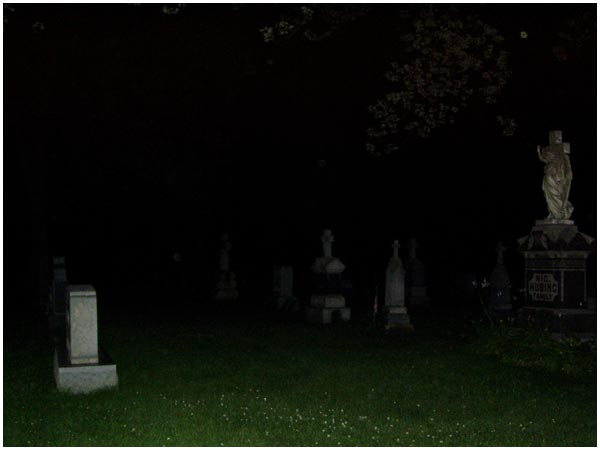 The whole place here was pitch black. Not even a streetlamp to guide the way. 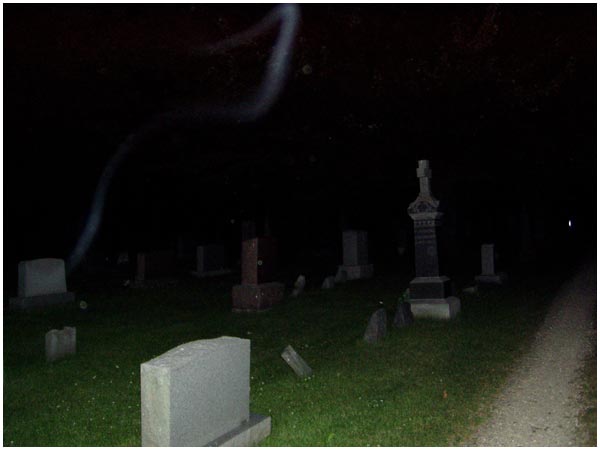 After we got back to the room, we were going through pictures and this one kind of freaked me out. I had no idea what this thing was, and there was nothing nearby that could have caused this shape. The two of us were a bit spooked.

We threw on the tube, and found some station that was playing Stallone’s Cobra. I then recounted this story of how, when I was a younger nerd, attending some summer nerd program for nerds… our classes were right across the street from the Indiana State Fairgrounds. There, they had one of the early Hook’s Drugstores, which was a big local Indianapolis chain. The whole store was modeled after (or was) the original, complete with things like a nickelodeon and penny candy jars. Me and my friends ended up buying some pure cinnamon extract, and dipping matches into that.

The movie was as terrible as I remembered. We let the TV go, and I fell asleep to the sound of gunfire and crappy action dialogue.

« Quiet Day
Graveyard: The Next Morning »