I did this costume once before, when I was living in Columbus. But that was before the blog, and before Chicago. I’mgiving this costume another go, and took some pics this time around.

If you happen to be in Chicago and see me – feel free to walk right up and try to get some candy. 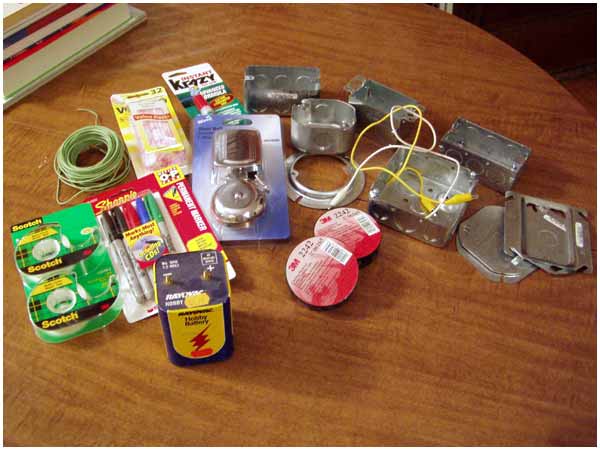 Basic supplies – this is what I started with. Wire, a battery, doorbell, Krazy glue, velcro, some markers, Scotch andelectrical tape. The metallic items are outlet covers, which I got from Home Depot. Really, any sort of metal will do;I just happened to like the box shape of these guys, and they make grabbing the candy a little harder. 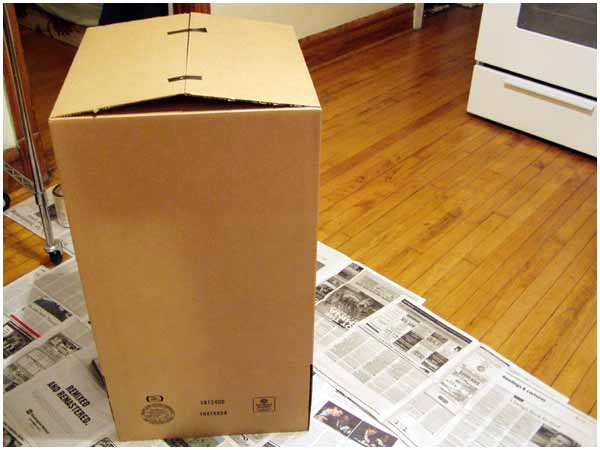 Generic box. I asked around for some spare boxes at stores, but ended up just buying one. This was pretty idealfor my build, and fit fairly snugly. Definitely try to avoid too bulky a box. Otherwise, it’ll be much harder tomove around. 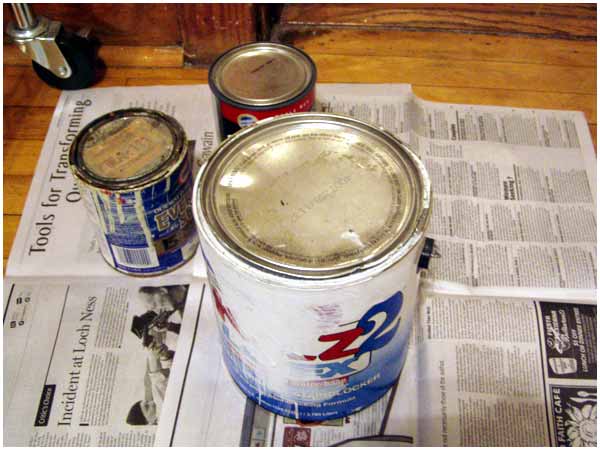 Paint that I got from Mike, a few days ago. One can of white,one can of red, and some primer. 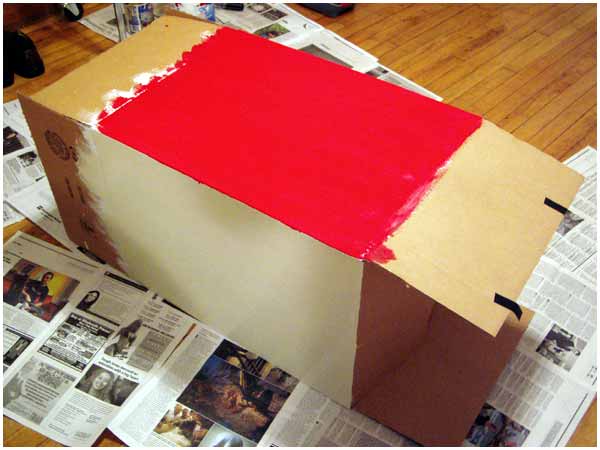 Initial painting. Eventually, you’ll want to fold in the flaps at one end (for the top), and just cut off the lowerones, so they don’t hit you in the legs. This was probably the lengthiest bit, as you had to wait around for thingsto dry. 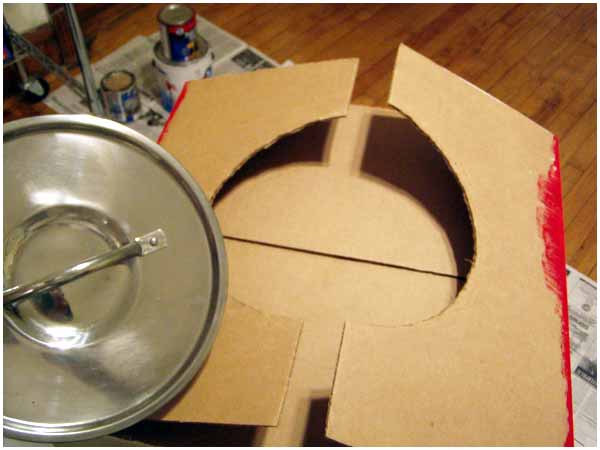 Opening up top. I approximated the hole by tracing a lid. Very, very scientific. 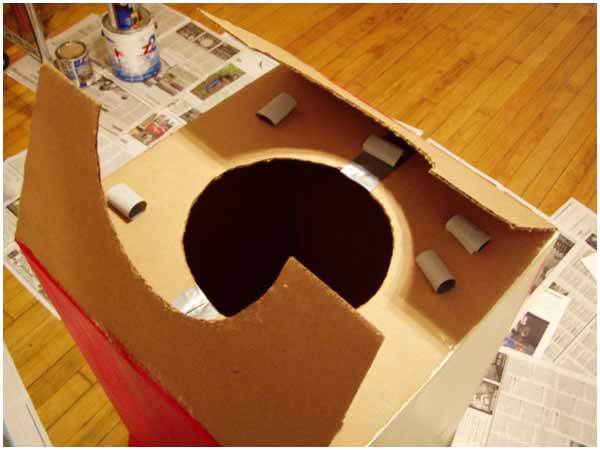 The top’s held in place by some staples and duct tape. 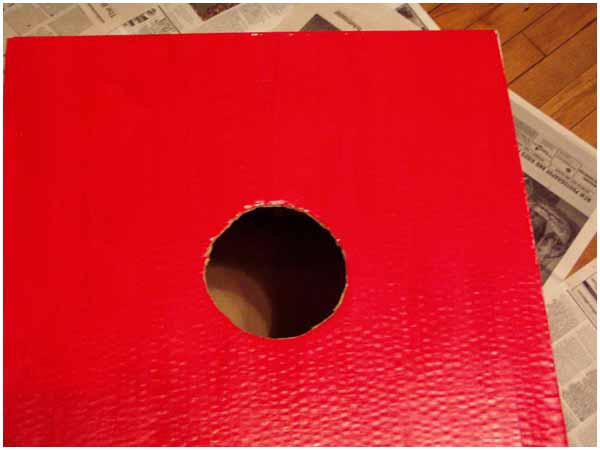 Hole in the side for the arms, which I got by tracing a CD. Yet again – very scientific. I approximated this and got pretty lucky as to placement. 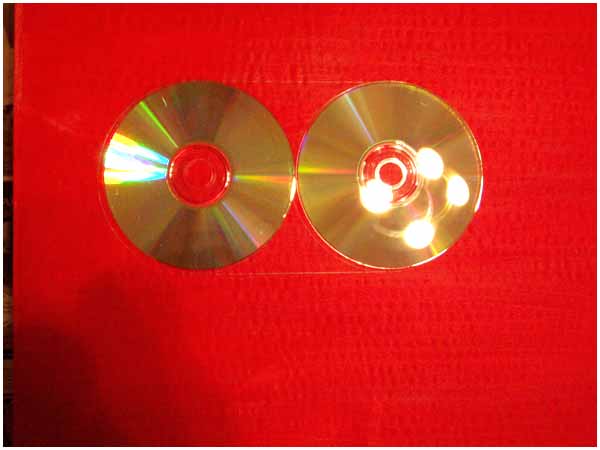 Although the size was way off, and I couldn’t really stick my arm through there. I ended up pairing two CD’s together,and that worked out better. 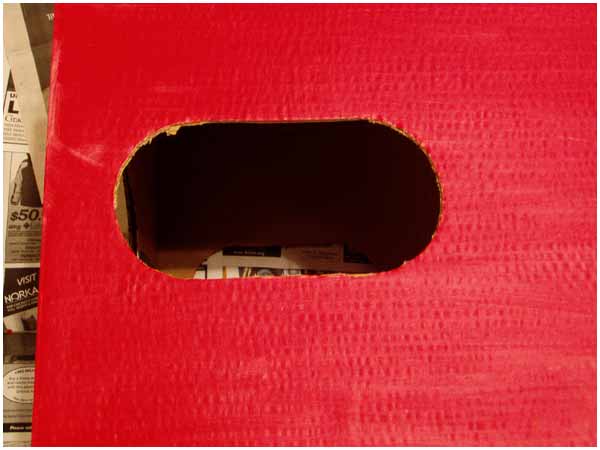 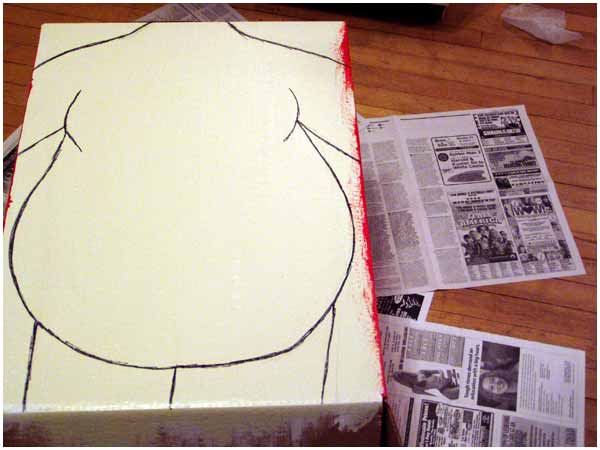 And the tracing. I sketched this out a few times, based on some images I found online. What’s great with the paintis that you can outline things in pencil and erase any mistakes. 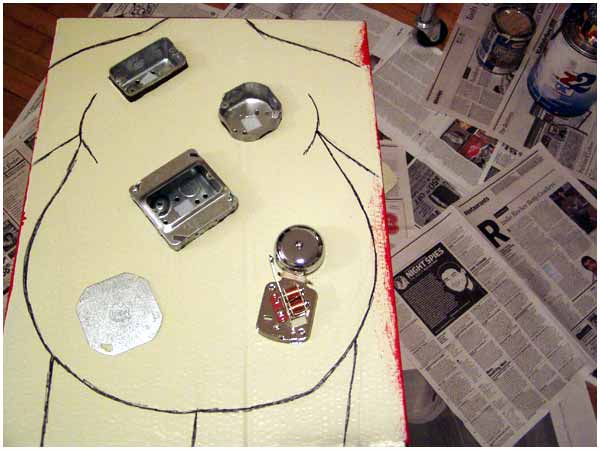 Placing the metal. In my first attempt, I ended up mounting the battery and the doorbell near the top, by my head. This time,I decided to embed the doorbell. Well, the other things will be embedded, but the doorbell’s fixed in place with some string.

I had a passing fancy to place the doorbell over my crotch. But decided against that. 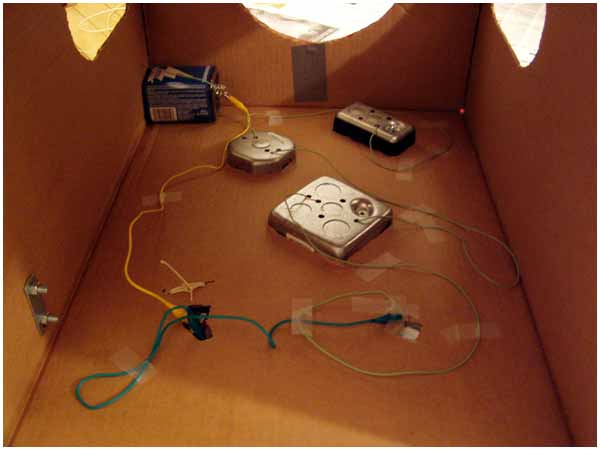 Interior view. I traced the metal outlet covers, and cut them a little short. Then, I basically just jammed the guysinto the space. For the one where I cut too much and made the opening too big… I wrapped the cover with some electricaltape to give it some more width. Almost all the metal is just wedged into the cardboard pretty snugly. The only thingI actually superglued in place was the flat metal plate (and the battery up there in the corner). 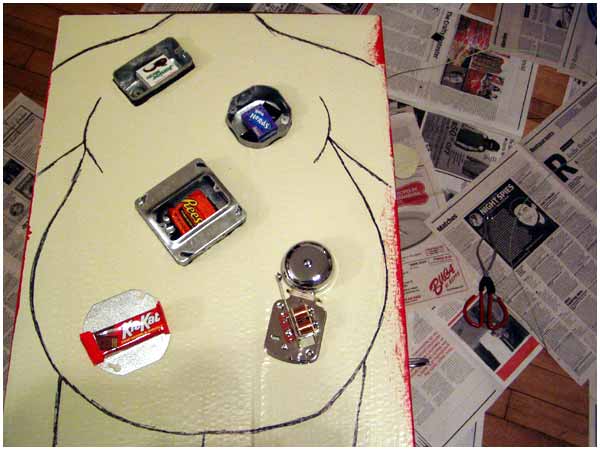 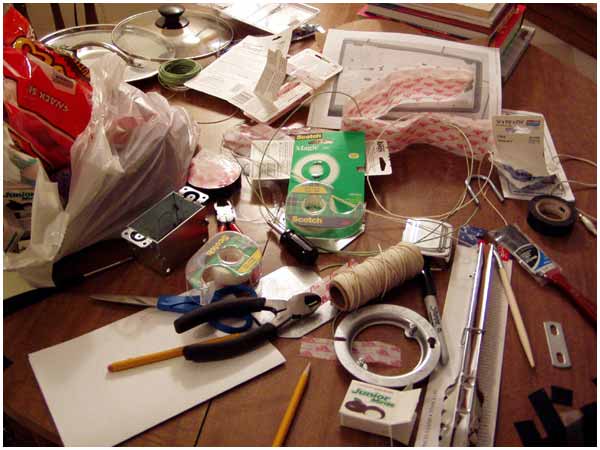 My kitchen is a wreck still. 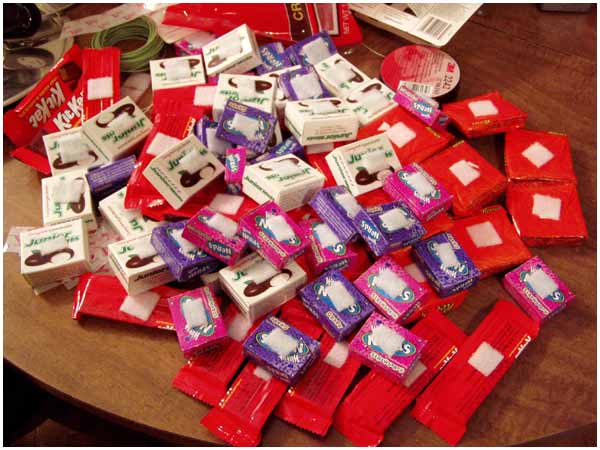 On the metal outlet covers, I placed a small bit of velcro (with the hooks). And this is the flip side – velcroon the backs of candy, to keep it in place. I’ve got a lot of extra, as I’m hopeful a lot of people will want tointeract with the costume. 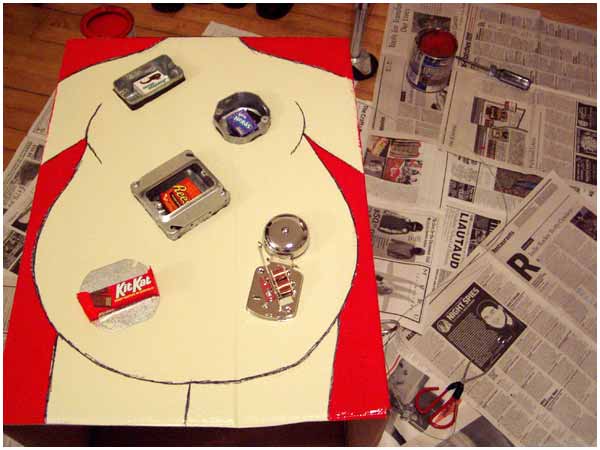 Final view, with an extra coat of paint. It’s hard to make out, but there’s a pair of salad tongs on the groundnext to the box, as well as a small metal ring I latched into the side. The tongs are wired up to the battery,as are the other pieces of metal, and the doorbell. If the tongs touch any metallic surface… it completes the circuit,and triggers the bell.

I don’t have audio on my camera, but I’m hoping to get some video later on in the day of this thing.