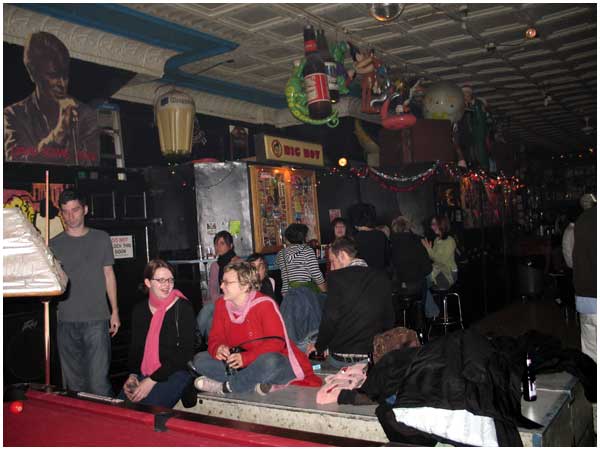 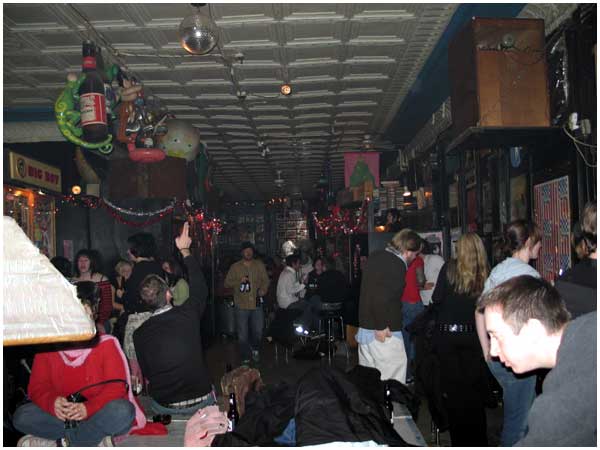 Fun time at Clubfoot. Justin and I geeked out and talked computers for a while. Then I threw some quarters down on the pool table, and we waited around for a game or two.

The two of us were admiring the DJ (and swooning just a little bit). One of the songs she played was Jim Caroll’s Friends Who Died, which I hadn’t heard in a really long time. At one point, when Justin left to get another round, I was overcome with this sad wave, and missed my friend Ann terribly.

I was staring around at the place. Everyone talking, people laughing. Drinks in hands. Music loud and thumping. There was a small disco ball going, and I just stared at the reflections spinning around and around, crossing over tables and chairs and the ground. On first pass, I don’t think she would like a place like Clubfoot. But I think that, given enough time and enough conversation, she’d be pretty comfortable here.

I really wanted her to be here, tonight. Whether she liked the place or not was immaterial. I wanted her here. In my mind she deserved to be here, holding a drink or sipping from a glass of water. She deserved it just as much as anyone else who was here did.

Her absence comes at odd times to me. I’ll go a long while without thinking about it, and then out of nowhere something small will trigger my memories, and I’ll be pushed off balance momentarily. A part of me knows that these feelings and moments will fade, as time goes on. But there’s a larger part of me that knows her death was unfair, premature, unnecessary… and no amount of time will change that.

A bit later on tonight, one of Justin’s friends (someone he’s met at Neo’s several times) stopped in, and chatted with us for a bit – I’ve forgotten her name though. Laura? Lori? She was very nice and very cool, and the two of us shot a game of pool later on.

My pool shooting tonight was total crap. I played like a drunk man because… well, I was drunk. During the first game, there was a group of folks next to me doing tequila shots. They had an extra (I guess), and so they pulled me in and gave it to me. A large part of this was due to the fact that I had on my Headbanger’s Ball t-shirt. So I guess tonight goes in the win column.

Seriously – I played like shit tonight. I don’t know what it is with me. With booze, I tend to either shoot pool like a freaking professional, or like a potzer. Terrible showing tonight.

Around 1:30 AM, I ended up excusing myself and abruptly leaving. I tend to do this, I think, when out and about drinking. I’ll reach some internal threshold, and decide it’s best for me to head home. A cab ride later I’m walking into my apartment, shaking off the snow and happy I wasn’t a hermit for once.