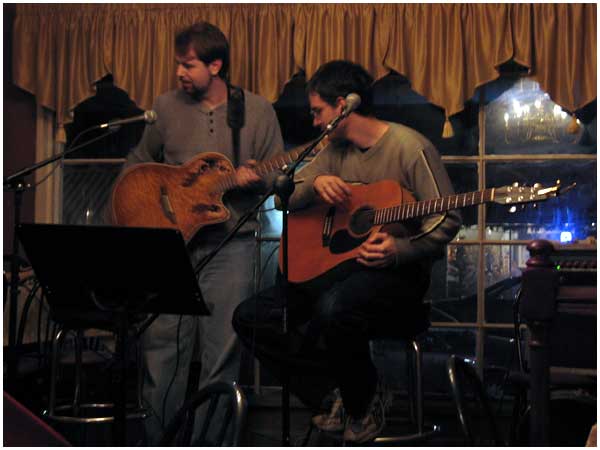 I learned that my friend Dan Frick (who I’ve known since middle school) will be back in the States over the holidays, and playing a show at a bar in Broad Ripple called the “Jazz Cooker.” He’s been living in Japan for some 4 years now, and it’s been a good decade (god, what a horrible unit of measure) since we’ve seen one another.

In the pic above, Dan’s on the right and his friend Scott is on the left. I got Dan’s CD in the mail a while back, and I’ve been looking forward to tonight for a good while. 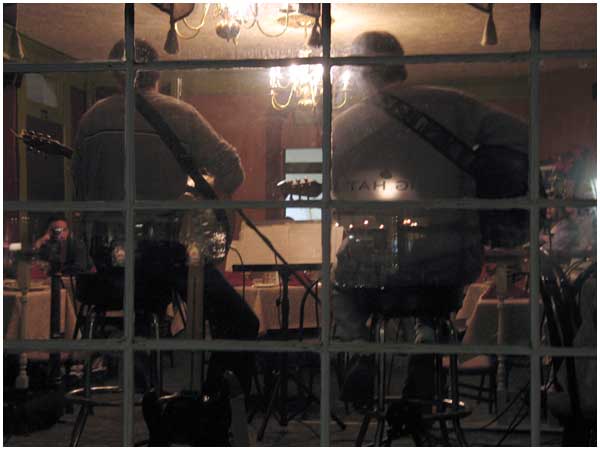 Snuck outside during the performance to grab an exterior shot, looking in. 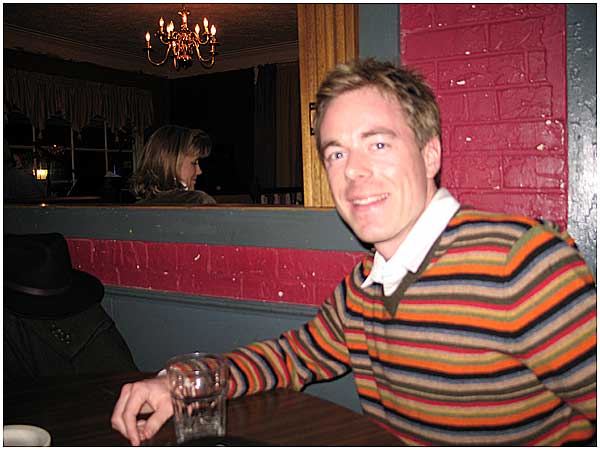 This is Nick, another friend from high school who I haven’t seen in ages and ages. I also hung out with my good HS friend Kevin (also someone else I haven’t seen in a long while). I got to meet his lovely girlfriend Nicole, and the three of us sat around and chatted a bit, listening to Dan play.

It was really great, hanging out with everyone. A bit nostalgic in a way. I got to see three old friends from my childhood, and as we talked about our lives it seemed to accentuate the varied pathways we took when we parted ways. It seemed fitting to have yet another friend singing songs about loss and love.

I really should have taken more photos tonight (I missed a chance to get pics of Kevin and Nicole). I’m not all that familiar with where we were in Broad Ripple (near the fire station). I spent more of my days as a high school kid up the street some, hanging out by a Kroger sign and trying to get someone who was 18 to cop cigarettes for us. I have a lot of fond memories of the area, most of it rooted in being a young kid, hanging out with other kids, the lot of us desperately trying to look and feel cool.

You know how, in the 1950’s, kids were fond of just crusing up and down a particular strip? Just groups of people packed into cars, slowly driving up and down the street? Well, seeing as how Broad Ripple didn’t have much of a strip, most of us took to storefronts and doorsteps. Instead of driving around, we chose a spot and settled down with our hidden pints of Southern Comfort and Marlboro Reds. And you could always tell if there were girls out and about, since they tended to smoke cloves; Broad Ripple is, in my mind and nose, synonymous with clove cigarettes.

Next time I’m around Ripple, I’m going to definitely need to take pictures. You know… so you can get a better sense of how cool I was in high school.

After the show, all of us headed over to a local Mexican joint for some late-night grub. Kevin, Nicole and Nick decided to go looking for gyros instead, so we parted ways momentarily. I got the chance to talk a bit more with Dan’s friend Scott, and his wife. I also met Corey, who originally did all the sound work on Dan’s CD over at The Lodge – a recording studio in Indianapolis.

I got to talking with Corey a great deal, and we seemed to have similar outlooks on the world. He is, I suspect, someone who is also a secret workaholic, based on our talks about our respective jobs. The folks who ran the Mexican place were nice to let us sit and eat (despite the fact that they were breaking things down). They had locked the front doors after our arrival and so, when Kevin, Nicole and Nick showed up, they were locked out. When we tried to get them to open the door, they asked us to keep it locked for a bit (they were emptying out the register, and didn’t want more people coming inside).

I tried to use my masterful Charades skills to convey this message to everyone outside, but to no avail. After 5 minutes eating outside in the cold, the guys behind the counter finished their money counting and opened the doors up.

After a while, everyone parted ways. Kevin and Nicole said their goodbyes, as did Scott, his wife and Corey. Everyone traded info, and there was talk of hanging out again before Christmas.

Standing outside, Dan, Nick and I decided to keep at it. So the three of us head to a nearby bar for some more drinks.

Note: I was drinking Coke tonight, and that’s it. I have this thing about not drinking at all, if I know I’m going to be driving.

So we hang out at some bar per Nick’s suggestion (the only one worth going to, given that it was close to midnight on a Tuesday in Indianapolis). It’s a tiny, tiny place. Maybe two tables in front, a small area with two dartboards, and then the bar. All told, there were maybe 16 seats in the place, minus the stools at the bar.

We fell to talking a bit about relationships, dating, and meeting people. And, of course, we turned to Internet Dating. We kicked around the pros and cons, and I mentioned how I am seemingly an ideal candidate for Internet Dating… but have an aversion to it, and haven’t tried it.

Two girls next to us chimed in on the whole dating thing, and the five of us moved into a larger conversation that continued until the bar closed down. The two of them were surprised to find that all of us were high school friends, and had attended North Central High School (where they graduated as well, a few years after us). We talked more about our jobs and where we lived, etc etc up until the lights came on and everyone started to make their way out.

We said our goodbyes (it was one of those bar converastions where we never really exchanged names), and they took their leave. I hung out a bit longer with Dan and Nick, as we were discussing our plans for the upcoming days. And as we walked outside, I noticed that the two girls we had been talking to were hanging around the front door, looking at a nearby window display.

On seeing us walk out, they came over and asked me what I was up to. I turned around to ask Dan and Nick if they were taking off, but when I turned I saw that Dan was already rounding the corner and Nick was walking away towards his car.

We did the smalltalk thing for a bit, and I did end up finding out
their names (Erin and Brie). And just as I was leaving, one of them quickly asked for my phone number! I was taken aback a bit, and started laughing some. I gave them my folks’ number, but let them know that I was only in town for a few days, visiting. I also jotted down the blog address, so they may or may not find this. I did try to get them to let me take their photo, but they turned it down.

The whole phone number thing took me by surprise – that’s something that never happens to me. I must say – that was one hell of an ego boost. I was smiling to myself the whole rest of the drive home.