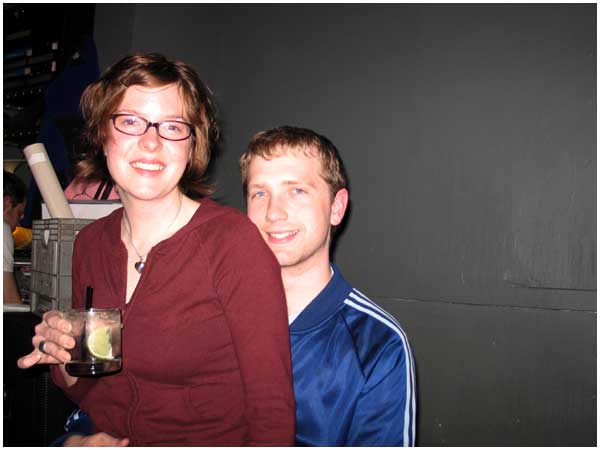 Headed over to Danny’s tonight, to listen to Leslie spin a bit with her coworkers. It’s a slow night there on Sundays, but I must say that I do prefer it there when it’s very low-key. Not a lot of bodies to slide through to get to the bar, and it’s just more comfortable there in my opinion. It fits the mood of Danny’s better when it’s not crowded wall to wall.

Quick shot of Leslie and Chris. It’s always a crapshoot inside Danny’s, as it’s super dark and a camera flash is like the sun appearing momentarily.

I met a few folks tonight but, apparently, my short-term memory is shot. I met Leslie’s friend Emily (I think that was her name), as well as her fellow DJ’s and coworkers (Ben and something else?). I also met Leslie’s roommate Eugene, and we talked DVD/video production for a bit.

I talked with one of the DJ’s about a song that caught my ear (Ben? Brad? I met four new people tonight – how hard is it to remember four names?). He showed me the cover and I made a point to write it down: Robert Fripp’s The League of Gentlemen. There weren’t any lyrics in the bit I heard – mostly electronic (I thought of Múm at first). Will have to check that out.

Had a cool chat with Leslie towards the end of the evening. We discussed World of Warcraft, and I tried explaining how a game that’s comprised mainly of small, repetitive tasks can be so darn addicting. We talked about meeting folks online. We also gravitated back to talking about smoking, and how hard it is to shed all the associative elements that come with smoking.

I took my leave around quarter to one, happy that I did get out of the house (more than just for a my daily trips to get coffee). Justin has always been a good check for me, as he tends to call me out when I become too much of a homebody. With him gone for three weeks on vacation, I’ve wondered how much I’ll lean towards the hermit thing, especially since I’m still working from home day to day. Tonight was a lot of fun – and a reminder to me that I should get out more.

« On the plus side
Acquainted with the night »