A long while back, I got an invite to go canoing from Gina, a friend of my friend Kim. Today was the big day, and I woke up pretty early to do all my shopping.

The night before, I made a big list of stuff to get (sunscreen, water, food, etc). Ran around all morning getting everything I needed, and picked up Will. We then stopped off at Aliance to get some coffee, and were on the road by about 9:30 AM (my original intent was to leave at 9, but I ended up running late).

Here’s something new I learned, in my morning errands: you can’t buy booze before 11:00 AM on Sundays in Illinois.

It’s about 90 miles from Chicago to Wedron (we were heading to a place called Ayer’s Landing). But we made some good time, and made it by 11:00 AM. 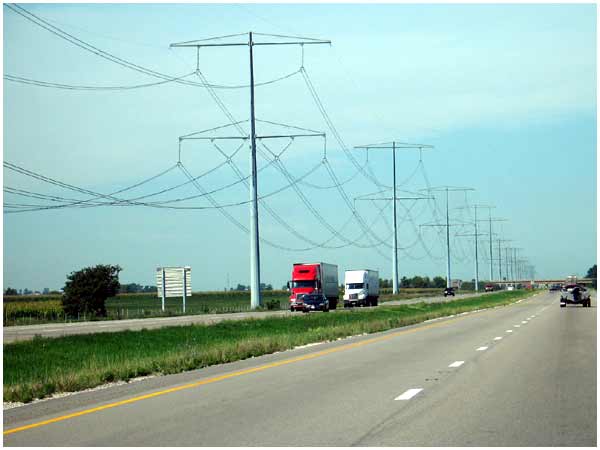 As I was driving, Will served as photographer. Right around here, I was reminded of my fascination with the wires I saw when driving Southwest.

Twait road. I don’t know why, but the name made me giggle.

Soon after this, we took a wrong turn and arrived at some other canoe rental place. But, as though God were willing us to drink, this canoe place had a bar on site and we were able to get both directions and a six pack of Budweiser. Let’s hear it for serendipity!

Once we arrive, we meet up with Gina and her boyfriend Max, as well as Lilia and Bruce. Once we check in, we’re herded onto a school bus with other folks who are taking the same canoe trek.

There are three trips I believe, varying in overall length. There’s the six mile, the twelve mile (which we were all doing), and a twenty-four mile (which requires two days). The schoolbus would take us twelve miles out, and we would wind our way back to Ayer’s Landing as our final destination. 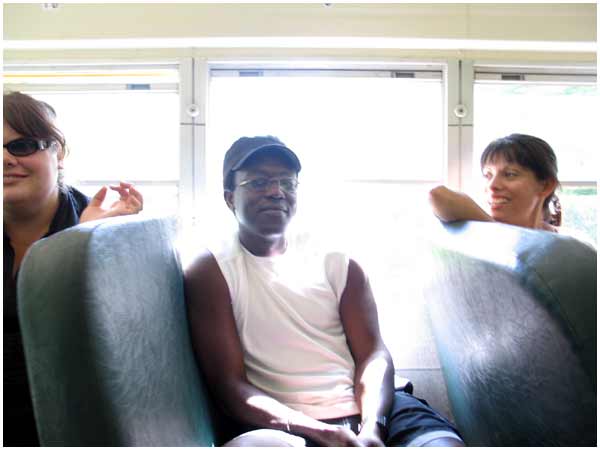 Soon after I took this shot, our bus was stopped for a bit. On looking out, we saw that we were driving near a tractor parade. I quickly jumped over by Lilia and shot this video: 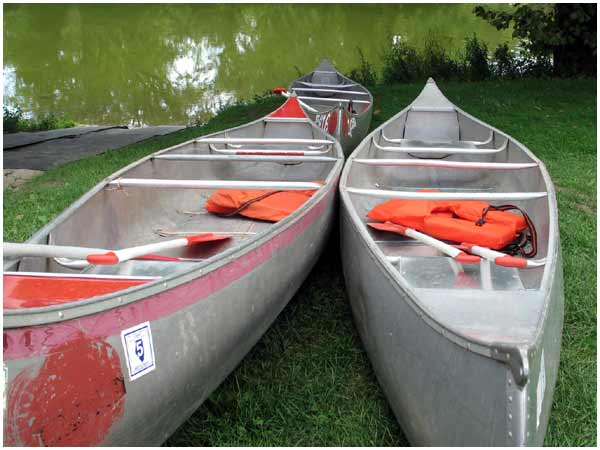 Gina and Max, adventurers and thrill-seekers. 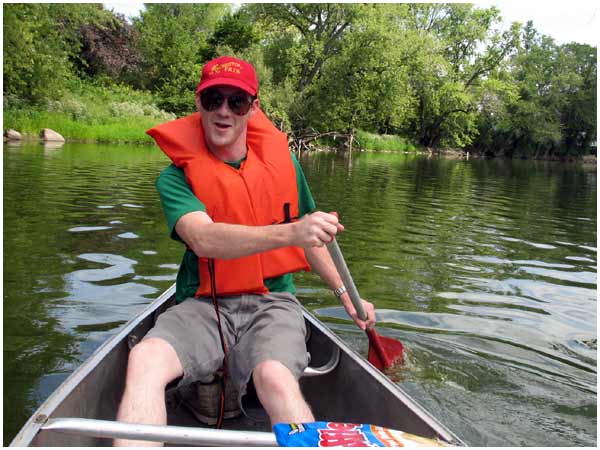 You might not be able to tell, but Will is an honest to goodness Eagle Scout. Whereas I only made it to, like, Second Class or something weak like that.

I figured, if we got separated or lost, Will and I could combine forces. With his outdoors knowledge and my ability to leech off of people with outdoors knowledge, I was pretty confident we could face any challenge. 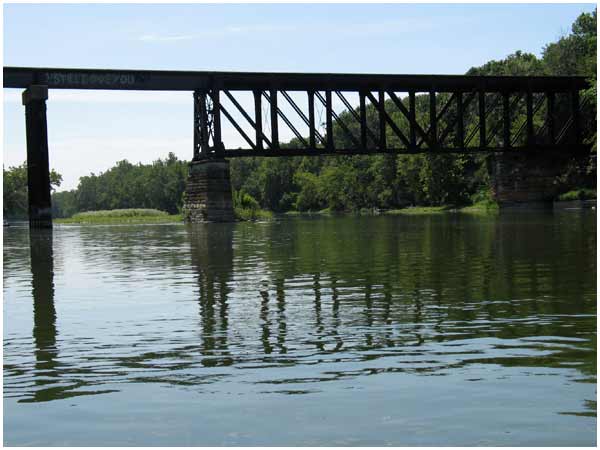 A cool bridge (and one of the first) that we passed underneath. I was initially taken by how the tracks just seem to stop, halfway. 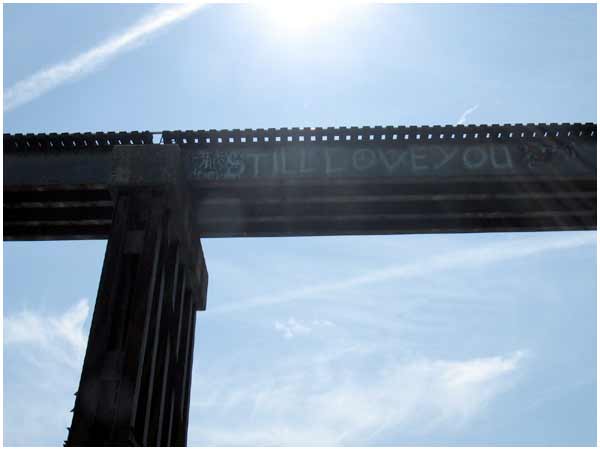 But on a closer look, I realize why Will was so taken with it. 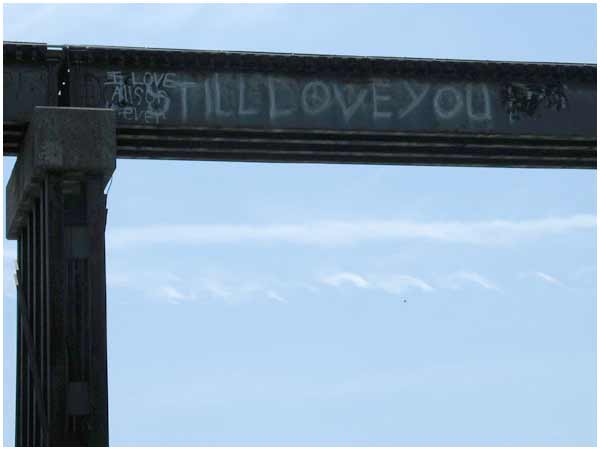 Another closeup of the graffiti love note. 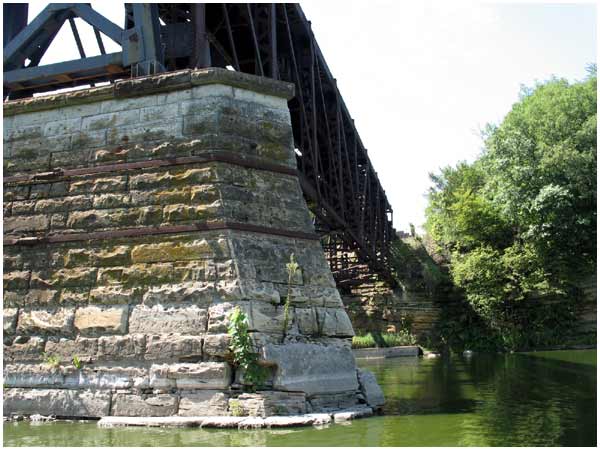 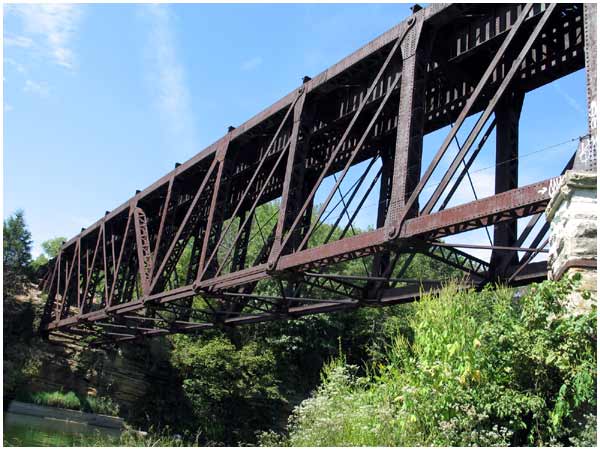 Not sure what this is, as there doesn’t seem to be a solid roadway for anything to cross, despite all the steel girders.

I should mention at this point, I’m pretty nervous about my camera. I debated whether I should bring it along, but ultimately decided that I wanted to document everything as much as possible.

Though it probably wouldn’t have helped, I stuffed my camera inside a ziplock bag between uses. Just in case. 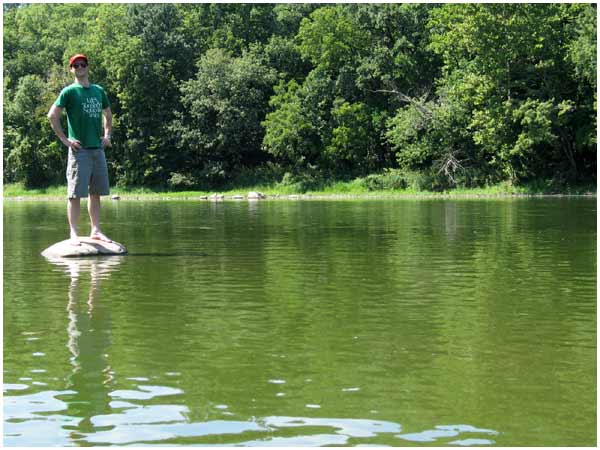 This was a pretty fun shot. We passed a rock sort of jutting out, and I had Will step out onto it while I paddled away.

We were looking for a spot to pull over (and believe me, it was hard to find a good place) for what seemed like forever. Maybe about two hours after we set off, we finally find an open bit of land where we can sit down and have some grub.

I have to tell you – food never tasted so good. By this point, I was pretty ravenous, and scarved down a ton of chips and sandwiches and even a little pasta salad. I brought way WAY too much food (I had packed food enough for double the amount of folks we had), but it all tasted spectacular.

We all chowed down, rested up, and then resumed our trek down the Fox River. 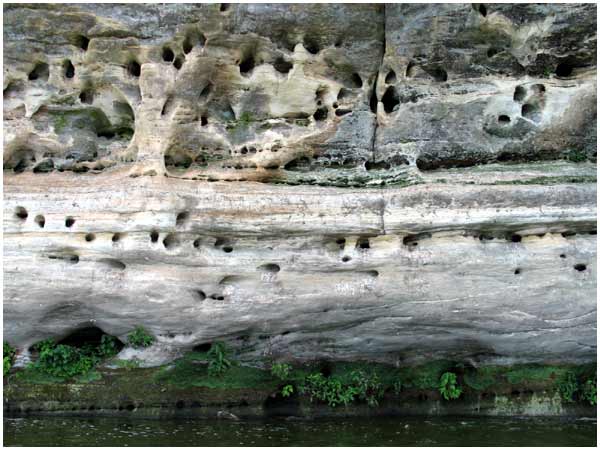 Some interesting formations in the rock. The river was pretty low, and so I think this stuff is typically under water. I’m not sure if these crevices are made by insects, fish, or just the river and time. Still though, pretty neat.

Me and Will. Actually, this shot is from much earlier in the journey. After maybe 15 minutes, we both took our lifejackets off and used them as seat cushions. As I mentioned, the Fox River was pretty low and I’d say about 90% of the time we could hit the bottom of the river with our paddles. So… if you fell in, all you would have to do to avoid drowning is just stand up. 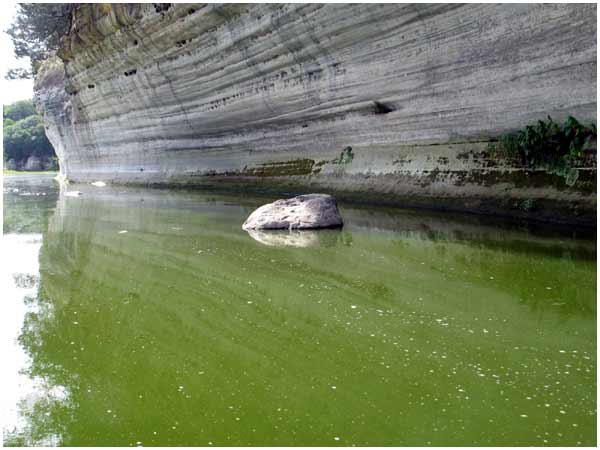 This is nearing the end of our trip. Honestly, after lunch, the whole river excursion seemed interminable. It felt like we weren’t making any progress at all, and that it’d be well after dusk by the time we arrived back at Ayer’s Landing.

But, I caught a second wind, and the last 1/4 of the journey was incredibly enjoyable. Will and I ended up chatting with several other parties, pulling up alongside them. Which was quite fun – everyone was incredibly, incredibly friendly.

During the last hour or so of our trip, we all began exploring the rock walls a bit more, taking our time, lingering a bit more.

Lilia and Bruce, getting re-situated. 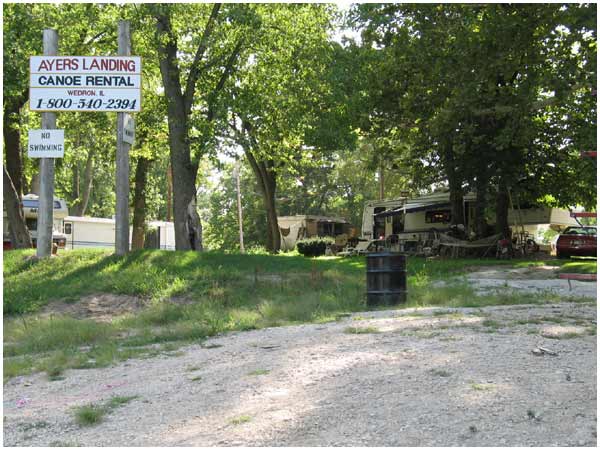 Back at Ayer’s Landing. 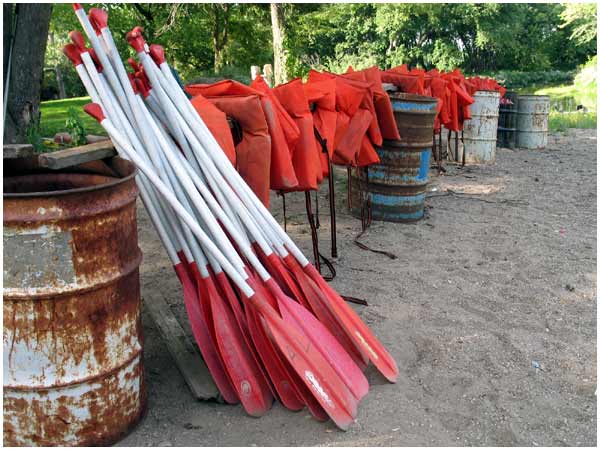 Ahh. What a fun time!

Despite my burnout about halfway through, I had a total blast today. I’d love to try this trek again with a bigger group of folks. The 12 mile, which sounded really daunting to me, is totally doable within a day and didn’t take nearly as long as I thought (even with the still waters and low levels). I’d love to see what this trip would be like if the Fox River was at its normal level.