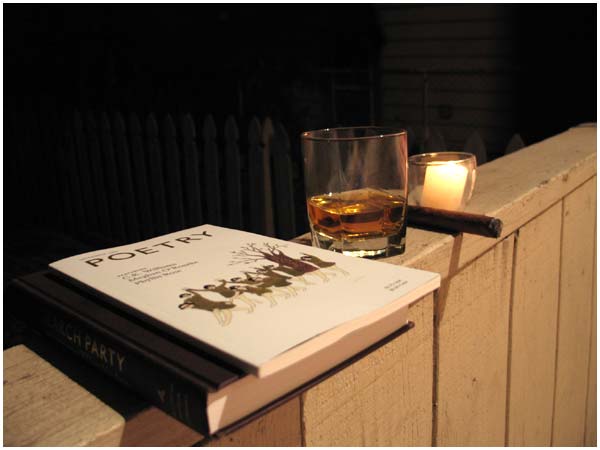 My internet connection at home dropped out on me (which is a rare thing), circa 9 PM. I decided this was a good excuse to step away from the computer and went out on my porch to read a bit. In addition to pouring myself some Scotch, I grabbed an old cigar I had lying around (I bought a bunch way way back, for Steph’s birthday – I’m still remiss about updating from that day).

I permit myself cigars from time to time, but still no cigarettes. Smoking tonight though, I found myself missing cigarettes terribly, and enjoying the taste of smoke. Cigars are close to cheating, since I’m not actually inhaling, but it seems a slippery slope. I’m fairly certain if I try a cigarette, it’ll be game over and I’ll lapse back into smoking a pack, pack and a half a day.

For a while though, I enjoyed the mixture again – smoking, drinking, poetry. A part of my mind was convinced that were I to pick up cigarettes again, I’d start writing more. But I think that’s just the nicotine addiction talking, trying to convince me. For a good while though, outside in the warm evening, reading over poems with the taste of smoke rolling over my tongue again… I believed that.

And apparently now, I can’t hold my smoke. When I decided to go back inside, I realized that I felt a little off and a little nauseous. Once inside my apartment, my stomach started to churn and for a while there I thought I was going to get sick due to the cigar. Serves me right I guess, mostly for having that writing/cigarette thought. I think my brain was trying to respond to that thought, to show me how silly that was. If I want to write more, it seemed to suggest, it’s not about smoking cigarettes again… it’s about being disciplined enough to write every day.

« AudioPlayer Updated!
On the way to work »