Ann Paeth: One Year Ago

I knew that I was fast approaching the anniversary of my friend Ann’s death, but I didn’t realize that it was tonight. I’ve been thinking about her recently, but very briefly – knowing that I’d be really reflective once the date hit. And tonight, I didn’t even realize it was a year ago that this happened. It totally took me by surprise.

I guess it did the first time too.

Tonight, I’ve been digging through old boxes looking for photographs of Ann, for poems she’d written. I didn’t take many photos during my time at OSU, and I’m kicking myself for that not. I wonder if I’m not trying to overcompensate for all that lost time, obsessively carrying around a camera like I do.

Still, I remember Ann as not really caring to have her picture taken much. I found a few, and decided to try to take a picture of one of them, so I could post it on here. 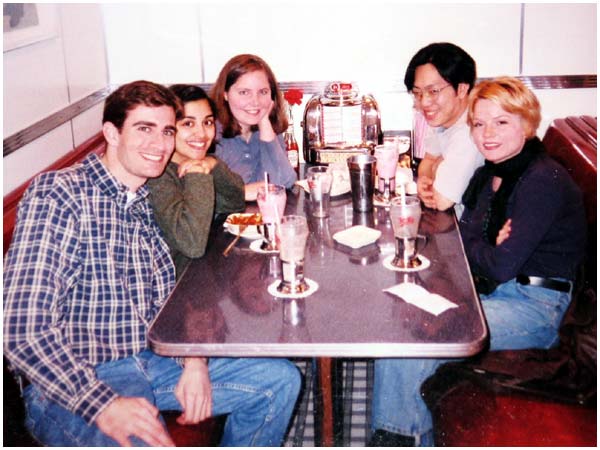 This was taken in my first or second year in the MFA program at OSU. L to R it’s Mark, Aimee, Ann, Me and Melinda. We were at some fast-food chain place called Johnny Rockets – burgers, fries, shakes and such. This was probably a year or two before Ann and I started dating.

Ann was really quite incredible. She had an amazing sense of humor, knew Simpsons trivia better than almost anyone else I know, did Math Puzzles just for fun… she was pretty terrific. Every once in a while, I’ll find some fragment, some little thing that will make me think of her.

Right now, I’m feeling particularly shitty in regards to the shamrocks she gave me. Ever since the workers started doing construction in my place… the plants haven’t been getting much love. Just yesterday, I realized that the one shamrock that flowered was officially dead.

Not a huge thing. And I’m used to the dormant period with these flowers where it seems like nothing is happening at all. But from a symbolic sense, this makes me feel like shit. This plant was the last living thing that tied me to Ann, and I couldn’t even keep the fucking thing alive. Light and water – really, how hard is that?.

My relationship with Ann deteriorated a lot, after I moved to Chicago. Over the past few years (and especially since her death) I realize that I project a great deal onto these flowers. What used to be healthy and vibrant has since dwindled into absence.

Before we parted ways in Columbus, there was a time where I considered moving out to Riverside, California with her. She was bound for a PhD program in Dance, and instead of going with her out West I decided to pursue a career in Chicago.

It’s idiotic and unreasonable, but I wonder what would have happened had I moved out there with her. I know there was a large part of her time in California that made her unhappy, and a part of me wonders “what if” a great deal. It’s a ridiculous notion, but when I was at her funeral it was a genuine thought I had in my brain. I know it makes no sense. I know it’s unfair. I know it’s just me throwing guilt on myself. But a small part of me felt that, had I loved her more, she wouldn’t have died.

Earlier tonight, I did a random google search and came across a memorial to her, written by a professor of hers from Hope College, Jack Ridl. I remember hearing these words during her funeral, and was touched at how well they captured Ann’s personality, her quirky spirit.

Attending her funeral helped me a great deal, but it was also an incredibly lonely experience. I drove out to Bay City alone and knew no one there. I explained who I was and how I knew Ann (“We were in graduate school together; we dated for a while as students”), but nobody knew who I was. I met her family, and they were struggling with the weight of what had happened. I remembered Ann’s father, and the day we all helped her move in to her new apartment – but I don’t know that he remembered me.

Everyone else there seemed to know Ann so much better than me. Me, with my small window of time with her, knowing her a few years in school. Each time I’d introduce myself and describe my relationship with Ann… it felt like I was trying to justify my being there, like I had to explain what I was doing there, attending her wake. It was an incredibly lonely experience.

For both the wake and the funeral, I felt like an outsider with my grief. There were conversations and consolations, but nothing beyond a nod, a handshake, a reassuring hand on the shoulder. During the funeral, the pastor read snippets of Ann’s poems, and this drove me crazy to no end… as he didn’t read a single poem in its entirety.

Between the wake and the funeral, I stayed in a room at a Holiday Inn. I got drunk at the bar by myself. I wrote short poems that tried to summarize how angry I was at God. I cried a lot, both in public and in private. In the church, during the funeral, I sat alone in my own pew, near the back.

That whole weekend, I really, really wanted to hug someone. But I didn’t know anyone well enough. And though I wanted to, asking such a thing of her parents seemed inappropriate. And I know if I did, I would have totally lost it. And so I didn’t.

But I wanted to.

Tonight, as the evening’s progressed, I’ve become more and more sad. I’ve been crying a fair amount, as this has been the first time I’ve thought of Ann in a long, long while. I think it’s been accumulating.

But it’s good. I’m getting it all out and the sadness, though it hurts, is becoming less frequent. Attending her funeral helped me immeasurably; I was a wreck before, and afterwards… I felt I could manage my grief better.

I still miss her a great deal. And I know tonight is a mixture of things. It’s me and my self-pity. It’s melodrama. It’s mourning and remembering. It’s coming to terms with the fact that she’s a full year in the past.

The funeral itself was open to the public, but the burial was a private affair. I’m not even sure where she’s buried, actually. After the service, the family left for the burial and I got in my car and drove the other direction.

I’ve mentioned this before but I really do plan on driving back out to Bay City some future day. Drive there, find her, and just talk. I’m not sure about what, but it’s something I know I will do. Much like attending the funeral was a necessary thing for me after her death, visiting her again seems like the next step. The next thing to do.

« Downtime
More than one use! »