Steph and Liz invited me to attend a costume party this evening at Subterranean. Liz didn’t get home until about 10PM, so I ended up going over there myself ahead of them, and check out the place.

I had never been upstairs at Subterranean before. Color me impressed! A pretty slick stage area, with an open ceiling that allows the third floor to look down on the second.

As it turns out, this costume party was some kind of fundraiser for a local filmmaker. Someone was making a zombie movie, is what I’ve gathered. I was hazy on the details. There was quite the raffle going, several bands, and a sign-up form for anyone who wanted to help out as a potential zombie in the film. Like I said, a bit hazy on the details – I’ll have to ask Liz and Steph about the particulars. They got invited by a friend, and I basically tagged along.

To top things off, there was also a contest for best costume going on. Two categories, actually: best zombie costume and best non-zombie costume. So, in the pics below, you’ll likely see a ton of undead. :)

Early on, I ended up talking at length with a woman who was dressed as a hippe. Turns out, she and her husband make candles for a living, and have a booth at the annual Renaissance Fair. Turns out, her son’s the one making the zombie movie. And to top things off, she was carrying around a cabbage patch kid dressed in some handmade outfit which, I learned, was her son’s very first Halloween costume. Very sweet. 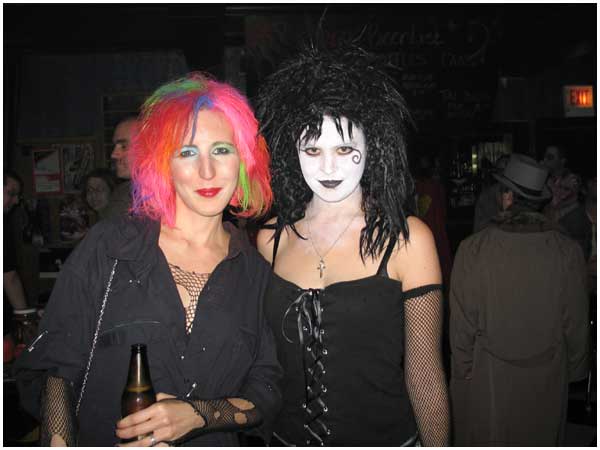 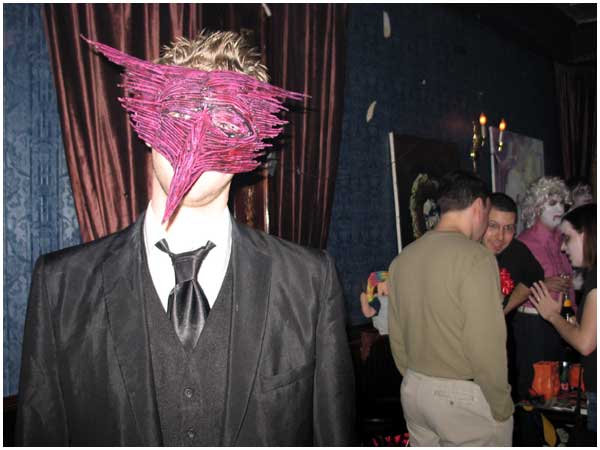 The whole time, I was in my Operation Costume and had a hard time taking pictures. Limited arm movement while wearing that thing. Once the girls showed up (and I had a few drinks in me), I started snapping away a bit more. 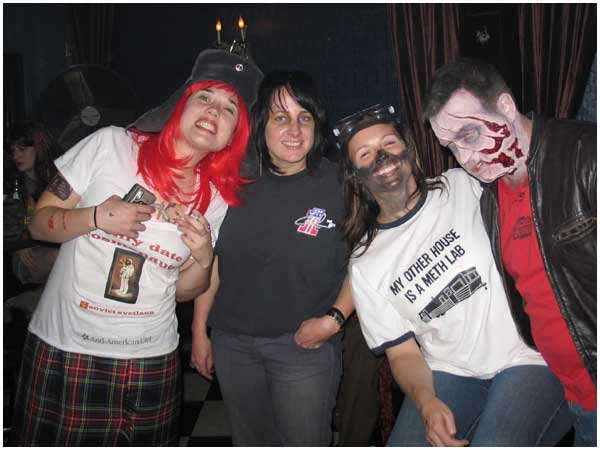 On the left – a very cute girl who I tried to chat up unsuccessfully, dressed as anti-American girl. I gotta say – her tattoos were remarkable. And at the time, I couldn’t see her shirt – but it’s making me laugh now: “I only date cosmonauts.”

I’m not sure about the costume for the girl in black. The one with the soot-covered face is a meth cook (man, do these folks have some great t-shirts or what?). And a killer zombie on the far right. 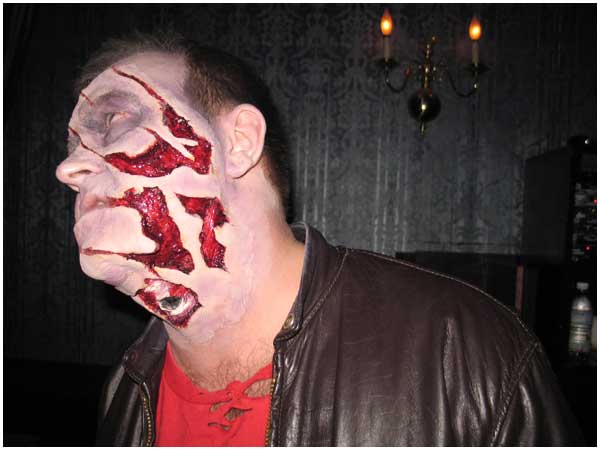 Check out the detail on this! I’m totally in awe. Though he didn’t win the “Best Zombie” outfit… in retrospect, I really think he deserved the prize. 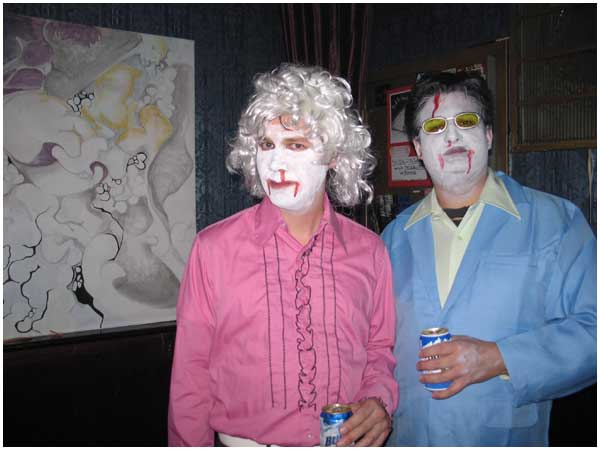 I think these guys were in a band that played earlier, before I arrived. 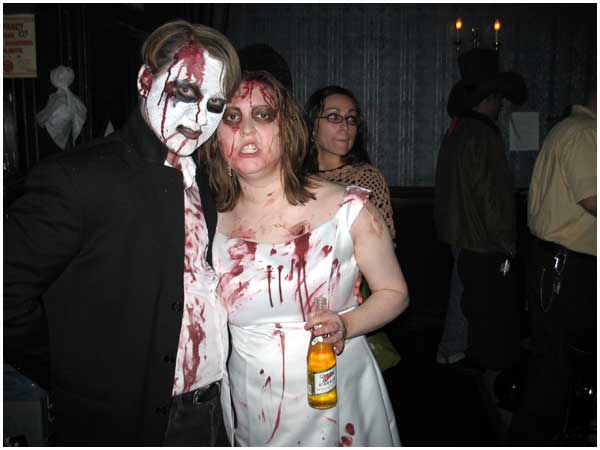 I totally love how many undead costumes there are tonight. 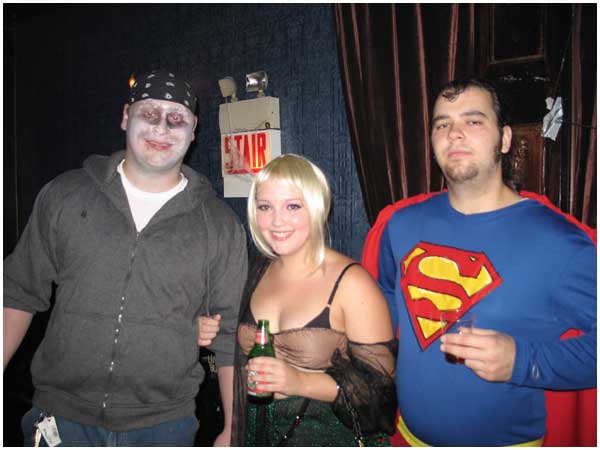 A few other folks, who joined in when I asked Superman for his photo. Dig the spitcurl! That, my friends, is attention to detail. 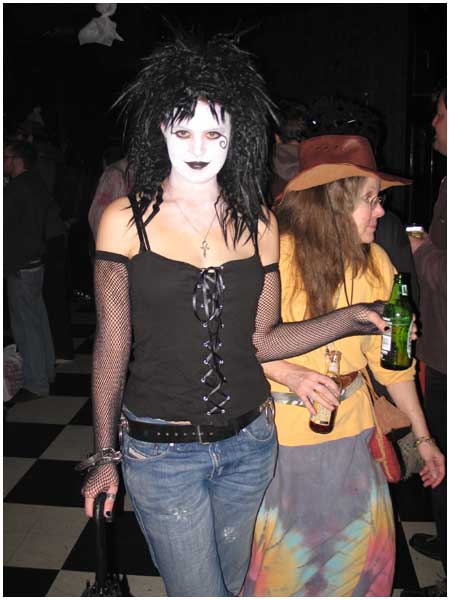 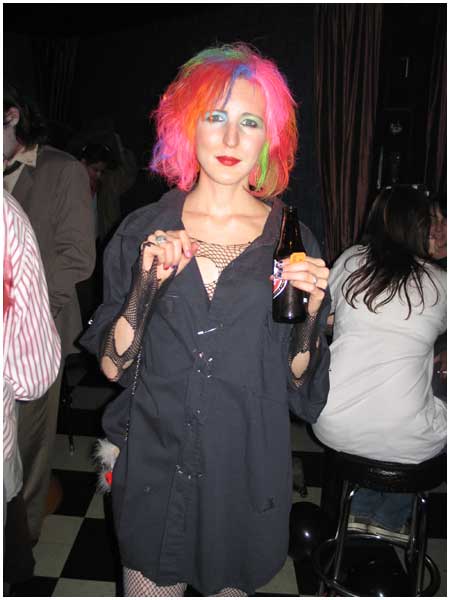 And yes, that’s her actual hair that she colored! The more I think about this, the more blown away I am – the judges totally overlooked this. Coloring your own hair to this degree, for the costume? That’s dedication. 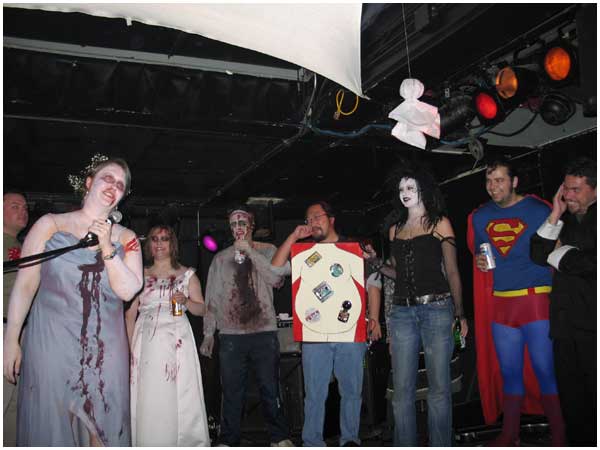 A bunch of us, on stage for the “Best Costume” contest. There were a few judges in the audience, and each judge nominated their favorite costume. 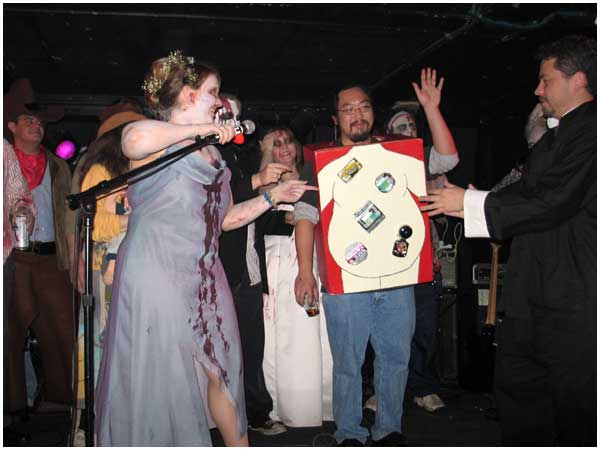 Here’s me, winning for the “Best Non-Zombie” Costume.”

I think my prize was two tickets to the movie, once it’s finally done. 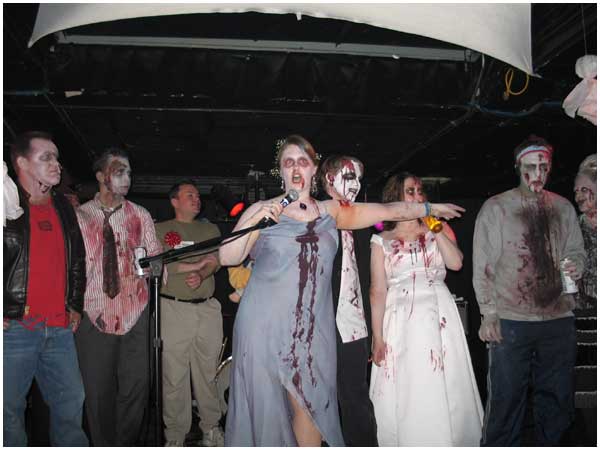 And for “Best Zombie Costume,” the dead jogger. Which made me totally think of Pet Cemetary.

Yet again, in hindsight… that dude with the cut face and exposed windpipe gets my vote.

« This is absolutely delightful
Updates! »