Got an invite from Chelsea earlier in the week to attend a show called Corpus Delicti. I was feeling the hermit thing this weekend, but MAN am I glad I went! What a great time! 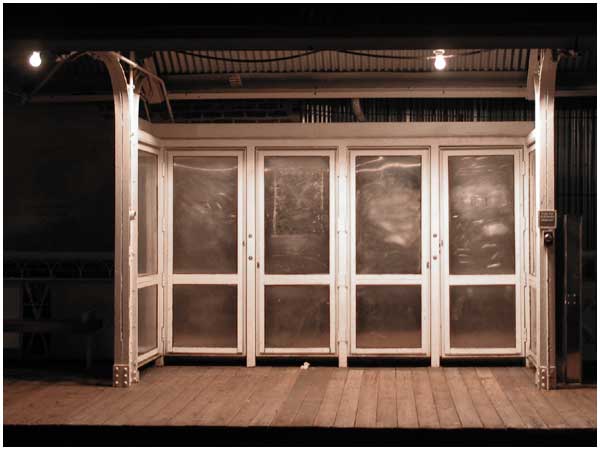 We met up at Penny’s, under the Damen Blue Line stop for some beer and Thai beforehand. Then, we jumped on the train and made our way down to the University of Illinois Medical Center (where the play/performance was to take place). 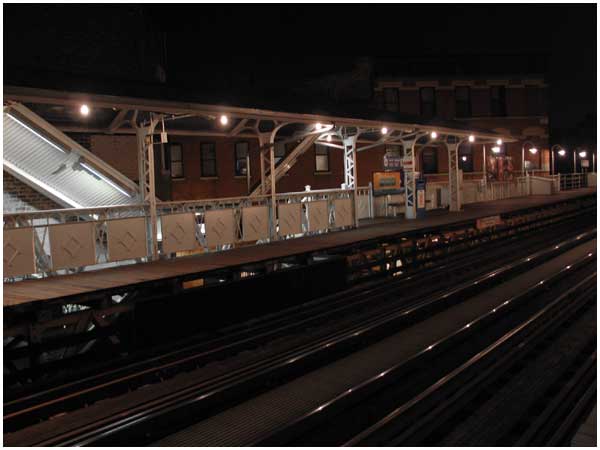 Of course, I snapped a few pics along the way. 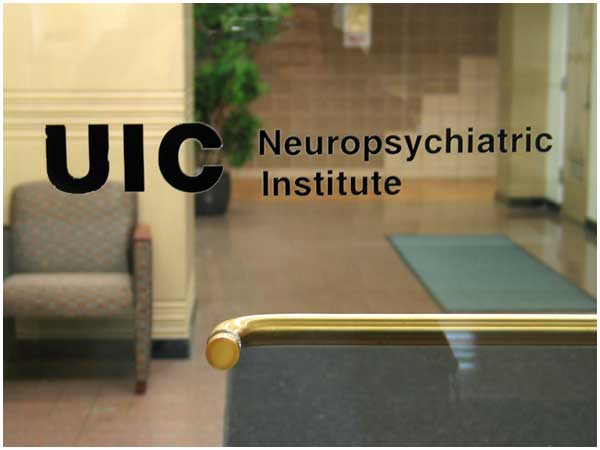 At the doors to the UIC Medical Center Department of Neurosurgery. It was a little weird (and just a tad unsettling) to see the sign, but we were coming to see a dissection, after all… 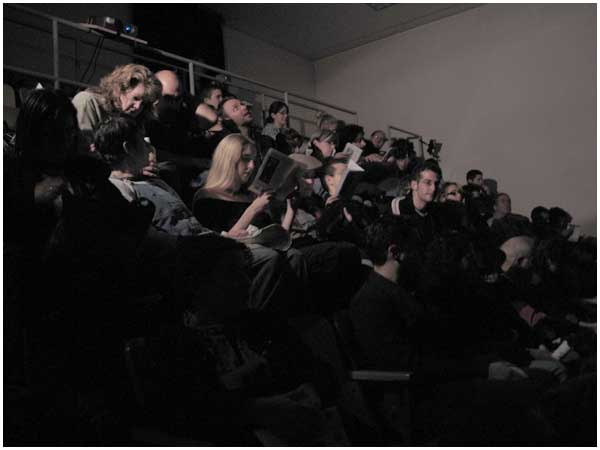 Quick shot of the crowd (the entire time, it was fairly dark all around). The room we were in was up on the 7th floor (but we ended up having to go up a flight to the 8th, so that we could get to our seats). I’m not sure if the correct term for this room is “Operating Theater,” but it’s what I imagined from the website descriptions. The steps were narrow, each row was steep and the chairs were very close together. It was easy to imagine medical students sitting where we sat, doctors teaching on the floor below.

Corpus Delicti begins as an investigation of the art and science of anatomy, as practiced in Holland during the Age of Enlightenment, and immortalized in Rembrandt’s 1632 painting “The Anatomy Lesson of Dr. Tulp. As the audience peers down from steeply raked seats in the operating theater, Dr. Nicolaes Tulp (Larry Underwood) guides them through the taboo territory of the body’s interior. His anatomy lesson is interrupted by Suster Luyt (Meghan Strell) who challenges the ethics of this emerging field of research. Suster Luyt (pronounced LIGHT), the first woman to be condemned to death and public dissection in Amsterdam, reveals her identity as the flayed skin hanging on the wall of Dr. Tulp’s anatomical theater. Dr. Tulp defends his consuming passion for knowledge, and in the ensuing debate, both the living and the dead reexamine their relationship to the human corpse.

The performance was immensely enjoyable. There were three characters, really: Dr. Tulp, Suster Luyt, and an accordian player who provided some great songs/atmosphere (Edit: I think the musician was also the Devil MC, from a show several years ago at the Hideout). There was a big dropcloth over the back of the room, and they used a laptop/projector combo to achieve some pretty spectacular effects.

The characters debated with one another, and Suster Luyt was often in the audience, interacting with people. There was a mix of humor throughout (which I loved), and the audience interaction bits were great. One of my favorite parts was when Luyt pulled a guy onto the floor, blindfolded him, and spoke of how doctors used to dissect people alive, all the while dangling a scalpel while walking around him.

Center stage, there was a life-sized corpse on the table, composed purely of gelatin and various vegetables. As the show continued, parts of the body were cut out/off (the hand was passed around on a tray), and a debate flowed between Tulp and Luyt.

I’m not going to go into the deeper themes that came up. Suffice it to say there was a lot going on – dissection as pursuit of knowledge, as desecration; view of the body in terms of men and women; the use of a corpse/dissection as theater. Cool, cool stuff.

Tonight was their last show, but I highly recommend checking out anything by Local Infinities. I believe that Chelsea helped some with their production of Wax & Wayne, which I’m now sad that I passed on, way back when. I will definitely be keeping my eye out for any future performances by these guys.And also – if you haven’t already, check out the bios of Dr. Nicolaes Tulp and Suster Luyt. Fascinating histories.

I really wanted to take pictures during the performance (some of the lighting was incredible). But it didn’t seem appropriate, so I kept my camera in my bag. Afterwards though, they were letting everyone crowd around to see the body up close and, since tonight was the last night, poke and cut and mess with the corpse.

I went back to the upper corner of the room (we were sitting in the second row). I hope this helps give you a sense of what the space was like, looking down. 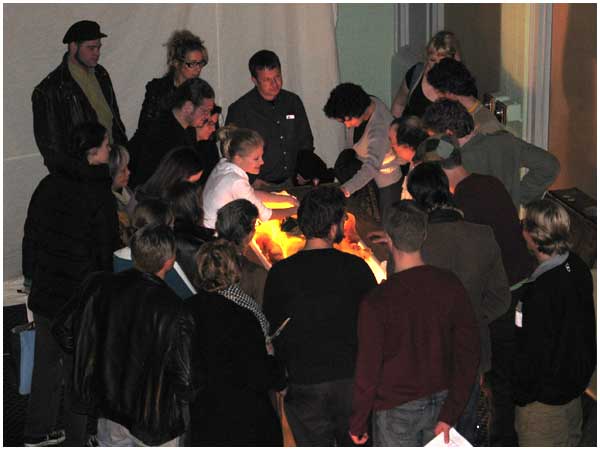 The crowd gathers around the body.

LOL. I was just thinking to myself: how often do you get to type this kind of caption on a blog? 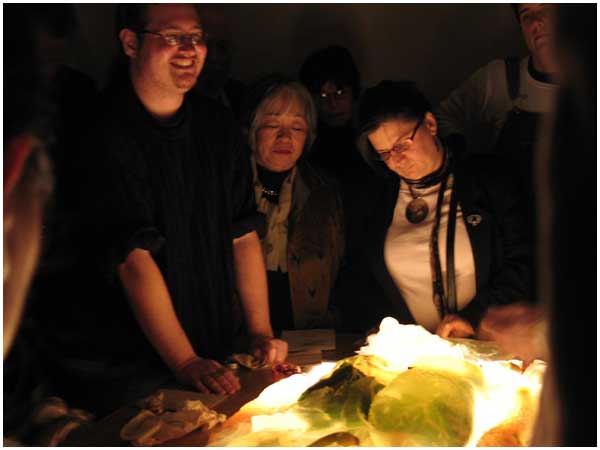 The table the body was on was pretty sweet. There were a system of lights inside the table, and the effect as the light came up through the gelatin was decidedly cool. 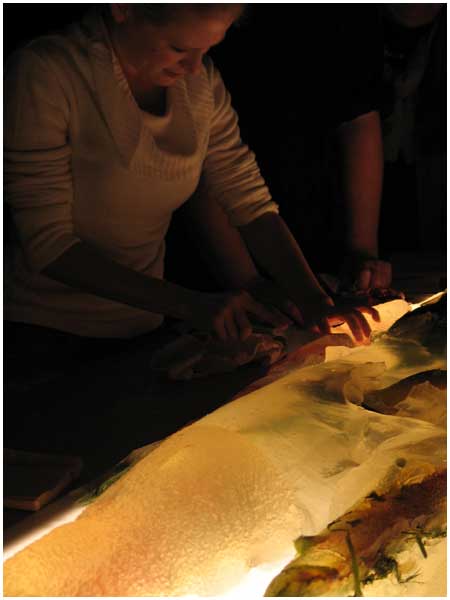 An audience member cuts into the arm. 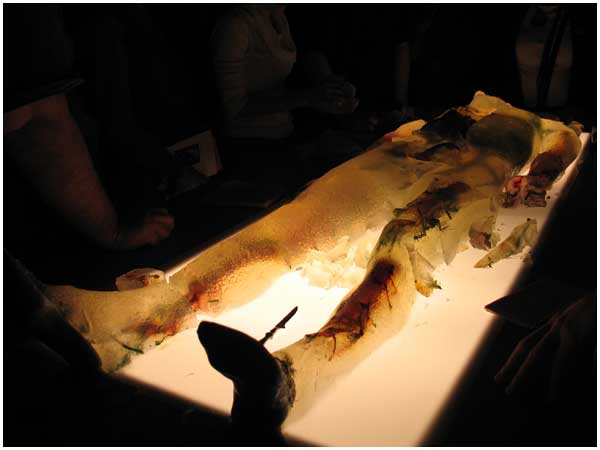 According to the actor who played Tulp, he used his own body to create the mold for the corpse. I think that they made one new body each week (between weekly shows, they could get away with re-using the body). I’m not sure if I caught the right numbers, but he mentioned something like 300 – 400, for each body. Whether he was referring to dollars or packets of gelatin, I’m not sure. In either event, it sounds like quite the task! 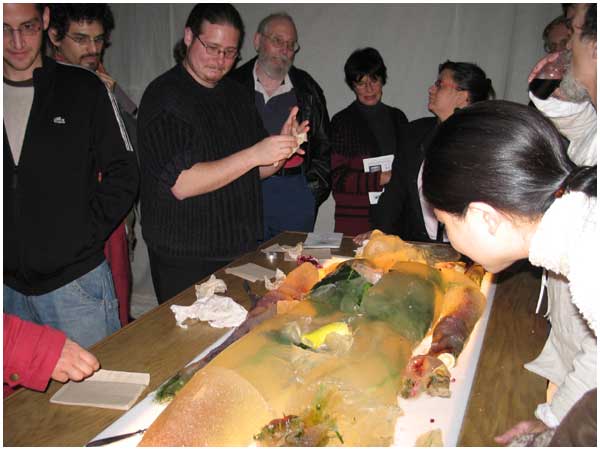 I tried to keep the flash down to a minimum. I love the look on the guy’s face, as he’s wiping his hands. 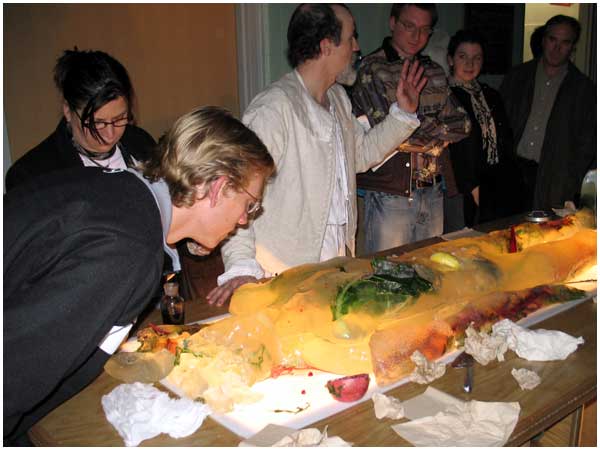 The body really does invite exploration and examination. 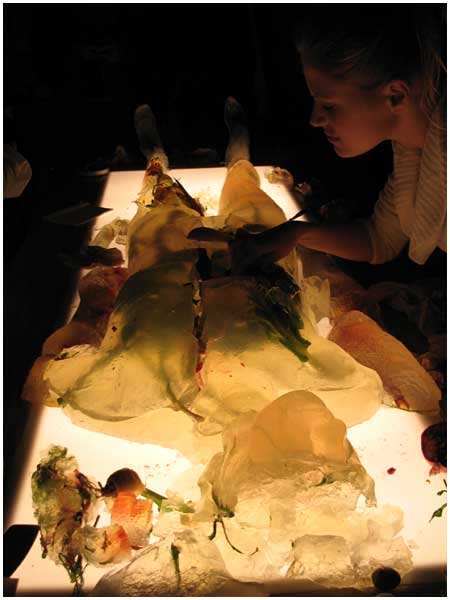 And no, nobody dropped a Junior Mint in there. 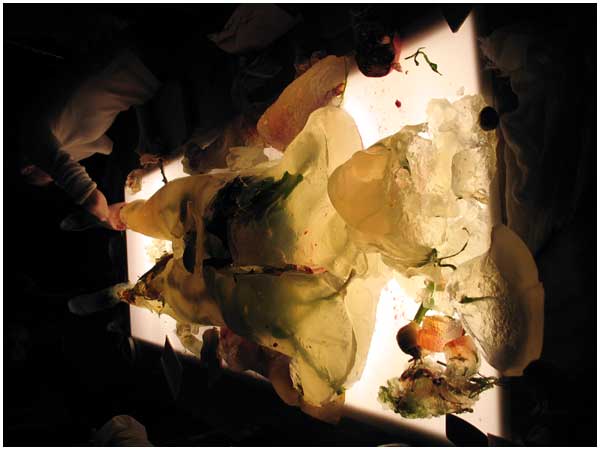 As I said – the lighting creates a great effect on the body. 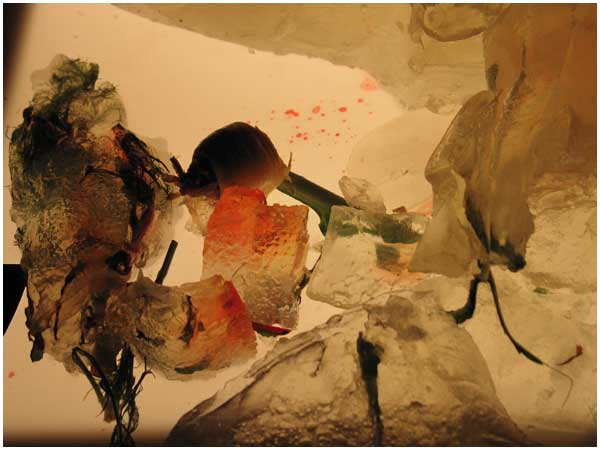 Detail of parts of the arm. 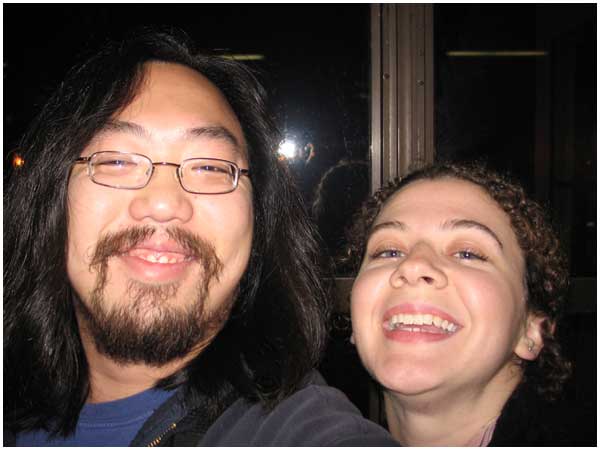 Chelsea and I goofing around, on the subway ride back.

« At the Office Early
On the way to work »