I swear to god… there has to be some formula out there for this. Whenever Justin gives me a ride home from work, we tend to just hang out double-parked in front of my place… talking about work and tech in general. I want to say that, if we’re out there talking for more than 10 minutes… we invariably decide to go and continue the conversation over drinks.

Which is what happened today. 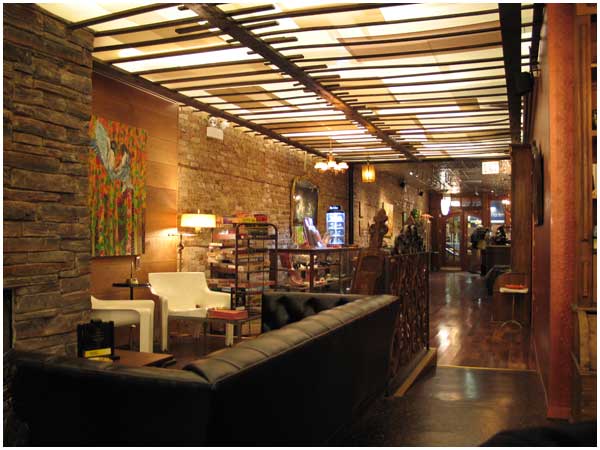 He and I decide to head to Marshall McGearty, a recent arrival to the Chicago scene. With the smoking ban recently, this is the kind of rare establishment that allows patrons to smoke and drink coffee/booze (more info from NPR).

So as I’m inside this church of tobacco… I’m trying hard not to delight in all the smoking stuff going on around me. I meant to take photos of the process (of how they hand-roll cigarettes), but was told I needed to talk to the owners before shooting any pics. So, until I can go back in and talk up the blog… this is the only photo you’ll get.

Justin and I sit down for a bit, and not more than 5 minutes pass before Shirley (aka The Muffin Lady) shows up, and tells us that we’re in her spot. Apparently, she plays cards here frequently, and we were in her area.

After a bit of small talk (she and Justin have talked a lot, in the past), she pulls out some cards and invites us to play a few hands. The game is called “Phase Ten,” and pretty interesting. Sort of like Uno meets Rummy, I think. 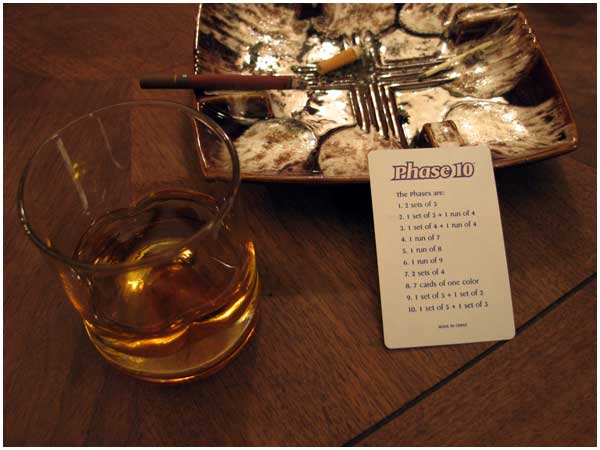 Next thing I know, Will shows up. Apparently, he and Shirley frequently play cards here. Who knew? Small world indeed.

Well, a few practice hands turned into a full-fledged game. Pretty fun, all told. Shirley is quite the competitive game player, and as skilled at cards as she is at billiards.

During our game, this cute girl sat down near us and started reading. I tried to make out the title, but couldn’t really see it from where I was. I did manage to catch her eye a few times, and smiled a bit at her. As we were leaving, I made it a point to catch her eye again and say goodbye. Not something I normally do (introvert that I am), but it felt good – and got her to smile back.

Found out from Shirley that her name is Liz. Guess I need to head back to Marshall McGearty soon. :)

After the game was over (Will ended up being the winner), everyone headed out to Santullo’s for a few slices of pizza. I made my farewells and headed home, having had an unexpected evening out, and an unexpected game of cards. Let’s hear it for spontenaeity and serendipity.

« Updates!
did i ever tell you about my crazy loud neighbor? »