Gretchen, on her cab ride home last night, met a cool taxi driver who recommended a restaurant to her: Continental Cafe. Gretchen had spent a good deal of time in Romania, and so she got along smashingly with her driver… and he raved about the restaurant.

So – me, Abby and Gretchen headed over for lunch. Gretchen swung by in a cab, picked the two of us up… and we went in serach of some Romanian fare.

I guess it should be noted that, at this time, I’m fairly nervous about making sure Gretchen and Abby are enjoying Chicago. I’m trying to think of places we can go, things to do in the evening, to make the most of their visits. For them to have travelled as far as they have, I want to make sure they have fun in the city. 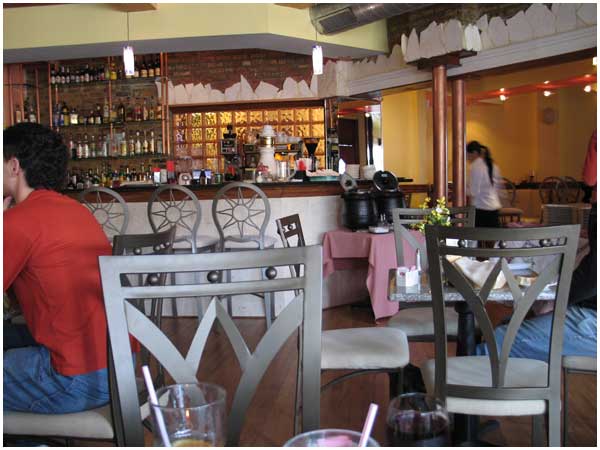 When we arrived, there weren’t all that many people inside. One large table (a big family), and most people were going up to the buffet that was set up against the wall. However – we wanted to order off the menu, and so settled down for a nice lunch. 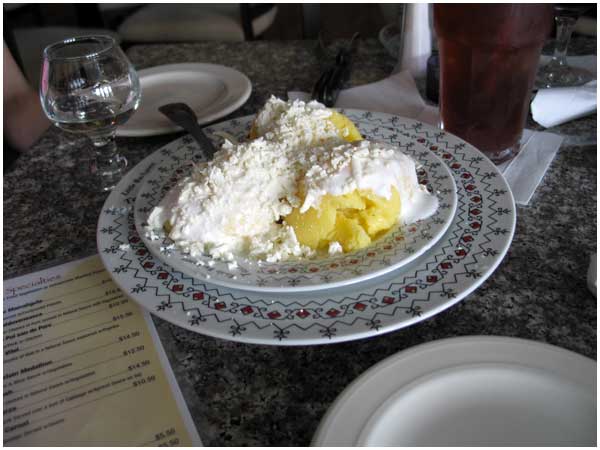 We start off by spliting some polenta (mmmmm sour cream).

Abby had a glass of wine, and Gretchen ordered some Tuica – this clear liquor made from plums. I took a sip of it, and it was pretty good – strong, but not overwhelmingly so. Gretchen raved about its properties, and about how clean it was. You could drink and drink it, and not wind up with too bad a hangover the next day. 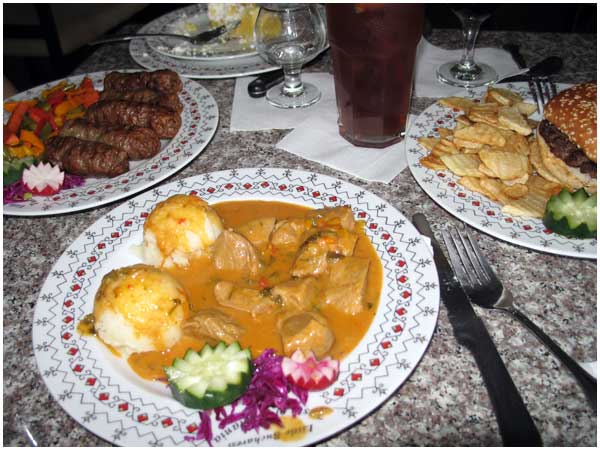 Lunch! Abby got a burger, I got some chicken, and Gretchen had these AWESOME sausages that I’m so getting, the next time I come here. Man those things were so good.

The three of us got into some interesting converastions. Relationships I think. Big life topics, and we went back and forth, trading stories. I remember the converastions were good because we lingered over lunch, and both Gretchen and Abby ordered another round. And though I normally don’t mix food and drink (because of the splotchy thing that tends to happen, when I mix booze and food)… I decided to have a glass of Tuica. I figured – what the hell. Why not? 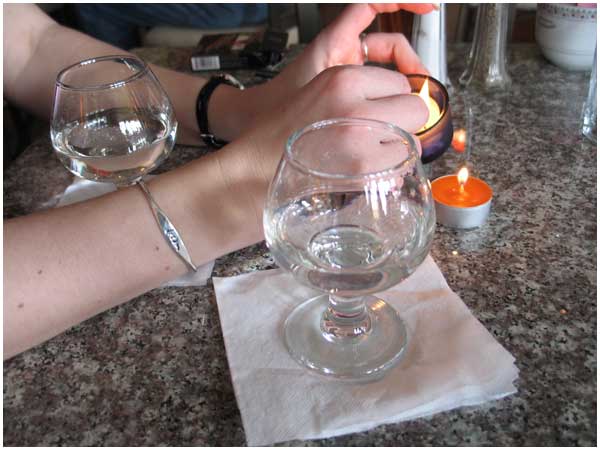 Two glasses of Tuica. Gretchen, candle-lover that she is, lighting up a new one for the table.

The owner of the restaurant was very friendly, and made it a point to come over to our table after our meal. I guess, compared to everyone else in the room, it was fairly evident that we weren’t regulars… but he was curious how we had heard of the restaurant, and was just an all-around super nice guy. He seemed particularly delighted that we knew what Tuica was. :)

Once Gretchen talked with him about her travels in Romania, you could see him light up. I’m sure he would have done it anyway, but he insisted on buying us a round. When we told him we had just ordered one, he said “then I’ll buy your next one.”

So… looks like we’ll be here a little while.

Well, believe it or not, the next drink comes. And we talk some more. And we decide to order another one. Outside, the daylight fades a bit, and it gets a little darker. And a little later.

Next thing we know, it’s dark outside and people are filling up the restaurant, ordering dinner. And! Of all things, the cab driver that Gretchen met last night shows up!

After a bit, we combine tables and all order… you guessed it: another round. Gretchen and Abby are both on the phone, calling folks to try to see if anyone else wants to meet us for dinner. Abby’s friend (Richard?) joins us, as does the Chelster. What started out as a lunch, has now mushroomed into a full-on, all-day event. 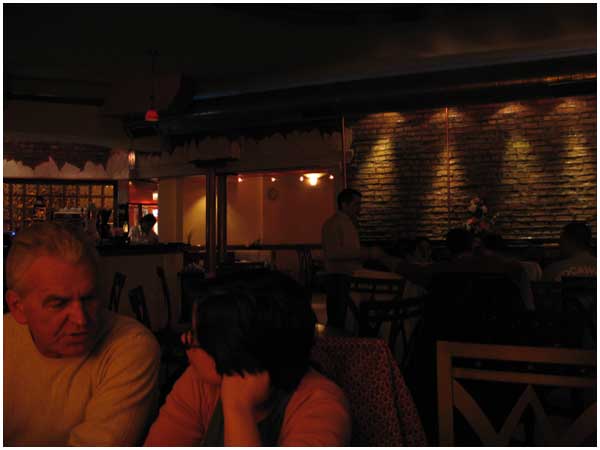 View of the interior, evening. 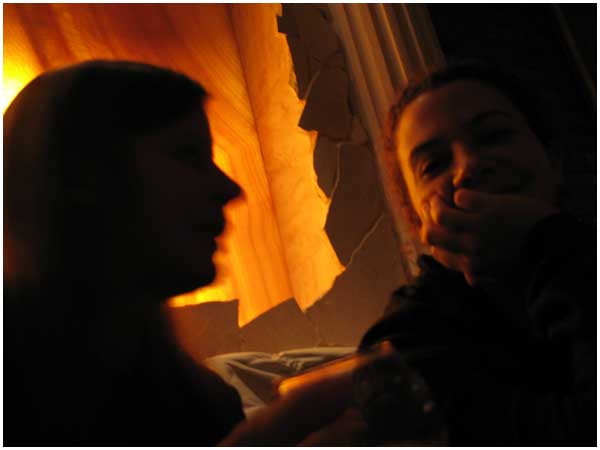 A bit after this, Gretchen got a bit woozy. She really hadn’t had all that terribly much to eat (but a lot of Tuica), and so we all ended up leaving before our dinner arrived. After packing everything up to take with us… we realized we were somewhat out of the way, and needed to find a cab back to my place.

In an amazing gesture of generosity, the owner offered to give us a lift. He mentioned this earlier in the evening as well. When he found out we had taken a cab, he insisted on giving us a lift home.

Seriously – he was nice beyond belief. He talked of how Americans tended to react to such acts with suspicion… and while it’s true that I was unsure why he was so generous, I quickly let go of any worry. He was just a genuinely nice guy.

After giving us all a lift back to my place, I tried to offer him some money for his trouble. Of course, he didn’t accept at all. When I asked if he was sure, he simply said to tell my friends to stop in to his restaurant sometime. :)

Back home at my place, Gretchen conked out and went to sleep… and the rest of us plopped down on the couch, eating our dinners and watching a bit of TV. All in all, we spent the entire day in a restaurant. And you know what?

It was fucking awesome.

Earlier in the day – I was in my worried host mode, wanting to make sure Gretchen and Abby were enjoying their visit to Chicago. Towards the middle of the afternoon, after we settled back into our meal and our conversations… I stopped being as worried. I let go, and decided that whatever happened would happen, and switched my focus from worrying to enjoying the present.

More than anything, the arc of the day mirrored my own internal moods. I know it sounds crazy to have spent a full day in a restaurant, but man – it was super fun. For about eight hours, I slowly let go of all my stress and worry about being a good host. I’m not sure if I’m doing this day justice with my post, but let me tell you – this day was really quite spectacular.