Today, outside of the Mart, there was a big WLUP promotion featuring Mario Wallenda and his “Skycycle.” A thin wire was stretched across the Chicago River (via two cranes), and a big crowd had gathered to see the spectacle.

For the backstory to this, check out the press release I posted, a few days back. 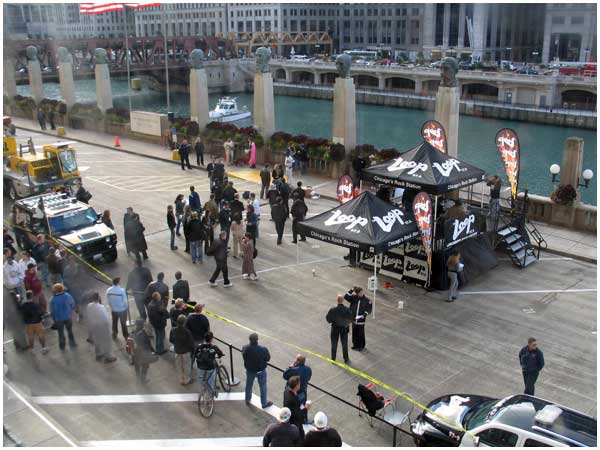 This is the view from our office window. A bunch of folks were already at the windows, peering out. I dropped off my stuff, grabbed my camera, and headed downstairs. 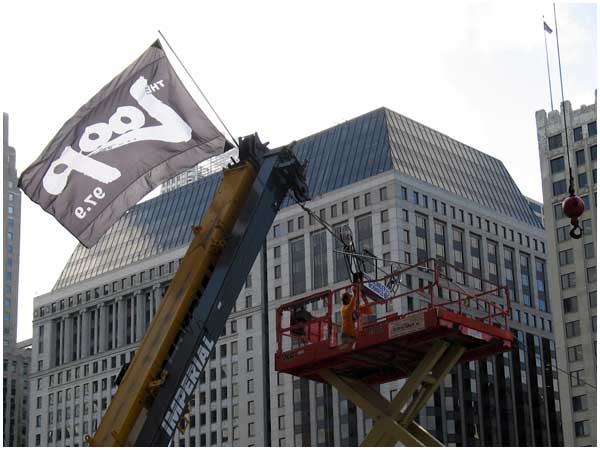 With my trusty media pass, I was able to sneak under the roped off area and roam around behind the scenes. 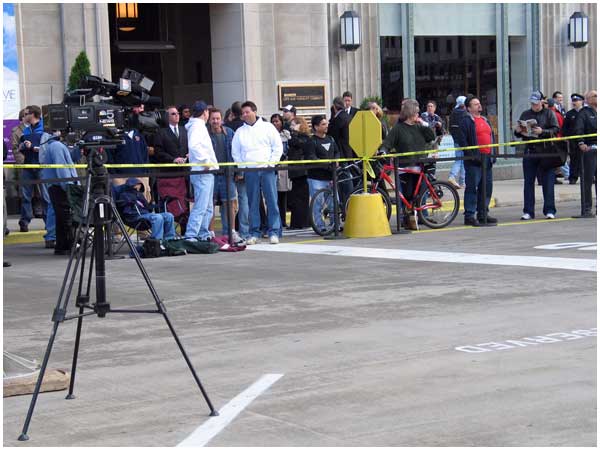 A good number of media folks were here, cameras and all. 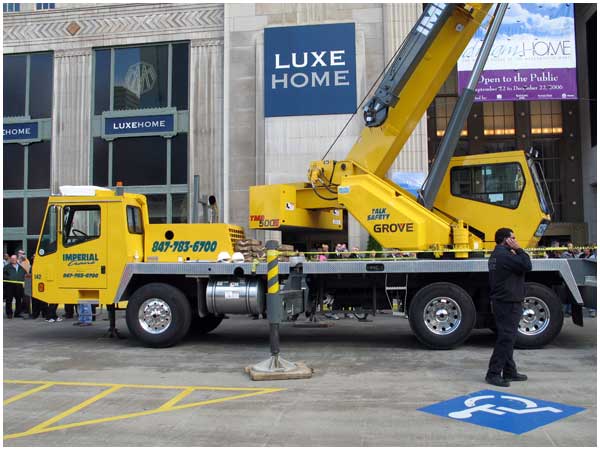 One of the three cranes at the event (two were used to suspend the wire, this one was used to raise Wallenda up to the platform). 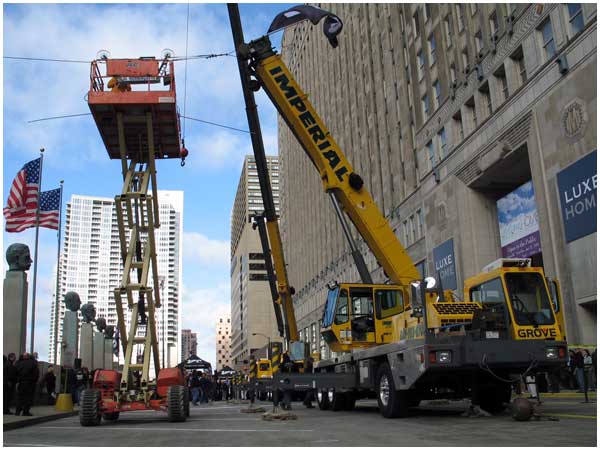 For a little perspective, this is the view of both the platform and the crane. 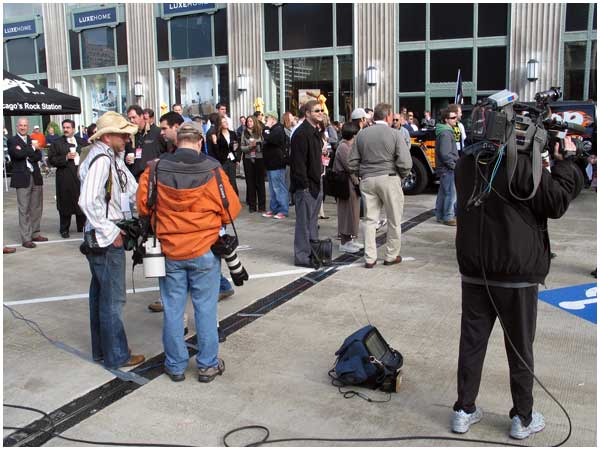 Being behind the scenes was pretty fun, particularly since all these super photojournalist types were around with their ginormous cameras. And then there was me, with my digital camera, weaving in and out getting shots in between them. 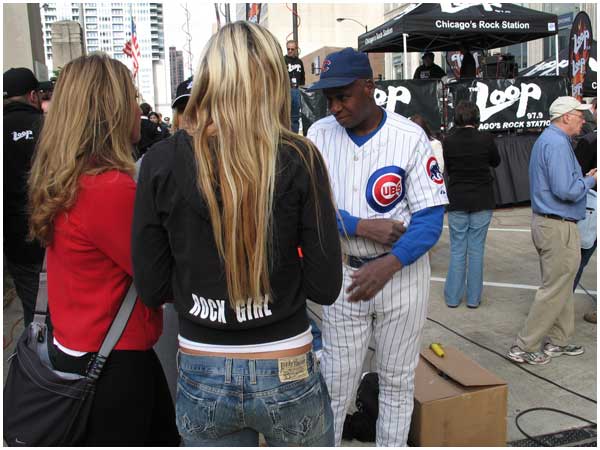 A few of the WLUP ladies, talking with Ronnie Woo Woo, who spontaneously appeared and then proceeded to insert himself into every aspect of the promotion. 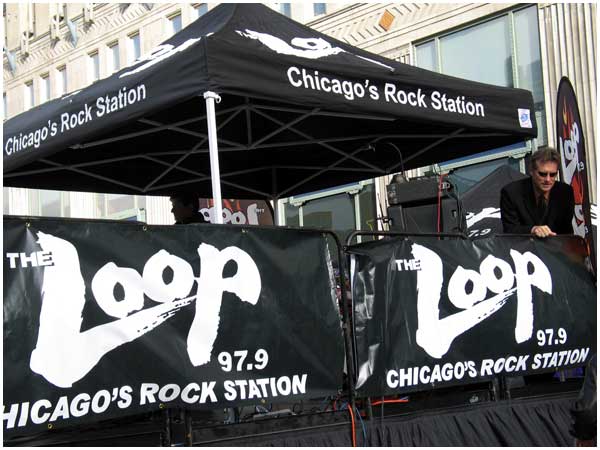 The entire event was being broadcast live on WLUP, on Brandmeier’s show. That’s General Manager Marv Nyren, leaning out from the soundbooth.

Lots of folks, lining up along the Frankling Street bridge, as well as a few naval onlookers. 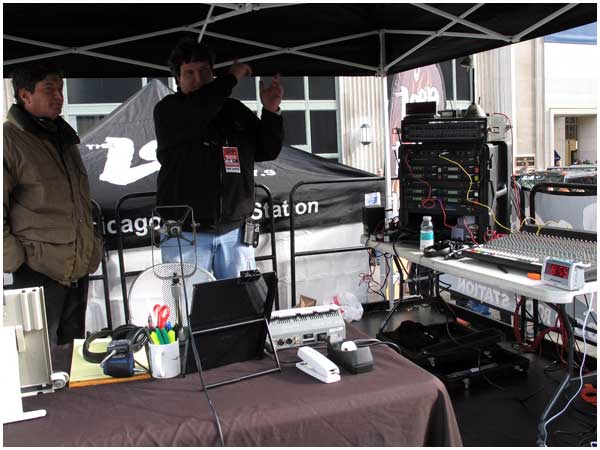 I got to step up onto the studio platform, and snapped a quick pick of the rig. Patrick Berger, station engineer is on the right, next to Bruce Wolf.

The chair that Mario Wallenda will be sitting in, which will then go onto the skycycle.

I noticed this guy standing on top of the crane truck (in the photo, on the left). I went by, asked if I could step up to take a quick photo. After talking with the kid for a bit, I asked him who he was working for. He smiled and said “My dad.”

I was confused for a second, and thought that maybe the kid was Wallenda’s son or something. But turns out he was the son of one of the crane owners/operators. I ended up talking to his dad, and got his permission to stay up there on the side of the truck, looking down a bit onto the crowd.

The dad came by a bit later, gave me his card, and asked if I could get him a free plug. While I did say that I worked at the radio station, I told him I didn’t do anything on air. But, I promised to do what I could. And so – here’s the plug:

The guy who was incredibly nice to me, and who allowed me to stay up on the crane was Al Collingbourne. He’s the Branch Manager of Imperial Northwest Crane Services, Inc. Thanks to him (and his son), I was able to get a few cool crowd shots, high above where all the other media folks were. 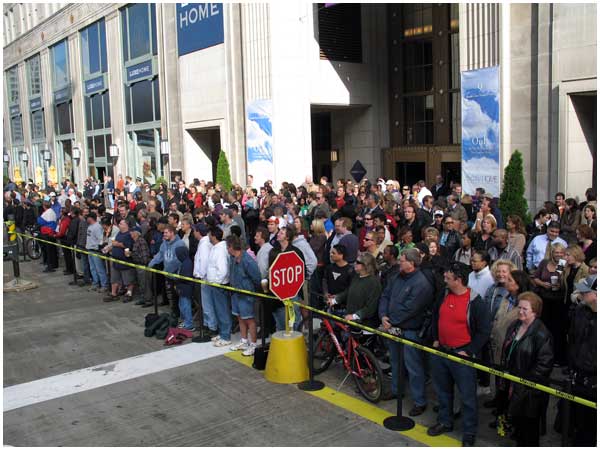 I’m not sure why, but I found myself drawn to taking photos of the crowd. I guess it’s the image of seeing so many people all sort of doing the same thing at the same time. By the time the event started up, there was a sizeable gathering in front of the Mart. 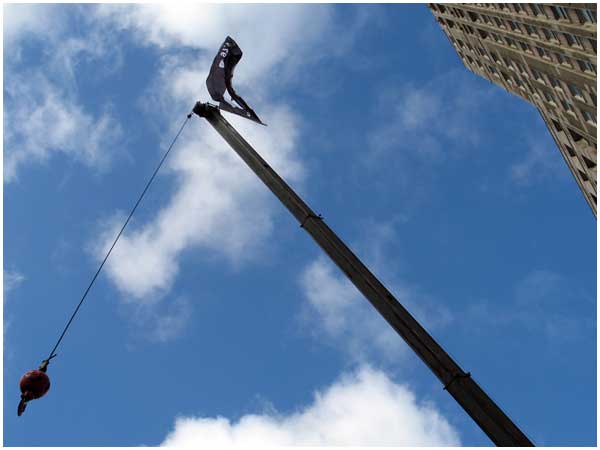 A peek at the “skycycle,” which the chair will be connected to. 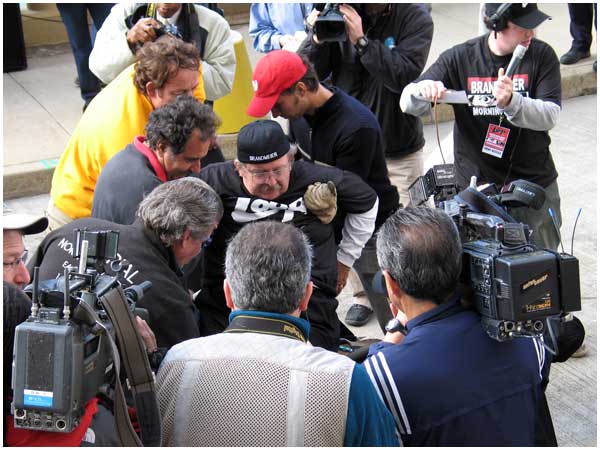 Wallenda makes his way out, and his assistants help him from the wheelchair into the skycycle chair. 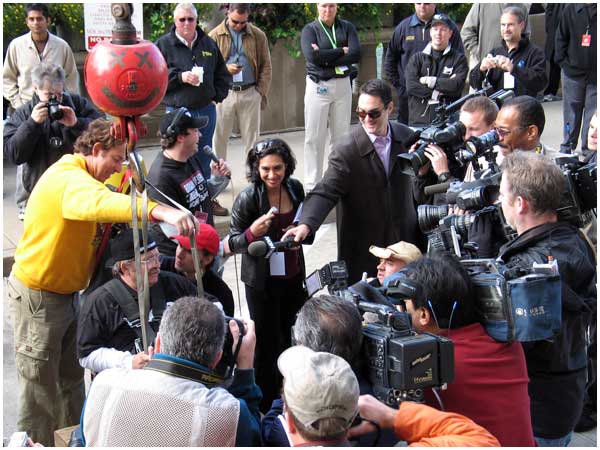 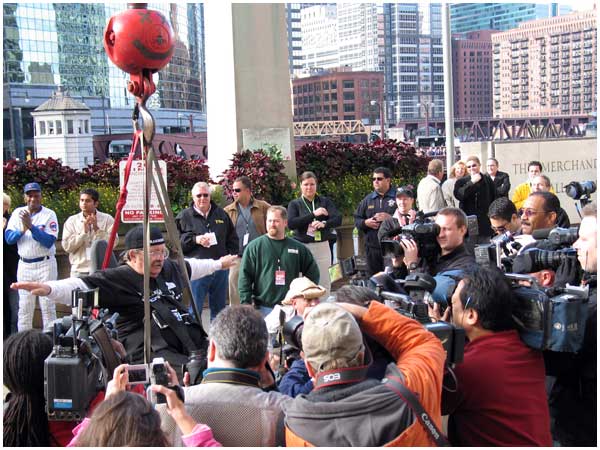 Wallenda, showing the crowd how he balances. 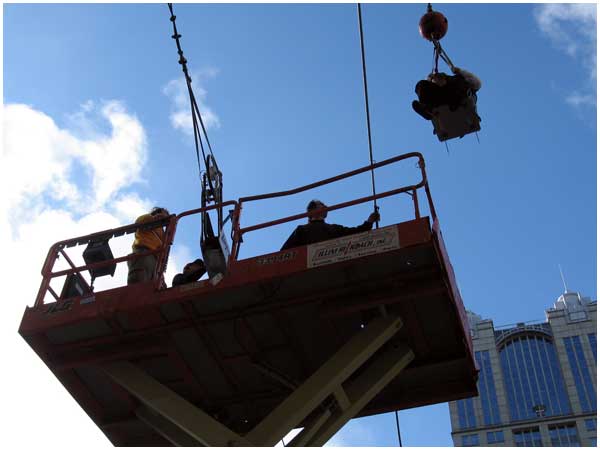 Being raised onto the platform. From where I was standing, I was literally ON the crane that was holding up one end of the wire. 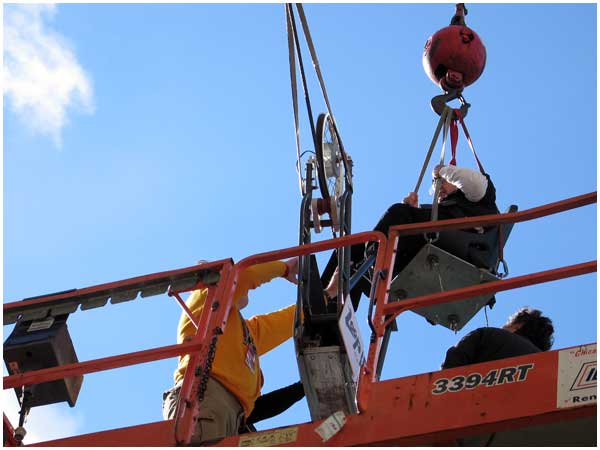 Wallenda’s assistants, helping him into the skycycle. 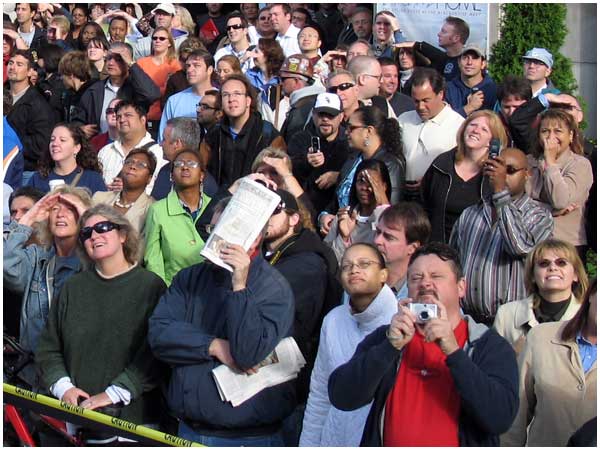 More crowd shots. This time, I couldn’t help zoom in on that guy who was trying to block his face. Everytime I looked over, he covered up whenever my camera got near. Maybe he called in sick to work or something. 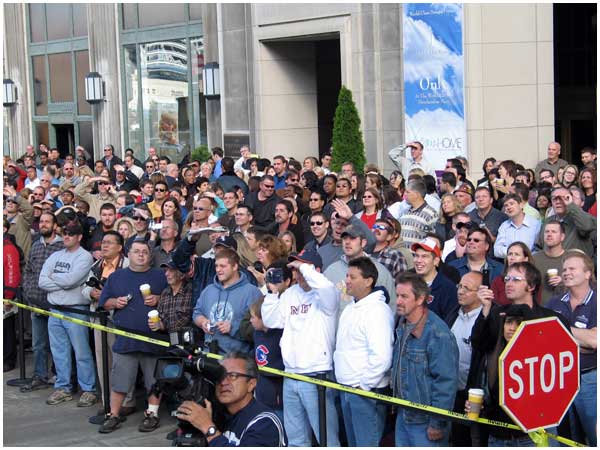 Everyone waiting for the event to kick off. 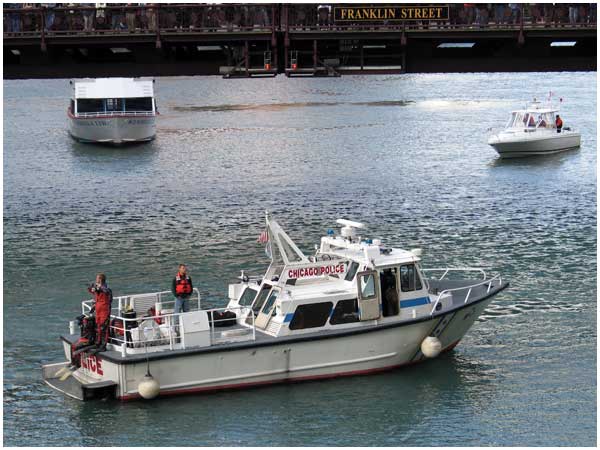 The Chicago Police were on call, along with a diver. 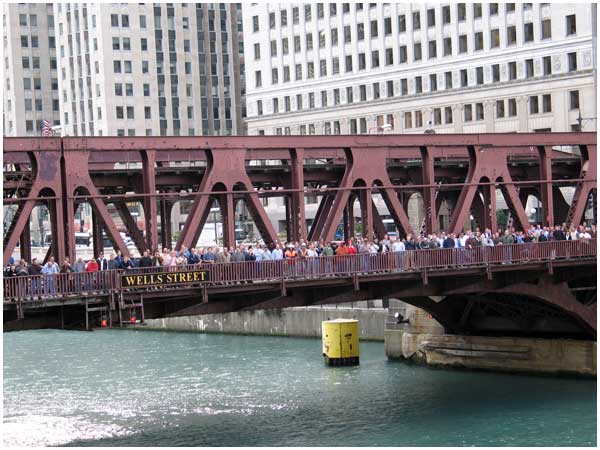 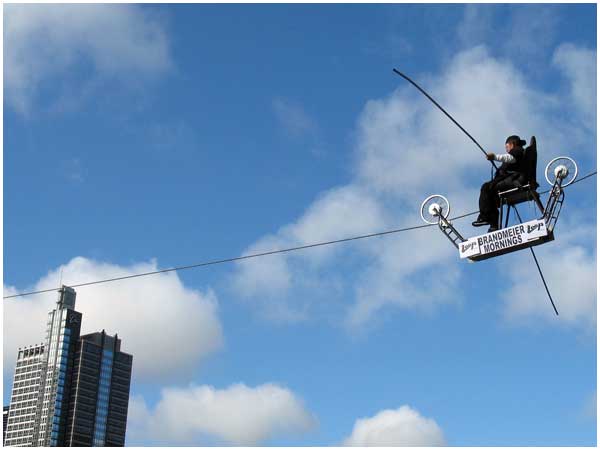 Wallenda, on his way across. 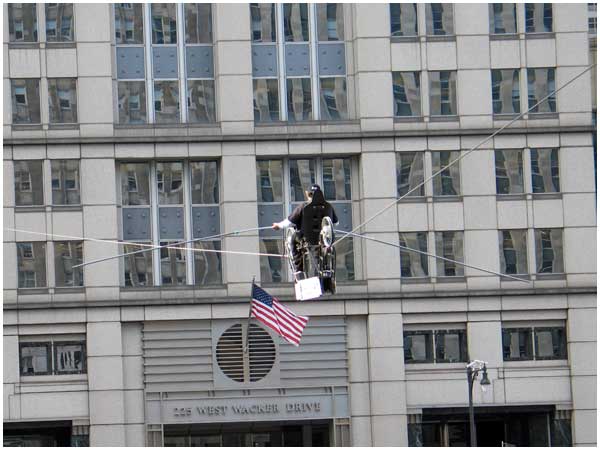 At the
halfway mark. I think he raised his balancing stick a few times. 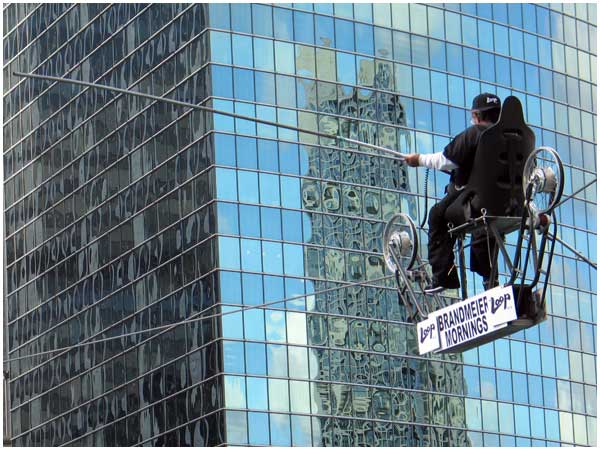 This is him, going backwards towards the platform, on the way back. 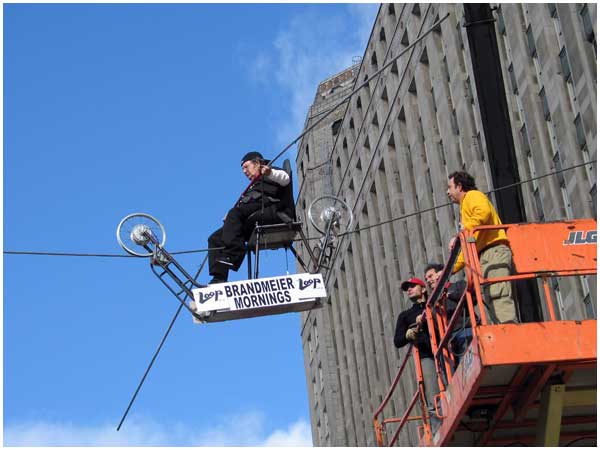 The entire event was pretty quick – over and back in under five minutes. The thing of it was, as soon as he started… it seemed like he was just taking a stroll in the park. Looking at the skycycle (along with the counterweights on the bottom), it doesn’t seem like there’s much chance of him falling.

Perhaps he’s just that good. But from the crowd reaction (and how others described it), the event was a bit anti-climatic. Watching Wallenda go across the river, it looked less like a tight-rope stunt and more like a carnival ride.

Granted, I’m not saying I want to go 100 feet up and do this. It’s just that at the end of the day, the whole death-defying angle that got played up in the media fell a little flat. 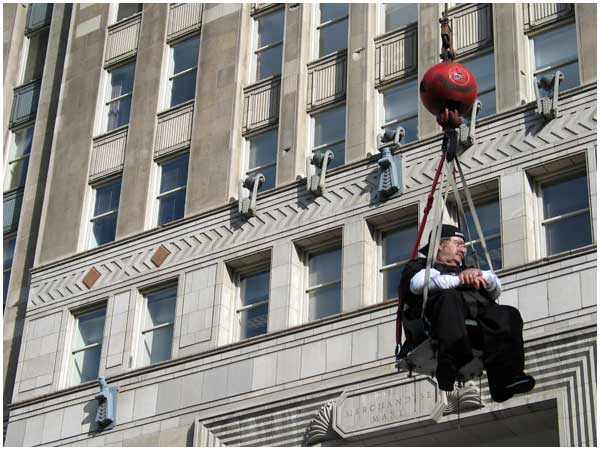 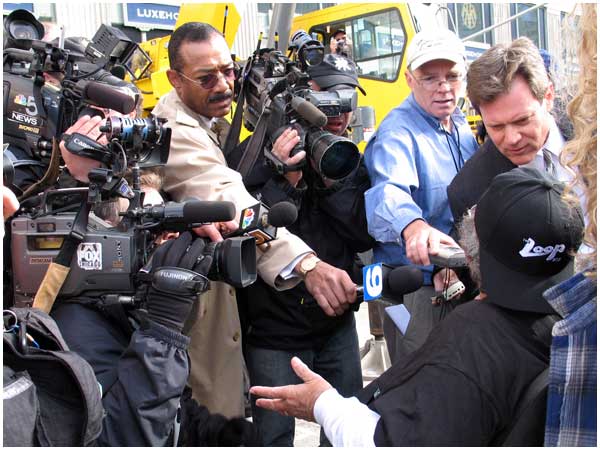 After getting back down to the ground, he was immediately swarmed by the press. 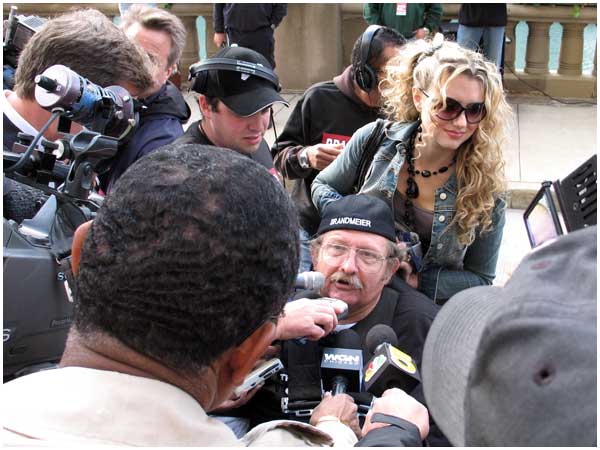 I got a few shots from a distance, and then decided to try to push my way into the cluster. 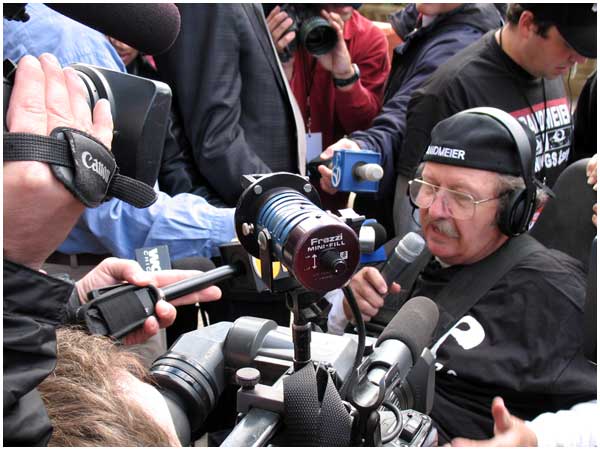 Heh. The last time I pushed my way into a throng of reporters was also at the Mart, about about two years ago.

All in all, it was a pretty great spectacle. As a promotion, I thought the station did a great job and a ton of folks knew about the event and showed up to watch it all take place. I was running late this morning, and ended up grabbing a cab in to work. Even my cab driver had heard about it.

Spectacle is really the best word for today. It’s been a long while since all of us (my coworkers and I) have gotten this worked up over any kind of promotion – and we were all interested and excited to see what today would bring.

And, despite the lack of danger, this was a fun way to start off the morning. As my coworker Matt is fond of saying: this sort of thing doesn’t happen if you work at an Insurance Company.