Tonight, Liz and I went out for a change. We roamed around my neck of the woods for a bit, ate dinner at Papajin, and headed over to Marshall’s – where Bryan was doing a live-painting thing. 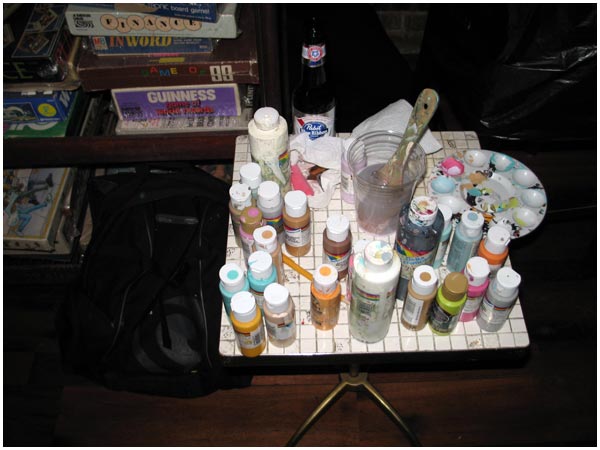 When we arrived, we ran into two of Liz’s friends (Dino and Lindey). As we walked in we saw Bryan, who had just started to set up his supplies.

Looking around for a table, we happened to come across Shirley – sitting at her favorite spot. We head over, set our stuff down and chat for a bit. Both of us were surprised to see her (last we heard, she had moved somewhere outside of Chicago, working as a nanny). 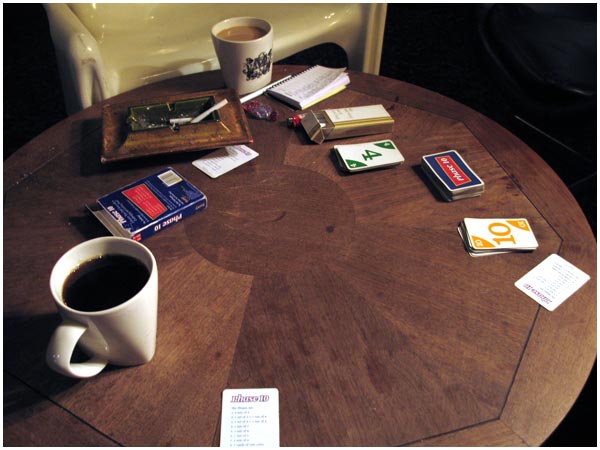 Next thing you know, Shirley breaks out her deck of Phase 10 cards, we order a few coffees… and we’re off to the races.

Shirley’s had a run of bad luck lately. I guess things went sour at the place where she was babysitting. There was a dispute with the mother of the family, who then ended up calling the police on Shirley. While she was away, I guess the woman took all of Shirley’s furniture and belongings (including her prized set of pool cues).

Sucks that she’s down on her luck lately, but you wouldn’t know it too much from the way she carries herself. She talked about these events as though they were minor annoyances, almost as though they were givens in a life fraught with bad breaks. From what I gathered, she’s looking for ways to get her stuff back, and has returned to Chicago for the time being.

It’s been a long time since I’ve last been in this place. And it’s markedly more crowded than I recall. Used to be you could walk in here most nights (even Fridays and Saturdays), and have no problems finding a table. It seemed almost like a secret place, for a while. Now though, I think the word’s out as things were getting pretty packed, over the course of the evening.

I should mention too that it’s almost been a year since I first laid eyes on Liz. In fact, we “met” one another here, by chance. I happened to be in Marshall’s with Justin at the time; we happened to see Will, who happened to be hanging out with Shirley; the two of them happend to know Liz (who was reading a book, nearby).

After we left, I mentioned that I thought she was cute. Word got around thanks to Will and Shirley, and next thing you know… we’re on our first date. Blink a few times, and it’s now almost a year later. 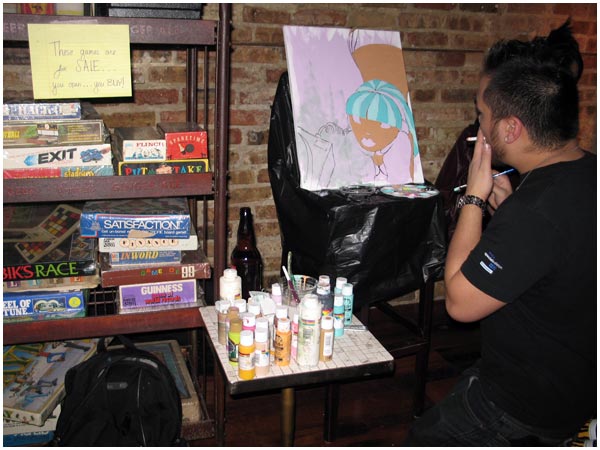 Liz and I ended up leaving long before Marshalls closed, but I got a quick shot of Bryan mid-work. When talking with him earlier in the evening, he didn’t think that he’d actually finish this piece tonight (he had planned on getting close, and then doing some final touches when he got back home).

The whole night, I think he had a lot of folks stopping by (he was also friends with the DJ who was spinning).

Oh! And I found out that Bryan just got a call recently, from a gallery in San Antonio. Random, out of the blue call – guy had seen his work, and wanted him to do a solo show. How awesome is that shit?

To check out more of his work, check out Bryan’s site.