Seeing a Side of Me I’ve Never Seen Before: Visiting the Ear/Nose/Throat Doc, Northwestern

A while back, I had a Sleep Study done at Northwestern. Liz was worried that I might have Sleep Apnea, and so I went in to get all hooked up on eletrodes and whatnot, to have folks monitor me while I snoozed.

Well, it turns out that I do, indeed, have Sleep Apnea. That’s the thing where, during the night, you stop breathing momentarily. Here’s how it was explained to me.

When you sleep, your mind shuts down your body. Paralyzes it, you might say. This prevents you from re-enacting, physically, the dreams you’re having. People who sleepwalk are physically re-enacting their dreams.

For folks with Sleep Apnea, the muscles in their throat (along with any number of other factors) relax during deep sleep, and constrict their airways. This causes oxygen levels to drop in the body and, once the mind senses this… the brain forces the body to “wake up” enough to catch a quick breath.

Over the course of a night, people with Sleep Apnea never really get into that fully restful state of sleep. They’re constantly waking up and falling asleep, over and over again. Oftentimes, they don’t even know it’s happening because they’re unconscious throughout the night.

I went in today to see an Ear/Nose/Throat doctor, to see what my options were. While I found out that I have Sleep Apnea, I was looking for a way to curb my snoring (which is quite loud). 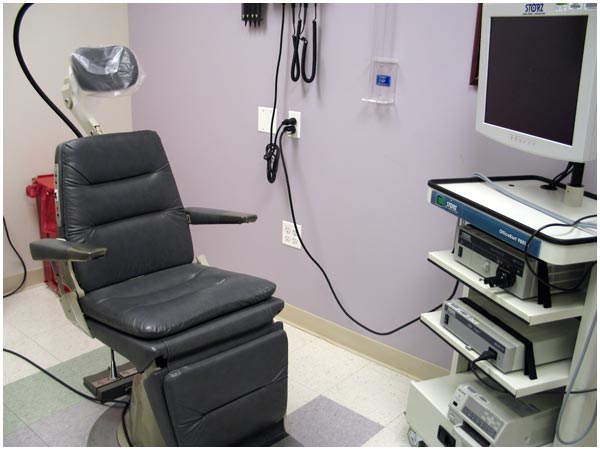 This is a quick shot of the chair where I was sitting. See that fancy setup on the right? With the monitor? Yeah. Remember that.

I met up with a Dr. Chang, who was a “Fellow” who worked under Dr. Kern (my actual ENT doc). He was incredibly friendly, and very patient with me as he talked me through a lot of terms and descriptions. On reviewing the data from my sleep study with me, here’s what I found out: That night, I woke up a total of 179 times, througout the course of the evening. On average, that had me waking up 40 times per hour.

I didn’t really hit me then, how high a number that is. Dr. Chang said “Well, if you consider that there are 60 minutes in an hour…”

Yeesh. It turns out, I may not be getting much sleep at all. And may not have been, for… well, years. Decades, possibly.

So. Before proceeding, Dr. Chang told me that he needed to take a look around. I figured it would be mostly tongue depressors and me having to say “Ahhh” a lot.

Dr. Chang handed me a bunch of tissue, and had me hold it up to my mouth. He then attached some kind of bottled anesthetic to an air gun thingy, and shot a lot of this liquid up my nose. Both nostrils, in fact.

He said that it was a local anesthetic, and would help make the procedure more comfortable. What procedure, you ask? Well, I asked the same thing. Turns out the anesthetic makes it easier TO SLIDE ONE OF THOSE TUBE CAMERAS INTO MY NOSE AND DOWN MY THROAT. 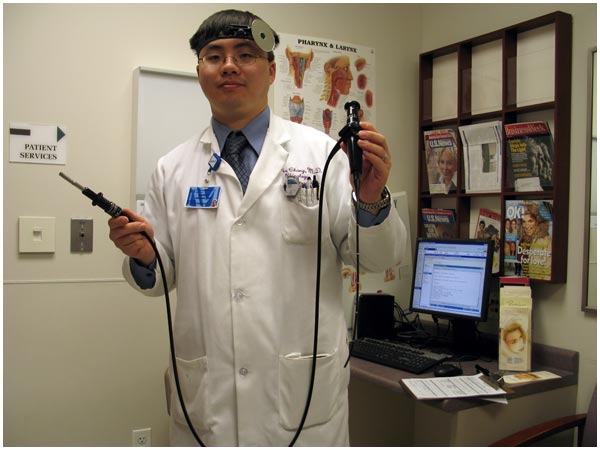 I’m certain I had some kind of horrified look on my face, because soon after that Dr. Chang said: “It really doesn’t hurt if the procedure’s done right.”

There was a slight pause while he looked at me. 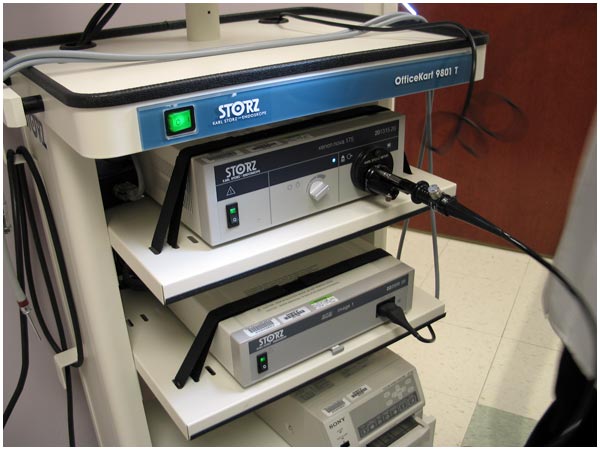 And here’s the camera, plugged in to the nearby machines and monitor.

During the process, Dr. Chang was (surprisingly) cool with me photographing and recording everything. He even let me take out my camera and record everything that was showing up on the monitor.

I have to warn you: the video below is pretty gross. It’s uh… the inside of my nose, and it gets pretty grody in there. While this was happening, I had my eyes closed for most of it. I couldn’t even watch. I just sort of pressed record, and held the camera.

I get squeamish at this sort of thing. Whenever they show surgeries on TV or anything like that, I always have to turn away. This video, even though it’s of me, is no exception.

So… press “play” if you want. But you stand warned.

After the procedure (everything looked in order, and I seemed to be in fair shape), Dr. Chang explained to me the various surgical options I had:

First, I could have a basic surgery that took out my tonsils and removed the uvula. Not a huge procedure, and it would likely reduce my snoring. This procedure has a 50/50 change of cutting down my sleep apnea.

Second, I could have a more involved procedure where they chisel out a piece of bone from my jaw… and re-attach it near my chin. They then do some kind of weird thing that stretches my tongue forward more, increasing the amount of space in my throat.

The final option (which sounded totally extreme) was for them to break my jawbone, and move everything forward a few centimeters. This would cause me to have a bit of an underbite, and the only way to “correct” this is to then also break the upper part of my jaw/face, pulling it the same amount forward.

In my head, the types of surgical options available were fairly basic. Cosmetic, even. Hearing these choices… Jebus. Craziness.

The easiest option? I’d get a CPAP machine that would help me breathe at night. The downfall is that it would be me wearing a sort of mask to bed, while air would be constantly forced into my nose and mouth. The upside is… I guess I’d finally get a good night’s sleep, as a result.

For now, I’m going the CPAP route. I’m kind of excited by it, actually, The notion that I haven’t been getting actual real sleep, coupled with the notion that I will get actual, real sleep… it’s exciting. Part of me secretly hopes that, once I start using this machine, I’ll magically get a ton of energy, where before there was lethargy.

// Edit: After that spray/anesthetic wore off, my sinuses started feeling terrible. A constant burning sensation, kind of like when you have a really bad cold. Imagine that, but make the pain just a little sharper. That’s what it felt like, for an hour or so after walking out of the office.

Also, the rest of the evening, I’ve been sneezing almost nonstop. Ugh.