Harmony Gets a New Home

Today’s the official day, of me taking Harmony off to her new home. I took the day off work today, partly to spend some time with Harmony… and partly to get her to get her nails trimmed and a bath, over at the local PetSmart. 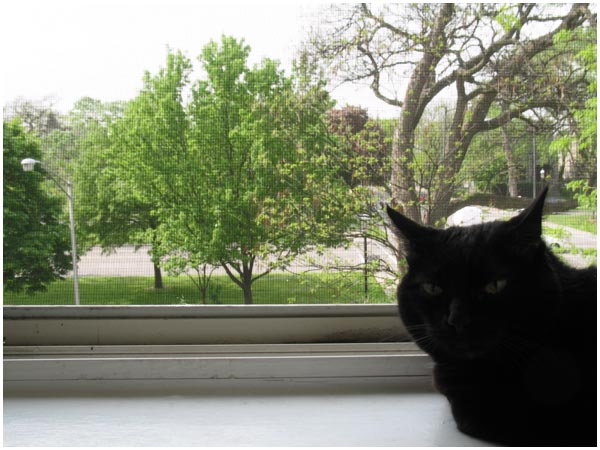 Here’s a pic I snapped of her, hanging out in the AM. She’s looking out onto Logan Boulevard, in my new neighborhood.

In hindsight, even though I thought it a nice thing to do… getting her groomed right before a big trip probably wasn’t such a great idea. She was pretty stressed out when we arrived at the pet store, and when I left her in their care… she was sitting in her carrying bag, on a table surrounded by 5 or 6 dogs.

Seeing her there amidst all that noise and confusion, and having to leave here was pretty heartwrenching. I think part of it too was that, though I was leaving her briefly to get groomed – I realized I would be leaving her, for good, in a mere few hours.

Walking around the store, it really started to hit me that I would be losing my cat. I was shopping around for a new water dish and a new litter box, food, all that sort of stuff. On looking around, at all the packaging and all the other people in the aisles, I started tearing up a bit.

Every product, every thing on sale was designed with making one’s pet happy and content. And me, there I was in the store, buying new things with the express intent of abandoning my cat – a cat who had shared my home for more than a decade.

I dunno. It was something to do with all the picture of other cats, on all the other products. And then me remembering the look on Harmony’s face, as I left her in that room full of barking dogs. Had I stuck around there, instead of moving on, I probably would have ended up crying, right there. I’m sure that would have been a sight to see – a long-haired Asian guy, weeping quietly next to the Tidy Cat and Tender Vittles.

Fast forward about an hour and a half later, and Liz, Harmony and I are all in the car. Harmony smells pretty great after her bath, and I’m surprised at how quiet she is, during the drive. Usually, she cries a lot when we travel (and she’s forced to stay in her carrier). But today, she was pretty quiet on the whole. I wonder if she wore herself out, while getting groomed.

All in all, the ride up to Madison was fairly uneventful. We hit a few rough patches of traffic, where the two-lane highway merged down into one for some inexplicable reason. We slid at about 10 mph for 5 or 6 miles, trying to merge down into one lane. This was particularly awful, since I couldn’t see any actual construction taking place either – it seemed like a random lane shutdown, for no reason. 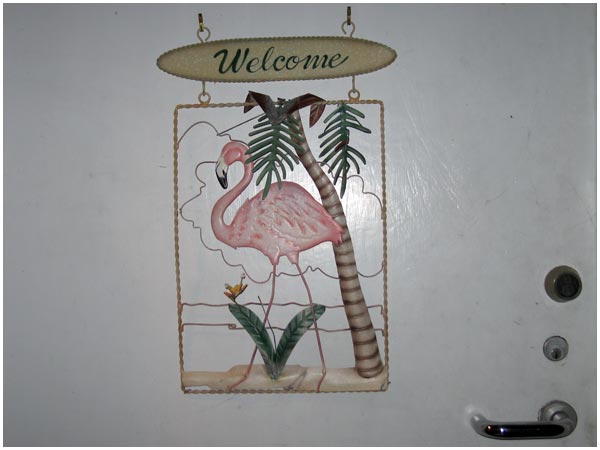 After a bit of a delay, we arrive at Jeff and Michele’s house, Harmony’s official new home. I took this photo later in the evening, but this is what we saw on the front door as we walked in.

However – let it be noted that, on pulling into the drive, Jeff and Michele both came right out to welcome us. I’ve hung out with both of them on several occasions, and being taken into their home was no different – I felt a great deal of warmth and kindness immediately, just standing there in the driveway, talking to them.

After making some introductions, we headed inside to let Harmony out to stretch her legs. We set up shop for her downstairs, and got the litterbox prepped. On gettig out of her carrier, she roamed around a bit, exploring the new space and getting comfortable. 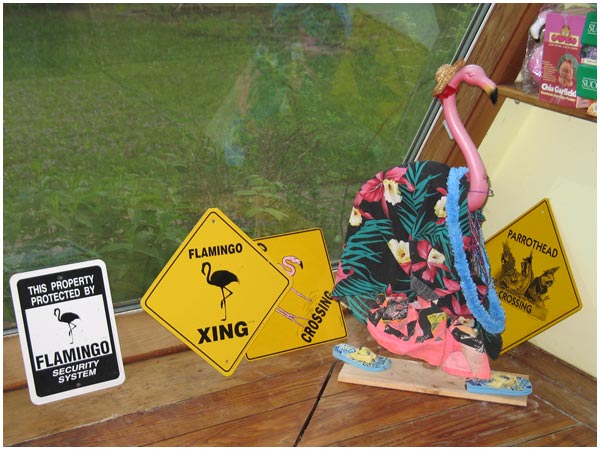 Here’s a quick shot I took of the nearby decorations. It shouldn’t surprise you that Jeff and Michele go by the online monikers “FlamingoJeff” and “Ms. F.” :)

As Harmony got settled, Jeff offered Liz and I beers. We cracked a few open, and got a nice tour of their home. 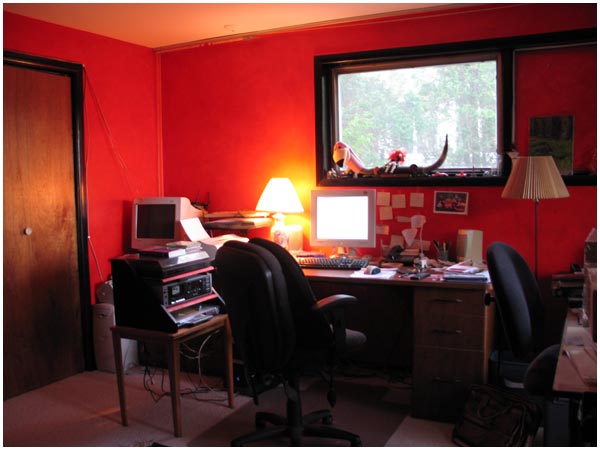 Here’s Jeff’s office, where he does most of his Internetting. Down the hall was Michele’s office, where she works with her fabrics. And in between the two, Jeff has a pretty sweet woodshop all set up, and looked like a fantastic place to do some work.

Jeff and Michele’s home is really quite nice (and reminds me a bit of a house I remember, from my childhood). They’ve got a ton of art on the walls, including several pieces by Jeff. The whole place is incredibly spacious and, of course, tons of books everywhere.

For most of the evening, the four of us hung out on the balcony outside, overlooking their yard. We chatted a while, and talked until the set went down. Of course, we talked a bit about our Imaginary Internet Friends, and how strange that must seem to some. We chatter about books and sci-fi, Madison and Chicago. We even talked some about diets, and Michele was kind enough to give the cookbook she had authored.

While we were out on the porch, Harmony mostly hid and lurked about, room to room. I ended up not taking too many pictures, tonight. Partly because I felt weird, going into Jeff and Michele’s home and taking a ton of photographs. And partly because, as much as I wanted to document Harmony’s final day… I just didn’t have too much energy for it. And, honestly, for most of the time she was hiding and running about, exploring around. 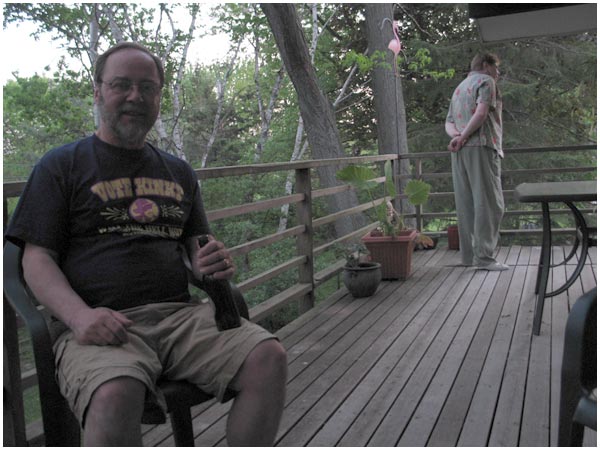 Here’s a quick pic of Jeff and Michele (who’s in the back, checking to see if Harmony is still on the balcony). I’m really quite excited by the fact that Harmony can one day become an outdoor cat again. And today, they left the screen door open and Harmony walked outside, for the first time in years!

Honestly, I was convinced she’d get to the ledge and just leap down to the yard, and run away. But she stayed calm, and dutifully roamed around the upper balcony, before running back inside.

When I first got Harmony, she was almost exclusively an outdoor kitty. We had three dogs in my house (as an undergrad), so she rarely stayed around inside except to eat and to hang out with me. I lived in a basement apartment, and she’d use my window as her doorway in and out of the house.

Since that time, she’s been mostly indoors… but deep down, I think she really wants to be an outdoor cat, once again. I see it when she hangs out by the windows, watching the birds nearby. I’m definitely excited for her,
and her new yard. 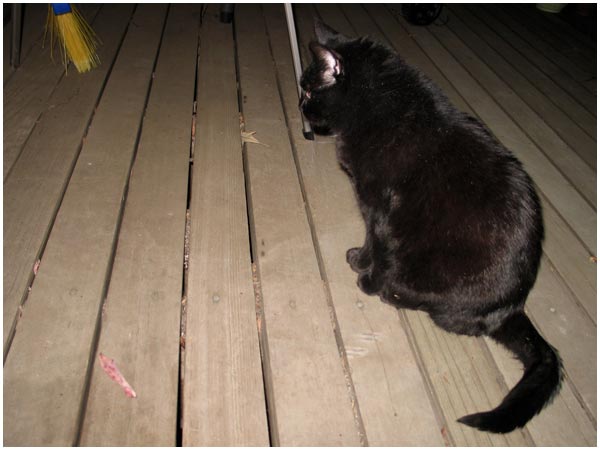 Here she is, facing down a June bug. And a bit of video too:

By the time we said our goodbyes, things were getting pretty late. Liz and I stayed until about 9:30 or 10, and left for Chicago (a 2.5 hour trip) around then.

Before I left, I got to spend some time with Harmony alone, and said my goodbyes. It was a sad bit of time, but weirdly? I wasn’t as sad as I thought I’d be. I was more affected by the ads I saw at the pet store, earlier in the day. And when Michele was telling us a bit about her cat (Morgaine), I remember getting a little misty just listening to that.

It wasn’t until a bit later, in the car on the way home, that things started to dawn on me. I remember being very quiet on the drive home, and thinking a lot. It felt weird to no longer have someone to look out for, to check in on every day. It felt strange, trying to grapple with this newfound sense of absence, an emptiness where, just a day or so before, hadn’t existed.

We got back to Chicago around midnight.

Jeff and Michele: I can’t thank you guys enough, or express how grateful I am for the home you’ve provided Harmony. I know that she’s in a good place, in good hands. I can’t imagine a better scenario, quiet honestly. I know she will be well cared for, and well loved. Thank you both, so much, for taking her into your home.

It’s been a few days now, and it still feels weird to me, Harmony being gone. Every day, at several points, I find myself thinking “I need to go home and make sure Harmony has food.” Or I worry she’s run out of water. I find myself realizing that it’s been a day since I’ve gone back to my apartment, and as I reach for my keys… I remember, I no longer have a need to.

As I’ve been writing out this entry, I’ve cried a few times. I still, occasionally, hear a sigh or a cough, and think it’s Harmony. I keep imagining the sound of her paws, padding across the wood floor.

It feels weird to me, still, her not being here. I suspect it will feel this way for a while. I still open doors quickly when entering or leaving the apartment, even though I no longer have to. It’s habit by now, and too well engrained in the muscles. I miss my cat.

« “We made brownies, and I think we’re dead…”
Happy (Surprise) Birthday, Chris! »