So here’s the backstory: Chris’ birthday was today, and Leslie called me up to help out with the “surprise” part. Someone (me) needed to occupy Chris for part of the afternoon (3:00 – 4:15), allowing Leslie and everyone else to sneak into their home and set up the party.

Earlier in the week, I tried asking Chris if he had time to take a look at my bike. It’s been sitting in a closet for a few years now, and I was hoping to dust it off and ride it around some. Sadly (and this is true), I know zero about how to take care of my bike… and wanted his eyes to see if I needed any serious repair work, or needed to take it in.

When I first asked if Chris had time this weekend, he said “This weekend’s pretty busy, how about Monday?”

Crap. So I waited.

The following day, I mentioned that I’d be busy with Liz all the following week packing, and was there any chance he could swing by on the weekend? He was busy with Mother’s Day stuff, and offered up Saturday. “Sweet,” I thought, “he picked the day himself.” But then Chris said to me “I’m pretty busy in the afternoon, how about around 11?”

After many calls with Leslie (who said to me “What’s he busy with? He’s got nothing.”), we determined that he was trying to keep his afternoon free to hang out with her. She made up some excuse needing to be out of the house that afternoon, and mentioned it to Chris in the evening.

The following day, I call and mention I’ll be busy in the morning on Saturday. Any chance we could do something around 3? Success! 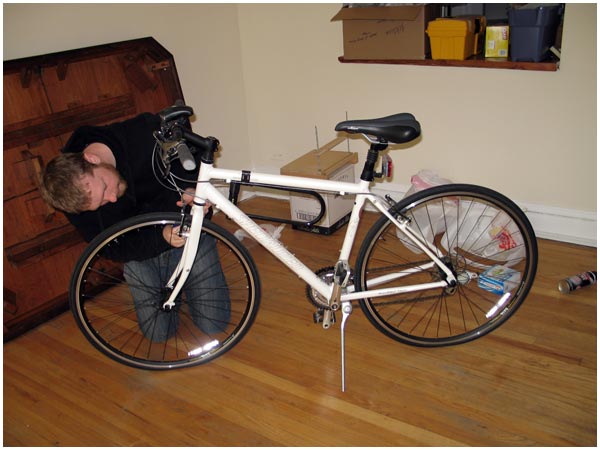 Here we are on Saturday, Chris giving my bike the onceover. As a nice sidenote – my bike is apparently in good condition, and needs little more than a dusting off to get back on the road.

We spent about 30-40 minutes at my apartment, before I started Phase 2 of the plan. In order for the next phase to work, I needed a plausible excuse to accompany Chris back to his house. So I mentioned not having gotten him a birthday gift yet, and insist (I required insisting) that we go to Best Buy. I force him into my car, and we drive to go pick up a copy of Guitar Hero 2.

I took Elston down, knowing that we’d get tied up in traffic for a while. But while we were at the store, I made the mistake of wanting to swing by the fancy flat-screen TV’s (this was another of my “reasons” for going to Best Buy – to look at the TV’s). There, Chris started talking to one of the sales reps, and began asking a ton of questions. He got so into it, we ended up running a bit late (Leslie called him, asking where he was).

On arriving back at his place, I was convinced he knew something was up. But apparently, that was just jitters. I hung back behind him as he opened his door – he was a bit off-balance, as he noticed the top lock was locked (unusual), and didn’t see his bikes in the front living room. On walking down the hallway, his initial thought was that he and Lelslie had gotten their bikes stolen. 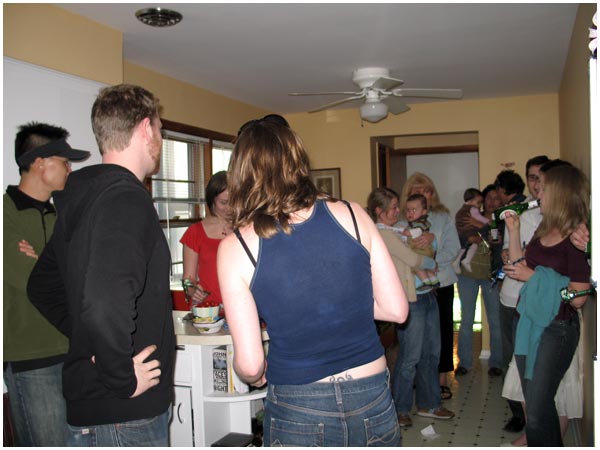 Everyone was hiding out in the kitchen, waiting. Sadly, I wasn’t able to get any video (I was tempted to break out the camera, but didn’t want to risk blowing my cover). Here’s a shot of everyone, shortly after people yelled out “SURPRISE!” 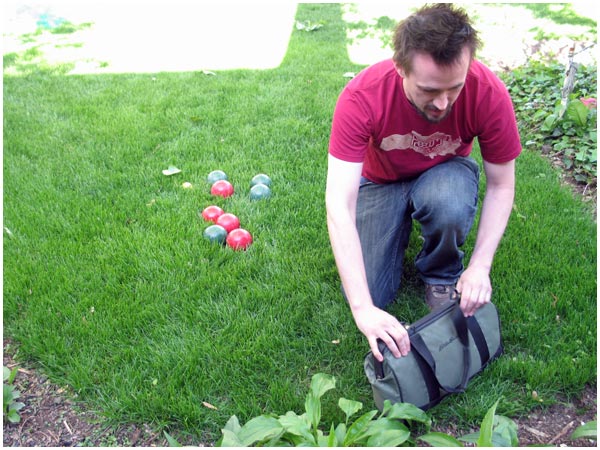 The rest of the party was a blast. Cooking out with burgers and brats, Ben brought along his Bocce ball set (which was a ton of fun to play). 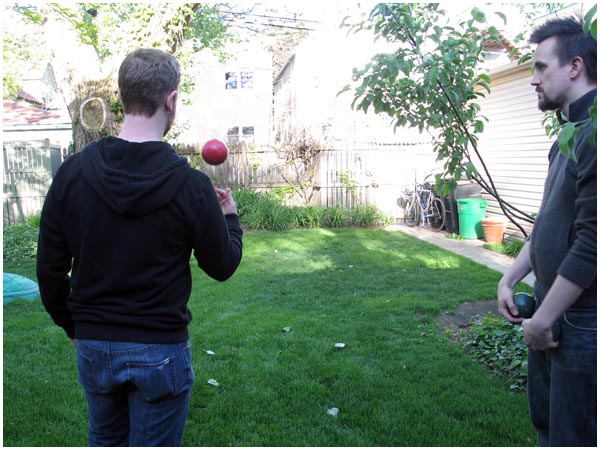 Chris, winding up. We played teams (me and Chris, Ben and Dave). At first, I thought that maybe Ben and Dave were just really good. On playing later with just me and Liz, I discovered that in fact… I was the weak link on our team, and that I am not good AT ALL.

I’m thinking we need to get a Bocce ball set, for the new apartment. I could use some practice. 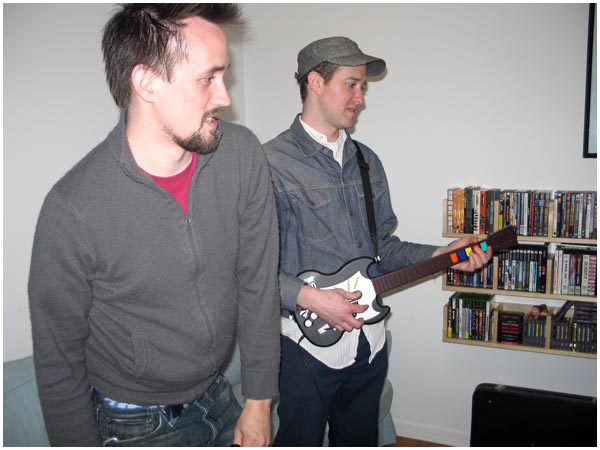 After a bit, folks are drawn to the game room to play a few rounds of Guitar Hero 2. 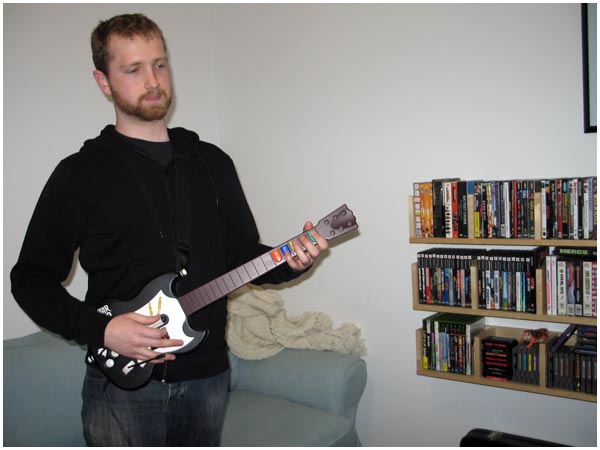 Chris, who’s already quite skilled with the Guitar Hero game. 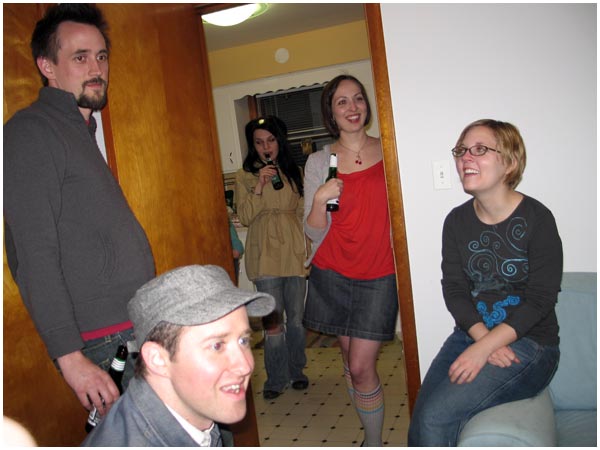 Dave sure does love his Spiderman. Hats off to Leslie, for recognizing that a party only gets better when you add a piñata to the mix. 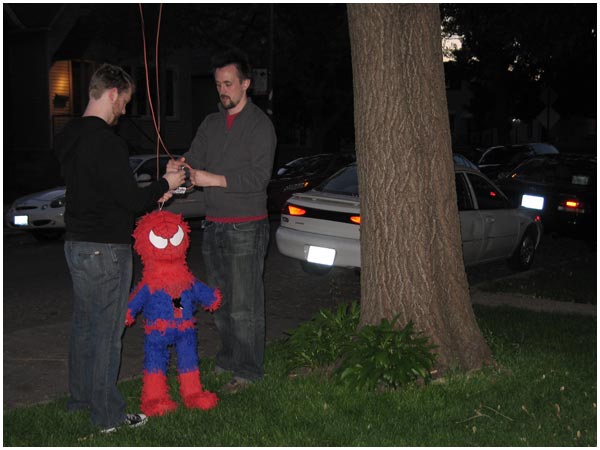 It took a few tries to find the right tree, and to get an extension cord wrapped around a branch. 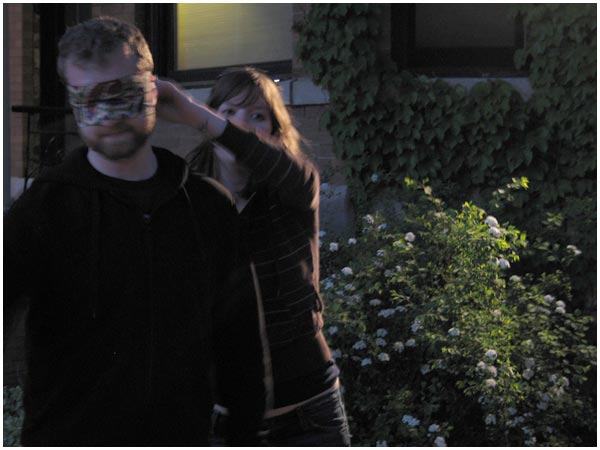 And away we go… 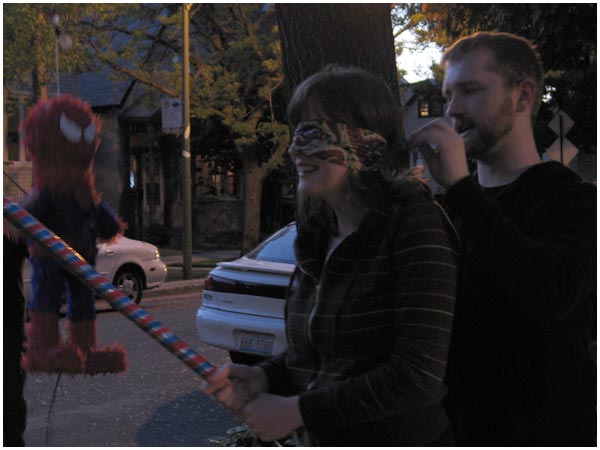 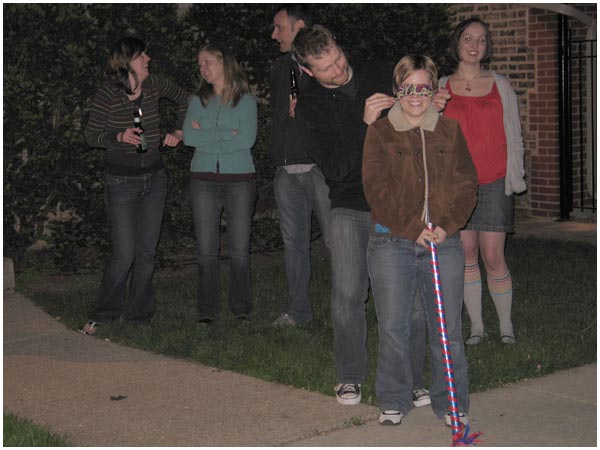 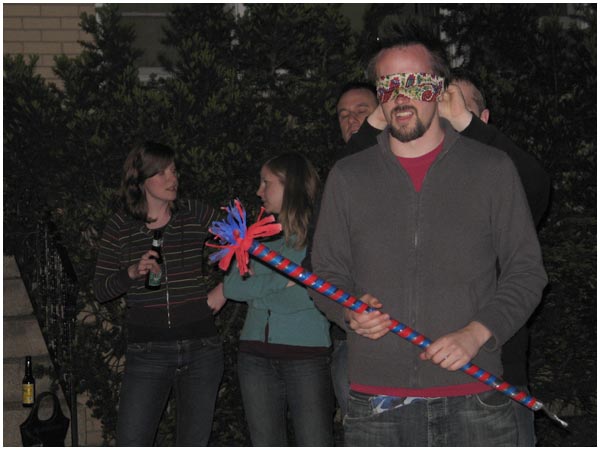 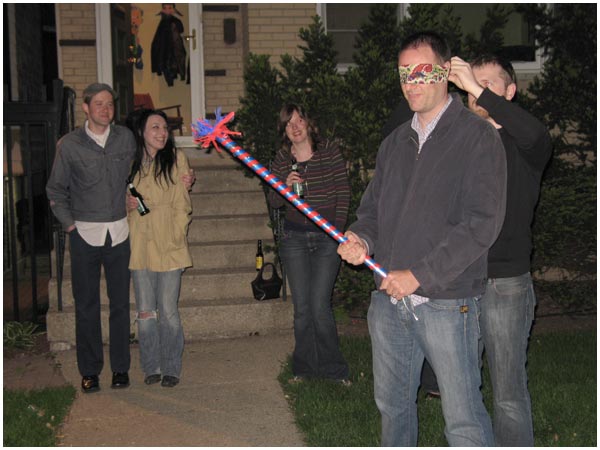 Todd, who I discovered also went to IU. And more than that, lived just a block away from me while we were in college. Todd was also the first one to actually spill out candy from his swing. 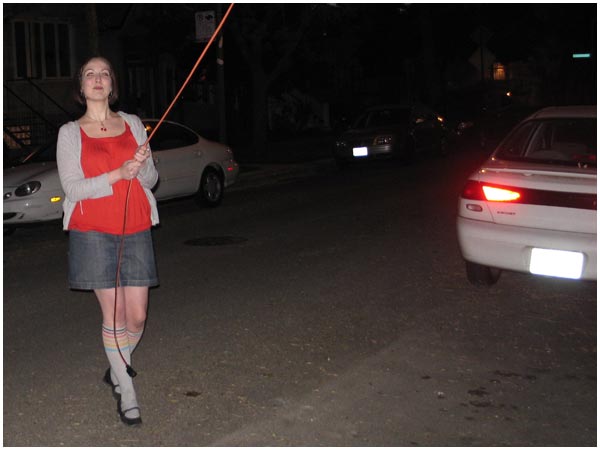 Allison, holding down the fort Spiderman. 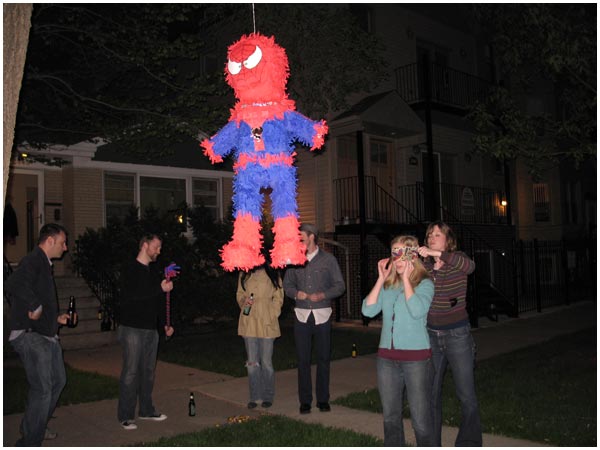 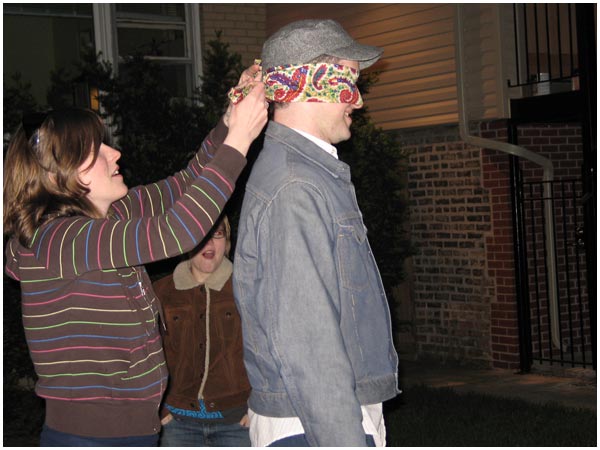 Allison, about to dispense some damage. 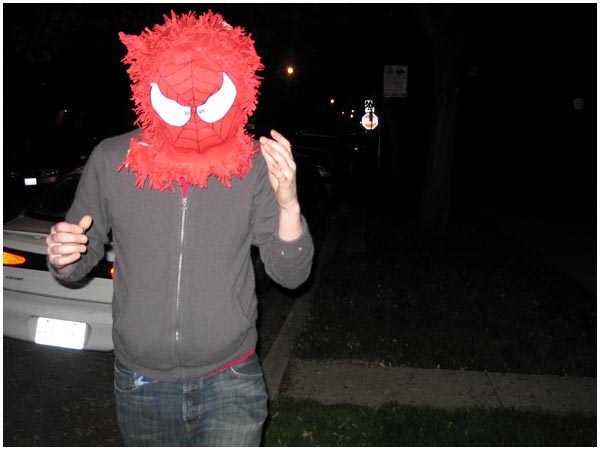 After the decapitation, Ben tries out the superhero thing by putting on Spidey’s head. 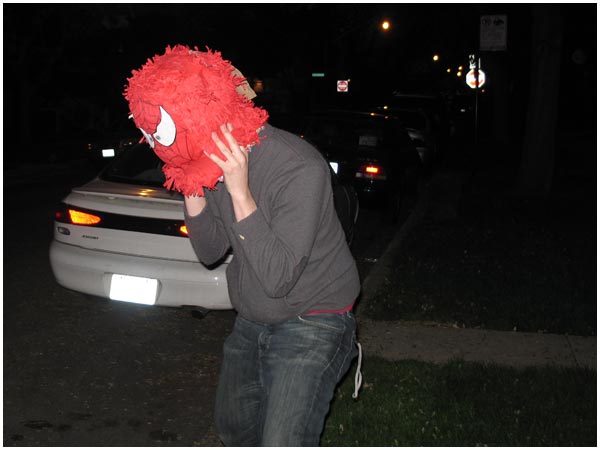 Around now is when he discovers that the manufacturers of piñata Spidey used staples to hold things together. I think he walked away with a few deep scratches as a result. Ouch! 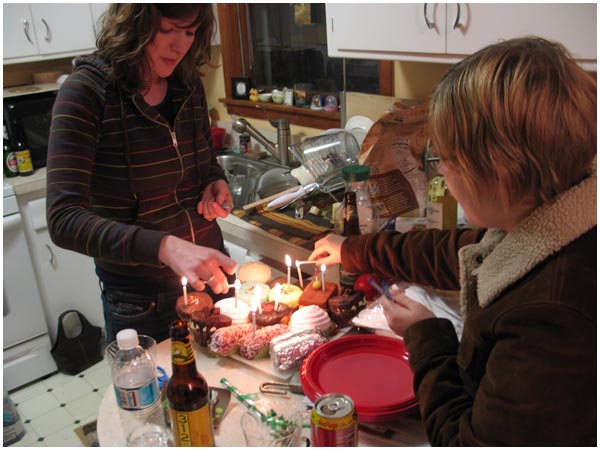 Leslie and Liz, adding candles to the delicious birthday desserts. 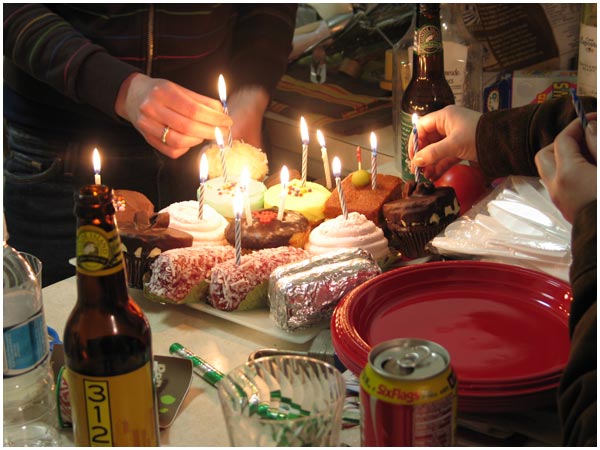 Closeup view of the sweets.