This year’s Renegade Craft Fair was a bit different from last year’s event. I’m used to going to Wicker Park, but this time around… all the booths were situated a few blocks south, on Division.

Due in part to the new opening of the Renegade Craft Store on the street, this year’s event combined with the “Do Division” festival. The two events looked like one, but in my head they were separate: the crappy side, and the good side. Not only could you tell by looking at the wares for sale, but you could almost tell simply by looking at the signage/logos. 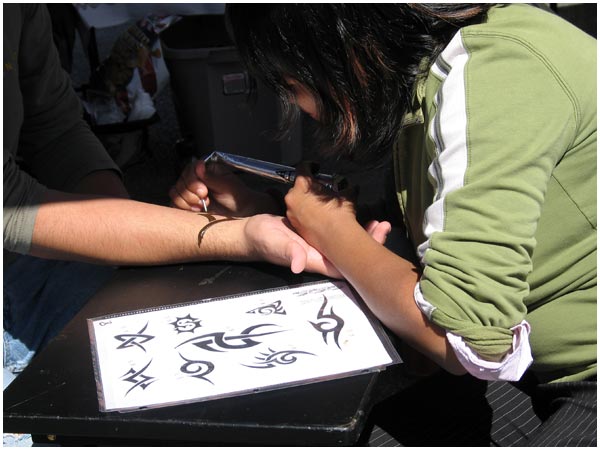 Not just for kids – even adults like to get painted at festivals. I was surprised to see an actual booth dedicated to Henna tattoos, but who am I to begrudge someone a little temporary ink? 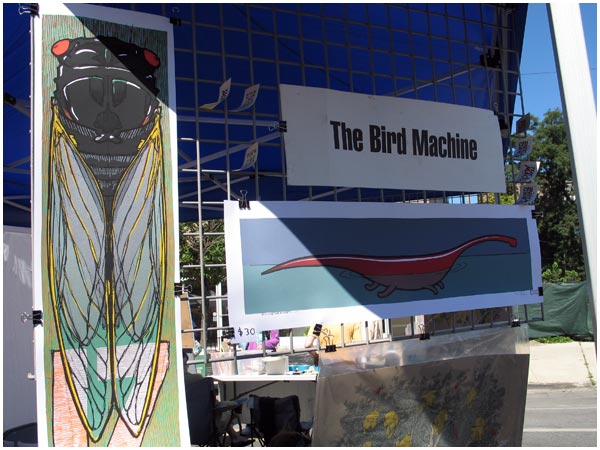 Lots of great posters from The Bird Machine. I was pretty tempted by the Nessie poster, but ended up not getting it. 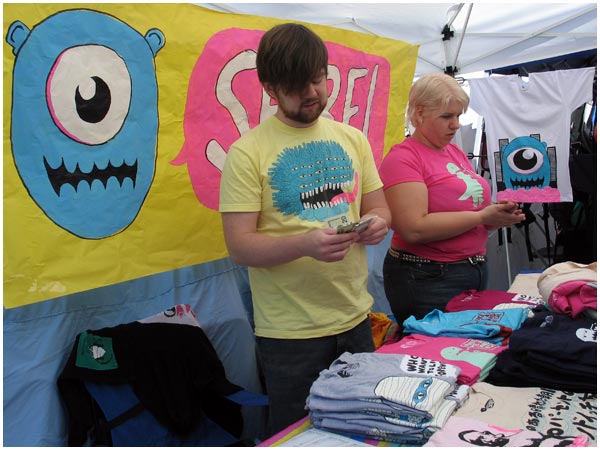 Liz picked up some fun shirts from Seibei. 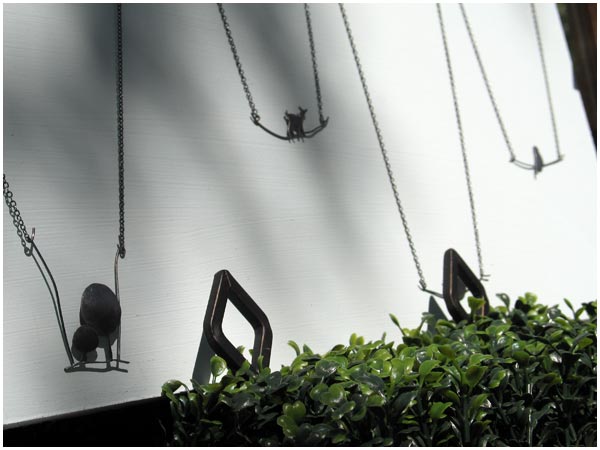 I thought these necklaces were rather cool. The designs were on a bit of a hinge, and “stood up” when resting against the skin. 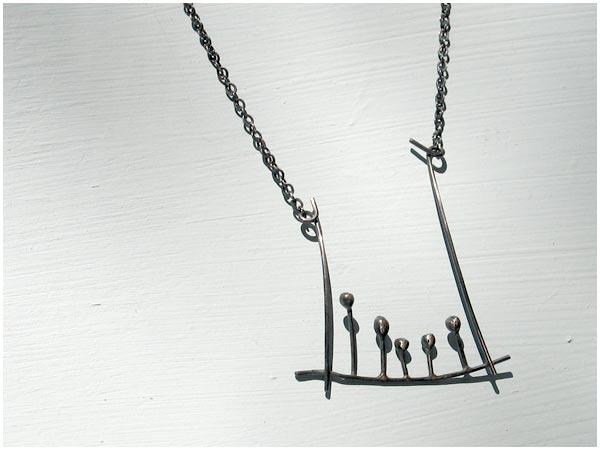 Necklaces by Figs and Ginger. 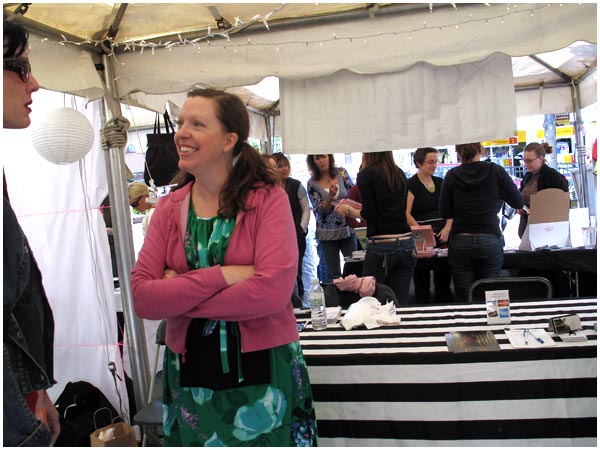 Lo and behold, who do I end up seeing but my friend Christine (representing Twospace). Dave and I were talking just last night, and wondered if we might see our friends Kent and Christine.

Turns out, the vendors this year have to man their booths until 10PM. Since she was going to be totally busy all weekend, with no chance to run out for dinner or drinks, Christine just ended up not telling folks – due to the hectic schedule. Luckily though, she wound up seeing a few folks randomly on Milwaukee last night, and ran into us today. 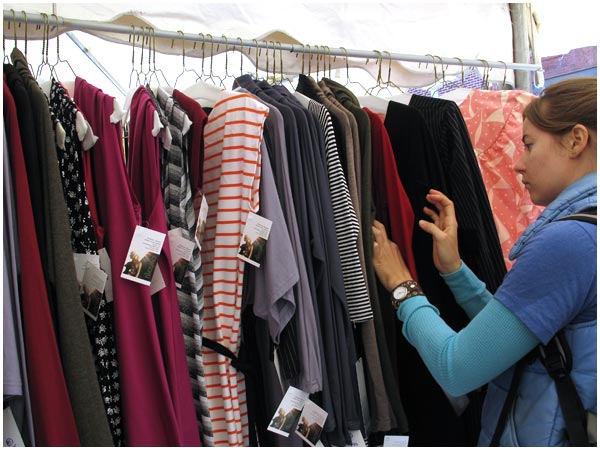 Some of Christine’s clothing on display. 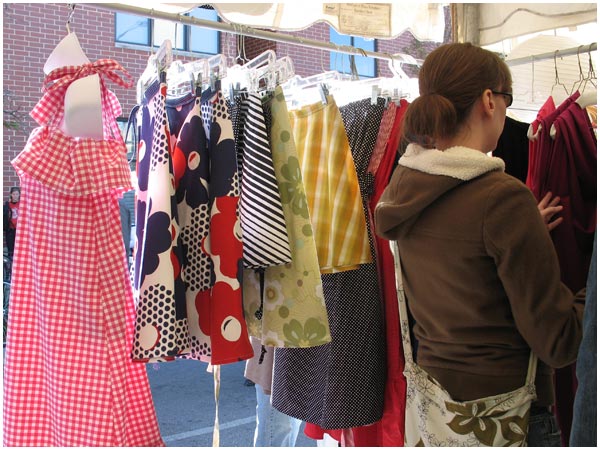 To see more of her work, check out Twospace.com. 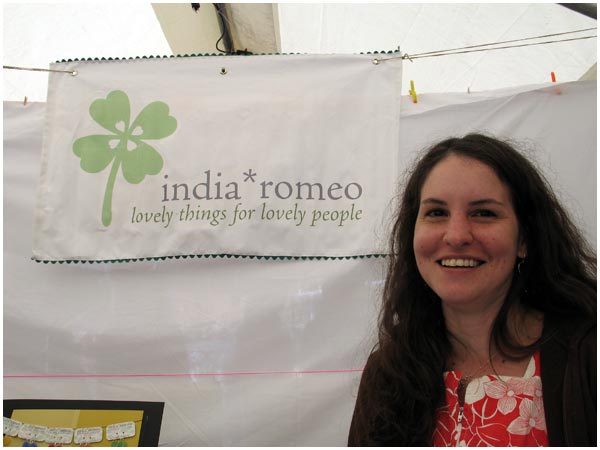 Of course, it was no surprise to see Ileana next door (representing india*romeo). Even though it’s usually only once a year, it was cool to see her again – and yet another reason I was bummed they didn’t have more time.

I was particularly touched to hear that Charles said hi. We met for the first time maybe two years ago, and had a really fun conversation about metal bands. I don’t think that I’ve seen him since that initial meeting, but each time I see Ileana, she tells me he says “hi.” 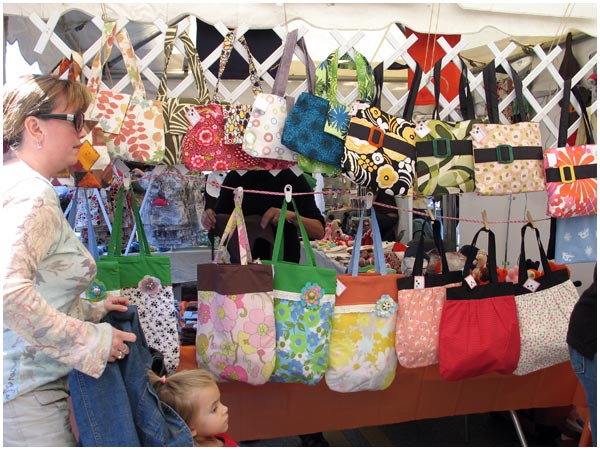 Some of Ileana’s work on display. 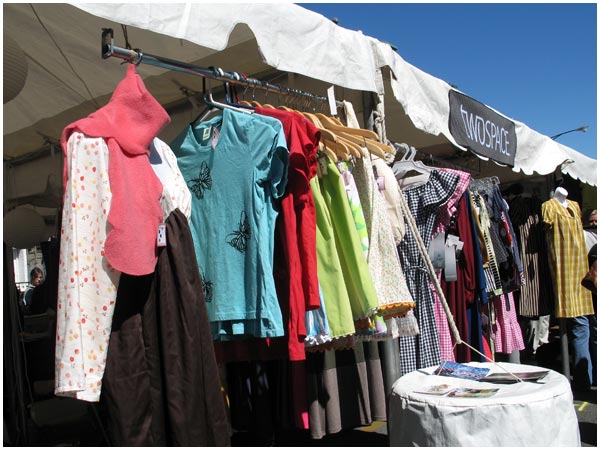 My photos aren’t doing her stuff justice. To see more, check out india*romeo. 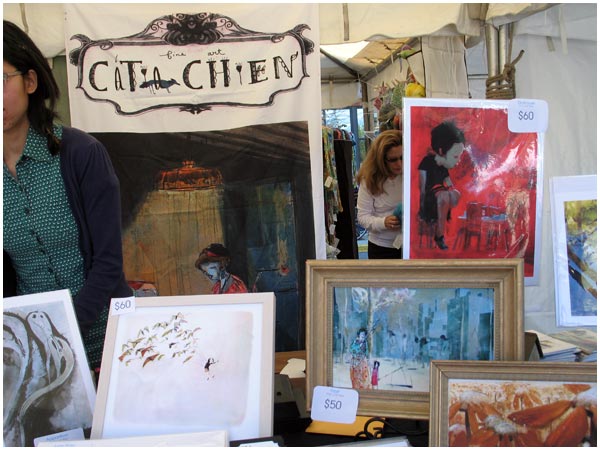 I felt a bit weird taking a photo her, as the artist kept looking over at me nervously (which I can understand). I liked the work I saw, and made sure to take one of her cards. Check out Catia Chien’s site. 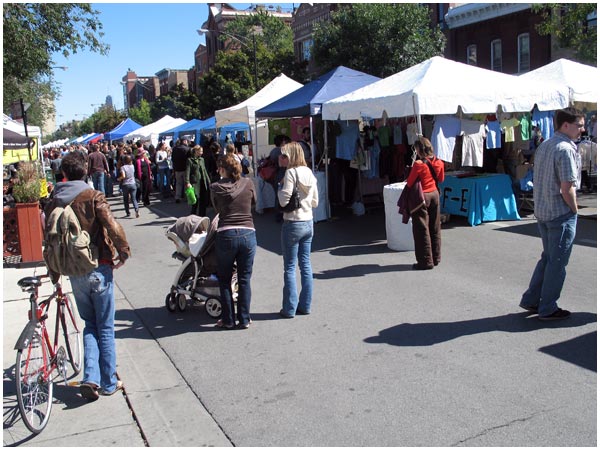 I stopped to get a shot of the fair, but it was difficult trying to capture just how big the thing was. The booths were set up next to one another, and it felt less like a market and more like a store.

It was an odd setup this year. I’m used to the park, and the feel of grass around. This year’s setup made things feel a lot more formal, a lot colder. But on the other side, there was more room in each booth, and I’m betting there was a ton more foot traffic. 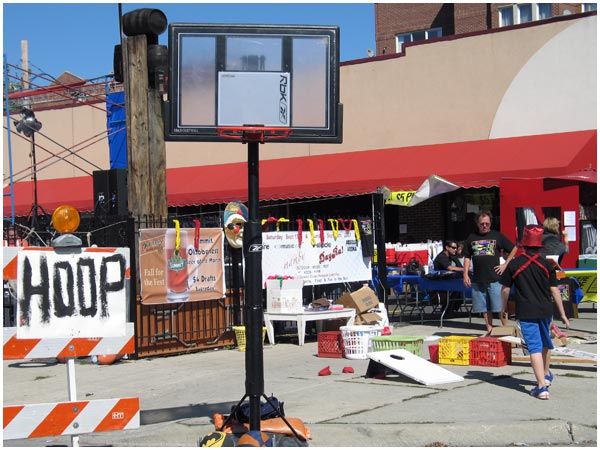 Over by Moonshine, I happened to see a basketball hoop set up. I didn’t think anything of it until I saw a kid walk by with a brightly colored tophat. 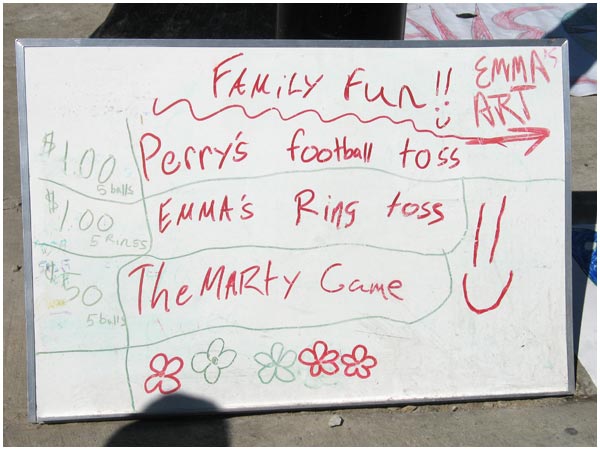 Not only was Marty (the young entrepreneur and inventor of The Marty Game) back… but he had friends in tow! Not content with offering up just one game of chance to the random passerby, he’s now got two coworkers. Perry apparently has a football toss game, Emma has a ring toss game. And a potential gallery in the works, showcasing Emma’s art was also available.

All I have to say is – look at these kids! Remember that lemonade stand you made with your brother? Yeah, that sucked. You’ve got nothing on Marty Enterprises, LLC. 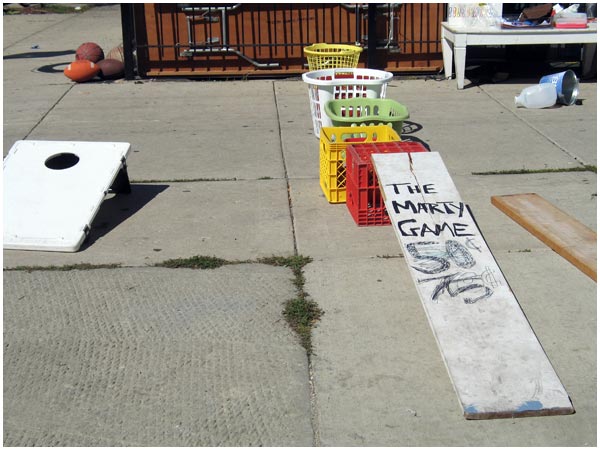 For those of you who didn’t see it last year, The Marty Game was one of my favorite booths of the Division festival. 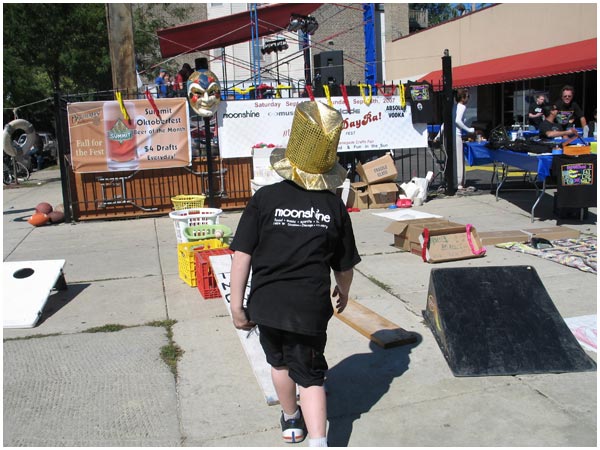 I couldn’t tell, but I think this is Marty. He’s grown! 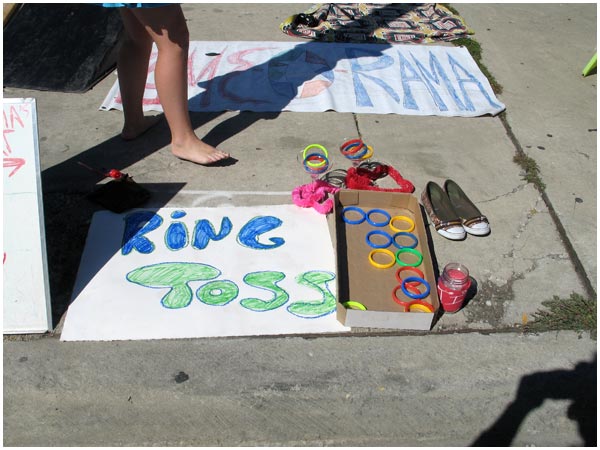 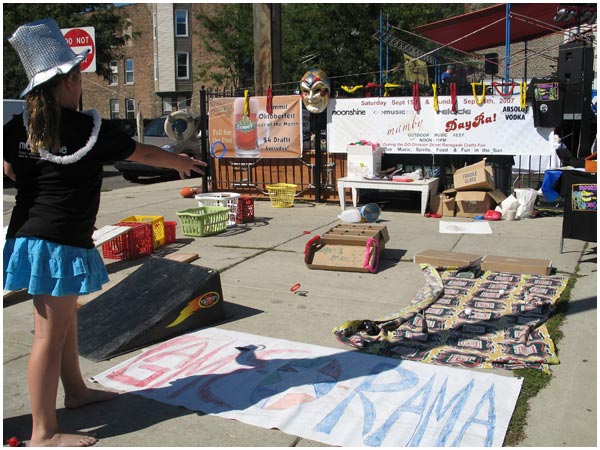 A Midway in the making.

One of the last booths we visited was Pink Loves Brown. I forgot that Nicole (who I worked with on building Literago) makes some great stuff (on top of being a great designer).