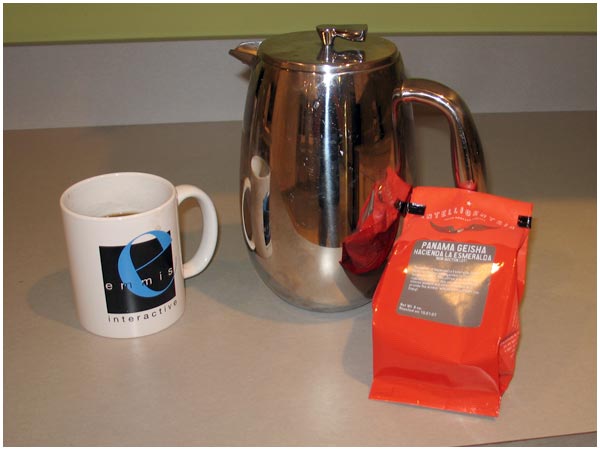 Today at work, I brought in the fancy Esmeralda beans that I got last night, at the Intelligentsia tasting for the most expensive coffee in the world.

My initial reactions that night were mild, and I was curious to both try the coffee again, and to see what my coworkers thought. To help prevent against bias, I didn’t tell them my reactions or my thoughts, and waited to hear from them first.

I used a french press to make the coffee, and (on accident) made it a bit stronger than I intended. Surprisingly, it turned out very well and I actually quite liked it.

Allison was able to note a lot of citrus tones, Bryan thought it was very smooth, and Chris (normally not a coffee drinker) also tried out a bit. More times than I can count, I heard the phrase “I don’t normally drink coffee black, but I can see drinking this black!”

I really liked the french press approach, and made another pot in the afternoon. While I don’t think I noticed the flavors as strongly as some of my coworkers, I could taste a bit more than I did yesterday. I do wonder if my taste buds are just not sensitive enough, as the same sort of thing happened when I tried Johnny Walker Blue.

A few other folks tried the coffee in the afternoon, with similar results: they loved the smell, and while not black coffee drinkers… said they could see drinking the Esmeralda straight up. I’ve got a bit more left, and am looking forward to brewing some up tomrrow morning. It’s been interesting drinking the Esmeralda, as I’m very consciously paying attention to my coffee, its flavor, all the stuff going on as I drink. It’s made me pay very close attention to a task that I do daily and, oftentimes, without even thinking.