Tonight, a bunch of folks were going to be in town for a variety of reasons. Stu was in from Portland, doing work for Third Coast. Alex was going to be in town to meet up with some folks at Intelligentsia (he ended up meeting Matt, which delights me to no end; something about two friends from two different spheres knowing one another is awesome). And of course, Justin has been in town for a little while (he’s heading off for a four-month trip to India in a few weeks, and is hanging around Chicago until his departure).

All of us also had tickets to see Dave’s show at Logan Square Auditorium, where he was opening for Jens Lekman. A big gathering of folks, many of whom are far from Chicago most days. 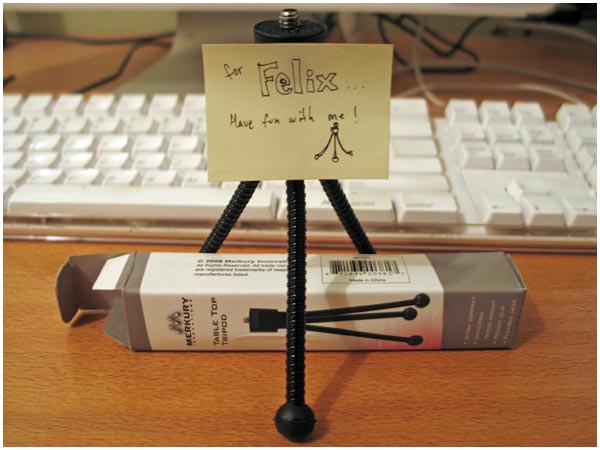 A bunch of us were talking via email prior to, and we decided to have a dinner over at our apartment. On arriving home, I found a nice little gift from Justin – a great, portable mini-tripod. 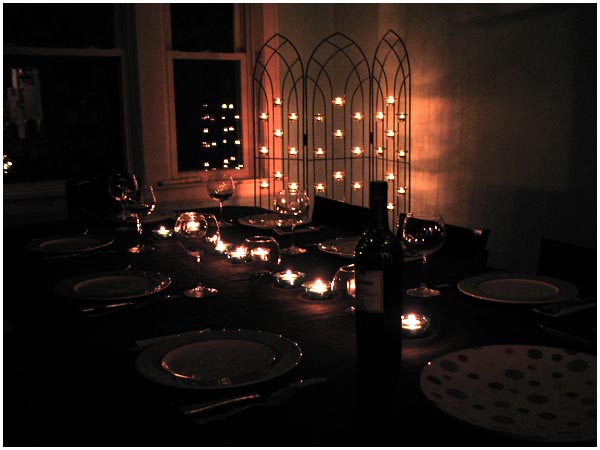 The dining room table, candlelit and all. The table itself is huge, and with the extra leaves… I think we can get up to 9 or 10 settings on the table.

We had a ton of folks over tonight: Justin, Alex, Stu, Gretchen, Ben, Kristin and Chris. There was a goodly amount of food (tons of salmon, sweet potato fries and spaghetti squash), a lot of wine, and we even broke out some of the scotch.

I was busy most of the evening with Liz, working away in the kitchen. So I didn’t take many pics at all (plus, it was pretty dark during the meal). To capture the evening, I used the mini-tripod from Justin, and took a little snippet of video. Nothing really significant happened, but I think this small bit of film captures the evening pretty well.