Since our department moved out into its own office, our holiday celebrations have also separated themselves some from the stations. In the past, us Interactive folks would celebrate along with the stations; but we’d also have our own gatherings and dinners.

It’s wild to think about, but about 5 years ago now… I sat down at a table with all the folks that comprised Emmis Interactive. We (along with our significant others) were small enough that we could all share a table.

Tonight, our holiday party was held at the Wild Hare on Clark. And with significant others, the total count was something like 92 people.

Ok. It’s a bad sign when you look over your photos from the evening… and right there near the start is an image of tequila shots.

I don’t know where all that tequila stuff started I guess, ever since we said goodbye to Justin, doing Tequila shots as a group has become this de-facto thing. Perhaps, at some future point, we can shift away from the tequila to… I dunno, ANYTHING else.

An interesting sidenote: there in the back, to the right of Allison, is our newest hire, Nick. He’s slated to start on Monday, but swung on by to join our little party. Shortly after introducing myself, I was doing a shot with him. So it goes. 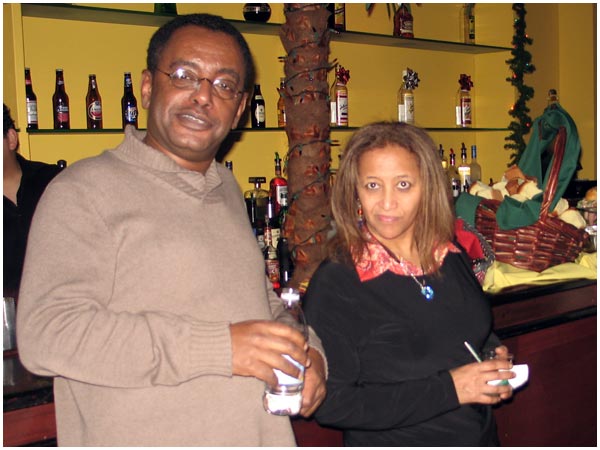 A shot of Mulu, with his wife. Mulu joined us about a year ago, and shortly thereafter… we all found out a little bit about his past. Until now, I don’t think I’ve ever mentioned it on the blog; but this entry is probably the best place for that revelation.

Sidenote 1: The bar where we were holding our holiday party was the Wild Hare. It’s Mulu’s bar (one that he owns/runs with his brother). 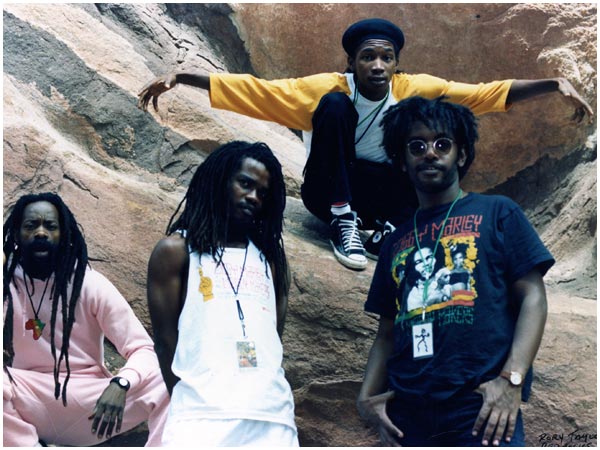 Sidenote 2: Mulu used to play guitar for Ziggy Marley, and was once upon a time a Melody Maker! That’d be him, on the right there, with the dreds. 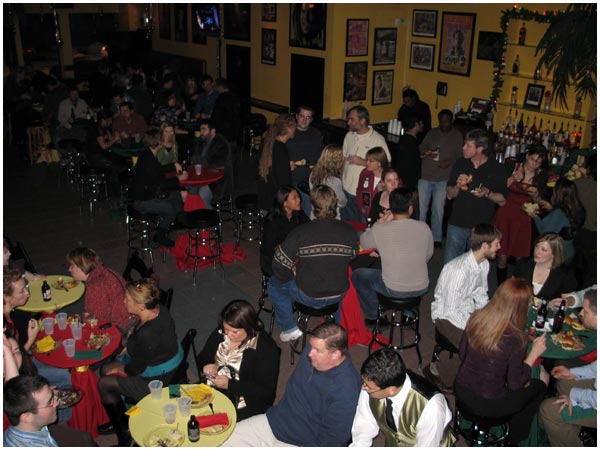 A shot from the stairs, looking down. 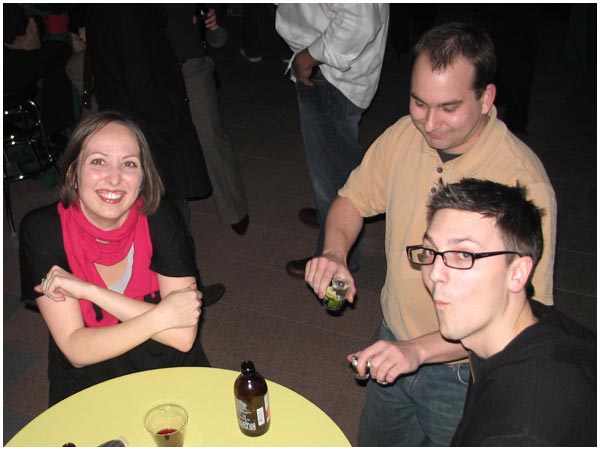 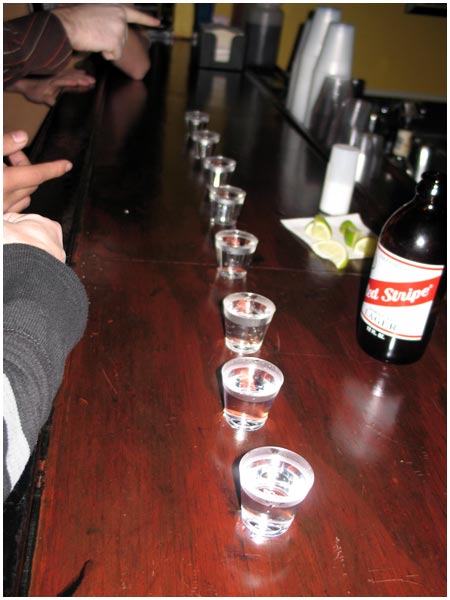 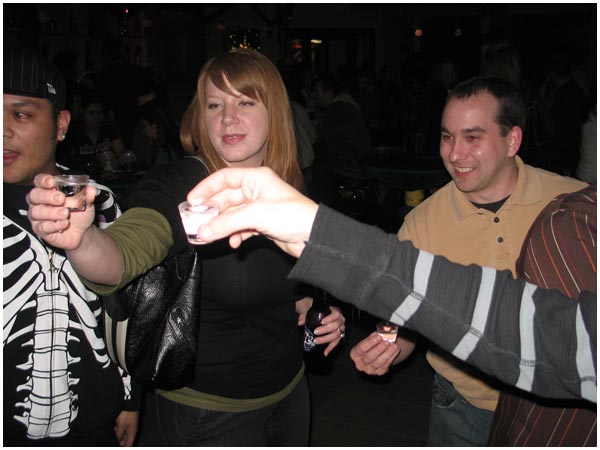 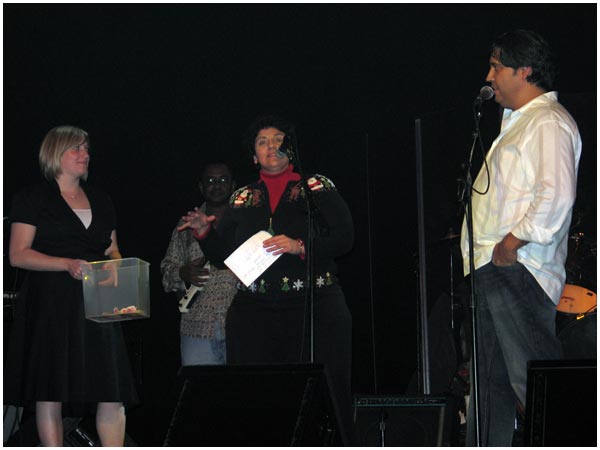 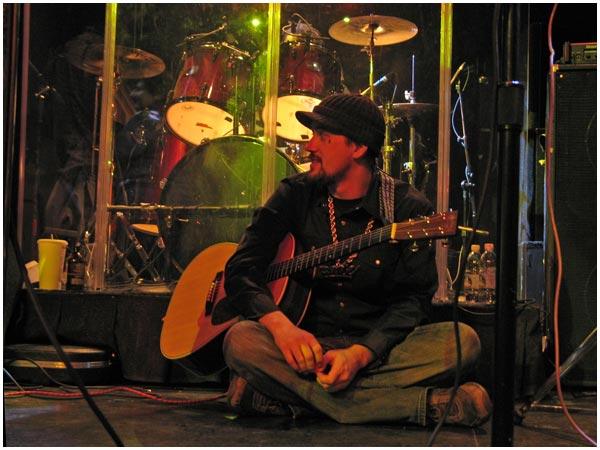 Ben, waiting on stage for his cue. I think it happened before Liz and I arrived, but he somehow got a “prison tear” tattoo. 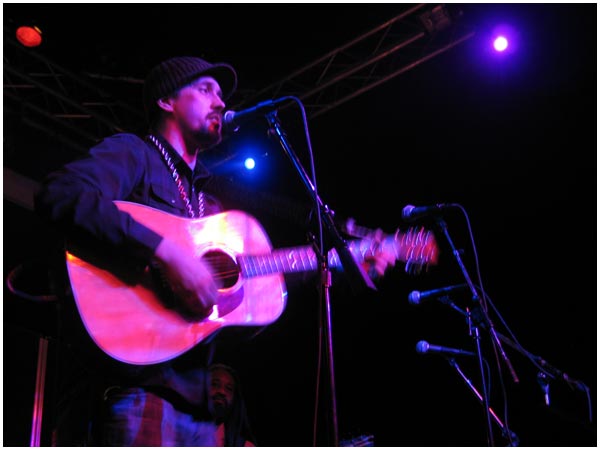 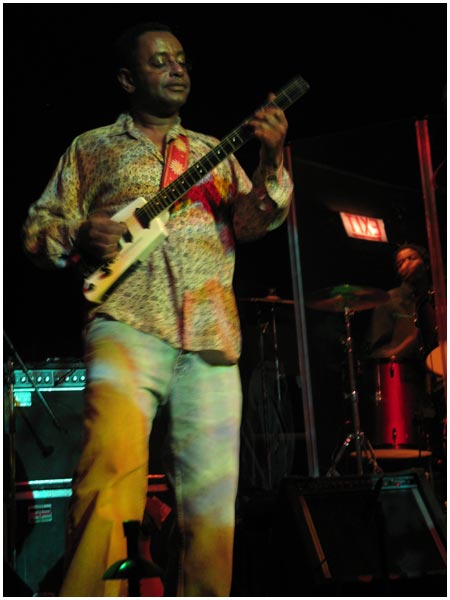 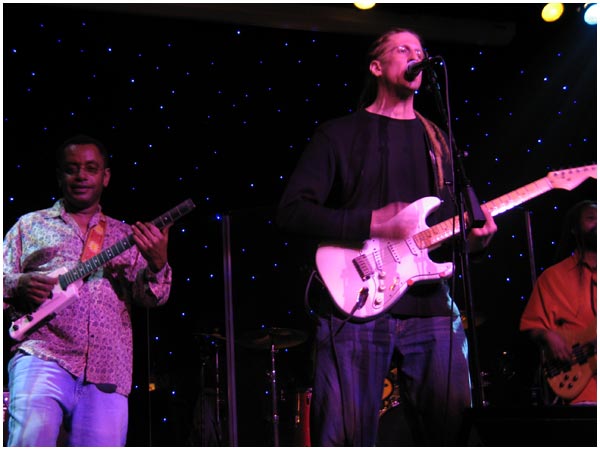 Matt, singing on stage with Mulu in the background. 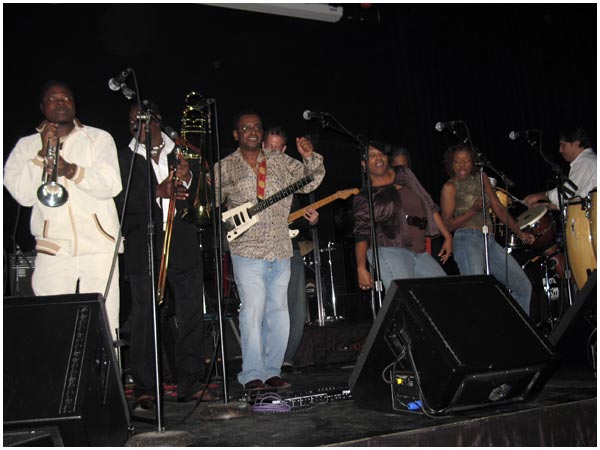 Mulu performing with his band, Barro. 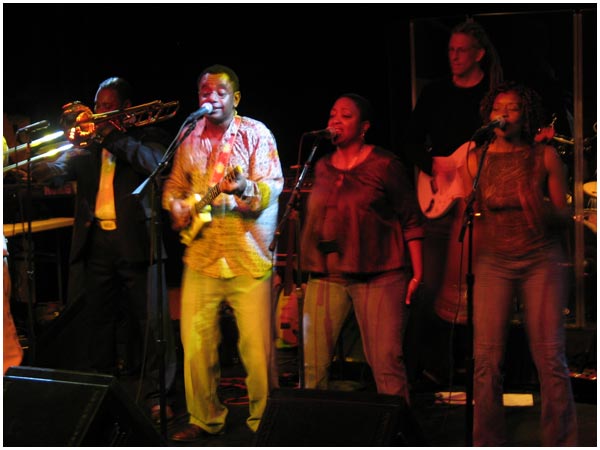 I have to say – I loved seeing Mulu on stage. This was an aspect of him that I had always heard about, but never witnessed. Great, great music! 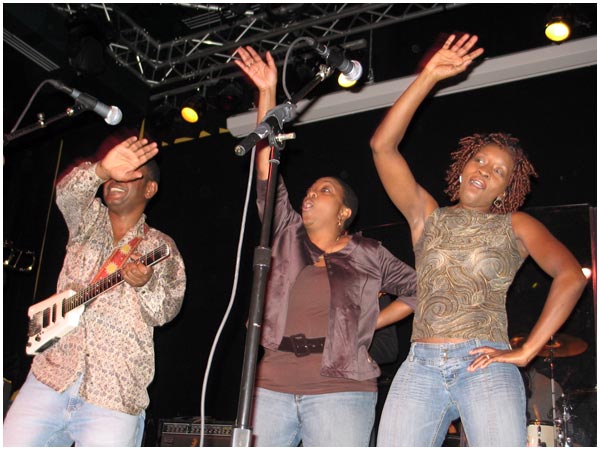 Getting the crowd into it… 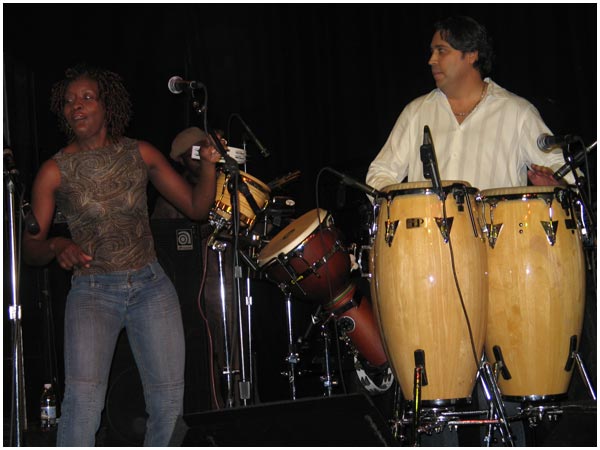 Rey on the congas. It’s been a while since I’ve seen Rey perform. If memory serves, I also saw him play congas when we were last in Mexico (but sadly, I haven’t gotten around to posting all the pics from that trip). 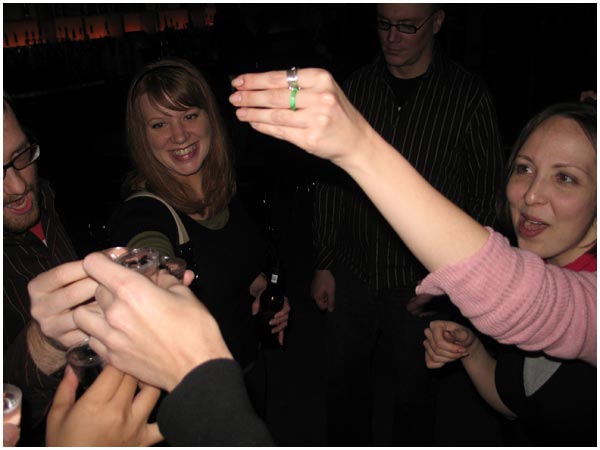 Aaaaand, another round of tequila. 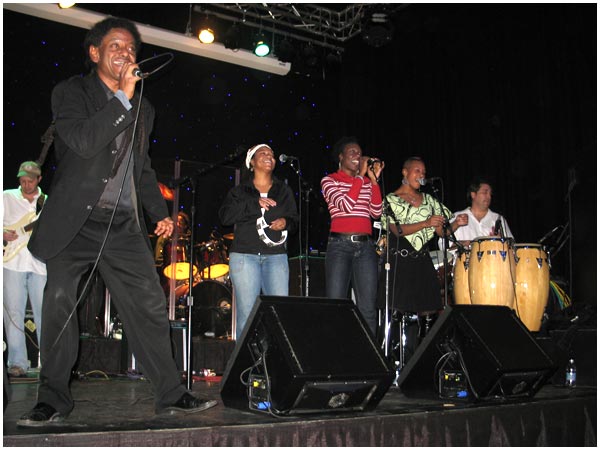 On the left, this is Mulu’s brother (and also co-owner of the the Wild Hare). I’m not 100%, but I believe his group is named Zeleke. 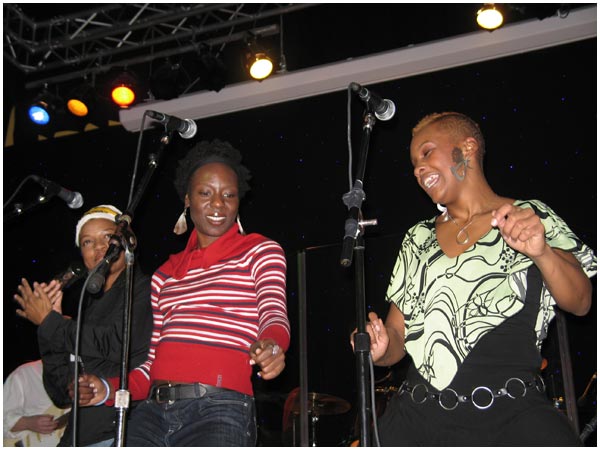 Detail view of the supporting singers, who were fantastic to watch as they sang and danced.

Sadly, none of my videos of Mulu’s brother’s group turned out all that well. I’ve got clips, but the bass was throwing off the audio on my camera… making a lot of my recordings unlistenable. 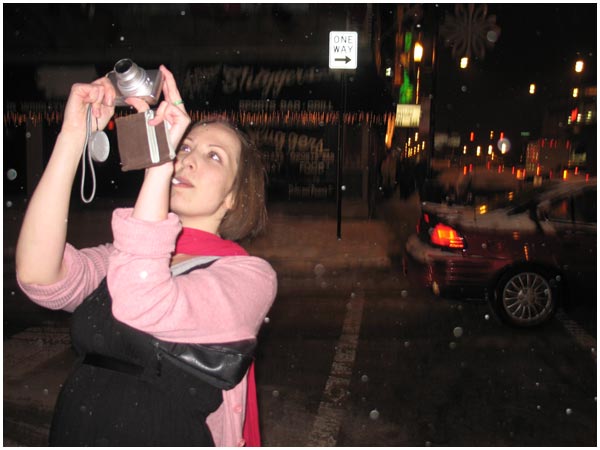 Outside the bar, there is a large video display – and Chris ended up making a little video to be displayed. Instead of a promo piece, he ended up stitching together a ton of various Internet memes, cycling through one after another. It was a blast to see this thing projected out on the street, right on Clark street where a ton of folks were walking by. 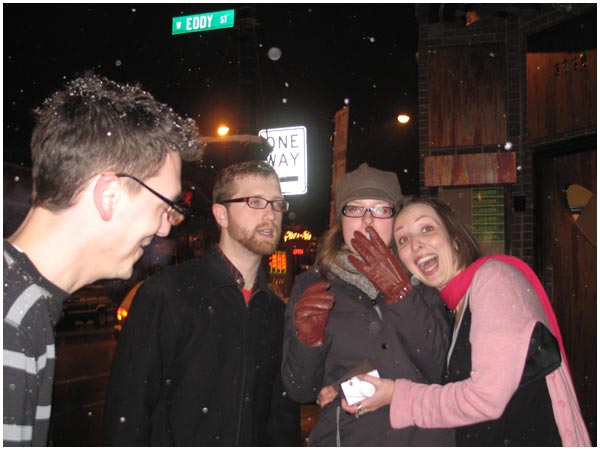 Group photo outside, with Leslie smoking. 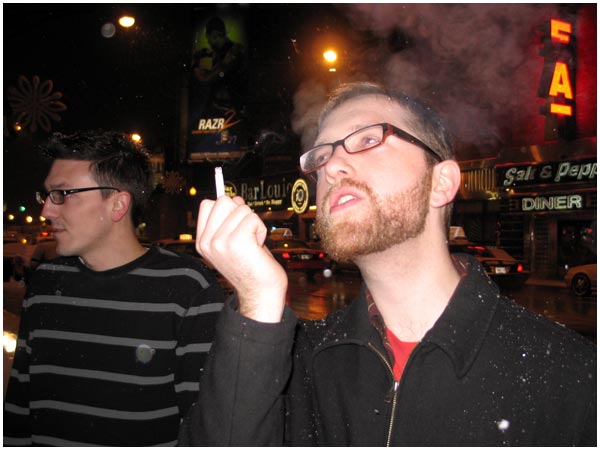 Chris, getting in on the smoking fun. 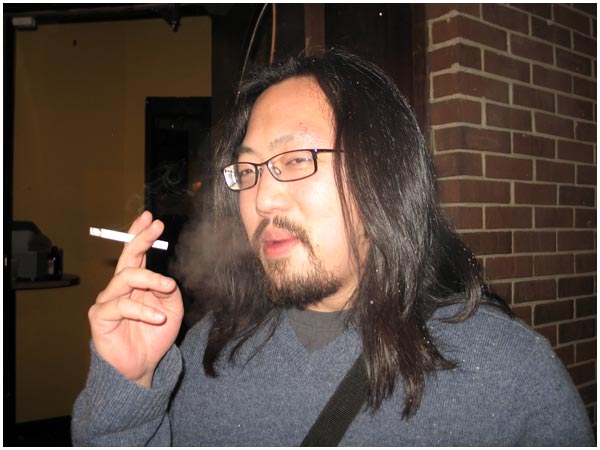 And me, smoking. Bet you didn’t see that one coming.

Yeah, first cigarette in 5 years, since I quit. I’ve had cigars and such since, but this was the first actual cigarette I smoked, since my departure from cigarettes. I had a lit cigarette in my mouth during Alex’s bachelor party… but never actually inhaled. Tonight though, you better believe I inhaled.

How was it, you ask? In a word: delicious. And in two words: incredibly delicious.

I’m glad I did it, finally, after having untold occasions where I kept thinking “gee, I’d like a cigarette.” But it also reminded me of what I didn’t miss – the smell on my clothes, the bad taste in the mouth. I’m glad to have tasted a cigarette again, but I have no designs to return to a life of smoking. It was nice to visit, but not planning on moving back thank you very much. 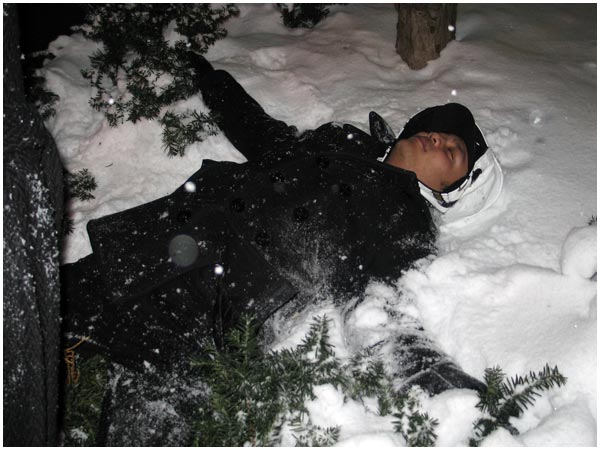 In the final moments of the night, I’m not sure if Bryan was pushed over or just fell over. Looking at how peaceful he appears, I don’t know that it matters all that much.

A fun evening, surrounded by a bunch of good people. It always amazes me how much I like my job, and my coworkers. And in talking with other people about their work, it always amazes me how many folks tend to dislike their workplace. Tonight was a grand celebration for all of us, and for all that’s been done – and for me, cause as well to remember how lucky I am, to work with all these fantastic, talented people. Yay us.