On the Way to Work: Six Heavily-Armed Asians 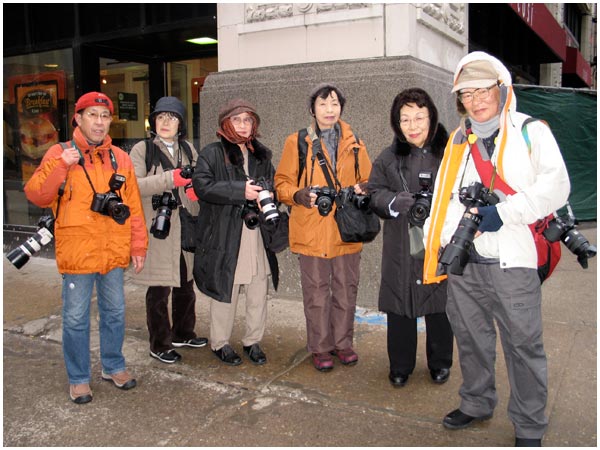 This morning, while walking to work, I stumbled across three asian tourists (the two women and the man on the right), standing at the corner of Jackson and Wabash. As I passed by, I noticed they were ARMED TO THE GILLS with cameras.

And not just regular ‘ol cameras. Fancy ones. The ones with humongo lenses that I only tend to see dangling from the necks of serious photojournalists.

On top of that, they each seemed to have more than one camera.

As I walked by, I turned around and decided to engage them in some conversation. My goal was to take a photo of them, with all their equipment.

I’ve long been familiar with the stereotype that asians (and asian tourists in particular) like taking a ton of photographs. In fact, in my attempts to veer away from that stereotype as a younger man… I avoided using a camera altogether. Which, in hindsight, was a terrible decision, as I have these gaps where I simply don’t have photographs of my friends. At times, I wonder if this blog compensates for that earlier decision.

But this? This was beyond my wildest stereotype fantasies. Not only were they quite obviously tourists, they were packing heat the likes of which I’ve just not see on your regular, run-of-the-mill tourist. I was both tickled and awed by the kind of gear they had on.

As I talked with them, it became very clear that there was a considerable language barrier. I asked if I could take their photo, and the man (on the far right) kept walking closer to me, as though proximity and volume were the reasons why he couldn’t understand me. Finally, I put down my coffee and my lunch, and took out my camera to show them.

At this point, they seemed to think I wanted to show them my camera… so all three of them came over to look into my bag. I pulled out my camera, and one of the women said “Ah, Canon!” They all then proceeded to point to their own cameras, which I believe were also Canons.

Finally, with some pointing, I got the message across that I wanted to take their photograph. They all seemed a bit puzzled by this, but pretty good natured about it as well. They backed up a bit. I backed up a bit.

And as I’m framing up the shot, three of their friends walked up and joined the group (the three on the left). Doubling in both people and camera gear, I was taken aback for a moment. I backed up some more, and tried to reframe things quickly.

All in all as a group, there were six people, with eleven cameras between them.

Initially, I was laughing a lot after this encounter. But the more I thought about it, the more I became awed at their very obvious interest in, and passion for, photography. When I showed this photo to Jane after arriving at work, she wondered what they planned to do with all the images they took. Photo albums? Blogs? Flickr?

I guess it’ll be one of those little mysteries that I’ll never know the answer to.

They were a really nice group, and were really polite despite my intrusiveness. As I left, I told them “Welcome to Chicago!” And I genuinely meant it. I hope they all get a ton of great photographs.